+1 point
Thank you for your contribution! You can also upload a video entry related to this topic through the link below: https://encyclopedia.pub/user/video_add?id=22658
Check Note
2000/2000
Green Finance of Chinese Commercial Banks

According to the Statistical Review of World Energy (70th edition) released by BP, by 2020 China’s carbon emissions will account for 30.3% of the global total [1]. The success or failure of China’s energy conservation and emission reduction projects will affect the overall global carbon neutrality. On the other hand, environmental problems are difficult for many developing countries in the world to avoid during their development process. As a developing country with a huge economic volume, how China realizes green, low-carbon, and circular development will provide a model for the economic transformation of the latecomers. Some scholars estimate that in order to achieve the goal of “carbon peak”, the whole country needs to invest an additional CNY 3–4 trillion every year, with the fiscal revenue only meeting 10–15% of the capital gap [2][3], and investments should mainly rely on social financing. By the end of 2020, bank credit financing still accounted for 61% of total social financing. Therefore, green credit is the most important force affecting green finance in China. In fact, CIB Research estimates that green credit accounts for more than 90% of all green financing. (As of the first half of 2019, the green credit balance of China’s 21 major banks was CNY 10.6 trillion, and the balance of domestic green bonds was only CNY 708.78 billion. The bank mainly issued green financial bond funds to issue green credit. Excluding the green financial bonds, the balance of the non-financial enterprise green bonds was only CNY 293.96 billion, less than 3% of the green credit scale. The balances of the other green financing scales were smaller. (Source: http://greenfinance.xinhua08.com/a/20191227/1905011.shtml (accessed on 16 March 2022))). On the other hand, since the beginning of the 21st century, China has faced the problem of environmental pollution during the process of the country’s development. The government has always emphasized environmental protection and sustainable development and has frequently introduced policies for industrial structure adjustments, but these policies have always achieved poor results [4][5][6][7]. In essence, the massive development of high energy consumption and heavy-pollution industries has benefited from large inflows of credit funds (based on the bank loan data of the listed enterprises, Liu Xiliang and Wen Shuyang (2019) also found that “six of the top ten industries with the amount of credit are highly polluting industries, and the average emission of the top ten industries with the amount of loan is about twice that of other industries”) [8][9]. The unbalanced allocation of credit resources objectively promotes the continuous expansion of industries with high rates of energy consumption and pollution and aggravates the environmental pollution and environmental costs incurred on the path towards economic growth. Therefore, the environmental problems caused by the industrial structure [10][11] can be attributed to the “financial mismatch” status of credit resources.
Therefore, green development must rely on optimizing the function of the financial allocation of resources, and green credit will be the most key link. In fact, the Chinese government has taken full action. For example, financial institutions, especially commercial banks, are asked to disclose environmental information, with banking financial institutions being required to regularly disclose financial information on their social and environmental responsibilities and on their support for energy conservation and emission reduction as well as to constantly refine their statistical standards for green credit information. In terms of financial discounts for eligible green credit, green credit and green bonds should become eligible collateral for re-lending by commercial banks. Local governments are also rolling out policies to support green finance. For example, Zhejiang province took the lead by issuing the Guiding Opinions on Financial Support to Achieve Peak Carbon Neutrality, established a positive list of credit supports for green and low-carbon development, and set up “zero carbon” pilot units and low-carbon industrial parks. In addition, a series of measures have been introduced, such as setting up carbon accounts for key enterprises and public institutions with carbon emissions and fostering regional environmental rights trading markets. Since 2016, Xiamen has offered different degrees of incentives, loan discounts, and risk-sharing compensation to the financial industry based on the scale of green credit.
The essence of green credit is to solve the externalities of the environment and finance for the green transformation of the economy. Its role in environmental protection is self-evident, and the relevant economic research focuses more on the market mechanism of green credit. In the short term, green development policies will have a certain impact on the national economy, especially in some traditional industries with high levels of pollution and energy consumption. For developing countries, such industries are the pillar of their national economy in the early stages of development. Additionally, the role of green credit through financial leverage has further increased the influence of this impact. On the other hand, the global economy is under downward pressure due to the impact of COVID-19, while it is also being buffeted by various extreme events that have severely affected financial stability.

2. Related Content of Green Finance in Line with the Long-Term Market Mechanism

3. Financial Comparison between “Green” and “Two High and One Surplus”Enterprises

The main purpose of green credit policies is not only to increase the proportion of credit for green projects, but also to reduce the loans to “Two High and One Surplus” enterprises. Changing the credit structure of commercial banks is reflected in the proportion of these two types of corporate loans. Financial analysis is the most important link in the loan approval process of commercial banks. According to the financial analysis , it was found that, compared to the “Two High and One Surplus” industries, the environmental protection industry is better, but its financing costs are high (Figures 1-3). 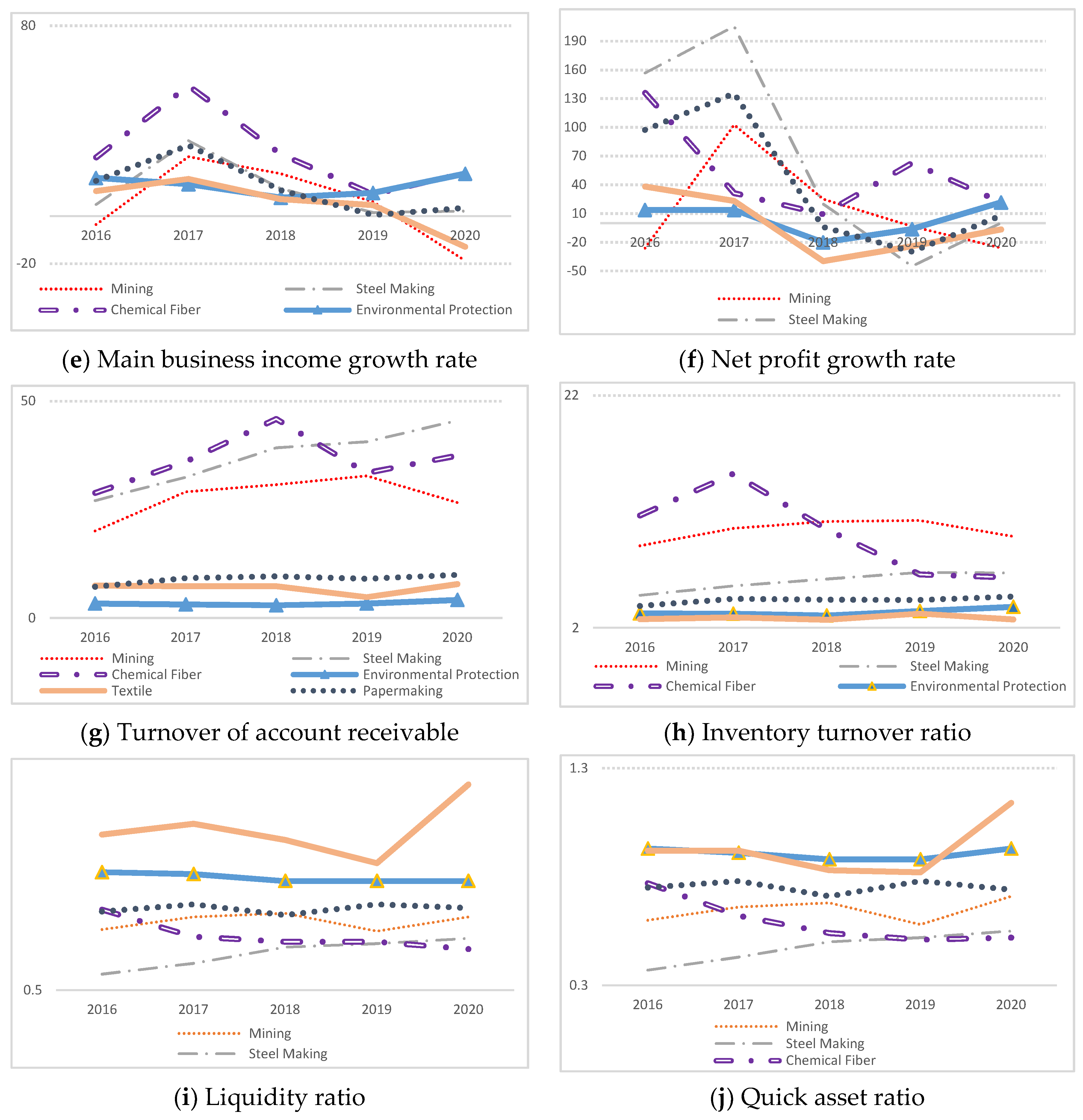 Figure 1. Financial comparison between green industries and the “Two High and One Surplus” industries. 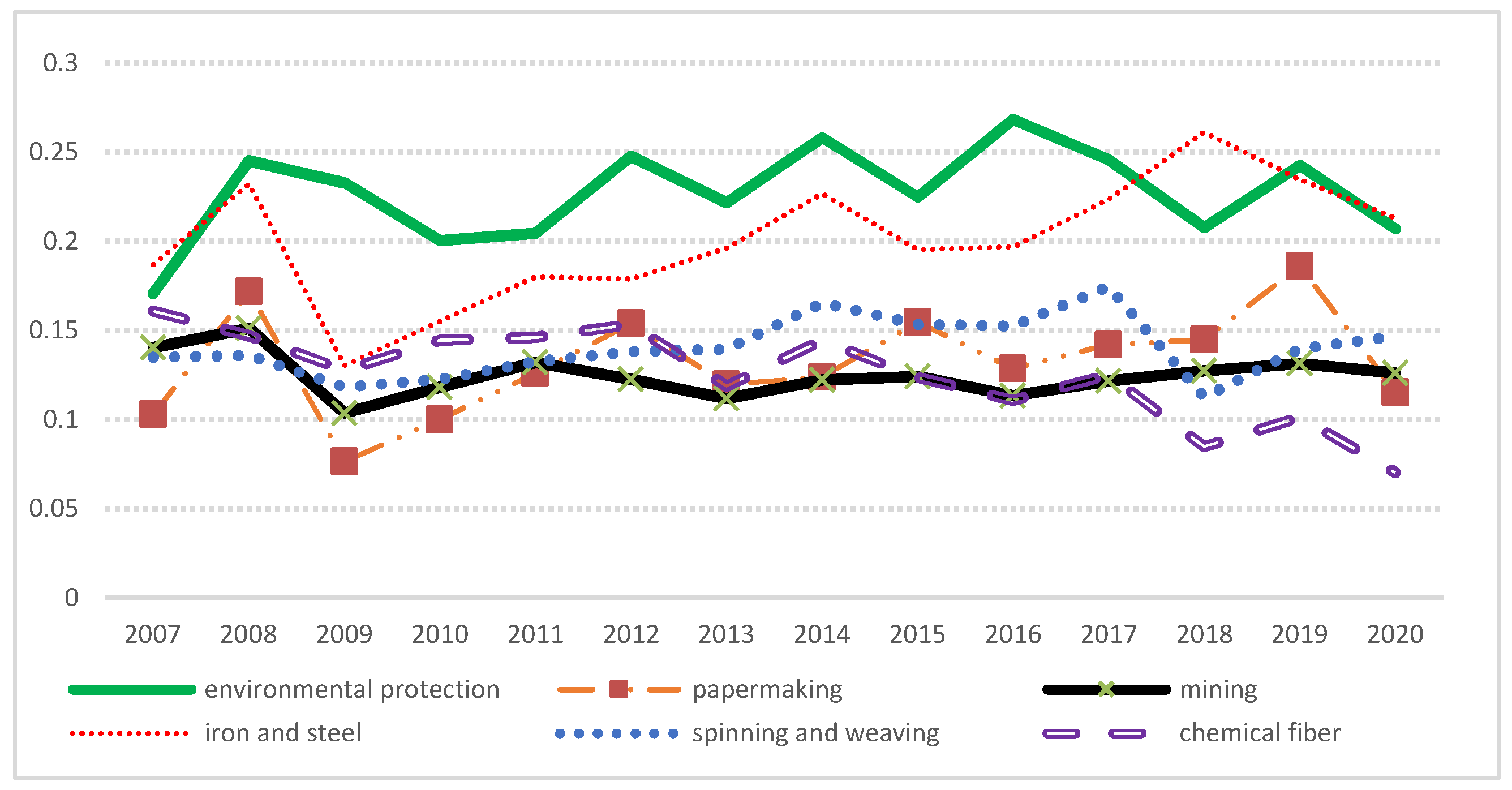 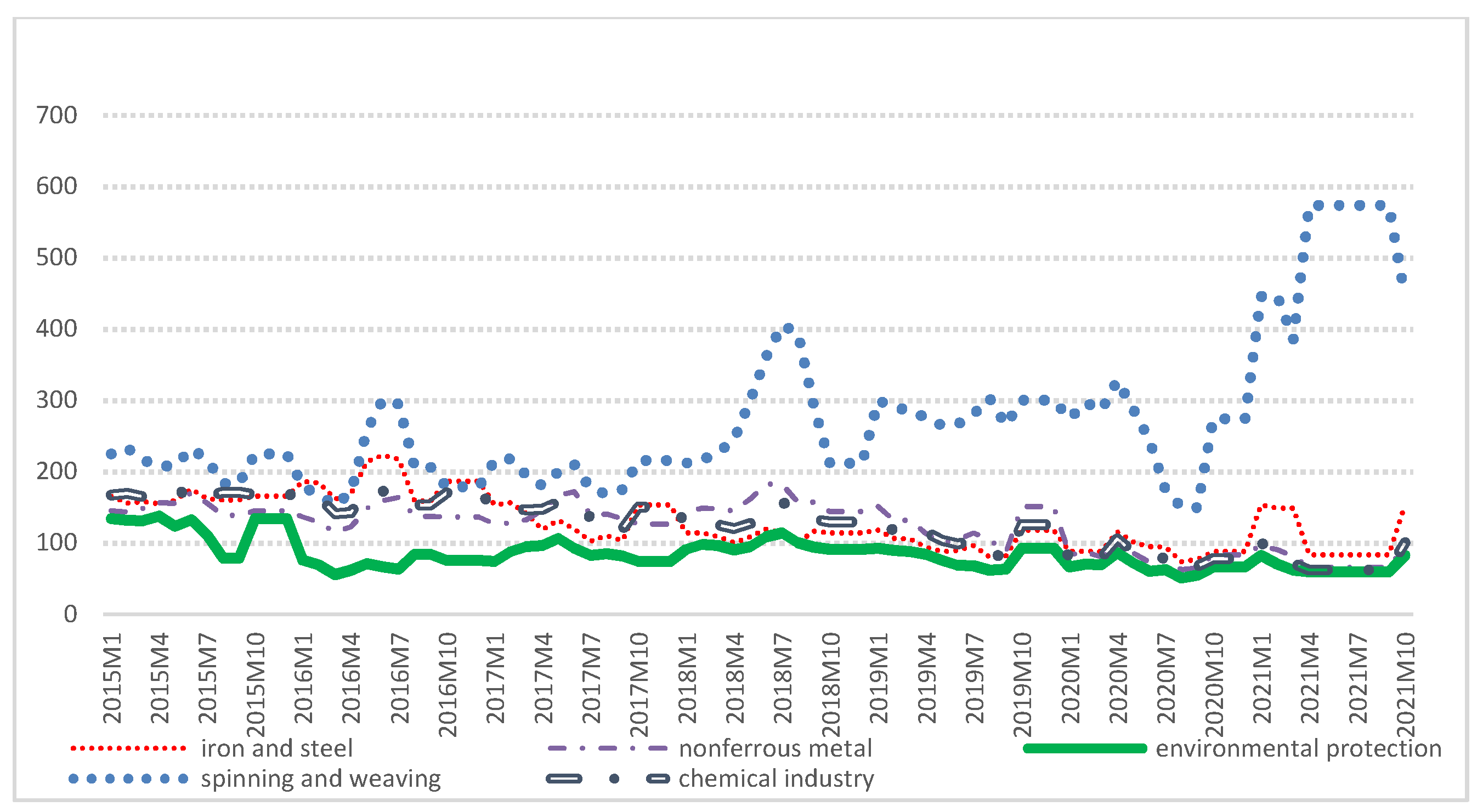 Section 5 analyzes the allocation efficiency of the internal resources of commercial banks from the perspective of input–output efficiency to prepare for the fourth part of the research. In terms of methods, an SBM-DEA model containing undesirable output (the non-performing loan ratio) was established, and the weights of the output variables were innovatively and dynamically coordinated. The results (Figure 4) show that the efficiency measurements for China's commercial banks largely conform to the economic reality, and the analysis of the slack variables effectively revealed the main reasons for the changes in the operating efficiency of commercial banks at various stages. 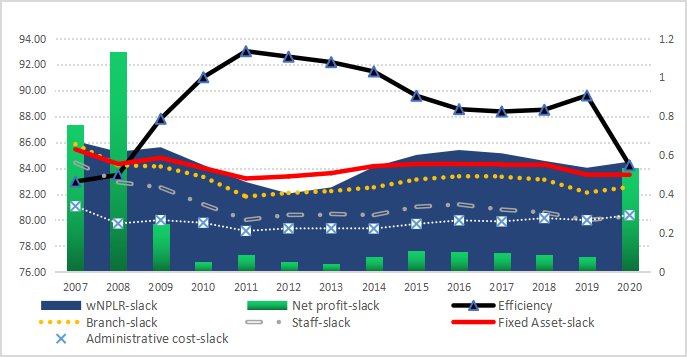 More
© Text is available under the terms and conditions of the Creative Commons Attribution (CC BY) license; additional terms may apply. By using this site, you agree to the Terms and Conditions and Privacy Policy.
Upload a video for this entry
Information
Subjects: Business, Finance
Contributors MDPI registered users' name will be linked to their SciProfiles pages. To register with us, please refer to https://encyclopedia.pub/register :
Kai Zhang
,
Xinmiao Zhou
View Times: 155
Entry Collection: Environmental Sciences
Revisions: 3 times (View History)
Update Date: 11 May 2022
Table of Contents
1000/1000
Hot Most Recent