+1 point
Thank you for your contribution! You can also upload a video entry related to this topic through the link below: https://encyclopedia.pub/user/video_add?id=36284
Check Note
2000/2000
Electromigration

Edit
Upload a video
The content is sourced from: https://handwiki.org/wiki/Chemistry:Electromigration

Electromigration is the transport of material caused by the gradual movement of the ions in a conductor due to the momentum transfer between conducting electrons and diffusing metal atoms. The effect is important in applications where high direct current densities are used, such as in microelectronics and related structures. As the structure size in electronics such as integrated circuits (ICs) decreases, the practical significance of this effect increases.

The phenomenon of electromigration has been known for over 100 years, having been discovered by the French scientist Gerardin.[1] The topic first became of practical interest during the late 1960s when packaged ICs first appeared. The earliest commercially available ICs failed in a mere three weeks of use from runaway electromigration, which led to a major industry effort to correct this problem. The first observation of electromigration in thin films was made by I. Blech.[2] Research in this field was pioneered by a number of investigators throughout the fledgling semiconductor industry. One of the most important engineering studies was performed by Jim Black of Motorola, after whom Black's equation is named.[3] At the time, the metal interconnects in ICs were still about 10 micrometres wide. Currently interconnects are only hundreds to tens of nanometers in width, making research in electromigration increasingly important. 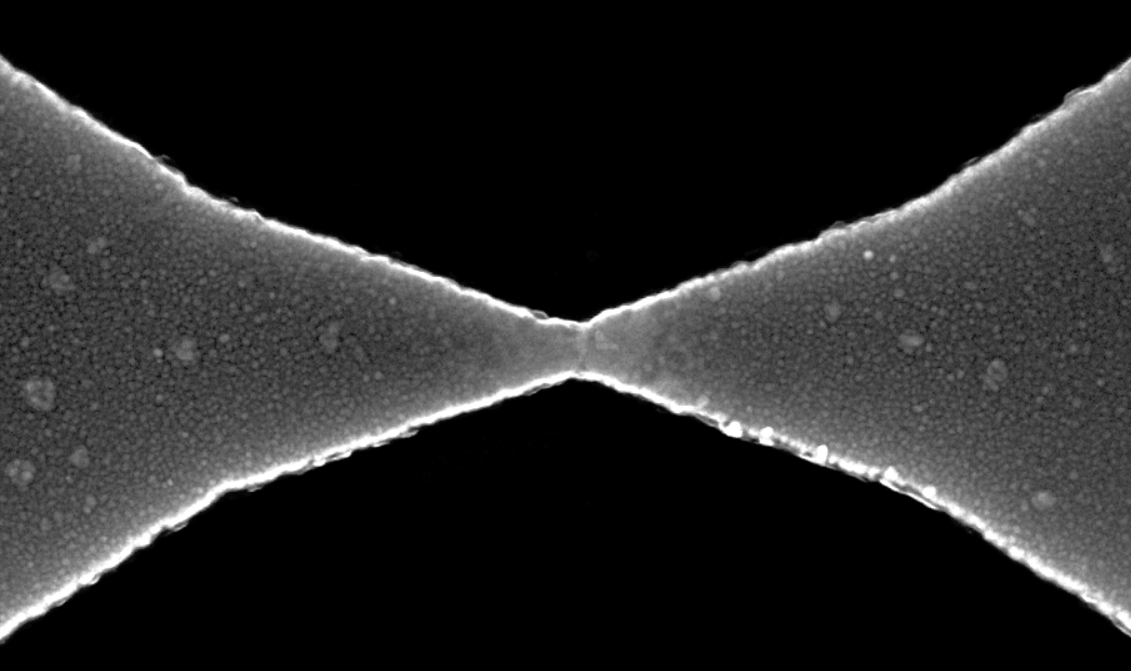 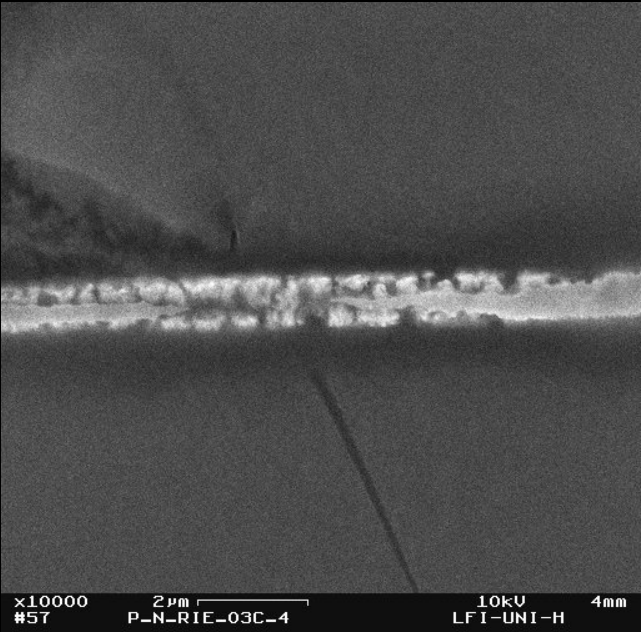 SEM image of a failure caused by electromigration in a copper interconnect. The passivation has been removed by reactive ion etching and hydrofluoric acid. https://handwiki.org/wiki/index.php?curid=1857574

Electromigration decreases the reliability of integrated circuits (ICs). It can cause the eventual loss of connections or failure of a circuit. Since reliability is critically important for space travel, military purposes, anti-lock braking systems, medical equipment like Automated External Defibrillators and is even important for personal computers or home entertainment systems, the reliability of chips (ICs) is a major focus of research efforts.

Although electromigration damage ultimately results in failure of the affected IC, the first symptoms are intermittent glitches, and are quite challenging to diagnose. As some interconnects fail before others, the circuit exhibits seemingly random errors, which may be indistinguishable from other failure mechanisms (such as electrostatic discharge damage). In a laboratory setting, electromigration failure is readily imaged with an electron microscope, as interconnect erosion leaves telltale visual markers on the metal layers of the IC.

With increasing miniaturization, the probability of failure due to electromigration increases in VLSI and ULSI circuits because both the power density and the current density increase.[5] Specifically, line widths will continue to decrease over time, as will wire cross-sectional areas. Currents are also reduced due to lower supply voltages and shrinking gate capacitances.[5] However, as current reduction is constrained by increasing frequencies, the more marked decrease in cross-sectional areas (compared to current reduction) will give rise to increased current densities in ICs going forward.[6]

In advanced semiconductor manufacturing processes, copper has replaced aluminium as the interconnect material of choice. Despite its greater fragility in the fabrication process, copper is preferred for its superior conductivity. It is also intrinsically less susceptible to electromigration. However, electromigration (EM) continues to be an ever-present challenge to device fabrication, and therefore the EM research for copper interconnects is ongoing (though a relatively new field).[6]

In modern consumer electronic devices, ICs rarely fail due to electromigration effects. This is because proper semiconductor design practices incorporate the effects of electromigration into the IC's layout.[6] Nearly all IC design houses use automated EDA tools to check and correct electromigration problems at the transistor layout-level. When operated within the manufacturer's specified temperature and voltage range, a properly designed IC device is more likely to fail from other (environmental) causes, such as cumulative damage from gamma-ray bombardment.

Nevertheless, there have been documented cases of product failures due to electromigration. In the late 1980s, one line of Western Digital's desktop drives suffered widespread, predictable failure 12–18 months after field usage. Using forensic analysis of the returned bad units, engineers identified improper design-rules in a third-party supplier's IC controller. By replacing the bad component with that of a different supplier, WD was able to correct the flaw, but not before significant damage to the company's reputation.

Electromigration due to poor fabrication processes was a significant cause of IC failures on Commodore's home computers during the 1980s. During 1983, the Commodore 64 computer for a time had a nearly 50% customer return rate.

Electromigration can be a cause of degradation in some power semiconductor devices such as low voltage power MOSFETs, in which the lateral current through the source contact metallisation (often aluminium) can reach the critical current densities during overload conditions. The degradation of the aluminium layer causes an increase in on-state resistance, and can eventually lead to complete failure.

The material properties of the metal interconnects have a strong influence on the life span. The characteristics are predominantly the composition of the metal alloy and the dimensions of the conductor. The shape of the conductor, the crystallographic orientation of the grains in the metal, procedures for the layer deposition, heat treatment or annealing, characteristics of the passivation and the interface to other materials also affect the durability of the interconnects. There are also important differences with time dependent current: direct current or different alternating current waveforms cause different effects.

Forces on Ions in an Electrical Field

In an ideal conductor, where atoms are arranged in a perfect lattice structure, the electrons moving through it would experience no collisions and electromigration would not occur. In real conductors, defects in the lattice structure and the random thermal vibration of the atoms about their positions causes electrons to collide with the atoms and scatter, which is the source of electrical resistance (at least in metals; see electrical conduction). Normally, the amount of momentum imparted by the relatively low-mass electrons is not enough to permanently displace the atoms. However, in high-power situations (such as with the increasing current draw and decreasing wire sizes in modern VLSI microprocessors), if many electrons bombard the atoms with enough force to become significant, this will accelerate the process of electromigration by causing the atoms of the conductor to vibrate further from their ideal lattice positions, increasing the amount of electron scattering. High current density increases the number of electrons scattering against the atoms of the conductor, and hence the speed at which those atoms are displaced.

In integrated circuits, electromigration does not occur in semiconductors directly, but in the metal interconnects deposited onto them (see semiconductor device fabrication).

Electromigration is exacerbated by high current densities and the Joule heating of the conductor (see electrical resistance), and can lead to eventual failure of electrical components. Localized increase of current density is known as current crowding.

A governing equation which describes the atom concentration evolution throughout some interconnect segment, is the conventional mass balance (continuity) equation

To define the fluxes mentioned above:

At the end of the 1960s J. R. Black developed an empirical model to estimate the MTTF (mean time to failure) of a wire, taking electromigration into consideration. Since then, the formula has gained popularity in the semiconductor industry:[3][8]

Historically, aluminium has been used as conductor in integrated circuits, due to its good adherence to substrate, good conductivity, and ability to form ohmic contacts with silicon.[5] However, pure aluminium is susceptible to electromigration. Research shows that adding 2-4% of copper to aluminium increases resistance to electromigration about 50 times. The effect is attributed to the grain boundary segregation of copper, which greatly inhibits the diffusion of aluminium atoms across grain boundaries.[9]

Pure copper wires can withstand approximately five times more current density than aluminum wires while maintaining similar reliability requirements.[10] This is mainly due to the higher electromigration activation energy levels of copper, caused by its superior electrical and thermal conductivity as well as its higher melting point. Further improvements can be achieved by alloying copper with about 1% palladium which inhibits diffusion of copper atoms along grain boundaries in the same way as the addition of copper to aluminium interconnect.

A wider wire results in smaller current density and, hence, less likelihood of electromigration. Also, the metal grain size has influence; the smaller grains, the more grain boundaries and the higher likelihood of electromigration effects. However, if you reduce wire width to below the average grain size of the wire material, grain boundaries become "crosswise", more or less perpendicular to the length of the wire. The resulting structure resembles the joints in a stalk of bamboo. With such a structure, the resistance to electromigration increases, despite an increase in current density. This apparent contradiction is caused by the perpendicular position of the grain boundaries; the boundary diffusion factor is excluded, and material transport is correspondingly reduced.[10][11]

However, the maximum wire width possible for a bamboo structure is usually too narrow for signal lines of large-magnitude currents in analog circuits or for power supply lines. In these circumstances, slotted wires are often used, whereby rectangular holes are carved in the wires. Here, the widths of the individual metal structures in between the slots lie within the area of a bamboo structure, while the resulting total width of all the metal structures meets power requirements.[10][11]

There is a lower limit for the length of the interconnect that will allow higher current carrying capability. It is known as "Blech length".[2] Any wire that has a length below this limit will have a stretched limit for electromigration. Here, a mechanical stress buildup causes an atom back flow process which reduces or even compensates the effective material flow towards the anode. The Blech length must be considered when designing test structures to evaluate electromigration. This minimum length is typically some tens of microns for chip traces, and interconnections shorter than this are sometimes referred to as 'electromigration immortal'.

5.5. Via Arrangements and Corner Bends

Particular attention must be paid to vias and contact holes. The current carrying capacity of a via is much less than a metallic wire of same length. Hence multiple vias are often used, whereby the geometry of the via array is very significant: multiple vias must be organized such that the resulting current is distributed as evenly as possible through all the vias.

Attention must also be paid to bends in interconnects. In particular, 90-degree corner bends must be avoided, since the current density in such bends is significantly higher than that in oblique angles (e.g., 135 degrees).[10]

5.8. Electromigration Due to IR Drop Noise of the On-Chip Power Grid Network/Interconnect

Electromigrated Nanogaps have shown great promise as electrodes in use in molecular scale electronics.[18] Researchers have used feedback controlled electromigration to investigate the magnetoresistance of a quantum spin valve.

More
©Text is available under the terms and conditions of the Creative Commons-Attribution ShareAlike (CC BY-SA) license; additional terms may apply. By using this site, you agree to the Terms and Conditions and Privacy Policy.
Upload a video for this entry
Information
Subjects: Others
Contributor MDPI registered users' name will be linked to their SciProfiles pages. To register with us, please refer to https://encyclopedia.pub/register :
HandWiki
View Times: 7
Entry Collection: HandWiki
Revision: 1 time (View History)
Update Time: 24 Nov 2022
Table of Contents
1000/1000
Hot Most Recent