Submitted Successfully!
Thank you for your contribution! You can also upload a video entry related to this topic through the link below:
https://encyclopedia.pub/user/video_add?id=23692
Check Note
2000/2000
Fundamentals of Chlorine Disinfection
Edit
Upload a video
This entry is adapted from 10.3390/antibiotics11050564

Chlorine first reacts with organic and inorganic matters before pathogens inactivation. The amount of chlorine consumed in this process is termed chlorine demand. The combined chlorine that forms together with any free available chlorine in the water is called the chlorine residual. This is the component of the added chlorine that disinfects the water. Free available chlorine is formed by differences in the concentrations of hypochlorous and hypochlorite ions, a process that depends on the pH of the water. Even though the chlorination procedure is well-researched, establishing an appropriate chlorine dose remains a difficult task for many field applications. Nevertheless, the effective chlorine dose should be sufficient to destroy pathogens and oxidize the organic contaminants as well as maintain sufficient free available chlorine in the water distribution system, post-chlorination. 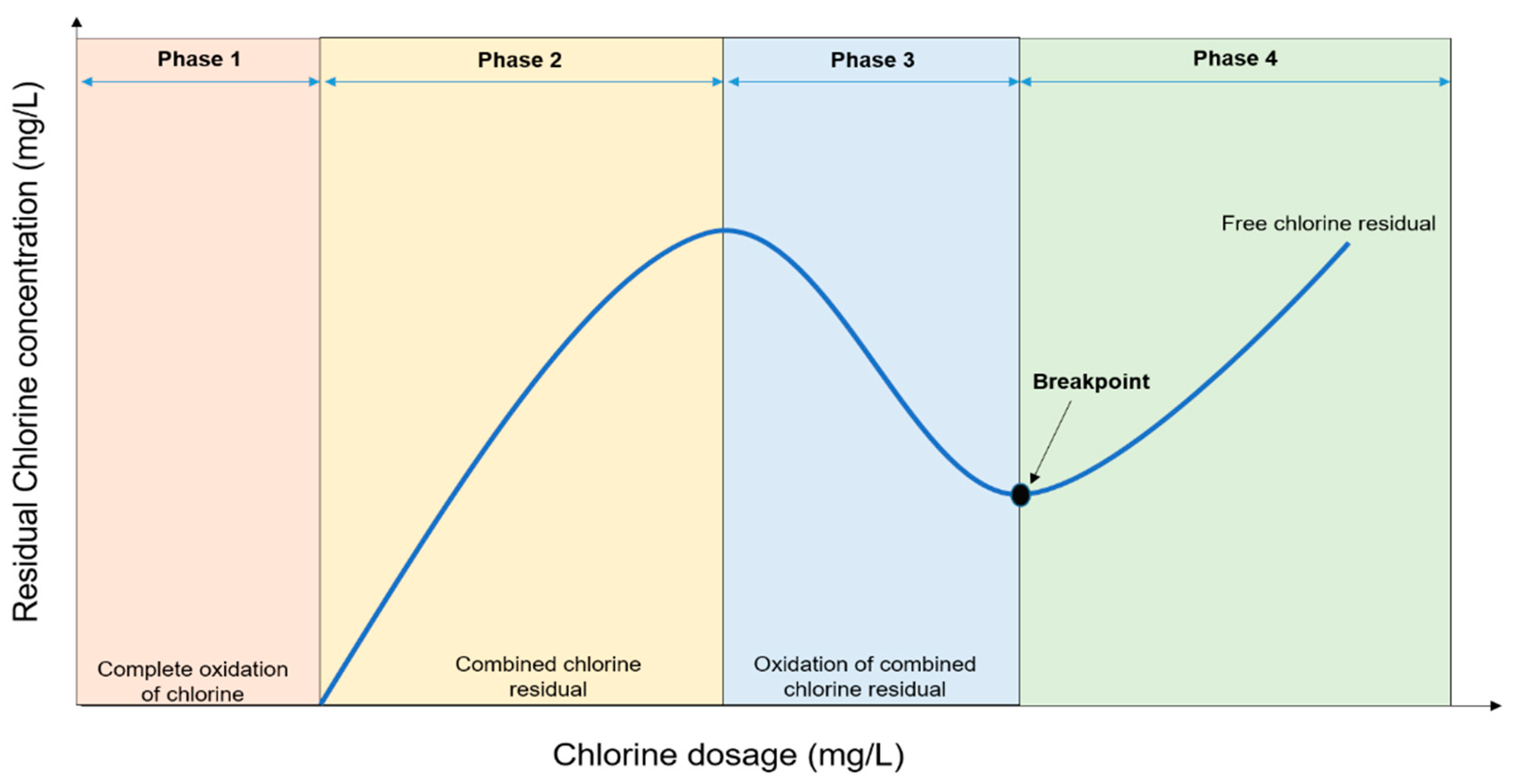 The biocidal mechanism of chlorination remains poorly understood. Some investigators opined that HOCl and OCl− formed when chlorine is added to water destroy microbial macromolecules. Further work on this supposition led to the “multiple hit” concept, which asserts that bacterial kill by chlorination is probably due to the attack and damage of microbial biomolecules [3]. Venkobachar et al. [4] and Haas [5] reported leakage of cellular macromolecules when bacteria were treated with chlorine. Venkobachar [4] also observed that chlorine significantly inhibits oxidative phosphorylation and the uptake of oxygen, and that, the inhibition of respiratory enzyme was responsible for the phosphorylation inhibition phenomenon, rather than a deficiency in phosphate uptake. In a different study, Chang [6] suggested that the extensive destruction of bacterial enzymatic systems is responsible for the rapid destruction of pathogens during chlorination. Various other investigators have also recognized that chlorine destroys microorganisms through changes in membrane permeability, nucleic acid damage and leakage of intracellular biomolecules [7][8]. Generally, it appears that chlorination causes physiological and morphological changes to the bacterial cell wall, altering its permeability. The chlorine molecules subsequently enter the cytoplasm, interfering with different enzymatic reactions, in a possible event cascade depicted in Figure 2. 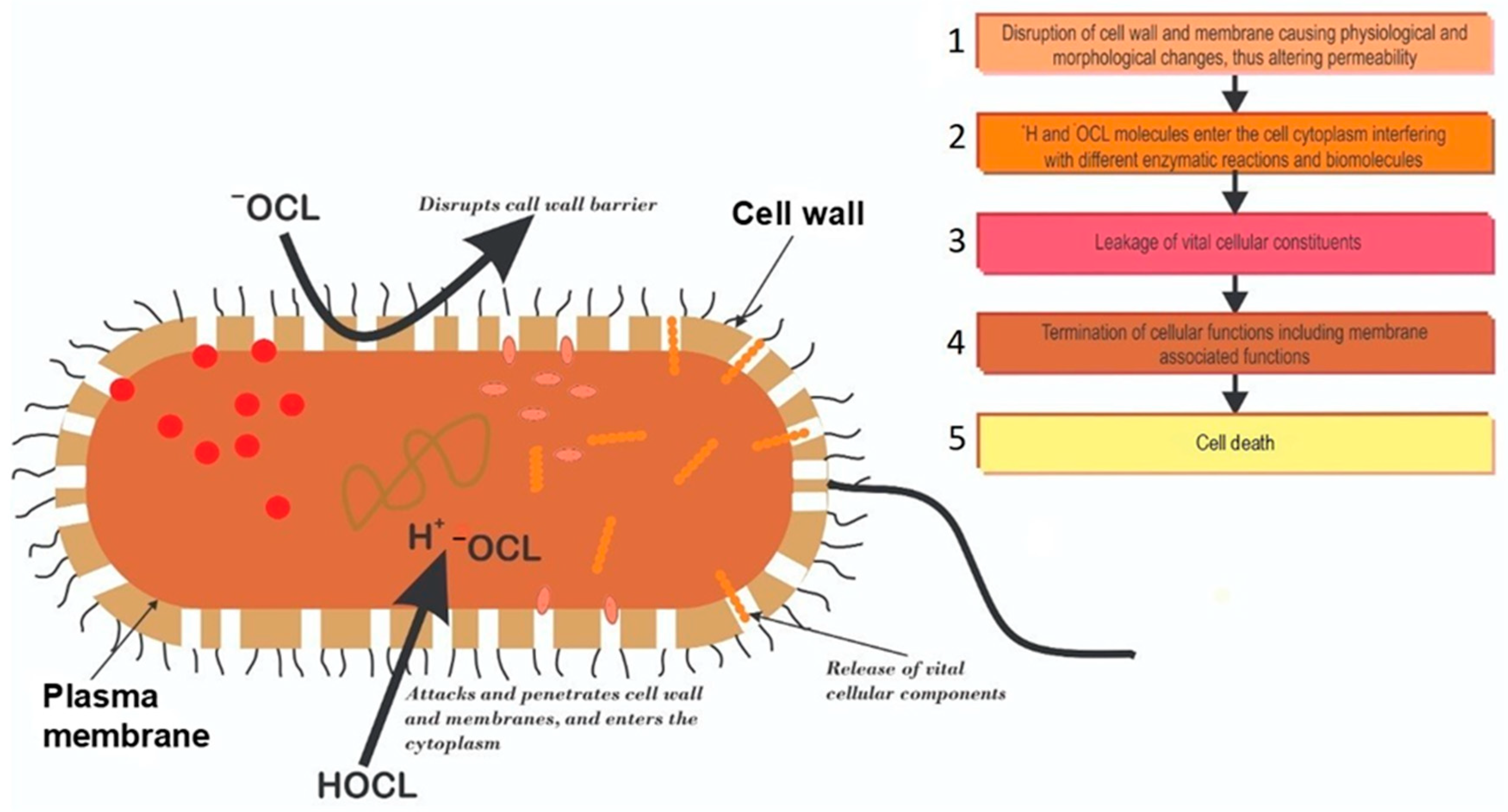 Various international and local authorities have regulations to ensure the protection of water sources from chemical and microbiological contaminants. At a global level, for instance, the WHO recommends chlorine residual of 0.2 to 0.5 mg/L in water supplies [9], while the South African Department of Water and Sanitation stipulates chlorine residual of 0.25 mg/L for discharged wastewater effluents released into surface water environment [10][11]. Although some concerns have emerged in recent years about the limitations of chlorine usage in water treatments, there is no doubt, however, that chlorination remains one of the most significant advances in water purification and public health protection [12]. Reports on chlorine surviving microorganisms from chlorinated water sources continue to emanate [13][14][15]. Various investigators have proposed different mechanisms by which microorganisms may develop tolerance to disinfectants. These include (i) cell surface modifications or encapsulation [16], (ii) attachment to surfaces or suspended particulate matter [17], (iii) microbial aggregation in biofilms [18], (iv) expression of multidrug efflux pump activity [19] and (v) spore formation [20]. These mechanisms conceivably favor the survival of opportunistic waterborne pathogens, thereby contributing to their persistence in water [21]. Table 1 lists some published studies on chlorine-resistant microorganisms from different sources and their reported mechanism of resistance.
Table 1. Summary of some reports of disinfectant-resistant microbes isolated from diverse aquatic sources.

More
© Text is available under the terms and conditions of the Creative Commons Attribution (CC BY) license; additional terms may apply. By using this site, you agree to the Terms and Conditions and Privacy Policy.
Upload a video for this entry
Information
Subjects: Microbiology
Contributors MDPI registered users' name will be linked to their SciProfiles pages. To register with us, please refer to https://encyclopedia.pub/register :
Martins Ajibade Adefisoye
,
Martins Adefisoye
,
Ademola Olaniran
View Times: 102
Entry Collection: Wastewater Treatment
Revisions: 2 times (View History)
Update Time: 06 Jun 2022
Table of Contents
1000/1000
Hot Most Recent