Submitted Successfully!
Thank you for your contribution! You can also upload a video entry related to this topic through the link below:
https://encyclopedia.pub/user/video_add?id=16732
Check Note
2000/2000
Crosstalk between Apoptosis and Autophagy
Edit
This entry is adapted from 10.3390/ijms222212466

Research in biomedical sciences has changed dramatically over the past fifty years. There is no doubt that the discovery of apoptosis and autophagy as two highly synchronized and regulated mechanisms in cellular homeostasis are among the most important discoveries in these decades. Along with the advancement in molecular biology, identifying the genetic players in apoptosis and autophagy has shed light on our understanding of their function in physiological and pathological conditions. Apoptosis and autophagy play essential roles in human health, and their malfunction leads to many diseases, including cancer, neurodegenerative disease, and autoimmune disorders. These mechanisms are highly regulated, and there is complex crosstalk between them.

1. Crosstalk between Apoptosis and Autophagy

Until 1972, when Kerr coined the term apoptosis, cellular death fell solely under necrosis. However, research in the following decades has broadened our understanding of different death modalities. Apoptosis is now referred to as caspase-dependent programmed cell death to differentiate it from other modalities of cell death, such as PCD conferred by autophagy. As mentioned above, autophagy is induced as part of normal cellular hemostasis or by external stimuli. However, autophagy’s role in cellular remodeling has been shown in different organisms, especially as a protective mechanism during starvation and other cellular stress conditions. Autophagy can act as a double-edged sword in anti- and pro-cell survival depending on the physiological and pathological conditions. Apoptosis and autophagy have a very complex relationship, with complicated crosstalk. Many genes linked to apoptosis regulation have turned out to be also involved in autophagy. In many instances, autophagy precedes apoptosis, as a non-lethal dose of stress can initially induce autophagy. However, a cell’s prolonged exposure to stress can lead to suicidal death. The tumor suppressor protein, P53, is known to be the guardian of the genome, and mutation in P53 provides a fundamental advantage to cancer cells. Normally, the P53 protein is partially localized at a low level in the cytoplasm, but upon genotoxic insult or stress conditions such as hypoxia, the phosphorylated form of P53 translocates to the nucleus where it initiates its antiproliferative function by activating variable biological outputs such as cell cycle arrest, senescence, and apoptosis. Nuclear translocation of P53 results in its cytoplasmic reduction, and recent studies indicate that cytoplasmic P53 suppresses autophagy. Therefore, depletion of P53 beyond a threshold activates autophagy in the cytoplasm. Chemical inhibition of P53 by pifithrin or knockout of wild-type P53 increases autophagy in various cell lines [1]. Additionally, the expression of P53 protein lacking a nuclear localization signal (NLS) in the knockout background suppresses ectopic autophagy [1]. Mutants of P53 that are predominantly cytoplasmic inhibit autophagy, while the constitutive nuclear P53 mutants fail to suppress it [2]. Recent data suggest that the cytoplasmic P53 inhibits the ULK1–ATG13–ATG101–FIP200 complex and blocks autophagosome formation, tempering autophagy activity [3][4]. In line with these data, CEP-1 (the functional orthologue of P53 in C. elegans) inactivation induces autophagy in worms [5].
As stated above, p53 and autophagy have an intertwined connection. Nuclear P53 was shown to transcriptionally activate autophagy-related genes such as the genes involved in lysosomal maturation [6]. One example of the autophagy-related target genes of P53 is DRAM1 (DNA damage-regulated autophagy modulator 1), which encodes for the lysosomal membrane protein responsible for activation of the lysosome. Furthermore, other studies have suggested that key autophagy regulators are the target of P53. ChIP-seq combined with RNA sequencing upon DNA damage revealed a number of P53 targets that act upstream in the autophagy pathway, such as ULK1 and ULK2, linking DNA damage response to autophagy induction. mTOR, the master regulator of autophagy, is the nutrition-sensing molecule whose activity leads to multiple physiological outputs. mTOR is the integral component of two distinct yet related complexes, TORC 1 and TORC 2. TORC 1 acts downstream of PI3K/AKT, a transducing pathway that governs cell growth, proliferation, and survival by indirectly activating mTORC 1 [7]. Over the past years, it was well established that P53 can inhibit AKT activity, which results in the indirect inactivation of mTOR, promoting autophagy [8].
As mentioned previously, Beclin1 was initially discovered in a yeast two-hybrid screen as an interacting partner of the antiapoptotic Bcl2. Later, Beclin1 was also identified as an autophagy regulator, linking autophagy to programmed cell death. Consistent with the data, Beclin1 homozygous mutation in mice causes embryonic lethality, possibly due to the defect in autophagy regulation, while mice carrying homozygous mutations have an increased likelihood of spontaneous tumorigenesis [9][10]. Beclin1 acts as a platform for binding other autophagy regulators and binds to PI3KC3, VPS34 (a class III phosphoinositide kinase catalytic subunit), and the regulatory subunit VPS15/PIK3R4 to facilitate phagosome formation. The binding of Beclin to Bcl2 effectively diminishes autophagy. In addition, a Bcl2 mutant, defective in binding to beclin1, failed to inhibit autophagy (Figure 1). 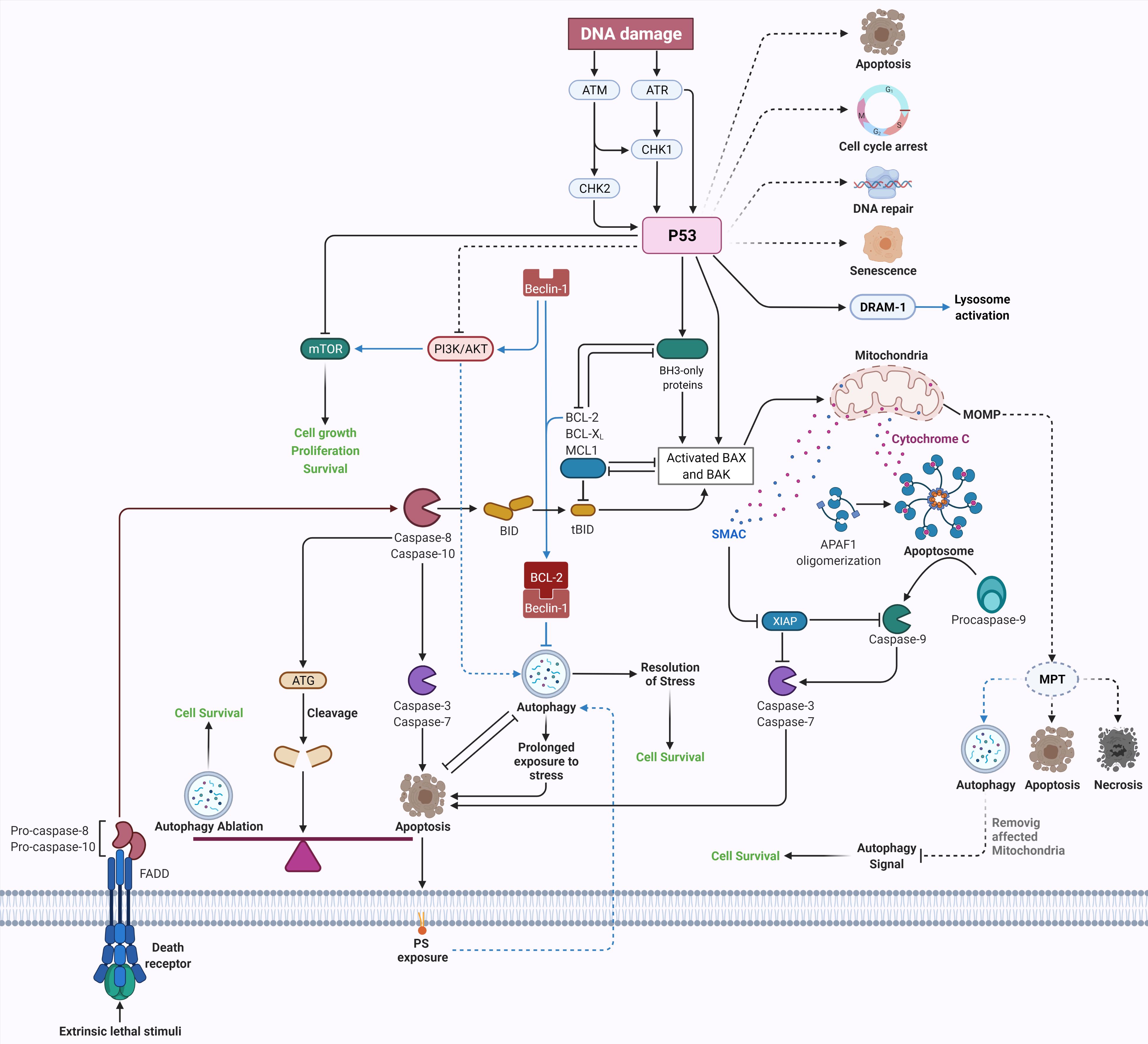 Figure 1. Crosstalk between apoptosis and autophagy. There is complex crosstalk between these two pathways, and they interact in different ways and situations. P53 is the master regulator of cell death and is activated via various cellular inputs, e.g., in response to DNA damage. Activation of P53 leads to apoptosis while inhibiting autophagy. Additionally, apoptosis can activate or inhibit autophagy based on the cell status. The mitochondrial outer membrane potential is disrupted upon activation of the intrinsic apoptosis pathway, leading to MPT. In this situation, the number of affected mitochondria determines the cell fate. If only a few mitochondria are affected, autophagy activity can eliminate them, leading to cell survival. However, when there are more mitochondria affected, apoptotic death will be the cellular fate. In certain situations, when the majority of mitochondria are affected by MPT, the cell undergoes necrosis. In addition, caspases are major proteins in apoptotic pathways whose enzymatic activity can activate the autophagy pathway by cleaving the precursor of ATG proteins or suppress autophagy by cleaving ATG proteins. Autophagy, in turn, could activate or suppress apoptosis. For instance, phosphatidylserine exposure following apoptosis could be a save-me or eat-me signal which activates autophagy. The stress level could tip the balance between life and death through autophagy activity. Autophagy can save cells by cleaning malfunctioning proteins, organelles, and so forth, or, upon prolonged exposure to stress, it can activate cell death. DRAM-1: DNA damage-regulated autophagy modulator 1; MOMP: mitochondrial outer membrane permeabilization; MPT: mitochondrial permeability transition; SMAC: second mitochondria-derived activators of caspases; FADD: Fas-associated death domain protein; PS: phosphatidylserine. The illustration is created with BioRender.com.
As have been discussed, one of the best examples of the crosstalk between autophagy and apoptosis is the externalization of the membrane phosphatidylserine (PS) in apoptotic cells as a signal for their engulfment via autophagy; this process is called efferocytosis, and its malfunction leads to several disorders, including inflammatory and autoimmune diseases [11][12][13]. PS externalization is not particular to apoptosis, and it has been shown in other types of cell death, including necrosis. It has been suggested that based on the cell type, PS exposure could be an “eat-me” or “save-me” signal and is a physiological mechanism for cell clearance evolutionarily conserved from nematodes to humans [14].
We have also elaborated on the role of mitochondria and MPT in cellular functions, especially apoptosis. Lemasters et al. reviewed the effects of MPT in physiological and pathological conditions [15][16]. They mentioned that mitochondria have a half-life of 10–25 days in non-proliferating cells and provided evidence for the role of MPT in mitochondria turnover [17][18][19][20]. Using high-resolution microscopy, it has been shown that starvation-induced autophagy dramatically increases the number of depolarizing mitochondria [21]. Several factors may lead to MPT, including the accumulation of intracellular Ca2+, phosphate, and reactive oxygen species (ROS) and a decrease in pH [22]. Lemasters et al. also proposed that MPT is responsible for mitochondrial membrane depolarization and the signaling initiation of autophagy [15]. Nonetheless, autophagy is responsible for removing damaged or excess organelles in the cell, comparable to apoptosis at the tissue level; therefore, the level of MPT defines the type of death. When some mitochondria undergo MPT, autophagy is activated, and the affected mitochondria are removed, suppressing the autophagy signals. However, if the number of affected mitochondria is higher, autophagy may no longer be enough to answer the proapoptotic signals released from the mitochondria, and MPT leads to apoptosis induction. In the worst case, if almost all of the mitochondria are involved in MPT, oxidative phosphorylation uncoupling causes ATP depletion, which results in necrosis [15][16]. This is one of the most compelling hypotheses that beautifully relate the three well-known types of cell death to MPT. It has been suggested that autophagy and apoptosis act in synchrony such that, in normal conditions, autophagy functions as a cell guardian, but it can lead to cell death in case of extreme damage or apoptosis malfunction [23][24].
Although there are some caspase-independent pathways of apoptosis, caspases are the most important players in the apoptosis pathway. It has been shown that apoptosis crosstalks with autophagy through the recognition and cleavage of ATG proteins by caspases [25][26][27][28][29][30][31][32][33]. This cleavage could have two opposing results: ATG cleavage results in autophagy ablation as a protective mechanism against cell death or tips the homeostatic balance in favor of apoptosis [34][35][36][37][38]. This process is regarded as adherence of a dying cell to apoptosis by ceding other cellular functions [39]. However, it has been shown that ATG fragments can play different roles than their original functions by affecting autophagy and apoptosis [40][41]. Nevertheless, induction of autophagy via caspase has been described in some studies [41][42][43][44]. Autophagy, in turn, has been shown to have cell survival function by the degradation of proteins in the apoptotic pathway and the prevention of cells from entering suicidal states [45].
Levine and colleagues defined autosis in 2013 as a type of autophagy-dependent cell death that is independent of apoptosis and stimulated by starvation, neonatal cerebral hypoxia–ischemia, and autophagy-inducing peptides such as Tat-Beclin1 [46]. Autosis occurs due to severe autophagy and has its specific morphological characteristics, including an enhanced number of autophagosomes, nuclear expansion, inflation of the perinuclear space, and fragmentation of the endoplasmic reticulum [46][47][48][49].

Cell death is a highly regulated and essential process to maintain tissue integrity and homeostasis in an organism. Apoptosis, often referred to as programmed cell death, is a predefined and caspase-dependent cell death pathway. The two types of apoptotic pathways, intrinsic and extrinsic, work synergistically to ensure that the body removes only defective cells without increasing proinflammatory proteins. In contrast to apoptosis, necrosis is the uncontrolled cell death mechanism that implicates the upregulation of several proinflammatory proteins and contributes to the damage of surrounding cells. While autophagy involves the degradation of cellular components, being sequestered by the lysosomes, it either protects the cell from apoptosis or promotes it, depending on the stimuli. All forms of cell death are executed via different yet coinciding signaling pathways, and depending upon the cell status, they can be activated simultaneously. The disruption in the cell death pathways or the irregular activation of them can lead to various pathologies. In cancer, the uncontrolled cell division and growth due to the upregulation of survival genes and downregulation of antiapoptotic genes trigger tumor formation, whereas increased apoptosis can cause autoimmune diseases. Similarly, neurodegenerative conditions such as Parkinson’s result from the failure of autophagy, which results in the neuronal accumulation of protein aggregates. Hence, an intricate balance must be maintained between cell survival and cell death. Until now, there are many cell death genes whose functions have been explored, but, for some, the functions’ comprehension remains elusive. The tissue and organ-specific activation of cell death pathways affect how different illnesses respond to therapies. Therefore, a deep understanding of cell death mechanisms is vital in developing therapies and drugs against cancer and other diseases.