Submitted Successfully!
Thank you for your contribution! You can also upload a video entry related to this topic through the link below:
https://encyclopedia.pub/user/video_add?id=16191
Check Note
2000/2000
Metal-Organic Frameworks in CO2 Cycloaddition with Epoxides
Edit
This entry is adapted from 10.3390/polym13223905

The level of carbon dioxide in the atmosphere is growing rapidly due to fossil fuel combustion processes, heavy oil, coal, oil shelter, and exhausts from automobiles for energy generation, which lead to depletion of the ozone layer and consequently result in global warming. The realization of a carbon-neutral environment is the main focus of science and academic researchers of today. Several processes were employed to minimize carbon dioxide in the air, some of which include the utilization of non-fossil sources of energy like solar, nuclear, and biomass-based fuels. Consequently, these sources were reported to have a relatively high cost of production and maintenance. The applications of both homogeneous and heterogeneous processes in carbon capture and storage were investigated in recent years and the focus now is on the conversion of CO2 into useful chemicals and compounds. It was established that CO2 can undergo cycloaddition reaction with epoxides under the influence of special catalysts to give cyclic carbonates, which can be used as value-added chemicals at a different level of pharmaceutical and industrial applications. Among the various catalysts studied for this reaction, metal-organic frameworks are now on the frontline as a potential catalyst due to their special features and easy synthesis. Several metal-organic framework (MOF)-based catalysts were studied for their application in transforming CO2 to organic carbonates using epoxides. Here, we report some recent studies of porous MOF materials and an in-depth discussion of two repeatedly used metal-organic frameworks as a catalyst in the conversion of CO2 to organic carbonates

1. Reaction Mechanism for the Production of Cyclic Carbonates from CO2 and Epoxides

CO2 conversion into cyclic carbonate compounds by cycloaddition reaction to epoxide is regarded as a method with economic advantages to attain a CO2-neutral environment and to serve as a source for value-added chemicals. Various researchers reviewed the mechanism for cycloadding CO2 into epoxides [1][2][3][4][5][6][7][8].
The process requires a robust acid catalyst to stimulate the epoxide substrate and the highly stable CO2 double bond and thermodynamically facilitates the opening of the epoxide ring via nucleophilic co-catalyst (TBABr) attack forming an alkoxide as an intermediate, which subsequently combines with the CO2-adduct to give the desired carbonates (Figure 1). The tetrabutylammonium bromide (TBABr) co-catalyst functions as a nucleophile to motivate the opening of the epoxide rings. The synergistic effect between the MOF catalyst and TBABr is therefore crucial in attaining high catalytic performance [9][10]. The cycloaddition reaction of CO2 with epoxides was extensively investigated using different potential catalysts [11][12][13][14][15][16][17][18][19][20][21][22]. 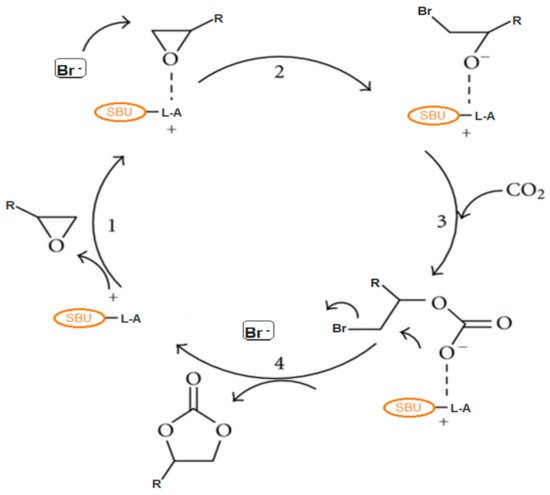 Figure 1. The general schematic reaction mechanism for CO2 cycloaddition with epoxides catalyzed by a Lewis-acid catalyst MOF and TBABr co-catalyst presence.
The best route for the mechanism was identified as the one that begins with the epoxides ring opening before the addition of carbon dioxide. This therefore proved that the catalytic system in this process strongly depends on the opening of the epoxide ring [23]. The different method for epoxide activation by the MOF catalyst was categorized into four bases on the features of the MOF catalyst (Figure 2) as follows: (a) metal-organic frameworks (MOFs) with acidic secondary building units (SBUs) as the only active site, (b) MOFs with acidic linkers as metal active site catalyst, (c) MOFs with Lewis base linkers also acting as a nucleophile and Lewis acidic components, a binary catalytic system (d) MOFs with ionic linkers, where a single-component catalyst is used without the TBABr co-catalyst. The homogenous co-catalyst, tetrabutylammonium bromide (TBABr) would alone promote the epoxide ring-opening in (a and b) and the effort is reinforced in (c). The influence of Lewis-acidic component in SBUs or metal nodes of the MOFs, however, cannot be exempted as indicated (b–d) [22]. 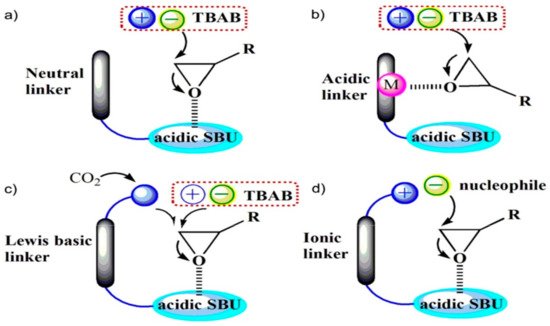 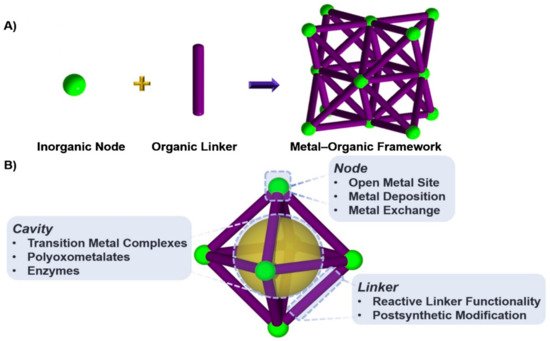 Figure 3. Special features of metal-organic frameworks: (A) Typical MOFs synthesis comprising inorganic nodes and organic linkers. (B) The accessibility of MOFs by modifying the node, linker, and content of the cavity. Reproduced with permission Ref. [28]. Copyright 2019 Elsevier.
Recent studies of some metal-organic framework materials as a catalyst for cycloaddition reaction (Table 1) reaffirmed that the cycloaddition reaction in most cases cannot proceed successfully without the presence of a co-catalyst. Tetra-n-butyl ammonium bromide (TBABr) was reported as the most effective co-catalyst among the various nucleophile components, TBAI, TBACl, and KI, and was identified to enhance epoxide ring opening in the reaction [45][56][57][58]. Some certain MOFs, however, were applied without the presence of a co-catalyst (Table 1, entry 17–20). Where this occured, the catalytic activity of MOFs were considered as a single component and were applied without the addition of TBABr. Nonetheless, based on the work studied, this type of reaction can only be successful under harsh reaction conditions of temperature and pressure (Table 1, entry 17–20) [59]. 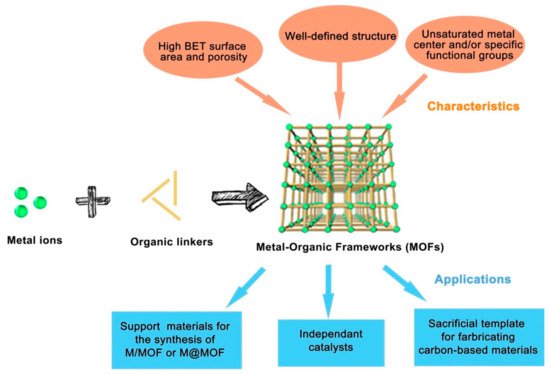 Figure 4. Illustration of MOF components, structure, characteristics, and mode of application. Reprinted with permission from Ref. [57]. Copyright 2018 Elsevier.
The addition of TBABr co-catalyst in most of the reported MOFs (Table 1, entry 1–16) further proved that the catalytic function of MOF catalysts in cycloaddition reaction works concurrently with the co-catalyst for successful conversion. Moreover, the catalyst/co-catalyst loading in the data entries (Table 1) was observed to be in relatively low percentage moles. The MOF catalytic materials were found to be active and were reused for at least three consecutive cycles in each case before losing their activity. All the reported MOFs (Table 1) were found to be effective at moderately ambient conditions, except for entry 17–20, which occured at relatively harsh conditions due to the absence of co-catalyst. Different epoxides such as propylene oxide, styrene oxide, and epichlorohydrin were found to undertake CO2 cycloaddition under the influence of the MOF catalyst, as shown in Table 1.
Table 1. Recent studies of MOF catalysts in CO2 cycloaddition reaction to epoxides with reaction conditions.
Note: All pressure units are converted to the approximate atm value.

3. MIL-101 Based MOFs in CO2 Cycloaddition with Epoxides

MIL-101 is one of the repeatedly reported MOF materials with a high potential catalytic activity for the conversion of CO2 to cyclic carbonates. This was ascribed to its possession of Lewis-acid sites due to Cr2+, present at the metal center [65] and structural flexibility, which allows its modifications by substituting different functional groups in the organic ligand but maintains the backbone structures. The synthesis and structural elucidation of MIL-101(Cr) was reported by different researchers [73][74][29][75][76][77][78][79][80][81][82][83].
MIL-101 is a three-dimensional structure based on chromium terephthalate that was first synthesized by Fėrey et al. [82], having the empirical formula {Cr3(OH)(H2O)2O[(O2C)C6H4(CO2]3∙nH2O} with the given name MIL: (Materials Institute Lavosier) in 2005 (Figure 5). The material has a very stable structure with excellent water resistibility even under acidic conditions and was proven to have thermal stability up to 300 °C under air. The MIL-101(Cr) structure exhibited a large surface area of approximately 4100 m2 g−1 and contained two different types of cages with diameters of 29 and 34 Å, which had pore openings of 12 and 16 Å, respectively (Figure 6) [82][84][85]. Those special properties made MIL-101 possess superior catalytic activity, which was applied in different applications [31][32][86][87][88][89][90]. The unique porosity of three-dimensional frameworks forms exclusive channels with large surface areas, which can enhance CO2 by providing sufficient reaction spaces. It also allows the encapsulation of other catalytic active materials into the large pores to improve the catalytic activity of the MIL-101 by forming a composites with enhanced activity for application in various fields [77][89]. The MOF was also applied as a catalyst in cycloaddition reaction of CO2 with epoxides as a single component catalyst without the addition of co-catalyst [59]. 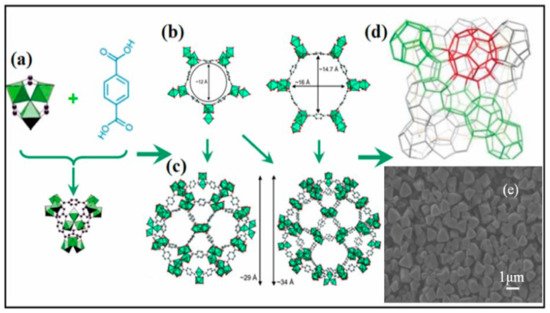 Figure 5. Synthesis and structural elucidation of MIL-101(Cr): (a) The formation of the hybrid super tetrahedron by the cluster chromium metal building unit and the bdc ligand; (b) Small pentagonal and larger hexagonal window (c) The two mesoporous cages; (d) 3D schematic representation of the MTN zeotype architecture (small cages are highlighted in green and large one is highlighted in red); (e) Morphology, showing clear octahedral shape with an average crystal size of ~1.0 μm [84]. 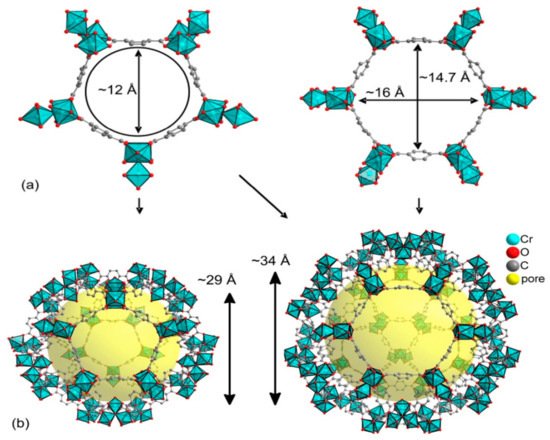 Figure 6. Trinuclear chromium building units and the bridging bdc ligands forming pentagonal and hexagonal rings (a) assembled into mesoporous cages (b) and mesoporous cages of yellow spheres with diameters of 29 or 34 Å, respectively. Reprinted with permission from Ref. [83]. Copyright 2016 Elsevier.

4. HKUST-1 for CO2 Cycloaddition with Epoxides

Another group of porous material that attracted the attention of researchers as a potential catalyst for CO2 cycloaddition with epoxides is HKUST-1 (Hong Kong University of Science and Technology) and also referred as MOF-199, a Cu-based of 1,3,5-benzenetricarboxylate (BTC) ligand. HKUST-1 was first synthesized in 1999 using copper(II) ion (Cu2+) as metal center and BTC ligand to give a light blue powder (Figure 7) [38][91][92], it was also reported using other metals with +2 oxidation state such as Cr2+ [93], Ni2+ [94], Zn2+ [95], Fe2+, Co2+ [96][97], and as bimetallic with two different metals at the center while maintaining the structure [98]. HKUST-1 material has a molecular formula [Cu3(BTC)2(H2O)3] and morphological structure with a sound level of thermal stability (Figure 8) and a capacity for chemical functionalization of the channel linings with face-centered-cubic crystals comprising a 3D intersecting system with big square-shaped pores (9 Å by 9 Å) of a continuous network through Cu(OAc)4 paddle wheel SBU, as in Figure 9. The open metal sites in the HKUST-1 structure provides the basis for CO2 adsorption property [99][100]. The large porous structure can also be used to create effective heterogeneous catalysts as templates to construct dynamic heterogeneous system by encapsulation of other nanomaterials to form composites. The resultant composite material can preserve the original properties of the HKUST-1, while gaining additional unique properties that can be applied in different applications [25][101][102][103][104]. 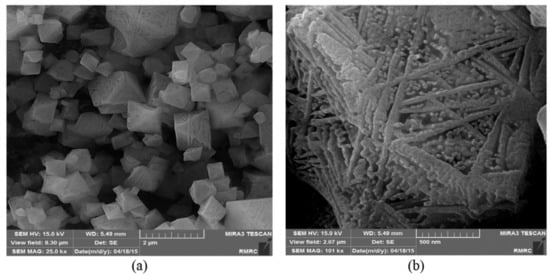