Submitted Successfully!
Thank you for your contribution! You can also upload a video entry related to this topic through the link below:
https://encyclopedia.pub/user/video_add?id=11695
Check Note
2000/2000
Mangrove Blue Carbon Stocks
Edit
Upload a video
This entry is adapted from 10.3390/f12070816

Mangrove forests play an important role in mitigating climate change but are threatened by aquaculture expansion (shrimp ponds). The change of land use from natural environments to productive uses, generates a change in the balance and carbon sequestration and storaging. In mangrove forest the carbon stocks are larger than in other tropical forest. Addtionally, soil mangrove forest represent 40-80% of Cardon stocks.  These reasons are the evidence of mangrove forest need to be included in REED programs and conservation strategies.

Mangrove forests have an area of 152,361 km2 worldwide [1], with 15.7% of that surface in South America (23,882 km2) [2]. Currently, mangrove forests in Ecuador occupy 1906 km2 [3]. These ecosystems are wildlife refuges with high natural, cultural, and scientific value, as well as the largest artisanal and industrial fishing area in Ecuador [4].
Mangrove forests play an important role in the global carbon cycle because they are highly productive ecosystems [5]. Currently, coastal ecosystems such as mangroves present burial rates of 353 gm−2 y−1 [6]. Although they occupy only a small fraction of the coastal area globally (0.5%), mangroves store 10%–15% of carbon (C) present in coastal sediments (at a rate of 24 Tg C y−1) and export 10%–11% of terrestrial carbon particles to the ocean [7]. In addition, they contribute 55% of air–sea exchange and 14% of organic carbon burial, and export 28% of dissolved inorganic carbon (DIC) and 13% of dissolved organic carbon (DOC) plus particulate organic matter (POC) from the coastline and estuaries [8].
In these ecosystems, soils are the largest carbon sinks due to high contents of organic matter (OM) [5] and deep soil horizons. Soil C accumulation depends on several factors such as organic matter inputs, root turnover, necromass, algae and benthic organisms, the slow decomposition of refractory material, the magnitude and frequency of waves, the activity of micro- and macro-organisms, tree species and the composition of litter, and high humidity and temperature [9]. Average soil stocks are more than 1023 Mg C ha−1, representing between 48 and 98% of carbon stored at depths from 0.5 to more than 3 m [10]. These values double and even triple carbon stocks in terrestrial tropical forest soils; one example is the terrestrial forest of Sumatra with 180 Mg C ha−1 [11][12]. However, accelerated deforestation threatens the stability of mangrove carbon sinks. Global CO2 emissions caused by the loss of mangrove forests have been estimated to be ~ 7.0 Tg CO2e y−1. Countries with the highest CO2 emissions due to mangrove loss are Indonesia (3410 Gg CO2e y−1) and Malaysia (1288 Gg CO2e y−1) [13].
Land use change in mangrove forests results in mineralization of C that has been stored for decades or millennia. From 1982 to 2002, the loss of 35% of the world’s mangroves resulted in the release of 3.8 × 1014 g C stored in the aboveground biomass of these forests [14][15]. It is estimated that 10,600 Mg CO2 km−2 will be emitted in the first year after mangrove cover changes to other land uses, and 20 years later, 3000 Mg CO2 km−2 y−1 [16]. Globally, the estimates of emissions vary between 0.02 and 0.12 Pg C y−1, equivalent to 10% of globlal emissions caused by deforestation [10][17][18]. In this sense, international agreements such as the mechanism for reducing emissions from deforestation and degradation (REED+), whose main strategy is to maintain C stored through economic incentives to forest conservation, are a cost-effective option to mitigate climate change [10]. In addition, there are other programs from the United Nations Framework Convention on Climate Change (UNFCCC), which require rigorous monitoring of carbon sinks and emissions.

In the Gulf of Guayaquil, we identified 117,746 ha of medium-statured mangroves, 16,317 ha of tall mangroves, and 163,950 ha of shrimp farms. Due to the homogeneity in the composition of species present in the sampled transects, it was not possible to differentiate forest community types. However, basal area allowed us to differentiate the structure of the trees present in the two strata (Figure 1). The structure of both mangrove strata also differs, with a large presence of trees with 5–20 cm diameters and a low presence of trees of 36–50 cm in diameter in medium-statured mangrove. In contrast, tall mangroves showed a diameter distribution biased towards larger trees, exceeding the dbh > 50 cm category and reaching up to > 65 cm (Figure 2). 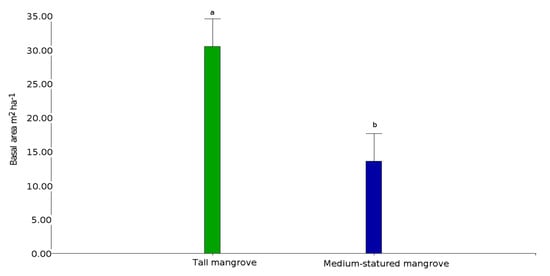 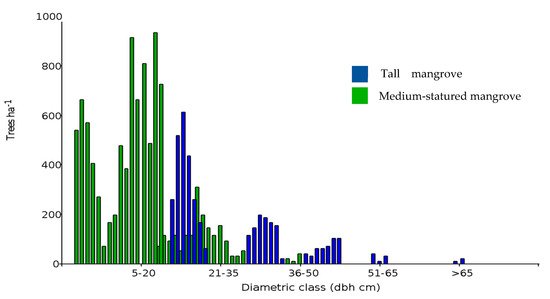 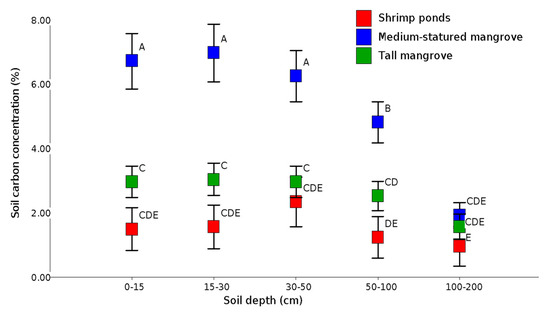 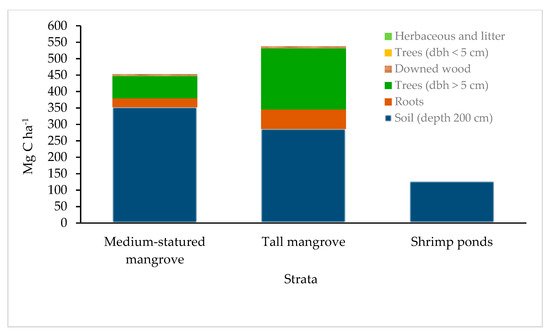 Figure 4. Total carbon stocks in compartments of the mangrove forest and shrimp ponds at 200 cm of depth.