Single-crystalline CdTe(133) films have been grown by metalorganic chemical vapor deposition on Si(211) substrates. We studied the effect of various growth parameters on the surface morphology and structural quality of CdTe films. Proper oxide removal from the Si substrate is considered to be the principal factor that influences both the morphology and epitaxial quality of the CdTe films. In order to obtain single-crystalline CdTe(133) films, a two-stage growth method was used, i.e., a low-temperature buffer layer step and a high temperature growth step. Even when the low-temperature buffer layer shows polycrystalline structure, the overgrown layer shows single-crystalline structure. During the subsequent high-temperature growth, two dimensional crystallites grow faster than other, randomly distributed crystallites in the buffer layer. This is because the capturing of adatoms by steps occurs more easily due to increased adatom mobility. From the viewpoint of crystallographic orientation, it is assumed that the surface structure of Si(211) consists of (111) terrace and (100) step planes with an interplanar angle of 54.8°. This surface structure may provide many preferable nucleation sites for adatoms compared with nominally flat Si(100) or (111) surfaces. The surface morphology of the resulting films shows macroscopic rectangular-shaped terrace—step structures that are considered to be a (111) terrace with two {112} step planes directed toward <110>. 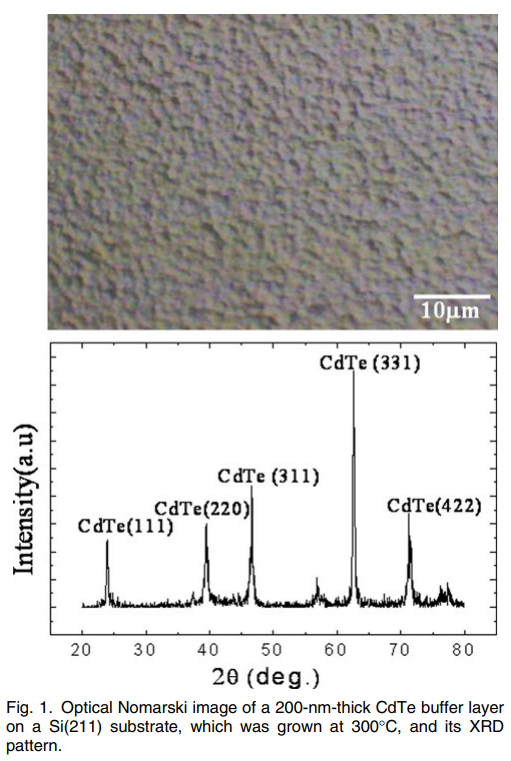 The typical surface morphology of the CdTe buffer layer on Si(211), which was grown at 300°C and has a thickness of 200 nm, and its XRD pattern are shown in Fig. 1. The XRD pattern indicates that the CdTe layer is polycrystalline with preferred growth orientation of [331]. These results can be explained by three- dimensional nucleation at the initial growth stage. Although the Si(211) surface provides a periodic step array where nucleation can be initiated favorably, the limited lateral mobility due to the low deposition temperature prevents adatoms from moving to stable sites on the substrate surface. Therefore, nucleation occurs two-dimensionally at the step edge as well as three-dimensionally in the close vicinity of the incident site. This would result in polycrystalline structure of the film.