Cyclodextrins (CDs) are cyclic α-D-glucopyranose oligomers which are often described as a torus, but in somewhat more realistically pictures as a “shallow truncated cone”.[3] The most important feature of CDs is their cavity due to enable them to form host-guest complex .[4][5][6][7][8]  The formation of these inclusion complexes with small molecular guests of an appropriate size, shape and polarity It is precisely for this reason that they are often drawing up to brush over additives for long-term preservation of food. Typically, microencapsulation focuses on increasing the water solubility of lipophilic substances 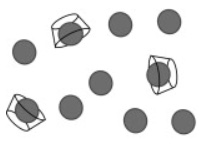 In the literature there are numerous examples where the use of certain antimicrobial agents can be added to food through microencapsulated with CDs.[10][11][12][13][14][15] In addition, significant increases in its effectiveness have been observed when these are applied in host-guest complexes formed with CDs versus their application as free molecules.

In this way, for example, the antimicrobial allyl isothiocyanate is used as food preservative and in the literature has been demonstrated a better performance applied entrapped in β-CD than un-entrapped. In fact, its shelf life of fresh cut onions gets increases in a significant way when it is applied as CD host-guest complexes.[17]

The use of CDs host-guest complexes instead of the free substance offers the benefit of being applied more regularly, maintaining its effect on the food for longer and being used in a more accurate dosage. All this avoids possible toxic effects upon the products and significantly reduces the possible undesirable organoleptic modifications to guarantee food safety and the success of the product in the market.

Additives as hexanal[18], thymol[19], eugenol[20][21] and/or essential oils which contain them, are examples of such additives used as food preservatives and potential hots-guest complex formers with CDs. This way, solubility of these substances is increased so they can easier penetrate the vegetable, but also off-flavours associated to some of them can be reduced maintaining antimicrobial effect.

The shelf life of fresh produce is always a problem to be solved by food technologists. Washes with water or treatments with chlorine are an effective tool against the microbiota found on the surface of fruits and vegetables. However, these traditional treatments are not capable of efficiently destroying the internalized microorganisms. For this purpose, it has been demonstrated that ionizing radiation is capable of affecting these pathogens, eliminating them in a satisfactory manner. Unfortunately, these ionizing radiations also damage the product, reducing its quality before the market and causing shrinkage is its organoleptic characteristics or its nutritional properties. However, there is evidence in the literature that this method may be more viable the use of ionizing raditatons, since the addition of β-CD inclusion complexes with different essential oils causes an increase in the radiation sensitivity of microorganisms[22]. It is evident that the possibility of reducing the amount of radiation supplied to the fruit or to the vegetable will also imply a reduction of the losses in the commercial and nutritive value that the ionizing radiation causes on them.

Finally, microencapsulation with CDs, as indicated in the literature, allows the recovery of residual liquids from food processing[23]. Li et al. use the bleaching liquids of two edible fungi to prepare a natural origin antioxidant powder with potentially suitable for food.