Wide bandgap (WBG) power modules able to tolerate high voltages and currents are the most promising solution to reduce the size and weight of the power management and conversion systems. These systems are envisaged to be widely used in the power grid and the next generation of more (and possibly all) electric aircraft, ships, and vehicles. However, accelerated aging of silicone gel when being exposed to high frequency, fast rise-time voltage pulses can offset or even be an obstacle for using WBG-based systems. Silicone gel is used to insulate conductor parts in the module and encapsulate the module. It has less electrical insulation strength than the substrate and is susceptible to partial discharges (PDs). PDs often occur in the cavities located close to high electric field regions around the sharp edges of metallization in the gel. The vulnerability of silicone gel to PDs occurred in the cavities under repetitive pulses with a high slew rate is investigated in this paper. The objective mentioned above is achieved through developing a Finite-Element Analysis (FEA) PD model for fast, repetitive voltage pulses, which has been done for the first time to the best of our knowledge. By using the model, the influence of frequency and slew rate on the magnitude and rate of PD events is studied.

WBG power modules, which can tolerate higher voltages and currents than silicon (Si)-based modules, are the most promising solution to reducing the size and weight of power electronics systems. For example, while the highest breakdown voltage capability, known as the blocking voltage, for commercial Si insulated gate bipolar transistors (IGBT) is 6.5 kV, that for SiC IGBTs is 15 kV for 80 A and 24 kV for 30 A. While the blocking voltage of this 15-kV SiC-IGBT is 2.3 times higher than the Si-IGBT, its volume is one-third that for the Si-IGBT. This translates into higher electric stress within the module. The high electric field, as well as its exposure to voltage pulses with high slew and repetition rates, create an extremely poor environment for insulation systems in envisaged high voltage high-density WBG modules where partial discharges (PDs) have the most impact on insulation degradation. Two common insulation materials used in power modules are ceramic substrate and silicone gel. As the main insulation system, the ceramic substrate ensures electrical insulation between active components and the baseplate which is generally grounded. Silicone gel is used for encapsulation to prevent electrical discharges in air and to protect substrates, semiconductors, and connections against humidity, dirt, and vibration. One of the weakest points inside the power electronics module, in terms of resistance against PD, is the regions in the silicone gel close to the sharp edges of metallization layers. These sharp edges lead to high electric field stress in the air-filled voids located in the mentioned regions that may initiate PDs within voids.  One of the merits of WBG devices is that their slew rates and switching frequencies are much higher than Si-based devices. However, from the insulation side, frequency and slew rate are two of the most critical factors of a voltage pulse, influencing the level of degradation of the insulation systems that are exposed to such voltage pulses. Solid dielectrics are found to be vulnerable to frequency, while the dominant factor for PD inception in liquid dielectrics is rise-time. In this regard, the study of the insulation degradation of silicone gel which has the properties of both liquids and solids can be challenging. The modeling of PD gains even more importance when knowing that the detection of PDs becomes very difficult under voltage pulses with short rise-times of tens to hundreds of ns. The existence of voids and air bubbles is an inevitable phenomenon in dielectrics. They can be formed either during the manufacturing process or the streamer propagation itself. Aside from the manufacturing process, the electrical treeing itself causes the formation of air bubbles inside the dielectrics. The experiments have shown that the self-healing characteristic of silicone gel cannot quickly omit the air bubbles; even the cavity can grow due to the surface discharges occurring in silicone gel. A cavity inside silicone gel can last up to 10 ms that is 1000 times longer than that of non-viscous liquids. PDs during this time may lead to the gradual degradation of silicone gel. The air-filled cavities inside a dielectric are weak points due to their lower permittivity than the surrounding material. According to the enhancement factor, the electric field in a spherical void inside the silicone gel can be enhanced by about 30% compared to the void-free case. Therefore, the impact of such voids on the expected lifetime of silicone gel should be taken into account. Some methods, such as geometrical techniques alone or combined with the application of nonlinear field-dependent conductivity layers, have been proposed to address the high electric field issue in envisaged high voltage high-density WBG power modules. However, to the best of our knowledge, PD modeling for air-filled cavities in silicone gel, especially under fast, repetitive voltage pulses, still has not been reported. Elucidating and understanding of mechanisms and phenomena behind PDs in air-filled cavities in silicone gel helps to develop more efficient electric field control methods. In this paper, the FEA approach is utilized to dynamically model PDs inside a cavity located in silicone gel and calculate the electric field and potential distribution in different parts of the system. The parameters in the model are chosen and verified to be in agreement with the experimental results reported in the literature. The model developed in COMSOL Multiphysics interfaced with MATLAB provides the opportunity to examine the impact of fast, high-frequency voltage pulses on the initiation of PD from the standpoint of both intensity and number.

The case study considered in this paper consists of a sphere-sphere electrode system that provides a weakly non-uniform electric field. A spherical air-filled cavity is located between the electrodes. The configuration of the system is shown in Figure 1

Figure 1. The graphical representation of the case study, (a) 3D, (b) Axi-symmetrical 2D

The electric field distribution is shown in Figure 2 right before and right after PD occurrence. 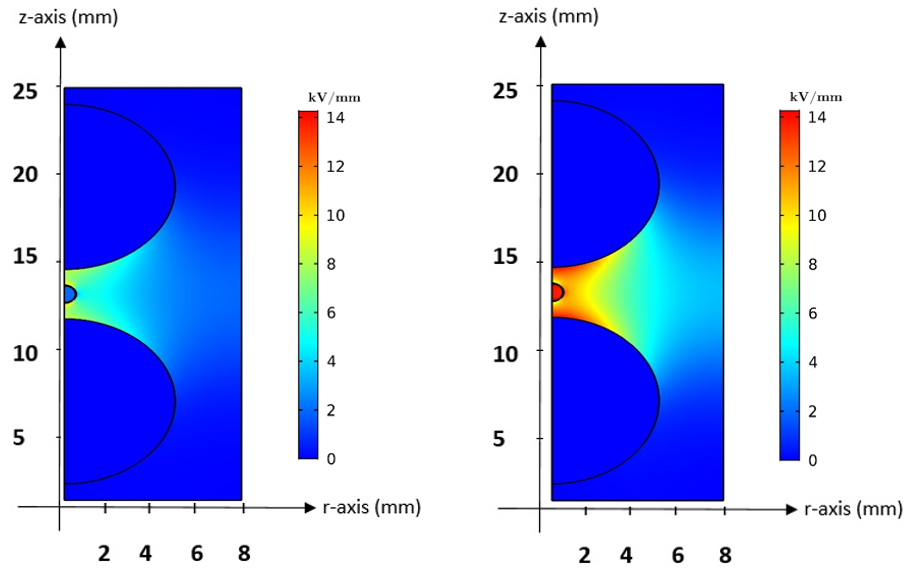 Figure 2. The electric field distribution (a) before, and (b) after PD occurrence. 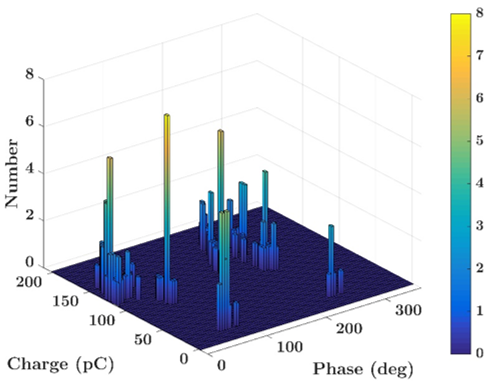 As seen in Figure 4, the destructive impact of frequency and rise-time on PD charge magnitude is clear. However, among these two factors, frequency is more detrimental at its high values. It should also be noted that the number of PDs per cycle may decrease by a frequency enhancement, but the severity of PDs is escalated.

Figure 4. The effect of (a) frequency, and (b) rise-time on PD intensity