RNA-binding proteins (RBPs) crucially regulate gene expression through posttranscriptional regulation, such as by modulating microRNA (miRNA) processing and the alternative splicing, alternative polyadenylation, subcellular localization, stability, and translation of RNAs. More than 1500 RBPs have been identified to date, and many of them are known to be deregulated in cancer. Alterations in the expression and localization of RBPs can influence the expression levels of oncogenes, tumor-suppressor genes, and genome stability-related genes. RBP-mediated gene regulation can lead to diverse cancer-related cellular phenotypes, such as proliferation, apoptosis, angiogenesis, senescence, and epithelial-mesenchymal transition (EMT)/invasion/metastasis. This regulation can also be associated with cancer prognosis. Thus, RBPs can be potential targets for the development of therapeutics for the cancer treatment. 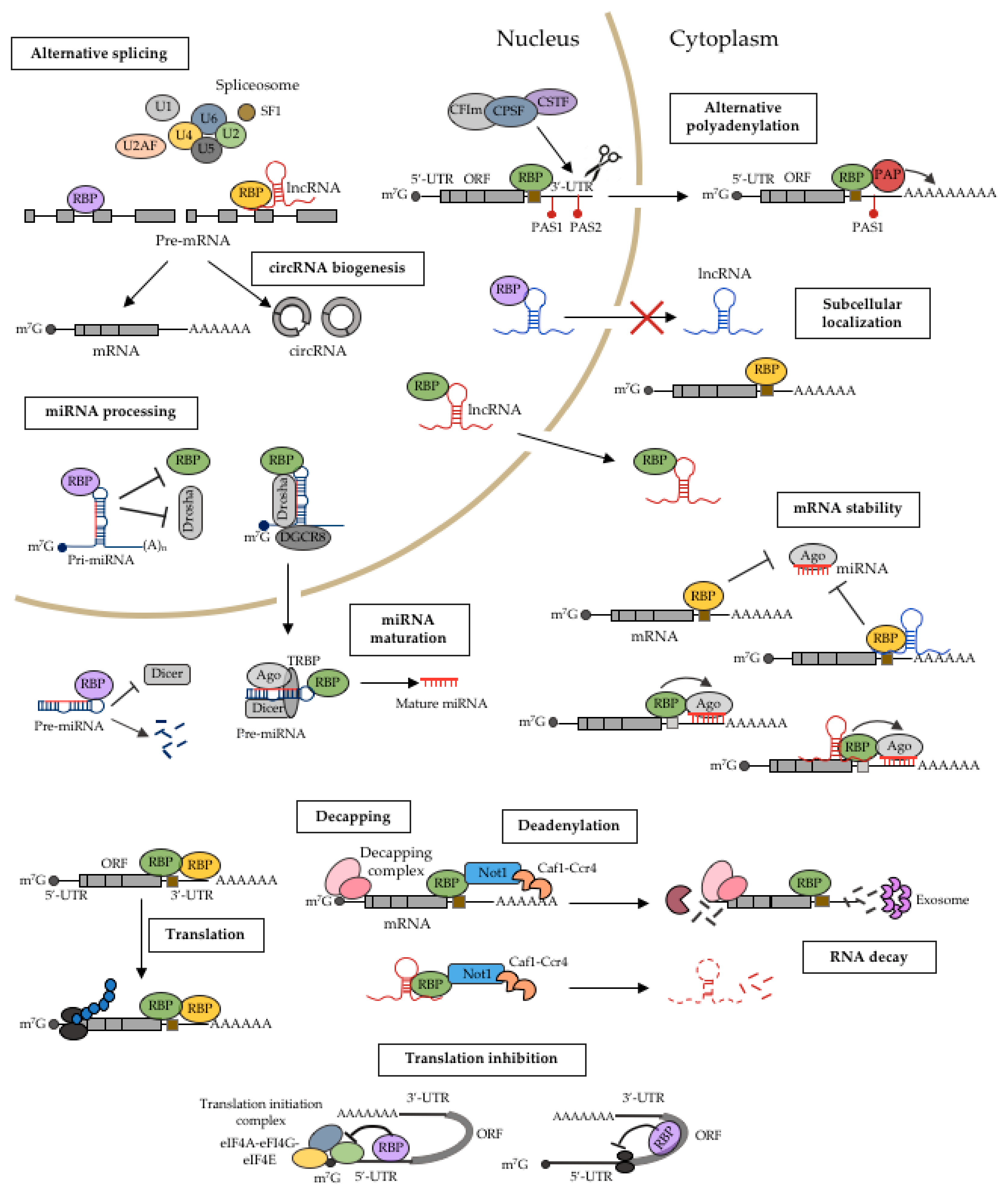 Figure 1.Mechanistic roles of RBPs in the posttranscriptional regulation of gene expression in cancer. RBPs are key regulators of gene expression at the post-transcriptional level. They can determine the fate of an RNA by regulating various events, including their miRNA-mediated processing, alternative splicing, alternative polyadenylation, subcellular localization, stability, and translation. Schematic diagrams of the functions of RBPs in these mechanisms are shown. 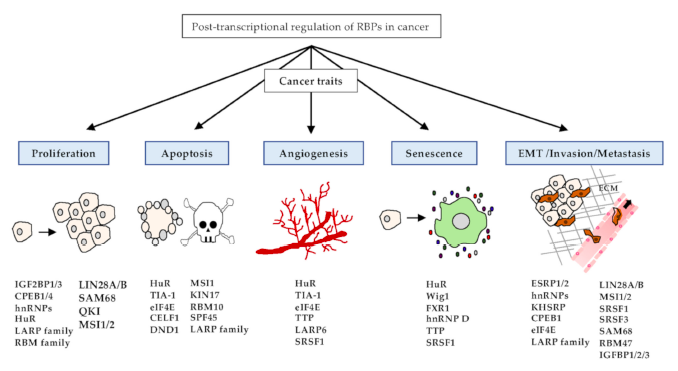 Figure 2. Functions of RBPs in cancer traits. RBPs play pivotal roles in the embodiment of various cancer traits, such as proliferation, apoptosis, angiogenesis, senescence, and EMT/invasion/metastasis. Representative RBPs of cancer traits are listed in the schematic diagram.

RNA-binding proteins (RBPs) play central roles in regulating gene expression at the post-transcriptional level. Recent advances in screening techniques have led to the identification of more than 1500 RBPs, which account for about 7.5% of all protein-coding genes in the human genome. RBPs can interact with proteins and various classes of RNAs (mRNAs, ncRNAs, tRNAs, snRNAs, snoRNAs, and others) to form ribonucleoprotein (RNP) complexes[1]. RBPs recruit various factors and enzymes, and form dierent complexes in diverse combinations to modulate the fates and/or functions of target RNAs[2][3]. Conventional RBPs have various impacts on RNA metabolism, such as by regulating microRNA (miRNA) processing and the alternative splicing, alternative polyadenylation, subcellular localization, stability, and translation of RNAs. More than half of the RBPs harbor one or more RNA-binding domains (RBDs), such as the RNA-recognition motif (RRM), K-homology (KH) domain, double strand RNA-binding domain, zinc-finger domains, PAZ domain, and others. Indeed, the RBPs can be classified by their RBDs. The RBPs use these RBDs to form sequence-dependent or structure-specific interactions with target RNAs[4]. Recent studies involving RNA interactome capture and RBP structural analysis have highlighted the nonconventional RBPs, which do not contain any canonical RBD for forming protein-RNA complexes. Numerous nonconventional RBPs have been found to participate in a broad range of biological processes, but their relationships with RNAs have not yet been fully elucidated[2][5]. Many studies have suggested that dysregulated RBPs are associated with various human diseases, including numerous cancers[6]. In cancer, aberrantly expressed RBPs regulate the expression levels of target RNAs related to cancer cell proliferation, apoptosis, angiogenesis, senescence, and epithelial-mesenchymal transition (EMT)/invasion/metastasis. In a broad sense, RBP-mediated regulation ultimately contributes to cancer development and pathology[6][7]. Given that RBPs are critical regulators of cancer, they could be promising targets of cancer therapeutics[6][7]. Thus, improving our understanding of the mechanistic, functional, and pathological roles of RBPs in cancers will contribute to providing therapeutic perspectives for cancer therapy.

Adipose tissue in the breast