Infrared spectroscopy (FT-IR) can provide very useful information on the nature of water physisorbed on zeolites. The vibrational characteristics of geomorphic clinoptilolite of natural origin and the water physically adsorbed on it have been investigated. In particular, two types of physisorbed water molecules have been identified by combining the FT-IR analysis with a mild thermal drying treatment (1h at 150°C) of the sample: the loosely-bound water and the tightly-bound water.

Recently, zeolites are being investigated for the fabrication of devices potentially useful in the sensing field[1]. In particular, these materials can be exploited as water sensors, since their ionic conductivity is depending on the environmental humidity[2]. Some zeolites of natural origin like clinoptilolite have mechanical properties suitable for the fabrication of these devices, and therefore they can be technologically exploited directly in the geomorphic form. Certain deposits of natural zeolites, including clinoptilolite, have been compressed over millions of years until their density approaches that of a zeolite single crystal (typical bulk density ~2.7gcm-3). These materials have essentially no macroporosity, and can be envisioned as solid blocks of zeolite with regular, uniform, 3Å pores. Therefore, a possible approach for developing mechanically robust devices based on zeolites is to allow nature and time to do the work for us.

Infrared spectroscopy (FT-IR) can provide very useful structural information on this class of functional materials, since the vibrations of all bonds present in the chemical structure of the zeolite generate a well defined absorption band in the FT-IR spectrum of these compounds[3]. In addition, infrared spectroscopy (FT-IR) can provide very useful information also on water molecules physisorbed on the zeolite internal/external surface[4]. Clinoptilolite is a silicoaluminate compounds, containing a largely predominating silicate component (indeed the Si/Al atomic ratio is always higher than 5). As a consequence, the analysis of the FT-IR spectrum of this zeolite could start by considering the FT-IR spectrum of a silica (SiO2) sample. The FT-IR spectrum of pure silica is very simple, indeed it includes only two resonances that are related to the stretching vibration of the Si-O bond (see Figure 1a). As visible, one very intensive resonance with a shoulder is located at ca. 907cm-1, and it is generated by the asymmetric stretching (A.S.) vibration of Si-O bonds. The second vibration resonance, generated by the symmetric stretching (S.S.) vibration of the Si-O bonds, is of medium intensity and it is located at a wavenumber of 764cm-1. According to the spectroscopic selection rules, the asymmetric stretching vibration generates a stronger absorption band because of the larger variation of the Si-O dipole moment. Absorption bands generated by the stretching vibrations of the hydroxyl (OH) groups belonging to surface silanols and water molecules adsorbed on these surface silanols have a very low intensity in a dry glass sample. These bands appear in the spectral region extending from 2500cm-1 to 3750cm-1 (see Figure 1b). Figure 2 - FT-IR spectrum of clinoptilolite of natural origin in the 600-1000cm-1 spectral range.

In addition, owing to the very large external surface development of clinoptilolite due to its mesoporosity, a broad absorption band, extending from 3000cm-1 to 3800cm-1, generated by the stretching vibration of O-H groups belonging to external silanols (Si-OH), allumino-silanols (Si-OH-Al), and water molecules adsorbed on cations (and on these external hydroxyls) is clearly visible (see Figure 3). This band is of low intensity and can be deconvoluted in three main components: the band at highest wavenumber (3610cm-1) is generated by the stretching vibration of silanols, the band at lowest wavenumber (3256cm-1) is generated by the stretching vibration of allumino-silanols and the absorption band located in the middle (3420cm-1) is generated by the OH stretching vibration of water molecules absorbed on cations and external silanols (non bonding interaction decreases the absorption resonance that in free water is at ca. 3600cm-1). The positioning of the absorption band of water can be easily verified by thermally drying the sample in air for 1h at 150°C by using an oven and comparing the FT-IR spectrum of the sample before and after such treatment. The strong attenuation which is observed for the band located at 3420cm-1 proves that it belongs to the OH vibrations of the water molecules adsorbed on cations and silanols groups on the external clinoptilolite surface. The band does not completely disappear because water located in the channels is not eliminated by this thermal treatment (water trapped in the clinoptilolite channels needs thermal annealing at higher temperatures to be removed). A very small shoulder is visible at 3700cm-1, also this band belongs to the adsorbed water molecules, and it completely disappears after the heating treatment (see Figure 3).

Figure 3 – FT-IR spectrum of clinoptilolite in the spectral region of the OH stretching absorptions before (a) and after (b) thermal treatment. 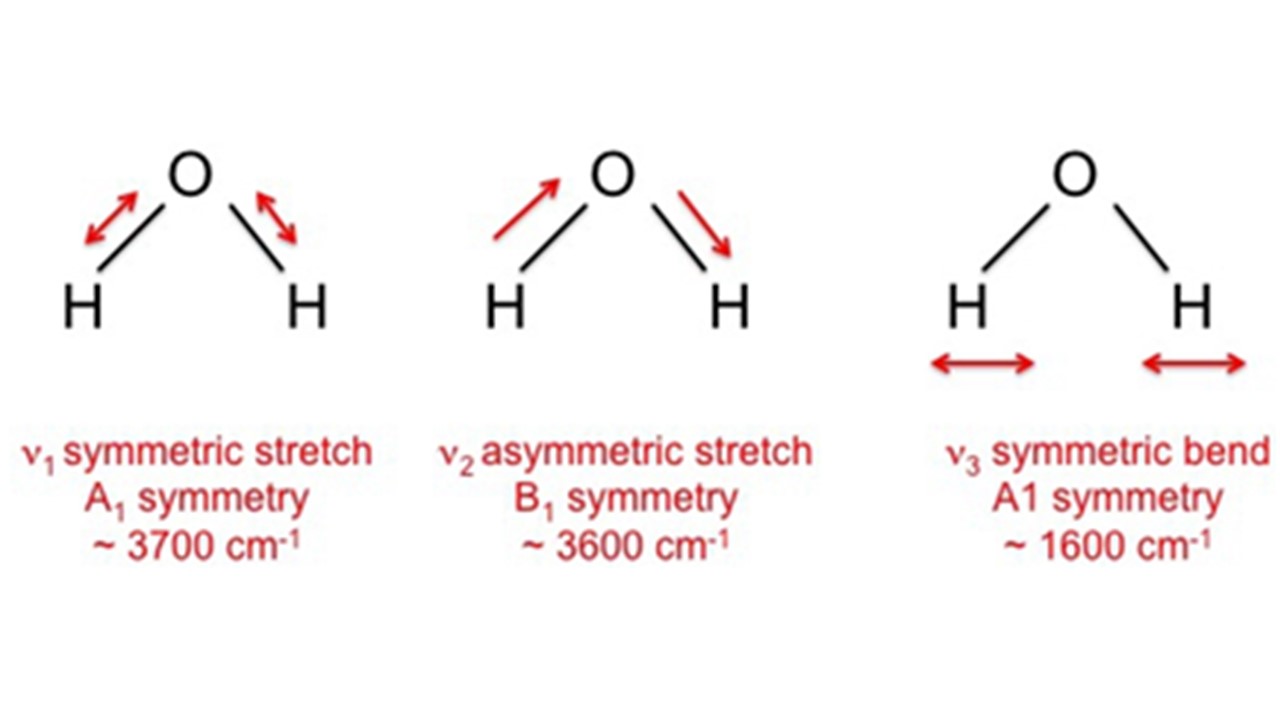 Figure 4 – Fundamental modes of vibration of a free water molecule.

Consequently, the bending vibration of hydroxyl groups of water molecules adsorbed on cations also generates the weak and sharp absorption band located at 1628cm-1 (see Figure 5). This OH bending vibration band falls in a region where there are not other resonances and therefore it can be easily detected also at very low concentrations of water molecules present in the zeolite framework. The intensity of this band (integral of the peak) does not significantly modify as a consequence of the thermal treatment, therefore this band should belong to the water molecules adsorbed on cations located inside the clinoptilolite crystal channels and the slight change in the band profile (the band becomes tight)  can be explained in terms of a redistribution of the water molecules on the cations contained in the channels. 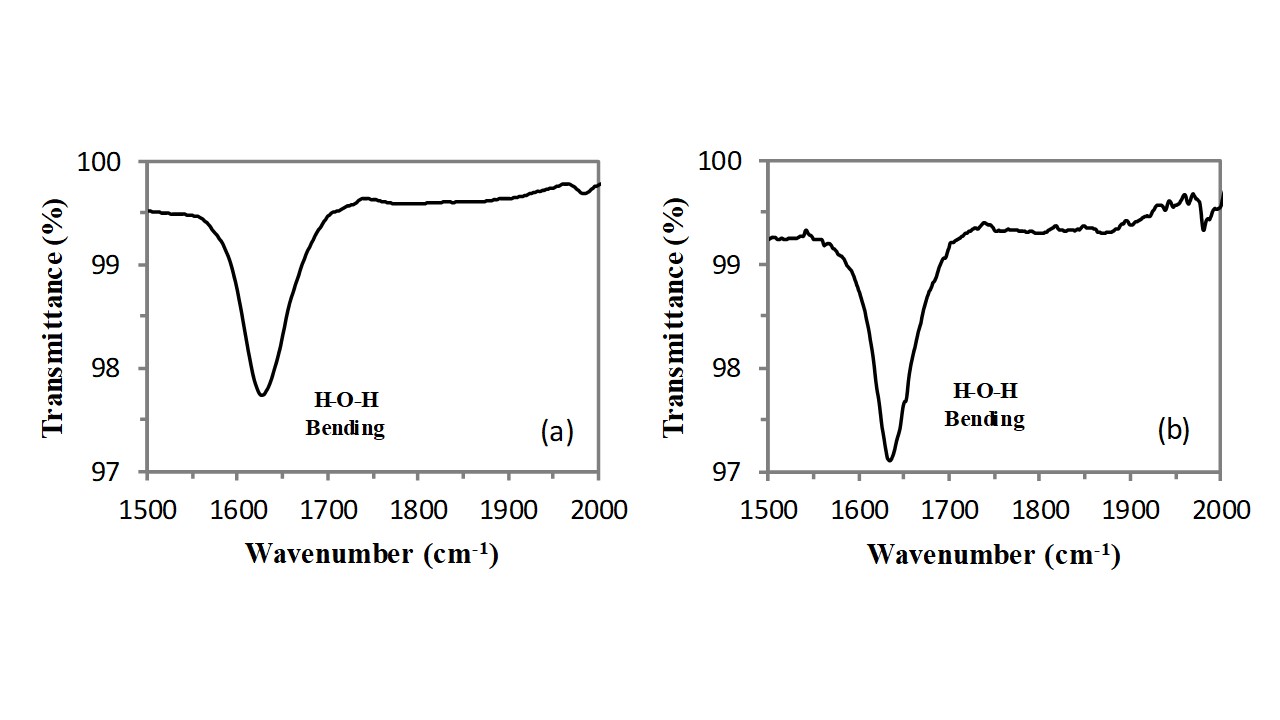 In conclusion, infrared spectroscopy (FT-IR) can be conveniently used to investigate both the zeolite structure and the nature of the physically adsorbed water. The FT-IR investigation of the clinoptilolite sample before and after a mild thermal heating (1h at ca. 150°C) has revealed the presence of two types of physically adsorbed water: (i) the water physically adsorbed on those cations that are located on the external surface of clinoptilolite lattice and on the surface belonging to the mesoporosity, and (ii) the water trapped in the channel (i.e., water molecule physically adsorbed on those cations that are located in the channels). The first type of water can be easily removed by the thermal treatment (this type of water can be referred as: ‘loosely-bound water’), such water removal is easily evidenced by FT-IR investigation because it is accompanied by the decrease of the intensity of the stretching vibration absorption bands of OH group in the water, while the second type of water (referred as ‘tightly-bound water’) is not removed by such a mild thermal drying treatment and causes the presence of residual absorption bands in the clinoptilolite FT-IR spectrum.