PD-1 and Its Ligands in Allergy

Programmed cell death 1 (PD-1) and its ligands PD-L1 and PD-L2 are receptors that act in co-stimulatory and coinhibitory immune responses. Signaling the PD-1/PD-L1 or PD-L2 pathway is essential to regulate the inflammatory responses to infections, autoimmunity, and allergies, and it has been extensively studied in cancer.

Allergic diseases are characterized by hyperreactive immune responses to otherwise innocuous antigens in the general population, the incidence and prevalence of which are increasing worldwide, particularly in the developed world. In some western countries, every third child needs medical attention from a physician caused by allergic diseases [1][2][3].
The allergic inflammatory process involves different cell types that release a range of inflammatory mediators and cytokines. Th2 cytokines, including IL-4, IL-5, and IL-13, induce IgE production, while IL-5 promotes eosinophil infiltration [4][5]. Other factors, including Th1 cytokines, may sometimes affect the clinical manifestation creating a potential tolerance induction or hyperactivity [6]. Moreover, the progression of allergy disease is mediated by the innate immune system on the respiratory or gastrointestinal tract mucosa. Indeed, antigen-presenting cells (APCs) become activated, and epithelial alarmins (IL-25, IL-31, IL-33, and TSLP) are released due to activation of the airway epithelial cells in response to allergens [7], leading to activation of Th2/mast cell/eosinophil/eosinophil-mediated allergic pathology, including IL-4 and IL-5. Another pathway is the Th1/Th17/neutrophil-mediated response to chronic innate immune activation and irreversible airway obstruction [8][9]. In addition, the high cellular plasticity in the context of type-2-driven inflammation refers to the capacity of T-helper cell subpopulations to respond depending on environmental signals differentiating into other effector cell types. For example, in chronic asthma, Th1 and Th2 cytokines contribute to airway wall remodeling. Another group of cells that respond to environmental signals are group 2 innate lymphoid cells that exhibit a dynamic phenotype in allergic airway inflammation [10]. Allergic diseases such as asthma are heterogeneous with multiple conditions. The molecular phenotypes defined based on the predominant inflammatory cell are endotypes. In this context, the type 2 immune response can be categorized into different subgroups, such as IL-5-high, IL-13-high, or IgE-high, and others [11].
In contrast, IL-10 downregulates the inflammatory process. IL-10 acts directly on CD4+ T cells, primarily by down-regulating IL-2 and other cytokines produced by Th1 cells. It also inhibits Th2 cell production of IL-4 and IL-5. On dendritic cells (DCs), monocytes and macrophages, and APCs, the effects of IL-10 include inhibition of the production of free mediator molecules in the medium, such as receptor decreases, or abolished antigen presentation and phagocytosis [12]. Thus, IL-10 plays an essential role as a regulatory molecule in both innate and adaptive immune responses, leading to immune tolerance or dampening tissue inflammation in humans. Similarly, the programmed cell death 1 (PD-1) and its ligands PD-L1 and PD-L2 play an essential role in regulating T cells activation. It controls the immune balance preventing the accumulation of self-reactive T cells [13]. PD-1 has been characterized as a negative regulator of conventional CD4+ T cells. In addition, PD-L1 and PD-L2 have an essential but oppositive role in modulating and polarizing functions of T-cells in hyperreactivity [14].

Research on PD-1 and its ligands has been performed mostly in cancer, and allergies have been under-investigated. Honjo and coworkers described PD-1 in 1992 [15]; a few years later, in 1999, its ligand PD-L1 was described by Lieping Chen [16]. PD1 is expressed on several cell types, including activated CD4+ and CD8+ T cells, B cells, natural killers (NKT), monocyte-macrophages, APCs, and tumor-infiltrating lymphocytes CD11c+ myeloid DCs [17][18][19]. PD-1 is primarily expressed on thymocytes during embryonic development and on CD4- and CD8- immature lymphocytes. It can also be expressed in naive lymphatic tissues (LTs), dormant LTs, eosinophils, basophils, and mast cells. It can also be expressed in other non-hematopoietic cell lines such as neurons, keratinocytes, endothelial cells, fibroblasts, placenta, retina, and hair follicles [20][21]. The common ɣ-chain cytokines IL-2, IL-7, IL-15, and IL-21, can induce PD-1 expression on T cells [22]. PD-1 has been related as a modulator of immune responses because PD-1–deficient mice developed autoimmune phenotypes [23]; also play a significant role in antigen presentation by DCs to CD8+ T cells by regulating ligand-induced TCR down-modulation [24].
Dong and colleagues described a third member of the B7 family, called B7-H1 (PD-L1). They reported that PD-L1 co-stimulates T cells via a receptor different from CD28, CTLA4, or ICOS (inducible co-stimulator) and delivers an activation signal to T cells [16]. PD-L1 protein is constitutively expressed on hematopoietic and non-hematopoietic cells such as DCs, granulocytes, T cells, B cells, and tumor cells [25][26][27]. In macrophages by LPS, IFN-γ, granulocyte-macrophage colony-stimulating factor (GM-CSF) and T cells, B cells plus DCs, the expression of PD-1 and its ligands are regulated by proinflammatory cytokines. IFNs, TNF-α. IL-2, IL-7 and IL-10, and IL-15 stimulate PD-L1 expression at the cell membrane. (Figure 1) [18]. A frequent administration of anti-PD-L1, such as atezolizumab, is required for cancer treatment because PD-L1 is high in circulating-myeloid cells [28]. The expression of PD-L1 within non-lymphoid tissues suggests that it may regulate the function of self-reactive immune cells in peripheral tissues or may regulate inflammatory responses [15]. PD-1 is an early brake that fine-tunes T-cell activation during antigen presentation after TCR signal transduction. PD-L1/PD-1 co-stimulation in antigen-presenting DCs contributes to PD-L1-induced TCR down-modulation [24]. Furthermore, PD-L1 stimulates the production of IL-10 by T-cells [16][29]. In contrast to PD-L1, the PD-L2 is rarely expressed on resting cells and can only be induced on DCs, macrophages, and bone marrow-derived cultured mast cells. The regulation of PD-L2 is by IL-4 and GM-CSF. PD-L2 can be induced on macrophages by IL-4 and IFNγ and DCs by anti-CD40, GM-CSF, IL-4, IFN-γ, and IL-12 [18][30]. 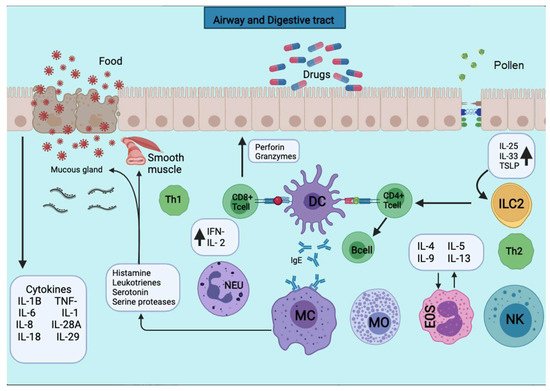 Figure 1. APCs present the antigens to the CD4+ T cells subpopulation for activation. APCs take up the first sensitizing contact with the antigen, bind it to MHC class II molecules, and expose it to the membrane. APCs take up the first sensitizing contact with the antigen, which processes and binds it to MHC class II molecules and exposes it to the membrane. Several cytokines such as TNF-a, IL-1, IL-4, IL-5, IL-6, IL-13, MIP-1a, and various colony-stimulating factors such as GM-CSF and IL-3 are released. The triggering of the allergic reaction is stimulated by the production of IgE by B lymphocytes. The production of IgE stimulates the triggering of the allergic reaction by B lymphocytes. The IgE will bind to mast cells and basophils for degranulation and the release of several mediators.
PD-L1 and PD-L2 expression depend on distinct stimuli, and their expression patterns suggest both overlapping and differential roles in immune regulation [31][32]. These new data suggest opposing results reported regarding the PD-1 function [33]. Many cytokines play an essential role in inducing or maintaining PD-L1 expression. Both in vitro and in vivo studies have proved that the expression of PD-L1 protein in APCs, regulatory T lymphocytes, and cancer cells strongly relied on the existence of proinflammatory cytokines: IL-1β, TNF-α, IL-6, as well as IL-2, IL-7, IL-15, and IL-21. Furthermore, IFNs type I and type II are the second mechanisms driven by oncogenes (cyclin D-CDK4 cascade) [29][34][35][36][37]. The role of PD-L1 is to maintain peripheral tolerance and contribute to antigen presentation to T cells by dendritic cells [35]. PD-L1 is up-regulated in response to inflammation and suppresses excessive immune responses, which may cause unnecessary tissue injury. Tumor cells that arise from normal cells adopt this mechanism to evade tumor immunity. T-lymphocyte suppression for PD-L1 in the tumor microenvironment. Likewise, PD-L1 up-regulated to inhibit apoptosis in many cells and regulate glucose metabolism [38][39]. PD-1 and its ligands appear to play an essential role in maintaining T cell homeostasis in cancer and allergic diseases.

3. PD-1 and Its Ligands in Allergy Diseases 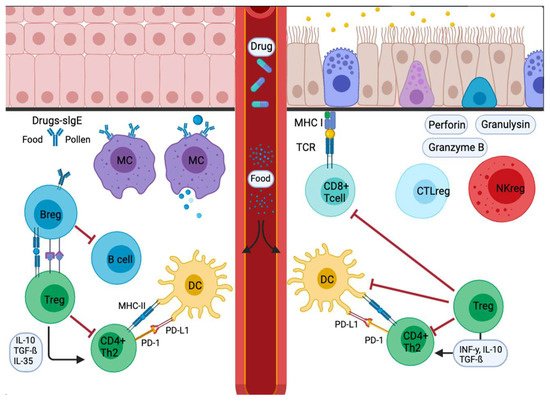 Figure 2. Signal inflammatory cascade allergy response in mucosas. Incoming allergens are taken up and processed by APCs or antibodies. Allergens cross the mucosa, then move to the lung pleura or intestine. In the sensitization stage, APCs present the antigen and give an immediate response. Others migrate to the draining lymph nodes, where the processed allergen is presented to naïve T and B cells, responses characterized and influenced by the cytokines secreted and the presence or absence of cell-bound co-stimulatory molecules. Decreased stimulus and/or the presence of IL-10, IL-35, or TGF-β triggers Treg cell transformation. In addition, APCs lead to the production of cytokines that regulate the change and expression of coinhibitory receptors such as PD1/PD-L1.