Due to their structural similarity with natural α-amino acids, α-aminophosphonic acid derivatives are known biologically active molecules. In view of the relevance of tetrasubstituted carbons in nature and medicine and the strong dependence of the biological activity of chiral molecules into their absolute configuration, the synthesis of α-aminophosphonates bearing tetrasubstituted carbons in an asymmetric fashion has grown in interest in the last decades. In the following lines, the existing literature for the synthesis of optically active tetrasubstituted α-aminophosphonates are summarized, comprising diastereoselective and enantioselective approaches.

α‑Amino acids are a key structure in living organisms as the essential part of proteins and peptides. Many α-amino acid derivatives are used in daily life, like the sweetener aspartame, penicillin derived antibiotics or antihypertensive enalapril. Due to the relevance of α-amino acids in nature, a vast number of methods for the synthesis of natural and non-natural α‑amino acids have been developed [ 1 ] [ 2 ] [ 3 ] . Within the most relevant α‑amino acid mimetics, α‑aminophosphonic acids are the result of a bioisosteric substitution of the planar carboxylic acid by a phosphonic acid group in α‑amino acid structures (Figure 1).

This isosteric replacement is of great interest since, due to the tetrahedral configuration of the phosphorus atom, α‑aminophosphonic acid derivatives can behave as stable analogues of the transition state for the cleavage of peptides, thus inhibiting enzymes involved in proteolysis processes and, consequently, they display assorted biological activities [ 4 ] [ 5 ] [ 6 ] [ 7 ] . In particular, a number of α‑aminophosphonic acid derivatives have found applications as agrochemicals [ 8 ] [ 9 ] , as well as antimicrobial [ 10 ] [ 11] [ 12 ] , antioxidant [ 13 ] [ 14 ] [ 15 ] or anticancer agents (Figure 2) [ 16 ] [ 17 ] [ 18 ] . 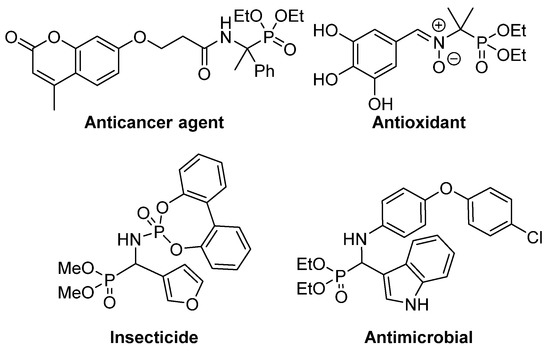 The thalidomide disaster was a shocking revelation of the strong dependence of the biological activity of chiral substrates into their absolute configuration. This dependence is also evident for α-aminophosphonic acid derivatives and, as examples, (R)-phospholeucine exhibits a stronger activity as leucine-peptidase inhibitor than its enantiomer (Figure 3) [ 19 ] [ 20 ], and the phosphopeptide (S),(R)‑alaphosphalin has a more efficient antibiotic activity than its other three possible isomers  [ 21 ] [ 22 ] .

α-Aminophosphonic acids are usually obtained from the hydrolysis of their phosphonate esters and, for this reason, the development of efficient synthetic methodologies to access enantioenriched α‑aminophosphonates has become an imperative task in organic chemistry. The existing literature to date in this field is mostly related to the synthesis of trisubstituted α‑aminophosphonates and the examples illustrating asymmetric strategies leading to the formation of the tetrasubstituted substrates are scarce [ 23 ] [ 24 ] . The efficient formation of quaternary centers is known as a critical challenge in organic synthesis [ 25 ] [ 26 ] [ 27 ] and the formation of tetrasubstituted centres from ketimines was for a long time unachievable. The poor electrophilic character of the ketimine group and the additional steric hindrance on the substrate that results in a decreased reactivity are the two main challenges to overcome. In additon, the enantiotopic faces of ketimine substrates are not as easily discriminated as those of aldimines if asymmetric syntheses are required [ 28 ] .

The existing methods for the synthesis of tetrasubstituted α‑aminophosphonates can be classified in three main groups, depending on the type of bond created in the key reaction leading to their formation, (Figure 4). The first of those approaches implies the use of strategies that entail C-C bond formation, either through the addition of carbon-nucleophiles to α‑phosphorylated imines (Figure 4, a) or functionalization of α-aminophosphonate anions with electrophiles (Figure 4, b). In addition, the most straightforward method for the synthesis of α‑aminophosphonates comprises reactions that imply C-P bond formation through the addition of phosphorus nucleophiles to ketimines (Figure 4, c). Another alternative to these approaches consists in processes that involve C-N bond formation, that are carried out mainly through electrophilic amination reactions (Figure 4, d).

In this review, the existing methodologies regarding the asymmetric synthesis of tetrasubstituted α‑aminophosphonates are summarized. The synthetic routes for the preparation of these compounds are clasified into diastereoselective and enantioselective methodoligies and grouped by the type of bond formed in the key step.

Even though some examples of stereocontrolled synthesis of tetrasubstituted α‑aminophosphonates have been reported, they are still rather limited if compared with the homologous reactions for the preparation of trisubstituted α‑aminophosphonates. In particular, during the last years, the main efforts have been focused in the enantioselective transformations, that are known to be more attractive than diastereoselective ones. It should be noted that most of the enantioselective reactions summarized in this review have been published during the last decade and, thus, more related articles are expected in the following years.

One of the most promising topics are related to nucleophilic additions to α‑phosphorylated ketimines, that have experinced an important grown during the last lustrum. Another promising topic is the enantioselective addition of phosphorus nucleophiles to ketimines. It has been slightly explored, with just a few examples reported to date but, due to the vast number of synthetic protocols for the preparation of imines known in the literature, the development of new enantioselective protocols for this transformation would represent a relevant improvement in order to expand the structural diversity of tetrasubstituted α‑aminophosphonates.