Submitted Successfully!
Thank you for your contribution! You can also upload a video entry related to this topic through the link below:
https://encyclopedia.pub/user/video_add?id=7202
Check Note
2000/2000
Japanese Apricot via RNA-Seq
Edit
Upload a video
This entry is adapted from 10.3390/genes11091079

The problem of pistil abortion in Japanese apricot is very common but has not been well studied. Therefore, in the current study, we used RNA-Seq to investigate the molecular mechanism underlying pistil abortion. This entry provides a theoretical basis for stimulating flower and pistil development and has practical significance for improving yield and quality of Japanese apricot.

Japanese apricot (Prunus mume Sieb. et Zucc) is an important fruit and ornamental plant. It has great economic importance, high profit and world market demand, and it is used in value-added products like jams, pickles, etc. [1][2]. Flower development is a fundamental stage in the life cycle of the plant and plays a significant role in the sexual reproduction process [3]. Pistil abortion is a widespread phenomenon occurring in fruit plants and has been discussed in different fruit crops like pomegranate, Xanthoceras sorbifolia and olive [4][5][6]. In Japanese apricot, the problem of pistil abortion is very common and causes serious losses, such as decrease in fruit quality and yield, thus limiting the apricot growing industry. The abortive pistils are characterized as withered or absent (no pistils) [7]. Several proteomic studies have been performed and found that glucose, starch and photosynthesis metabolisms were associated with pistil abortion [8].

In fruit trees, pistil abortion may result from improper ovary development, style formation and fertilization during flower development [9]. The rate of pistil abortion depends on the type of apricot cultivar, as the abortion rate in Japanese apricot fruit can reach up to 76.3% [10], while in some cultivars of Xinjiang apricot the pistil abortion rate can range from 60.4% to 99.64% [11]. Numerous studies showed that pistil abortion might be controlled through many factors such as the environment (light, humidity, temperature), endogenous substances and signals associated with various biological and cellular processes during floral organ formation [12].

RNA-Seq technology is extensively used to determine gene expression and the associated genetic network during flower development [22], and it has previously been used in studies of sugar apple [23], pomegranate [4] and olive [24]. The problem of pistil abortion in Japanese apricot is very common but has not been well studied. Therefore, in the current study, we used RNA-Seq to investigate the molecular mechanism underlying pistil abortion.

2. An Overview of RNA-Seq Libraries

In the current study, six different cDNA libraries were constructed for normal and abortive pistils and sequenced using Illumina sequencing, producing an average of 65.8 M raw reads per sample. After the removal of raw reads and adopter sequences, 63.27 M clean reads per sample were obtained and mapped to the P. mume genome. After mapping to the reference genome, a total of 86.64% mapped reads were obtained from each sample, while uniquely mapped reads were 63.94% per sample (Table 1).

Table 1. An overview of sequencing assembly in normal and abortive pistils of Japanese apricot.

Hierarchical clustering was performed for differentially expressed genes on the basis of their fold change values (log2fc), and the clustering is shown in Figure 1A. Pairwise comparison was used to analyze the regulation (up/down) and gene expression profiles between AP and NP. A total of 3882 unigenes (2033 up-regulated and 1849 down-regulated) were identified from normal and abortive pistil comparisons (Figure 1B). The volcano plot shows the expression level and overall distribution of differentially expressed genes between these two groups (Figure 1C). 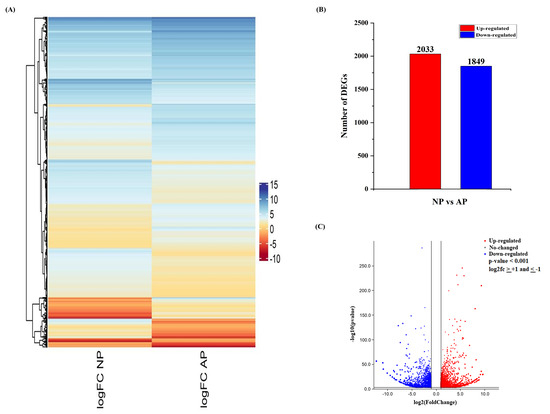 More
© Text is available under the terms and conditions of the Creative Commons Attribution (CC BY) license; additional terms may apply. By using this site, you agree to the Terms and Conditions and Privacy Policy.
Upload a video for this entry
Information
Subjects: Plant Sciences
Contributor MDPI registered users' name will be linked to their SciProfiles pages. To register with us, please refer to https://encyclopedia.pub/register :
Shahid Iqbal
View Times: 60
Revisions: 2 times (View History)
Update Time: 18 Feb 2021
Table of Contents
1000/1000
Hot Most Recent