+1 point
Thank you for your contribution! You can also upload a video entry related to this topic through the link below: https://encyclopedia.pub/user/video_add?id=34637
Check Note
2000/2000
Biogenesis of Bispyrrolidinoindoline Epi(poly)thiodioxopiperazines

Dimeric bispyrrolidinoindoline epi(poly)thiodioxopiperazines (BPI-ETPs) are a family of highly complex natural products that biogenetically derive from dioxopiperazines formed by the double intramolecular condensation of dipeptides containing tryptophan and an additional amino acid, followed by a variety of structural modifications [1][2][3]. The monomeric units contain cyclic dipeptide (CDP) substructures fused to pyrrolidinoindoline cores and feature transannular (poly)sulfide connections between C3 and C6 (for the numbering indicated in Scheme 1, see [4]) of their 2,5-dioxopiperazine rings [1]. Relevant features of these privileged structures include the conformational constraint, which has been linked to their greater stability and conformational rigidity and, therefore, higher resistance to protease degradation than acyclic counterparts, as well as their ability to cross the intestinal barrier and the blood–brain barrier [5]. The ability to mimic preferential peptide conformations, with two hydrogen bond donor and acceptor sites, favors interactions with putative biological targets. Thus, their pharmacological potency is boosted when compared with the monomeric unit through multipoint interactions on chemical space with their biological targets [6][7]. 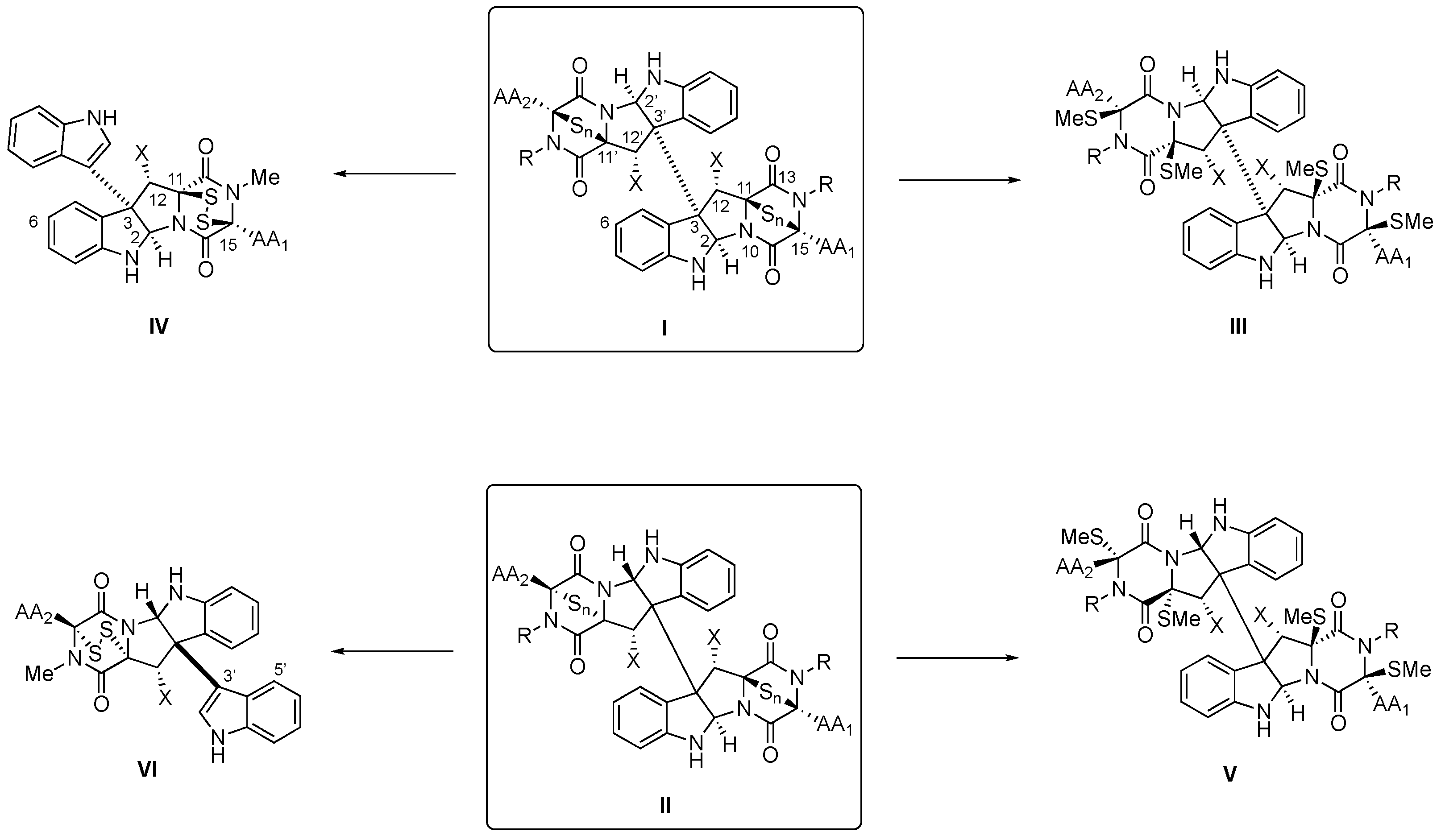 Scheme 1. General structures (and atom numbers) of tryptophan-derived BPI-ETP alkaloids (I,II), their transformation into the methylsulfanyl derivatives (III,V), and partial degradation products (IV,VI).
More than 100 alkaloids containing at least a unit of indole-derived [8] pyrrolidinoindoline epi(poly)thiodioxopiperazine (PI-ETP) [9] have already been isolated from terrestrial and marine fungi (about a third, from marine sources) [10][11][12][13], including species of the Leptosphaeria, Chaetomium, [14] Tilachlidium, Verticillium, Gliocladium, Aspergillus sp. and Penicillium genera [1][15][16], but they have also been obtained from bacteria (Streptomyces species) [17], plants, and even animals [5][13][18]. Homo- and heterodimeric BPI ETPs compose about half of the family.
(+)-Chaetocin A [19] and (+)-verticillin A [20] were first discovered in 1970, although antibacterial monomeric (−)-gliotoxin had been isolated more than 30 years before [21][22]. Relative to the monomers, the homo- and heterodimeric BPI ETP family members feature a greater level of structural diversity and complexity since the characteristic dioxopiperazine scaffold is bridged by a variable number (1 to 4) of sulfur atoms. Nondimeric family members connected at C3 through the indole nitrogen of either simple indole units or epi(poly)thiodioxopiperazines will not be covered.
Biogenetic generation of CDPs in nature usually involves either nonribosomal peptide synthetases (NRPSs) in fungi [23][24] or cyclodipeptide synthases (CDPSs) in bacteria [25][26][27]. Whereas fungi generate DKP monomers by the activation of the free amino acids through adenylation by the action of NRPSs, bacteria use cyclodipeptide synthetases (CDPSs) and employ aminoacyl-tRNAs (aa-TRNAs) as substrates [26][27][28][29][30].
The diversification of the skeleton is further achieved through the biogenetically controlled action of their tailoring enzymes, which are usually found in dedicated biosynthetic gene clusters [31]. Whereas, for the bispyrrolidinoindoline dioxopiperazine, family various types of oxidoreductases, hydrolases, transferases, and ligases have been isolated and structurally characterized [32], for the BPI-ETP family, these chemical modifications are rather limited. In addition to the role of Cyt P450 oxidation enzymes [33], as well as enzymatic dimerization [34][35], only hydroxylation/dehydroxylation processes leading ultimately to the modulation of the oxidation level of the pyrrolidinoindoline and DKP scaffolds and the amino acid side chains have been noted in some members of the family of dimeric alkaloids. In contrast, enzymes responsible for structural modifications of the DKP scaffold in simpler bispyrrolidinoindoline dioxopiperazine alkaloids have been characterized in several biogenetic gene clusters of fungal and microbial secondary metabolites [1][5][29][36][37][38][39][40][41][42].
The conformationally constrained DKP scaffold of dimeric dioxopiperazines is currently considered as privileged structures [43], given their ability to interact with several receptors, which may account for the diverse biological activities reported for this family of natural products. In addition, the reactivity of compounds with di(poli)sulfide bridges has been associated with a variety of biological activities, including protein cross-linking through the reaction of the disulfide bond with cysteine residues and the inactivation of thiol-containing proteins, generation of reactive oxygen species (ROS) via redox cycling, or ejection of zinc ions from some proteins [10][11][12][44][45][46].

Biogenetic studies of sulfur containing moieties in natural products [47], in particular those from marine organisms [48], as well as comprehensive report on the biosynthesis of pyrrolidinoindoline containing NPs, including BPI-ETPs [49], together with the flavoenzyme-catalyzed formation of disulfide bonds in natural products biosynthesis [50][51], have been previously covered. The biogenetic routes to these natural products are usually found in dedicated biosynthetic gene clusters [31][52][53].
Whereas the incorporation of sulfur to a putative dehydrodioxopiperazine was first proposed to occur immediately following the cyclodipeptide formation, N-methylation was proposed to occur after the oxidative cyclization [54]. Methionine, cysteine, and sodium sulfate jointly provide the sulfur connections of thiodioxopiperazines [10].
Most of the biosynthetic studies have been carried out on monomeric gliotoxin from Aspergillus fumigatus, in which the dioxopiperazine core is assembled by a nonribosomal peptide synthetase [55]. The presence in a fermentation broth of a cyclic dipeptide intermediate bound to glutathione suggested the latter to be the donor of sulfur atoms [56]. Gene knockout experiments revealed that gliG was responsible for encoding a glutathione sulfur transferase, namely, GliG, which incorporated the sulfur atom into the DKP framework. Prior to sulfur incorporation, the DKP should undergo an oxidation with the attachment of a hydroxyl group at the Cα-position, for which gliC was identified as the responsible P450 monooxygenase [46][55][56].
The biosynthesis of (−)-gliotoxin (4, Scheme 2A) in Aspergillus fumigatus was elucidated by Hertweck et al., after their discovery of the activation of DKPs by oxygenase GliC and the transfer of glutathione by a dedicated glutathione S-transferase, GliC [56][57], which led to the formation of bis(glutathione) adducts 2 from cFL-SL (1) and lately to the natural product from the dithiol intermediate 3 (Scheme 2) [56]. Additional insights were obtained from the large-scale fermentation of an engineered ΔgliI mutant, from which bis(cysteine) conjugates (5) were indeed isolated, en route to the dithiol intermediate 6. The step involving the dual cleavage of the C–S bonds to afford the dithiol prior to disulfide bond formation was also confirmed. The GliI C–S lyase-catalyzed reaction concomitantly forms two thiol groups, in what might reflect the dual action of the GliI homodimer [58]. 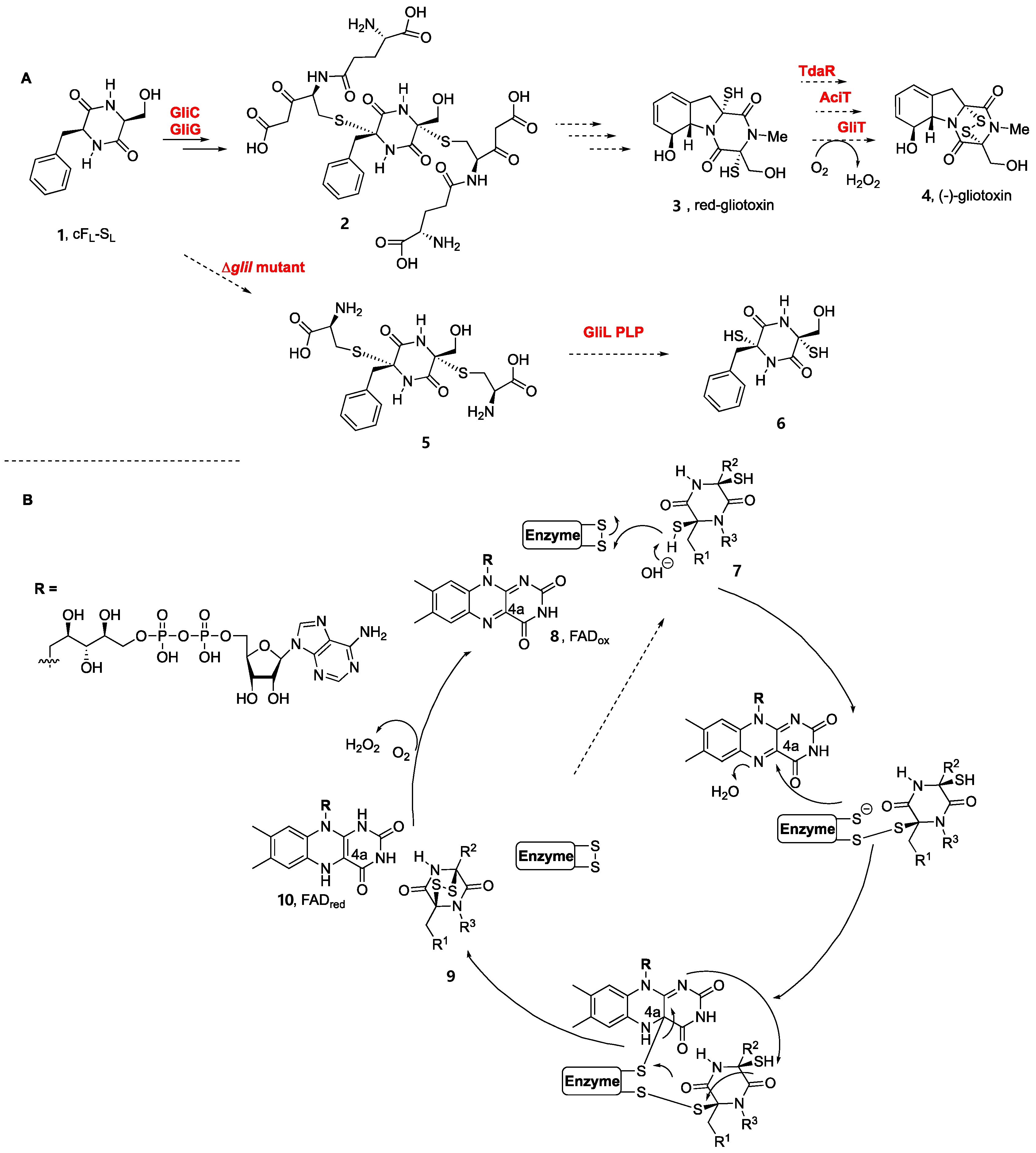 Scheme 2. (A) Biogenetic route to pyrrolidinoindoline epidithiodioxopiperazine (−)-gliotoxin (7) [56]. (B) Proposal for enzymatic disulfide bond formation [35].
More recent studies on the biogenesis of pretrichodermamide A (not shown) containing a formal α,β-disulfide (instead of the α,α-disulfide of this series) in Trichoderma hypoxylon confirmed that the formation of the disulfide bond to generate the epidithiodioxopiperazine was promoted by an FAD (8)-dependent oxidoreductase (Scheme 2B). The thiol disulfide oxidases promoted the disulfide bond formation from dithiol 7 to disulfide 9 with substrate and catalytic promiscuities. Not only the disulfide bond of pretrichodermamide A (not shown) (TdaR) but also those of aspirochlorine (not shown) (AclT) and gliotoxin (GliT) were generated efficiently (see Scheme 2B) [35].
The biosynthetic gene cluster (cha) of (+)-chaetocin A was identified in the producing fungi Chaetomium virescens ATCC 26417 through bioinformatic comparison with the BGCs of (−)-gliotoxin and sirodesmin (not shown) [59]. Three cytochrome P450 enzymes (ChaB, ChaC, and ChaE) were identified as part of the cha cluster. Although the gene cluster cha from Chaetomium virescens ATCC 26417 was proposed to generate (+)-chaetocin A (11, Scheme 3) [59], through radical dimerization, it has not been possible to express ChaE and confirm its activity. Given that detailed information on the tailoring of the glutathione adduct by the γ-glutamylcyclotransferase to generate the DKP disulfide, the timing of sulfuration, the DKP release, and the dimerization, has not yet been clarified, the biogenesis of these natural compounds is still uncertain [59]. 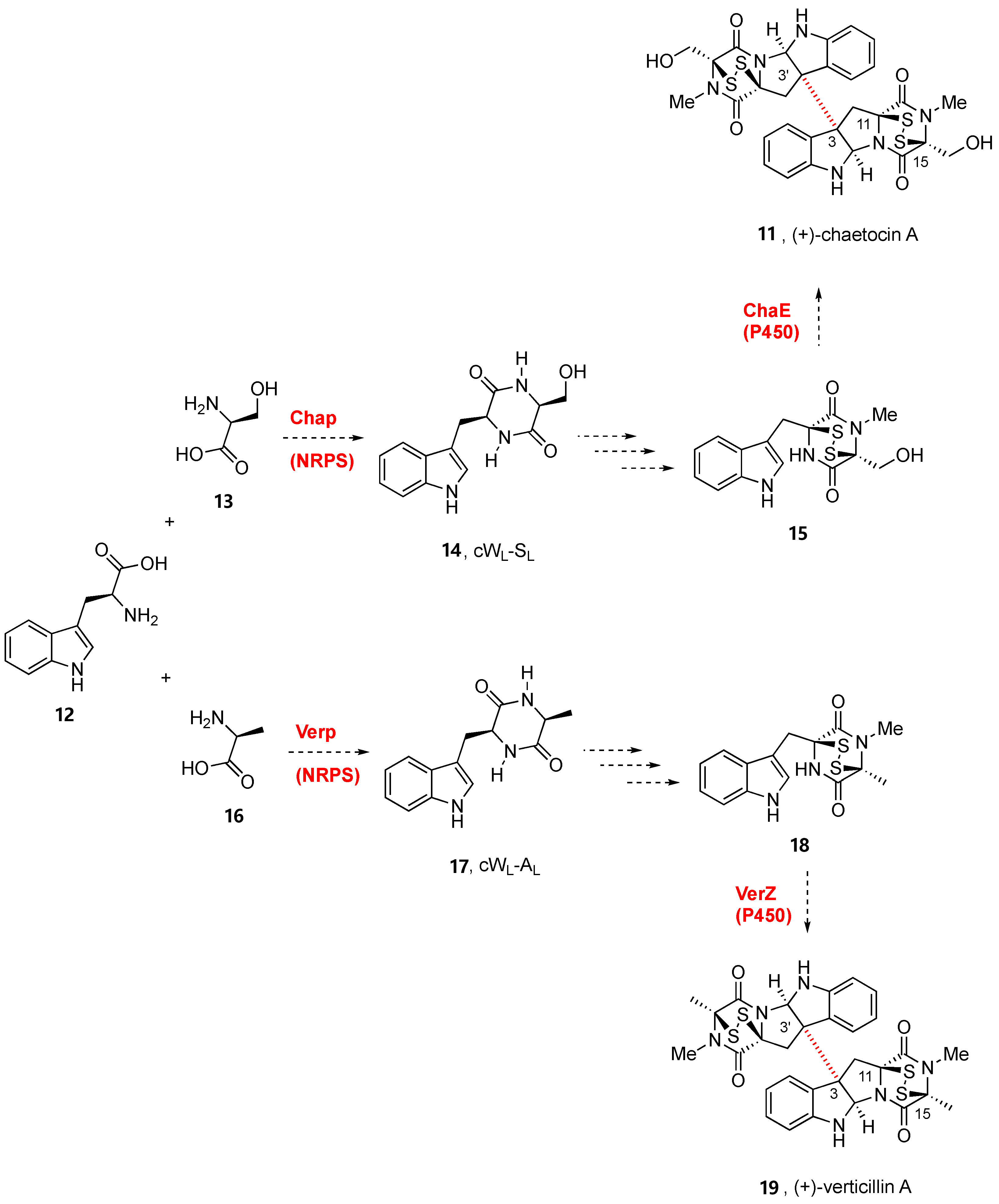 Scheme 3. Biogenetic routes to BPI-ETP alkaloids.
The discovery of the gene cluster for the biosynthesis of (+)-verticillin A (19, Scheme 3) [60] confirmed that verP encoded a NPRS in connection with other genes besides verA and verK. The disulfide bond formation by oxidation of the dithiols was likely promoted by VerT, similar to GliT, and verZ controls the production of the natural product [61]. The biogenesis of (+)-verticillin A (19) was abolished by the disruption of verM or verG, encoding a putative O-methyltransferase and a glutathione S-methyltransferase, respectively [60][61]. These mutants produced unrelated metabolites termed gliocladiosin A and B (structures not shown). No additional mechanistic details have been reported for the series.
The biosynthetic gene cluster of (+)-verticillin A (19) from the Cordyceps-colonizing fungus Clonostachys rogersoniana (formerly known as Gliocladium sp.) isolated from the Cordycep fruiting body collected in Tibet Linzhi County (China) has more recently been identified and cloned (Scheme 3). Based on the sequence of a nonribosomal peptide synthetase (ChaP), which was predicted to be responsible for (+)-chaetocin A (11) biosynthesis in C. virescens, the verticillin biosynthetic gene cluster (ver) was constructed. Disruption of the nonribosomal peptide synthetase gene verP in the ver cluster was shown to abolish the production of (+)-verticillin A (19) [62]. Disruption of the O-methyltransferase gene verM on the same species stopped the production of (+)-verticillin A (19) and allowed for isolating two cryptic compounds (not shown), which were identified as dipeptides conjugated with macrolides [63].

More
© Text is available under the terms and conditions of the Creative Commons Attribution (CC BY) license; additional terms may apply. By using this site, you agree to the Terms and Conditions and Privacy Policy.
Upload a video for this entry
Information
Subjects: Chemistry, Organic
Contributors MDPI registered users' name will be linked to their SciProfiles pages. To register with us, please refer to https://encyclopedia.pub/register :
Claudio Martínez
,
Patricia García-Domínguez
,
Rosana Álvarez
,
Angel R. de Lera
View Times: 65
Revisions: 3 times (View History)
Update Time: 18 Nov 2022
Table of Contents
1000/1000
Hot Most Recent