+1 point
Thank you for your contribution! You can also upload a video entry related to this topic through the link below: https://encyclopedia.pub/user/video_add?id=34508
Check Note
2000/2000
Menas Kafatos

Edit
Upload a video
The content is sourced from: https://handwiki.org/wiki/Biography:Menas_Kafatos
spirituality nonlocal religion 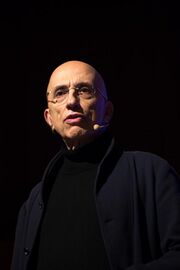 Menas C. Kafatos (Greek: Μηνάς Καφάτος; born 25 March 1945) is an American physicist of Greek descent and a writer on spirituality and science. His publications include: The Nonlocal Universe and The Conscious Universe. Kafatos has written and lectured extensively promoting discourse between science, spirituality, and religion. He has held numerous positions at institutions including Chapman University, George Mason University, and NASA Goddard Space Flight Center.

Kafatos received his B.A. in Physics from Cornell University in 1967 and a Ph.D. in Physics from the Massachusetts Institute of Technology (MIT) in 1972.[1] After postdoctoral work at NASA Goddard Space Flight Center, he joined George Mason University and was University Professor of Interdisciplinary Sciences from 1984-2008, where he also served as Dean of the School of Computational Sciences and Director of the Center for Earth Observing and Space Research.[1] He and a team of computational scientists joined Chapman University in the fall of 2008, where he was the Founding Dean of the Schmid College of Science and Technology serving as dean from 2009 – 2012.[1] He currently is the director of the Center of Excellence in Earth Systems Modeling and Observations (CEESMO).

Kafatos has authored books including The Conscious Universe, The Non-local Universe (with Robert Nadeau, Springer-Verlag and Oxford University Press), Principles of Integrative Science (with Mihai Draganescu, Romanian Academy of Sciences Press), and more than 300 peer reviewed publications, cited by over 750 other articles.[2]

Kafatos' peer-reviewed research has focused on cosmology, astrophysics, natural hazards, climate change, Earth system science, and remote sensing. Although he has written books around meta-physical interpretations of quantum phenomena he does not have substantial peer-reviewed work in quantum physics.[3]

Notable scientific contributions include enhancements to synthetic tropical cyclone (hurricane) circulations used in forecast models,[4] new perspectives on the self organization of the universe through the lens of complexity,[5][6] a detailed look at the relationship between vegetation in the United States and El Niño/Southern Oscillation,[7] and a better understanding of dust and aerosols over India .[8][9]

Professor of physics Sadri Hassani wrote of Kafatos when reviewing the book Kafatos co-wrote with Deepak Chopra You Are the Universe: Discovering Your Cosmic Self and Why it Matters that he (Kafatos) knows little of quantum theory (QT), he only relates QT to the "alleged mystical relation with consciousness". Hassani writes, His lack of understanding of even the basics of QT shows up on page 116: "'Electrons, at least for the lowest orbits, travel in a perfect circle around the nucleus of an atom.' Every physics sophomore learns that the idea of an orbit violates the uncertainty principle". Hassani also questions claims that Kafatos is well-respected in the world of physics stating, "'He is as much respected in the physics community as Chopra is in the medical community'".[10]

Kafatos lives in Marina Del Rey, CA with his wife Susan Yang, a scientist in the fields of computational biology, experimental biology, and neuroscience. They met while working together at George Mason University. His brother, Fotis Kafatos, is a biologist and founder and Honorary President of the European Research Council (ERC). Kafatos has 3 children: Lefteris, Stefanos, and Alexios. He is the Chairman of the Board for the American Hellenic Council.