+1 point
Thank you for your contribution! You can also upload a video entry related to this topic through the link below: https://encyclopedia.pub/user/video_add?id=32771
Check Note
2000/2000
Dialysis as a Cancer Treatment

Reprogramming of energy metabolism is a hallmark of cancer cells [1], which is well known to support their rapid proliferation. Survival is an evident cancer cell need and four major metabolic changes related to survival have been identified: first, glycolysis is increased and has been shown to support the reduction of oxidative stress through multiple pathways linked to glycolysis; second, glutaminolysis has been shown to fuel other metabolic pathways also essential for the reduction of oxidative stress; third, both glycolysis and glutaminolysis fuel pathways that support the suppression of the host’s immune system in the tumor micro environment (TME), essential for cancer survival; and fourth, histone de-acetylases (HDAC) has been shown to be overexpressed in cancer cells and linked to cancer survival by improving the resilience of malignant cells to apoptosis and inducing immune suppression.
Ketone bodies serve as an excellent energy fuel for healthy cells and are primarily used for ATP production through the Krebs cycle in the mitochondria, utilizing OXPHOS and oxygen when other energy sources are limited. This stands in contrast to glucose and glutamine, which can be anaerobically used for numerous metabolites important for cancer survival and progression including energy production (ATP) [2][3][4][5]. Interestingly, ketone bodies have been shown to be inhibitors of class I and IIa HDACs and reduce several epigenetic alterations important for cancer survival [6][7][8].
Many cancers have a very short long-term survival rate, the 5-year survival rate is <10% for glioblastoma [9] and pancreatic cancer [10]. For most advanced cancers, therapy resistance limits the benefit of any single-agent chemotherapy, radiotherapy, or immunotherapy [11][12][13][14][15]. Therefore, some 5000 clinical trials are ongoing globally to probe the clinical benefit of new combination treatments [16]. The cancer cell resistance towards TCT has many causes [11][17][18]. An important one is the plasticity of tumor cells that may lead to the development of drug resistance, and therefore, the need for new cancer therapies targeting a multitude of mechanisms [16].
The novel concept described herein suggests using dialysis, to reduce levels of both glucose and glutamine, as an adjuvant cancer treatment to increase efficiency and reduce side effects of traditional cancer treatments (TCTs). The goal with the suggested dialysis treatment is to timely shift the patient’s metabolic state, usually depending on glucose and glutamine, to another physiological state (ketogenic condition (KC) and low glutamine levels)—where all cells, including tumor cells, mainly must depend on ketone bodies for their cell energy metabolism. Such a dialysis treatment will induce a potentially harmful metabolic condition for cancer cells, mimicking the physiological KC obtained after fasting for many days or even weeks [19][20].
Dialysis is able to decrease the systemic levels of glucose and glutamine, two main nutrients, essential for cancer cell survival and proliferation, and at the same time support increased ketone bodies in the blood to secure metabolites for non-cancer cell ATP need through OXPHOS (Figure 1) [4][21][22][23][24]. 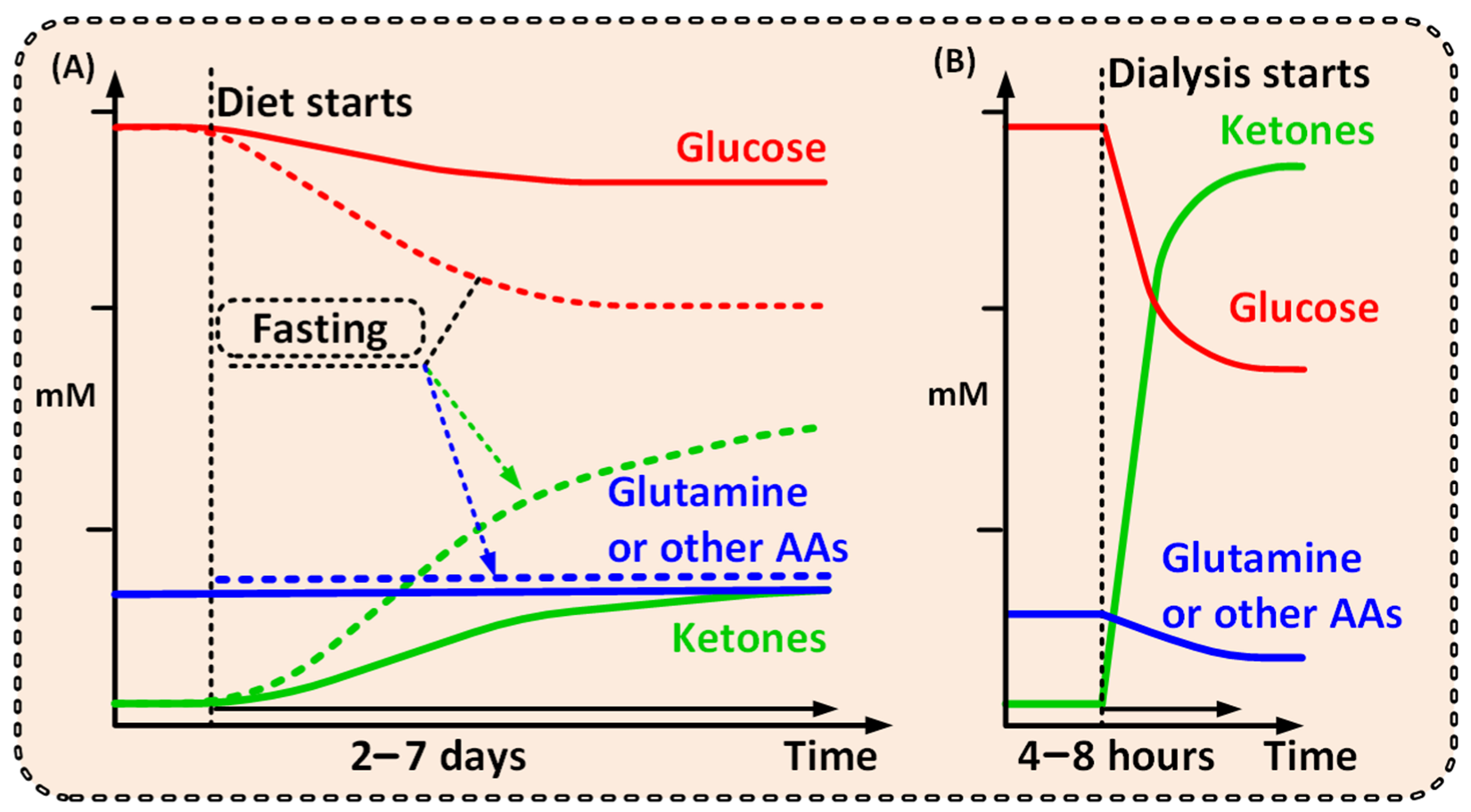 Figure 1. Graphs outlining the possible differences between the metabolite levels achieved over time from (A) a ketogenic diet [25][26] or fast [20][27], and from (B) dialysis. A comparably short dialysis treatment would shift the patient to a ketogenic metabolic condition, where high ketone and low glutamine levels will be unfavorable for cancer cells, but not healthy cells. A short dialysis treatment shifts the patient from one metabolic condition to another, unfavorable for the cancer but not for the patient as a whole.
To achieve a ketogenic condition with low glutamine levels, in conjunction with TCT, may boost the effectiveness of those treatments in similar ways as ketogenic diet and/or different types of glycolysis or glutaminolysis inhibitors are known to do [4][5][28].
Notably, a strict ketogenic diet would need to be maintained for days or even weeks and would naturally lead to a less pronounced metabolic shift (Figure 1) [19][20][25]. Additionally, several studies have shown that ketogenic diet has very poor cancer patient compliance and is hard to follow over time [19][29]. Dialysis, however, will have the power to create a significantly more prominent and well-defined metabolic shift compared with that of the ketogenic diet—and thus a more pronounced clinical effect (Figure 1) [26].
With the exception of lipids, all metabolic fuels in the human blood such as glucose, ketone bodies (KB), lactate, and amino acids (AAs), are small water-soluble substances that can be readily exchanged during dialysis. With dialysis, glucose [22] and glutamine [21] levels will be reduced, and simultaneous addition of KB (orally, intravenously, or by adding them to the dialysis fluid), could increase KB levels within a range of 2–8 mmol/L in blood [30] within one to two hours. Notably, ketoacidosis is a serious side effect of ketogenesis (not the presence of KB per se) that mainly occurs in type 1 diabetes. Ketoacidosis will not be induced when external KB is supplied [31]—thus avoiding this unwanted side effect.

Abnormal metabolism in cancer cells has been observed for close to a century and is today after almost 100 years recognized as a hallmark of cancer [1]. Cancer cells rewire their metabolism, and two common features of this altered metabolism are increased dependence on glucose and glutamine; exactly how and why cancer cells do this is not fully resolved. Nonetheless, this metabolic rewiring has multiple functions in cancer, including bolstering of cancer cell survival—resulting in an increased resistance to TCTs.
By changing the metabolite levels with dialysis as suggested, the cancer environment will change and consequently several anticipated anti-cancerogenic effects may occur (Figure 2). Thus, the changes imposed by dialysis may amplify the effectiveness of TCT. Increased KBs and reduced glucose and glutamine levels may increase the cancer cell’s dependency on mitochondrial ATP production and reduce the ability to handle oxidative stress by upregulating the pentose phosphate pathway (PPP), the one carbon metabolism (1CM), and glutaminolysis [4][5][23][24][32]. Reduced glucose and glutamine levels and increased ketone body metabolism lead to increased mitochondrial ATP production and have been shown to reduce oxidative stress in healthy cells [32][33][34] and increase oxidative stress in cancer [2][34][35][36]. By reducing lactate and increasing pH in the TME, the immunologic response to cancer cells may increase [37][38]. Furthermore, KBs have, at physiological levels (typical for fasting), been shown to inhibit HDAC class I and class IIa, and many cancers show an increased expression of these HDACs [6][8][39][40][41].

Figure 2. Suggested effects of CancerDialysis on the efficacy of TCT. (↑) indicates an increase and (↓) indicates a decrease.
Consequently, to force KC by dialysis during a four-to-eight-hour treatment will induce a multitude of changes potentially harmful for cancer—and if done in conjunction with TCTs, potentially augment their efficacy.

More
© Text is available under the terms and conditions of the Creative Commons Attribution (CC BY) license; additional terms may apply. By using this site, you agree to the Terms and Conditions and Privacy Policy.
Upload a video for this entry
Information
Subjects: Oncology
Contributor MDPI registered users' name will be linked to their SciProfiles pages. To register with us, please refer to https://encyclopedia.pub/register :
Viktoria Roos
View Times: 19
Revisions: 2 times (View History)
Update Time: 04 Nov 2022
Table of Contents
1000/1000
Hot Most Recent