+1 point
Thank you for your contribution! You can also upload a video entry related to this topic through the link below: https://encyclopedia.pub/user/video_add?id=21537
Check Note
2000/2000
Tailoring Nanoadsorbent Surfaces for Recycling of LTM

A series of adsorbents were tailored for selective extraction of rare earth elements (REE) and late transition metals (LTM) via grafting of ligands bearing specific N- and S-donor functions. All obtained adsorbents showed relatively quick uptake kinetics and high adsorption capacity 0.5 to 1.8 mmol/g, depending on the function and the target metal ion. The adsorption equilibrium data analyzed and fitted well to Langmuir isotherm model revealing monolayer adsorption process on homogeneously functionalized silica nanoparticles (NPs). Most of the employed ligands demonstrated higher affinity towards LTM compared to REE, related to the nature of the functional groups and their arrangement on the surface of nanoadsorbent.

During the past few decades, there has been a continuous increase in the applications of Rare Earth Elements (REE) and their alloys, making them critical elements for development of modern industries [1]. The main target markets using REEs include magnets, metallurgy, catalysts, polishing powders, batteries, mobile phones and other high-technology gadgets. With their growing demand and continuous supply risk, urban mining of REEs from different end-of-life products and industrial waste has gained increasing attention [2]. As such, permanent magnets, which have various applications in the development of new technological devices as well as for green energy production, are one of the most promising secondary sources of REEs that can be recycled and reused [3]. Common Rare Earth-based magnets include Neodymium–iron–boron (FeNdB) and Samarium–cobalt (SmCo) magnets [4]. One of the key challenges in the recycling of magnet materials lies in the need to separate REE from Late Transition Metals (LTM), which form their constituents or major materials of their casings [5]. The most common technology for REE separation is acidic leaching with different leaching agents such as hydrochloric and sulfuric acids [6][7]. Iron is the major component in FeNdB and in the casing of magnets in electronics. It needs to be removed in the step previous to the separation of all other components, for both economic and technical reasons. The well-established approaches for separation of iron from leachates include either precipitation of iron hydroxide during controlled elevation of pH [8] or the precipitation of all other components apart from iron by addition of oxalic acid and organic base [9]. The precipitate can then be calcined and re-dissolved in acid. Subsequent separation of the components can be achieved by solvent extraction, ion exchange, or adsorption [10]. Most of the established industrial methods require, however, repeated steps to obtain the desired purity, thus generating large amounts of hazardous and, in the case of primary ore treatment, even radioactive waste [11][12]. As an alternative to the traditionally used methods, the application of solid-phase extraction (SPE) using nanosized functional adsorbents has been proven to be an effective and more environmentally friendly method for REE recovery [13]. Various types of nanosorbents have been synthesized for SPE recovery of REEs [14][15][16][17][18][19][20][21]. Several reviews have already been devoted to the discussion of the advantages and challenges in the application of functional solid adsorbents for REE separation [22][23]. Recent works have shown that organic–inorganic functionalized silica nanoparticles possess great adsorption capacity and selectivity towards many metal ions, including heavy metals and REEs [24]. Functional groups such as iminodiacetic acid (IDA), diethylenetriaminepentaacetic acid (DTPA), ethylenediaminetetraacetic acid (EDTA) and triethylenetetraminehexaacetic acid (TTHA) were grafted on dense SiO2 nanoparticles as well as SiO2 core–shell magnetic nanoparticles and tested for different REEs adsorption and separation. High adsorption capacities of up to 300 mg of RE3+/g were reached, and distinct selectivity trends towards different REEs depending on the complexonate [25][26][27].
The majority of earlier successfully applied ligands belonged to the classes of either complexons, i.e., amino carboxylic acids [28], or crown ethers/cyclenes. These types of ligands revealed strong affinity to both REE and LTM. In this entry, the new ligands (N-(2-Aminoethyl)-3-aminopropyltrimethoxysilane L1 and N-(2-Aminoethyl)-3-AminoIsobutylmethyl Dimethoxysilane L4—a derivative of ethylene diamine, known for high affinity to Ni2+ and Cu2+ and, to a lesser extent, for Co2+ [29][30][31]; 2-(2-Pyridilethyl) Thiopropyltrimethoxysilane L2—a derivative of pyridine with potentially good affinity to LTM and also a sulfur bridge [32][33]; and Triethoxy(3-isothiocyanatopropyl)silane L3 and Triethoxy(3-thiocyanatopropyl)silane L5—derived from isothiocyanate with potential affinity to Ni2+ and Co2+ [34], were selected and grafted on SiO2 nanoparticles to achieve selectivity for separating LTM from REEs in mixed solutions (Figure 1). 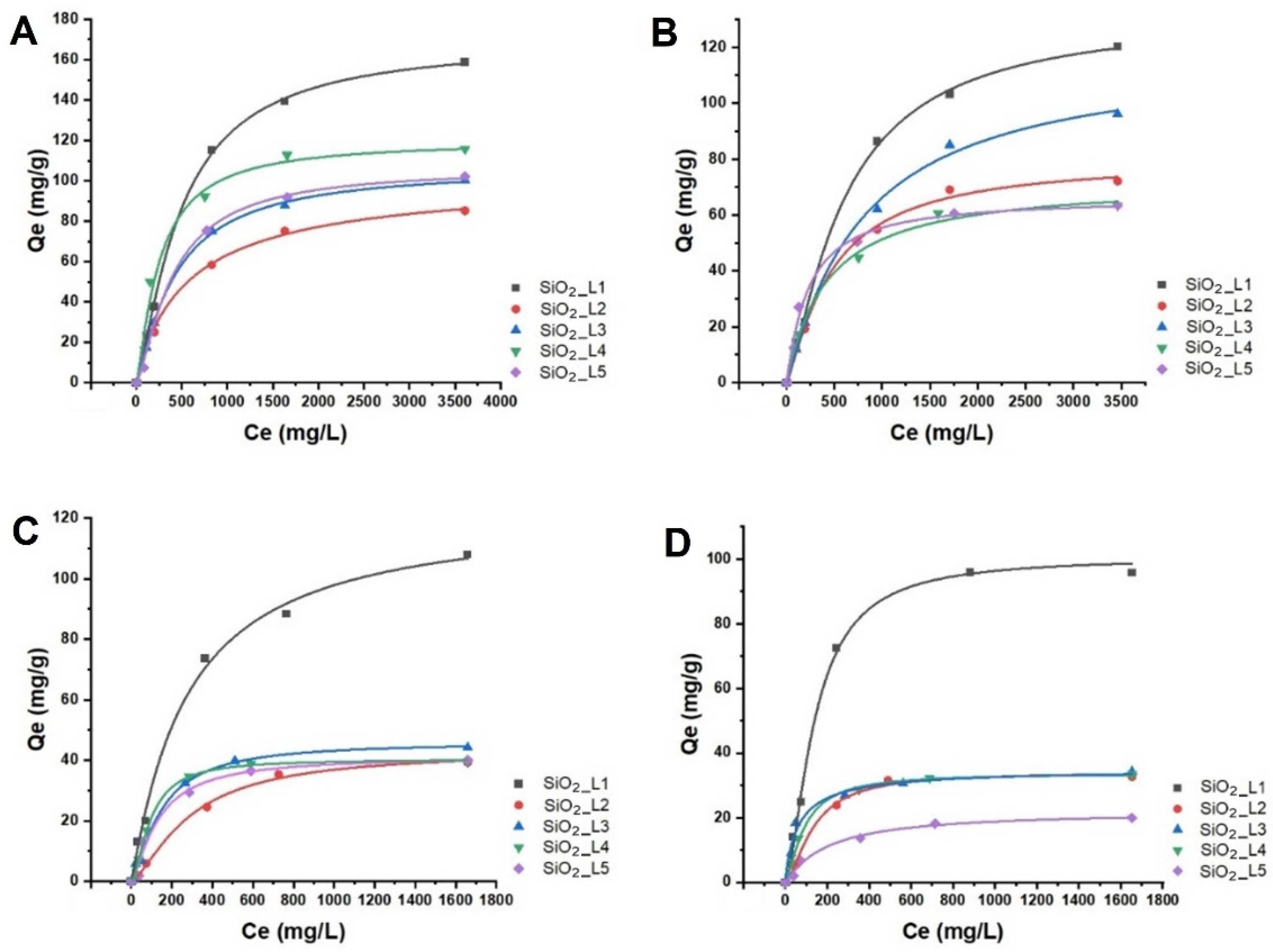 Figure 2. Langmuir adsorption isotherms of (A) Sm, (B) Nd, (C) Co and (D) Ni ions onto functionalized silica nanoparticles.
Table 1. Maximum adsorption capacities of grafted SiO2 NPs towards REEs and LTM.
Many silica-based adsorbents have previously been tested for REE and LTM removal from aqueous solutions. Table 2 summarizes various results with silica-based and other adsorbent materials for their maximum uptake capacity. It can be noted that SiO2_Ln nanoparticles present a competitive performance for the binding of selected metals. Some materials have significantly high sorption properties; however, in most cases, the organosilane-functionalized NPs have comparable or higher adsorption capacities.
Table 2. Maximum adsorption capacities of different adsorbents towards REEs and LTM.
It has to be mentioned that selective separation of REE from LTM by functional nanoadsorbents has so far not been addressed in the literature.
To understand the adsorption mechanism pathways, and characterize the adsorption equilibria, the experimental data were interpreted by linear and non-linear Langmuir (Figure 5). Consistent with the correlation coefficient (R2) values, the Langmuir model showed better fit both in linear and non-linear forms, suggesting that the adsorption was a monolayer process on the surface of functionalized silica nanoparticles.
Better insights into the molecular mechanisms of adsorption require application of structure-sensitive characterization techniques. In the present work, researchers recorded calibrated UV-Vis spectra of adsorbents before and after uptake of LTM. The spectra reveal a distinct shift of the adsorption maximum for the Co2+-derived materials, indicating that uptake of this cation presumably proceeds via formation of inner-sphere complexes with surface ligands. An image demonstrating the potential binding geometry is provided. More detailed insight into coordination of adsorbed cations would require more in-depth investigation with techniques such as, for example, X-ray absorption spectroscopy, applying well-defined structural models from X-ray diffraction studies of relevant model compounds, and will be reported separately later.

Scheme 1. Schematic representation of potential binding mechanism of SiO2_L1 with metal cations.
The adsorption kinetics showed that most of the uptake (60–80%) occurred within the first 1–2 h of interaction of metals with silica nanoparticles. Slower adsorption continues, and equilibrium is reached after 3–5 h (Figure 3). 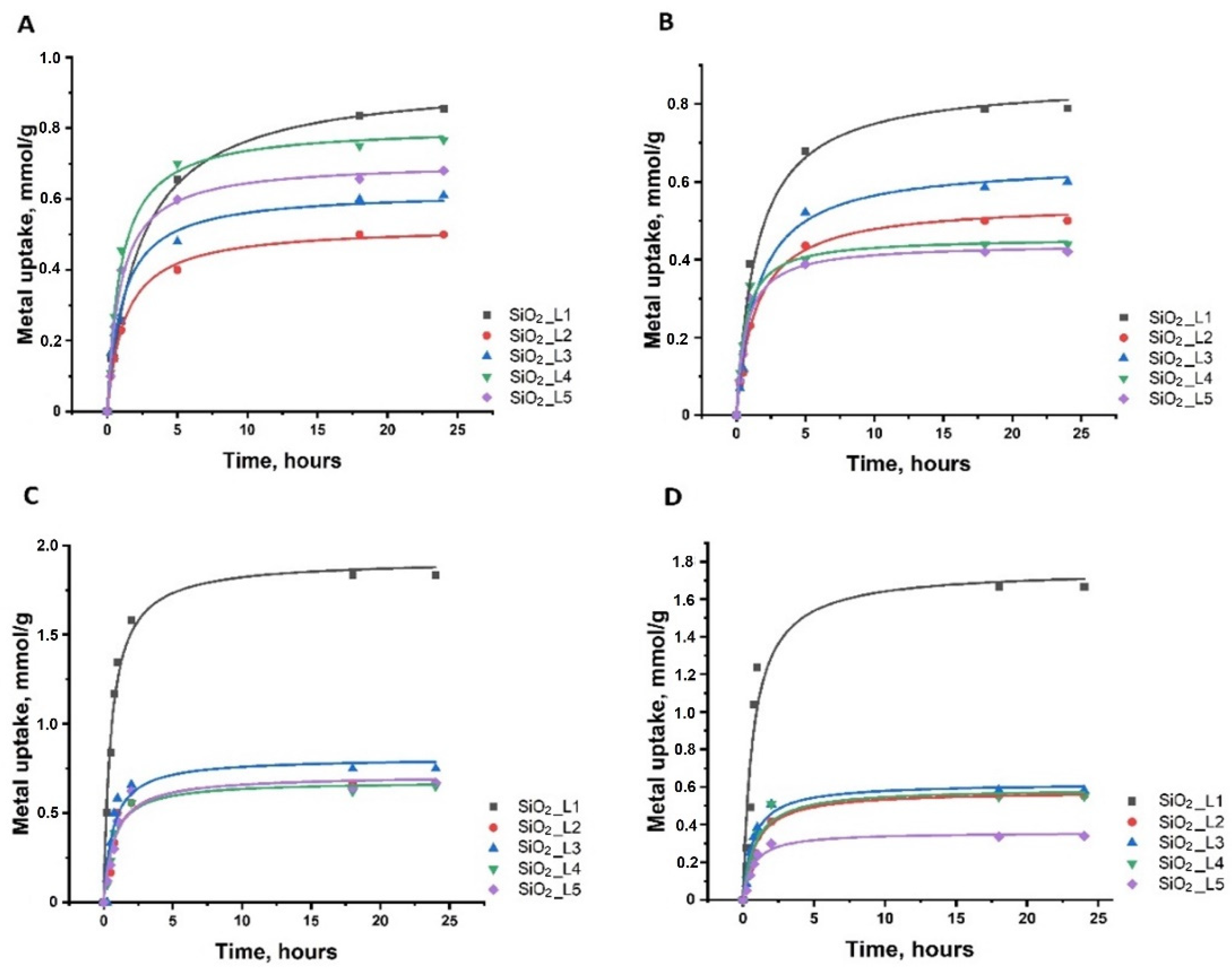 EDS spectroscopy was used to analyze the composition of SiO2 NPs with different functional groups after adsorption tests with mixtures of metal ions (Nd/Ni, Co/Sm and Ni/Co). Although this technique is able to provide only surface and local information for dense samples, for nano powders such as those used in this work, EDS with its penetration depth of about 1 μm and spot size not less than 100 nm actually provides averaged information about the volume of the material. For most of the samples, researchers could clearly observe selectivity towards a specific metal ion. Thus, for example, SiO2 with ligand L1 (SiO2_L1) demonstrated high selectivity towards Ni ions both in the mixture with REEs and with Co ions. On the other hand, both SiO2_L2 and SiO2_L3 had better selectivity towards Co ions. These results were actually quite unexpected and exciting. The provided functions were supposed to reveal enhanced affinity to LTM, but the experimental results confirmed this supposition only for L1, and not L2–5. The factor that might have been underestimated in building the adsorbent surface is the potential distance between the functions, defined by the grafting density on the silica surface. As earlier studies of molecular models have indicated, the distance between the connection sites for ligand fixation is commonly in the range 5.3–6.6 Å [40], limiting the availability of adsorption sites for especially smaller cations. Higher ligand grafting of L1 under the applied reaction conditions favored coordination of Ni2+ not only via the ethylene diamine site, but probably also via higher ligand density. The lower ligand density for other ligands may have contributed to better adsorption of REE. This was confirmed by grafting the ligands after acid pre-treatment of SiO2 NPs, which led to denser functionalized NPs in case of L3 and L5. Subsequent adsorption and selectivity experiments showed that the affinity of these ligands shifted towards LTM by achieving higher maximum capacities and molar ratios for Co (in the case of SiO2_L3) and Ni (in the case of SiO2_L5).
Table 3. Molar ratios of Co and Ni against Sm and Nd by EDS analysis.
Desorption tests were performed with 1 M nitric acid in 50 mL Falcon tubes. After adsorption experiments, the samples were centrifuged and 20 mL nitric acid was then added. The tubes were placed on a shaker for 24 h. Afterwards, the nanoparticles were separated by centrifugation (7000× g) and the supernatant was collected, neutralized with ammonia, and titrated with EDTA to determine the desorbed metal amount. The results showed that good desorption rates (85–90%) were achieved with all metal ions. Reusability of these NPs was also tested after three cycles of adsorption and desorption of selected metals (Ni and Sm). Desorption was performed using 1 M nitric acid in 50 mL Falcon tubes, mixing the samples for 24 h on a shaker. Afterwards, the samples were centrifuged (7000× g), and the supernatant collected, neutralized with ammonia to pH = 6.5, and titrated with EDTA to calculate the amount of desorbed metal. After desorption, the samples were placed in 10 mL metal solutions (Co and Sm respectively) with a final metal concentration of 20 mM. All the samples showed good desorption rates in each cycle ranging between 70 and 100%. A small decrease in adsorption rates was noticed after the second desorption cycle, especially for L2 and L4; however L1, L3 and L5 had good adsorption/desorption rates even after three cycles for both metals.

More
© Text is available under the terms and conditions of the Creative Commons Attribution (CC BY) license; additional terms may apply. By using this site, you agree to the Terms and Conditions and Privacy Policy.
Upload a video for this entry
Information
Subjects: Nanoscience & Nanotechnology
Contributors MDPI registered users' name will be linked to their SciProfiles pages. To register with us, please refer to https://encyclopedia.pub/register :
Gulaim A. Seisenbaeva
,
Ani Vardanyan
View Times: 135
Entry Collection: Wastewater Treatment
Revisions: 2 times (View History)
Update Date: 11 Apr 2022
Table of Contents
1000/1000
Hot Most Recent