+1 point
Thank you for your contribution! You can also upload a video entry related to this topic through the link below: https://encyclopedia.pub/user/video_add?id=21032
Check Note
2000/2000
Laxogenin C

Laxogenin C (LGC) is a natural spirostanol deriving from plant hormone which has shown anti-inflammatory, antibacterial, and growth-regulating activities.

Laxogenin C is a class of natural product steroid glycosides, which is derived from laxogenin. It has the same active functional group as the plant hormones brassinosteroids and therefore shares similarities in their physiological activity with brassinosteroids. Its chemical name is laxogenin-3-O-β-D-glucopyranosyl- (1→4)-[α-L-arabinopyranosyl- (1→6) ]-β-D-glucopyranose. Its chemical formula is C44H70O18 and its structure is shown in Figure 1. 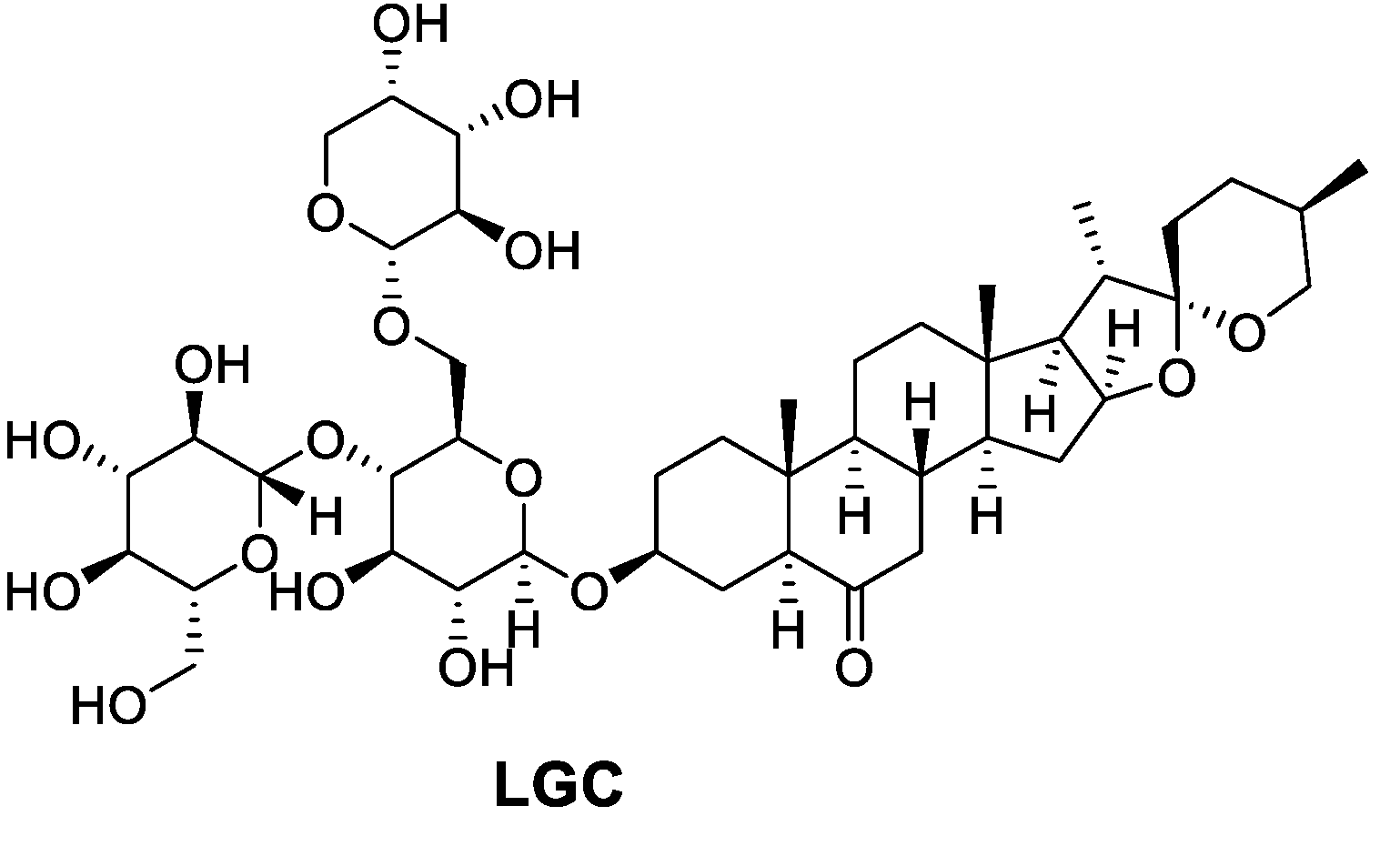 Laxogenin C was first isolated from the rhizomes of Smilax sieboldii by Kubo et al [1]. At the same time, it was also isolated from the rhizomes of Smilax lebrunii by Jia and Ju [2]. It was also isolated from the bulbs of Allium chinense by Jiang et al [3] and the stem of Smilax scobinicaulis by Zhang[4]. Studies have shown that it has some bioactivities on both animals and plants. It has anti-inflammatory activity and antinociceptive effect. It regulates plant growth in a dose-dependent manner, promoting seed germination, seedling growth and increasing crop and fruit yield at low concentrations and inhibiting them at high concentrations. Spraying laxogenin C also alleviates the harm of drought stress on seedlings.

Ma et al.[10] found that moderate concentrations of laxogenin C had the positive effect on seed germination and seedling growth of radish, black bean and etchling. Besides, laxogenin C also increased their overground biological yield and the content of Vitamin C effectively. It showed that the suitable concentration of laxogenin C had a certain application value in the production of sprout vegetable.

The invention of Zhang et al. discloses a patent for a plant growth regulator containing laxogenin and its derivatives that are pollution-free and environmentally friendly. Laxogenin and its derivatives come from medicinal plant resources and belong to the endogenous natural metabolites of plants, which can be absorbed and metabolized easily by plants, so it will not adversely affect the ecological environment or cause human health and safety problems, and is a non-toxic and non-polluting technology that meets the needs of green agriculture, low cost, high stability and wide range of applications.

The activity of brassinosteroids has been widely noted, such as promoting plant growth and enhancing plant resistance to abiotic stresses. More and more studies have proved the great potential of brassinosteroids in agricultural applications. Synthesis of brassinosteroids and their analogues has been started in the United States, Japan, China and other countries, which have been widely used in agricultural production. It was demonstrated that laxogenin C had biological activity on a variety of plants and was widely used in crops, vegetables and fruits. Studies have shown that laxogenin C promoted seed germination and seedling growth, increased biological yield of crops, enhanced photosynthesis, improved crop quality, increased nutrition and improve the taste of fruits and vegetables, and also enhanced plant resistance to abiotic stresses. The study of laxogenin and laxogenin provides a new way to extract analogues with brassinosteroids activity from plants.

More
© Text is available under the terms and conditions of the Creative Commons Attribution (CC BY) license; additional terms may apply. By using this site, you agree to the Terms and Conditions and Privacy Policy.
Upload a video for this entry
Information
Subjects: Allergy
Contributor MDPI registered users' name will be linked to their SciProfiles pages. To register with us, please refer to https://encyclopedia.pub/register :
Qiang Zhang
View Times: 300
Revisions: 3 times (View History)
Update Date: 12 Apr 2022
Table of Contents
1000/1000
Hot Most Recent