Submitted Successfully!
Thank you for your contribution! You can also upload a video entry related to this topic through the link below:
https://encyclopedia.pub/user/video_add?id=1690
Check Note
2000/2000
Wheat genes lost in evolution
Edit
Upload a video
This entry is adapted from 10.3390/ijms21165836

The modern cultivated wheat has passed a long evolution involving origin of wild emmer (WEM), development of cultivated emmer, formation of spelt wheat and finally establishment of modern bread wheat and durum wheat. During this evolutionary process, rapid alterations and sporadic changes in wheat genome took place, due to hybridization, polyploidization, domestication, and mutation. This has resulted in some modifications and a high level of gene loss. As a result, the modern cultivated wheat does not contain all genes of their progenitors. These lost genes are novel for modern wheat improvement.

The evolution of wheat went through a long and multiple processes, including natural hybridization, polyploidization, domestication, and mutation that took place for more than 300,000 years, making it be a distinct model plant for evolutionary study [1][2][3]. At the early stage of evolution, it was difficult for new species to survive as a combination of different genome enveloped within one nucleus and followed by chromosome doubling resulted in severe genetic stress [4][5]. To cope up with stress, they had to face several challenges, such as rapid differentiation of homologous chromosomes for preventing inter-genomic pairing or securing intra-genomic pairing at meiosis and arranging inter-genomic genetic expression for harmonic coexistence [6]. These challenges are meet up through immediate genomic changes, including chromosome re-patterning, chromatin re-modelling, and molecular alteration [7]. Additionally, numerous morphological and physiological changes occurred during domestication which termed as ‘domestication syndrome’, including changes in seed dispersal mode, in plant architecture, increase in kernel size, loss of seed dormancy and change in nutrient content [8]. Even some genes get lost forever during evolution. Natural wheat and related allopolyploids have 2–10% less DNA than the sum of their parents which indicates elimination of DNA during evolution [9][10]. 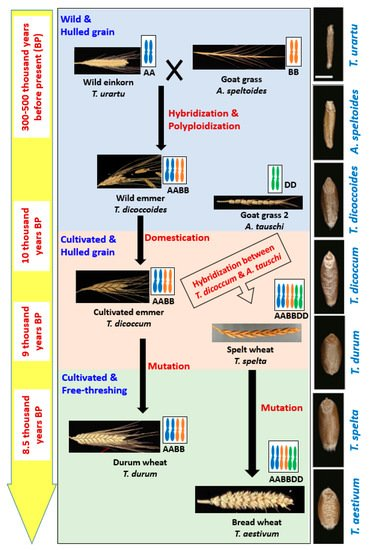 Figure 1. The central flow chart shows the evolution of wheat along with modification in spike size and spike threshability. Left side yellow colored bar indicates the approximate time of those events happened, and right side black colored bar shows the gradual changes in grain size and shape during evolution.

Wild emmer (WEM, T. dicoccoides) was produced through hybridization between wild einkorn and Goat Grass 1 [11][12][13]. Cultivated emmer (T. turgidum spp. Dicoccum) evolved gradually through subconscious selection from WEM by ancient people, particularly by hunter-gatherers in the Fertile Crescent region. Two ideas were found describing domestication of WEM: (a) Domestication was started in the northern region of the fertile crescent and instant spread to the south or vice-versa, (b) domestication occurred in both northern and southern part independently [14]. However, later, some other archaeological evidence strongly suggested independent domestication and cultivation of WEM in multiple sites . Domesticated emmer hybridized spontaneously later with another wild genotype called Goat Grass 2 and produced hexaploid spelt wheat [15][16]. Both cultivated emmer and spelt wheat were characterized with hulled grain. Free-threshing durum and bread wheat were originated from enclosed cultivated emmer and spelt wheat respectively through natural mutation .

According to the history of wheat evolution, only wild einkorn and WEM wheats went through the early domestication selection . T. monococcum (2x) was domesticated from the wild progenitor species T. boeoticum in the Fertile Crescent and has never been involved in the evolution of hexaploid bread wheat or tetraploid durum wheat. The wild diploid T. urartu (AA) was the progenitor of hexaploid wheat and played an essential role in wheat evolution [17].  Substantial genetic erosion occurred through the domestication process of wheat and that erosion was further reinforced during modern breeding processes [18][19][20]. Consequently, loss of diversity, selective sweeps and adaptive diversification have occurred that caused considerable genetic modification [21]. For example, nucleotide diversity at 21 gene loci was analyzed in wild, domesticated, cultivated durum and bread wheats, and revealed that diversity was reduced in cultivated forms during domestication by 69% in bread wheat and 84% in durum wheat [22].

At the very beginning of the domestication process, the major domestication trait was the seed dispersal mode . Certainly plants with reduced spikelet shattering at maturity had been domesticated, which was considered as a key feature in preventing natural yield losses . In addition to the yield, the other major domestication-related traits includes glume tenacity, spike compactness and flowering time (Table 1).

Table 1: Traits and gene transformed due to domestication

During the polyploidization of wheat, rapid alteration and several genomic changes occurred in nature. Such phenomena can be divided into two groups: Revolutionary changes, and evolutionary changes . These changes can be of various types, including the elimination of both low-copy and high-copy DNA sequences, intergenomic disruption of DNA sequences, DNA methylation, deletion of rRNA, gene loss, suppression or activation of gene, chromatin modification and remodeling, heterochromatinization, sub-functionalization, and neo-functionalization [28]. Besides, hybridizations that occurred during the evolution of wheat also resulted in some significant genetic changes. For examples, in the crossing product of Aegilops sharonensis and Aegilops umbellulate, 14% loci from Ae. sharonensis and 0.5% loci from Ae. umbellulate were lost [29].

However, it is evident that evolution results in several genomic changes. For example: Nucleolus organizing regions (NORs) is present on different chromosomes (1A, 5A, 1B, 6B, and 5D) of diploid wheat [30]. Its activity is associated with the size of the intergenic regulatory region and the status of cytosine methylation [31][32]. However, NORs from the A genome are largely lost during the evolution of synthetic tetraploid wheat, due to asymmetric transcription and epigenetic modifications during polyploidization. In hybrids, NORs from both parents were expressed. After chromosome doubling, it became silenced in one parent (A genome), due to increased DNA methylation. In stable synthetic tetraploid wheat, rDNA from only the B genome was present. In the case of bread wheat, the rDNA loci form both A and D genomes were largely eliminated during evolution .

Chromosome-specific sequences (CSSs) occur in only one homologous chromosome pair, i.e., 1A and 1A. These types of sequences were present in all diploid species. However, after polyploidization, CSSs from one genome were eliminated immediately or after some generations. As a consequence, in hexaploid or tetraploid, these sequences occur only in one homologous pair but absent from the homeologous chromosome [33]. Meanwhile, allopolyploidization results in rapid non-random deletion of specific non-coding, low-copy and high-copy DNA [34]. Again, sometimes some genes of the A and B genomes get suppressed upon adding of D genome which is known as intergenomic suppression. This is called intergenomic suppression. For example, the rust resistance gene(s) present in the A or B genome was suppressed by a gene present in the long arm of chromosome 7D [35].

Through the centuries, natural mutation resulted in significant changes in the genomic structures of wheat, which contributed substantially in the genetic evolutionary process of wheat. In general, mutation generated new alleles, while recombination created novel allele combinations. Accumulation of new mutations in older polyploid species, such as WEM, results in increased diversity and more uniform distribution across the genome [36]. For example, Genetic studies revealed that two recessive alleles at two major loci (Br-A1 and Br-B1) controlling non-brittle rachis raised through mutation during domestication [37]. One of the most important genomic changes is the evolution of free-threshing wheat as a result of several major and minor mutation events. A single major gene Q on chromosome 5AL is responsible for free-threshing of modern bread and durum wheat, whereas the recessive q allele is for non-free-threshing wild wheats . A recent study showed that the Q allele arose from q allele through a gain of function mutation [38]. Free-threshabiliy is also related with tenacious glume (Tg) gene, because Tg inhibits the expression of Q gene. QTL correspond to the Tg gene is located on 2D and 2B chromosome. Free-threshing phenotype evolved when mutation transformed Tg into tg. Therefore free-threshing common bread wheat (QQ5Atgtg2Btgtg2D) and free-threshing durum wheat (QQ5Atgtg2B) have mutant alleles at each of the important threshability loci.

More
© Text is available under the terms and conditions of the Creative Commons Attribution (CC BY) license; additional terms may apply. By using this site, you agree to the Terms and Conditions and Privacy Policy.
Upload a video for this entry
Information
Subjects: Plant Sciences
Contributors MDPI registered users' name will be linked to their SciProfiles pages. To register with us, please refer to https://encyclopedia.pub/register :
Wujun Ma
,
Shanjida Rahman
View Times: 609
Revisions: 4 times (View History)
Update Time: 27 Oct 2020
Table of Contents
1000/1000
Hot Most Recent