Submitted Successfully!
Thank you for your contribution! You can also upload a video entry related to this topic through the link below:
https://encyclopedia.pub/user/video_add?id=15804
Check Note
2000/2000
Beavers, Bugs and Chemistry
Edit
This entry is adapted from 10.3390/f12070877

The North American beaver (Castor canadensis Kuhl) and cottonwoods (Populus spp.) are foundation species, the interactions of which define a much larger community and affect a threatened riparian habitat type.

The ecological processes that structure communities are fundamental aspects of ecology and evolution. Holling [1] proposed that “a small set of plant, animal, and abiotic processes structure ecosystems across scales in time and space”. In other words, not all species are equal, and a few are likely to contribute disproportionately to the structure and evolution of communities and ecosystems. Species that are strong interactors, affecting many other species and modifying their environments (e.g., dam building and selective foraging by beavers; shading and cooling of the understory by tree canopies) likely play a major role in structuring communities. Dayton [2] defined a foundation species as “a single species that defines much of the structure of a community by creating locally stable conditions for other species, and by modulating and stabilizing fundamental ecosystem processes”. Ellison et al. [3] reviewed this literature and concluded that dominant species, keystone species, ecosystem engineers and other strong interactors all fall within this category of foundation species. Because all ecosystems of the world likely have multiple and potentially interacting foundation species, it is especially important to identify and understand the interactions of these species as their loss due to global change (including climate change, invasive species, and altered species interactions) could cascade to affect the rest of the community [4]. Keith et al. [5][6] proposed and experimentally tested the interacting foundation species hypothesis and found that the interactions of two foundation species better explained community diversity, stability and species interaction networks than either one alone.
Beavers and cottonwoods are considered foundation species because their presence in an ecosystem has far-reaching effects on community dynamics and ecosystem processes [3]. By felling trees that are used for food and construction activities (e.g., building dams that slow water flow and create ponds and lodges), beavers affect fish populations [7], stream flow and water temperature [8][9], nutrient cycling and availability [9][10][11], individual species and communities of arboreal arthropods [12][13][14], the composition of mixed cottonwood riparian forests and their genetic composition [15], communities of aquatic arthropods [16], vegetation diversity [17], tree architecture [18], and genetic diversity and productivity at the individual tree level [19]. Even in areas where beavers are no longer active but have cut trees and built dams in the recent past, their impact is evident in the structure of the riparian zone and has long-term effects on vegetation types [9][11][20][21][22][23]. Compared with the amount of land they cover, riparian corridors contain disproportionately high biodiversity [24] and are an important resource for birds and mammals. In the arid southwest USA, the narrow riparian “ribbon of green” (Figure 1A) has been shown to support exceptionally high bird [25] and vegetation diversity [26]. However, the extent to which beavers interact with a foundation tree species to affect arthropod diversity in these southwestern stream systems has not been studied (but see [14]). 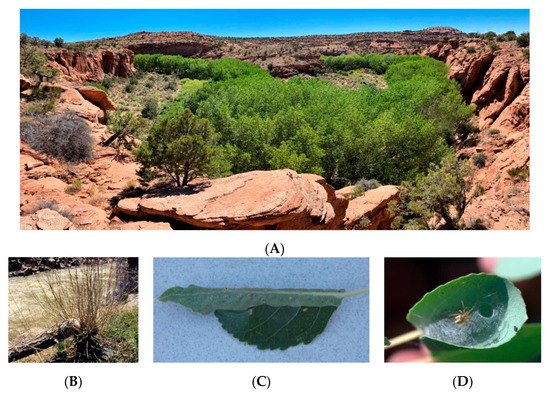 Figure 1. (A) Riparian “ribbon of green” of P. fremontii near Moab, UT; (B) Resprout growth of P. angustifolia after felling by beavers; (C) Leaf rolling moth (Anacampsis niveopulvella Chambers, 1875; an indicator species of resprout growth after P. fremontii felling by beavers); (D) Leaf rolling moth larvae, a member of the arthropod community influenced by beaver herbivory, in the family Tortricidae (also indicator species of resprout growth) create habitat for other arthropods, such as this spider.
One mechanism by which beaver herbivory might affect arthropod diversity is by altering the chemistry of the plants they browse. To determine whether there was a difference in twig chemistry between the juvenile resprout growth of beaver-felled trees (Figure 1B), and the juvenile shoots at the base of unfelled trees, we collected samples from each to assess the concentrations of a suite of chemicals known to be present in these tissues. Since beavers eat the inner bark, or cambium layer of trees [27], we chose to sample twig tissue to quantify how beaver herbivory might affect the phytochemistry of resprouting cottonwoods for future feeding by beavers. While we cannot extrapolate on how twig chemistry may influence foliar arthropods, we were also interested in understanding how herbivory by beavers may differentially affect arthropods on multiple cottonwood species, which has not previously been examined in this system.
To examine how beaver herbivory on Fremont cottonwood (P. fremontii), Eastern cottonwood (P. deltoides) and narrowleaf cottonwood (P. angustifolia) in different southwestern river systems may change twig chemistry and arthropod communities (see representative arthropod species Figure 1C,D), we tested three hypotheses: (1) Beavers show a preference for Fremont cottonwood over three other native species and one invasive woody species common to the area. (2) The resprouted juvenile stems of unfelled trees and trees felled by beavers differ in their levels of nitrogen, carbon, lignin, condensed tannins and the phenolic glycosides salicortin and HCH-salicortin. (3) The arthropod communities in paired samples of juvenile foliage on felled and unfelled trees differ in their multivariate community parameters including metrics such as species richness and abundance.
Testing these hypotheses will increase our knowledge of how the interactions of plant and mammalian foundation species impact a diverse arthropod community. While several studies have examined the impacts of beavers on aquatic arthropods [16] and single arboreal arthropod species [12][13], only one other study that we are aware of examined the impacts of beaver felling of trees on a diverse arboreal arthropod community on narrowleaf cottonwood in another region [14]. Understanding the interactions among ecosystem-defining species (beavers, different species of cottonwoods and other native and exotic trees/shrubs), phytochemistry, and arthropod communities will allow for more holistic approaches to management and conservation in these fragile southwest riparian habitats. 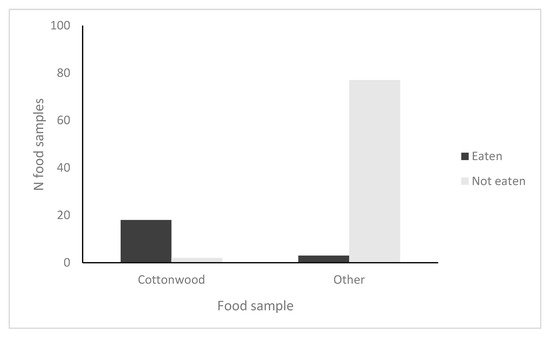 Arizona Sites: Our MRPP/NMDS analyses of Fremont cottonwood trees indicated that total twig chemistry differed between study locations as well as between the juvenile resprout growth of felled and the juvenile growth of unfelled Fremont cottonwoods. For the Arizona study, with 24 pairs of trees, we found significant effects for Site (Dry Beaver Creek, Verde River; A = 0.125; p < 0.0001) and Treatment (Felled, Unfelled; A = 0.016, p = 0.0163; Figure 3A) and a significant Site × Treatment interaction (A = 0.144, p < 0.001). Separate MRPP/NMDS analysis of twig chemistry for each AZ site (Bonferroni-adjusted α = 0.05/2 = 0.025) showed a significant chemical difference between felled and unfelled trees at Dry Beaver Creek (DBC; A = 0.025, p = 0.019), but no significant chemical differences between similar trees at Verde River (VR; A = 0.017, p = 0.063). Samples from resprout growth on felled Fremont cottonwood at Arizona sites showed 14% higher nitrogen concentration than those of the juvenile growth of unfelled trees (p < 0.0001). Our Bonferroni-adjusted pairwise Wilcoxon signed-rank tests for five phytochemicals carbon, nitrogen, lignin, salicortin and HCH-salicortin; adjusted α = 0.05/(5 + 2) = 0.007) showed significant differences between felled and unfelled trees for nitrogen (p = 0.0001), lignin (p = 0.0035), salicortin (p = 0.002) and HCH-salicortin (p = 0.009) at Dry Beaver Creek only. We found no significant differences between felled and unfelled trees for carbon (p = 0.10) or for HCH-salicortin at the Verde River (p = 0.035).

Figure 3. Non-metric multidimensional scaling (NMDS) compared chemistry profiles of juvenile felled and unfelled cottonwood twigs: (A) Fremont cottonwoods in Arizona had significant effects for Site (Dry Beaver Creek, Verde River; A = 0.125; p < 0.0001) and Treatment (Figure shown: Felled, Unfelled; A = 0.016, p = 0.0163) and a significant Site × Treatment interaction (A = 0.144, p < 0.001). (B) In narrowleaf cottonwoods on the San Miguel River, there was also a significant difference between the chemical composition of resprout growth and twigs from unfelled trees (A = 0.123, p < 0.0001); (C) Eastern cottonwoods on the San Miguel River, CO showed no significant difference in chemistry profiles between felled and unfelled trees (A = −0.005, p = 0.59). Icons represent felled and unfelled profiles; centroids are mean values with 95% confidence intervals.

Our study found patterns largely in agreement with our hypotheses that beavers preferentially choose cottonwoods over other tree species, impacting cottonwood twig chemistry and influencing arboreal arthropod communities: (1) When offered a variety of locally occurring woody plant species, beavers preferentially selected Fremont cottonwood six times more often than other available food samples; (2) Twig tissue from resprout growth of felled trees showed different defensive, structural and nutritional phytochemistry concentrations than twig tissue from paired unfelled trees; and (3) Juvenile resprout growth on beaver-felled trees supported significantly different arthropod communities, often with higher species richness, diversity and abundance than the juvenile growth of unfelled cottonwoods. This trio of patterns was repeated in both Fremont and narrowleaf cottonwood stands, arguing that cottonwood stands with heterogeneity resulting from beaver felling support higher arthropod diversity than cottonwood stands without beaver influence. These alterations to the phytochemistry of juvenile resprout growth following beaver felling may impact future herbivory. Strikingly, Eastern cottonwood did not follow these patterns, and we are unaware of studies that have investigated reasons for this different response. Our findings indicate that as interacting foundation species, beavers and cottonwoods can impact the phytochemistry of riparian tree stands as well as the community structure of arthropods on these trees. As riparian habitat becomes ever more imperiled due to climate change, invasive species, and development, our understanding of these interactions and their community-wide impacts are increasingly critical for conservation and management. As we further our understanding of these complex and fragile ecosystems, we can be better prepared to prioritize research and responses that protect and restore functionality for biotic communities and ecosystem processes.