Submitted Successfully!
Thank you for your contribution! You can also upload a video entry related to this topic through the link below:
https://encyclopedia.pub/user/video_add?id=1464
Check Note
2000/2000
Human Remains Detection Dogs
Edit
Upload a video
This entry is adapted from 10.3390/ani10071219

Human remains detection dogs (HRDDs) are powerful police assets to locate a corpse. However, methods used to select and train them are as diverse as the number of countries with such a canine brigade. First, a survey was sent to human remains searching brigades (N Countries = 10; N Brigades = 16; N Handlers = 50; N questions = 9), to collect their working habits. It confirmed the lack of optimized selection and training procedures. Second, a literature review was performed in order to outline the strengths and shortcomings of HRDDs training. A comparison between the scientific knowledge and common practices used by HRDDs brigade was then conducted focusing on HRDDs selection and training procedures. We highlighted that HRDD handlers explained to select their dogs by focusing on behavioral traits while neglecting anatomical features, which have shown their importance. Most HRDD handlers reported to use a reward-based training, which is in accordance with training literature for dogs. Olfactory training aids should be representative of the odor target to allow a dog to reach optimal performances. The survey highlighted the wide diversity of homemade olfactory training aids, and the need to optimize their composition. In the present document, key research topics to improve HRDD works are also provided.

Human remains detection dogs (HRDDs), also called cadaver dogs,  are powerful police assets to locate decaying corpses. They have been already defined by A. Rebmann et al as “canines specially trained to find human decomposition scent and alert their handler to its location” [1]. They are used by law enforcements in many contexts including homicides, as well as natural and manmade disasters to search for human cadavers, body parts, or fluids [1][2][3][4][5][6][7]. Operations during which HRDDS are used are gathered under the term necrosearch[8].

The diversify of the HRDDs' working environments requires dogs with specific skills. Handlers would benefit from identifying morphological, olfactory, and behavioral traits that indicate a dog’s suitability to become a HRDD. However, poor information is available regarding the selection of HRDDs, including those traits and their procedures as the scientific literature mainly focuses on the selection of service dogs [20][21].

The training of detection dogs relies on the quality of the available olfactory training aids[22]. HRDDs should be trained with aids that mimic the smell of any human cadaver. However, characterization of the volatile organic compounds released by human corpses are scarce as they are complicated to carry out [23]. Some training aids are available on the market but were shown to be unrepresentative of the smell of a real decaying corpse, which seems logical as regard to the lack of information thereabout[24]. Numerous biotic (e.g., tissues nature, animal species, necrophagous insects, microorganisms) and abiotic factors (e.g., humidity, temperature, death location) affect the volatilome of a cadaver [25][26][27][28][29].  As a result, the volatile chemical cues released during the decomposition process differ greatly from one case to another [4][25][27][29][30], making it difficult to provide HRDDs’ handlers with olfactory training aids mimicking human decomposition.

Selection - Based on a survey sent to 50 handlers from 16 brigades affiliated to Kynopol, no standardized procedures to select dogs within a litter were highlighted. All teams (except one) declared to implement homemade selection tests to assess the learning abilities of puppies during preliminary training sessions, taking into account some specific traits (e.g., drive, independence). In most cases, the selection is based on the handler’s own opinion during training or playing time only, without collecting any quantitative measures (“gut” feeling). The survey highlighted that handlers usually select puppies within the same breed (Figure 1) but none of them declared to select their dogs based on olfactory traits and they were almost entirely unaware of any morphological traits. However, the scientific literature mentioned some morphological, olfactory and behavioral traits as very important to take into account during the selection of future HRDDs. Regarding morphological traits, handlers should select agile dogs to move easily in rough fields with a steady stamina for long-lasting performances[1][31]. In addition, the body size and the fur length should be taken into account as they were shown to be directly linked to the dogs thermoregulation[19][32][33][34]. Regarding olfactory traits, it was demonstrated that the dog's head conformation was directly linked to its olfaction efficiency[35][36]. Finally, the behavioral traits that were highlighted by previous researches to be important are a high dog drives to ease the training and [18][37][38] (handlers declared to look for this trait too) and a high nerve strength to allow the dog to deal with stressful situations[18][37]. No selection procedures were found in the literature and even if several selection procedures might be applied to HRDDs, different works require different skills. We therefore strongly recommend to develop specific HRDDs' selection procedure based on abovementioned traits. 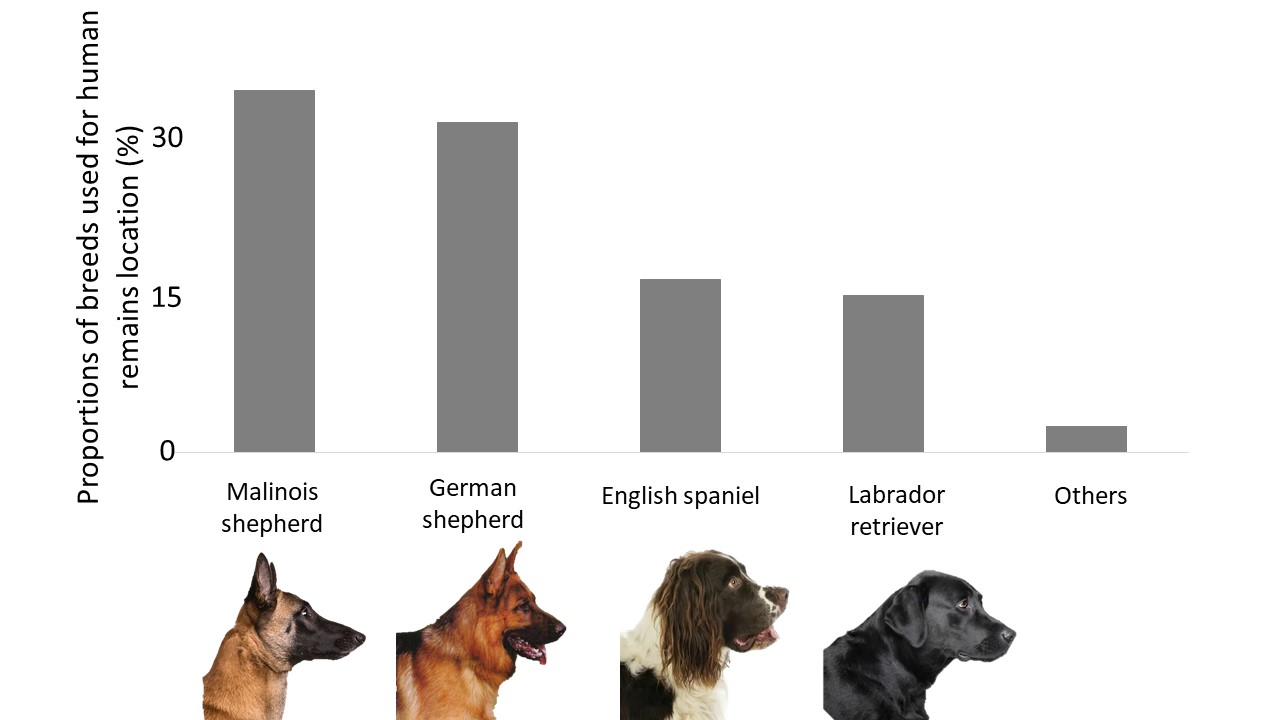 Figure 1. Proportion of breeds currently used as human remains detection dogs based on a survey completed by ten brigades from Europe and Canada.

Training - During their training sessions, most surveyed handlers declared using reinforcement rather than punishment (Figure 2). A minority of them, however, still mentioned the practice of punishments (Figure 2). Among handlers practicing positive reinforcement, no generalization can be made. They reported to use either toys, clicker, food, or encouragement as positive stimuli. Most of them use a combination of those rewards. Handlers did not explain how their training sessions are organized. No information was provided about the procedure to end a training session. 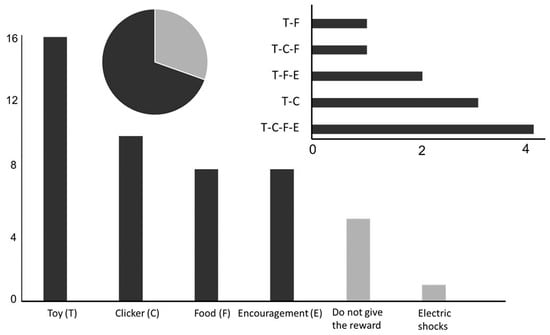 Stimuli, also called aids, used during the specialized olfactory training were very different among surveyed teams (Figure 3). The latter reported to only use homemade biological aids (mainly of human origin or swine origin). Commercial olfactory aids available are not used by surveyed handlers. 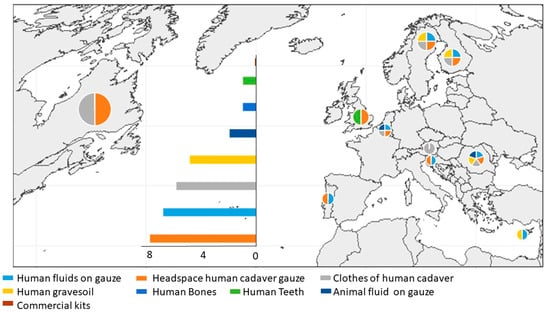 Training — Documented HRDDs’ training methods were scarce. When available, they focused on case studies[11] and none of them were associated with an evaluation of the dog's performances and behavioral outcomes. Training methods were based on operant conditioning during which a dog learns that its response to a command has consequences. The dog will repeat the behavioral response to the specific stimulus that provides the higher benefit [39][40]. A positive reinforcement strategy allowed the establishment of a strong dog-handler relationship, while negative reinforcement was associated with distraction and lower obedience [39]. Despite these observations, the type of reinforcement remains a matter of debate among surveyed handlers: it is still unclear whether aversive and reward-based methods led to different levels of performance in working dogs [41]. Training methods used to reinforce HRDDs are important. However, the the end-of-training procedure was seen to be at least as important as the training procedure itself. In a recent publication [42], the Federal Bureau of Investigation (FBI) raised the importance of End of Session Cues (EoSC). EoSC is a (series of) stimulus that informs the dog about the coming end of the training session. EoSC must be clearly and repeatedly introduced at the end of each training session to avoid the dog to associate events that follow the training session (e.g., return in the cage) as part of the training. If EoSC is not applied, some dog's behavioral responses might unintentionally be reinforced. For instance, going back to the crate immediately after a training session could be considered by the dog as a punishment, resulting in a decrease in its performances. Instead a training session should end in a positive way, for example by a playing period[42][43]. There is a wide diversity of olfactory materials to train HRDDs, including biological and synthetic aids [23]. As far as the authors know, no publication comparing the efficiency of various olfactory training aids on dogs’ performances is available. However, based on chemical analyses, scientists seem to agree that the biological olfactory aids are the most efficient and reliable ones to train HRDDs [4][44], but difficult to obtain due to ethics, legislation, and biohazard risk for both human and dogs [5][23]. Commercial aids, also called synthetics aids, were identified as unrepresentative and unreliable, because they do not contain compounds that have been previously reported within the headspace of human decaying bodies [23].

Our survey revealed that handlers mostly use human origin aids which is in accordance with the scientific recommendations. However, they also meet biohazard and ethical problems. Those who use a human surrogate model to train their dogs have to face to the potential differences existing between these models and human corpses. None of the handlers mentioned the use of commercial aids. In our opinion, developing a reliable synthetic aid is a promising perspective that would ease the training efforts of HRDD brigades. It requires a fine characterization of human post-mortem volatilome, and the identification of its key components, common to any decomposing corpse [24].

In addition to the recommendations made above, we suggest some perspectives of research and suggestions to the HRDD brigades.

First, there is a lack of validated methods regarding the selection of HRDDs puppies. We suggest to validate the existing methods of selection and to develop a new selection method based on anatomical, olfactory, and behavioral traits. As surveyed handlers declared not to record quantifiable data during the selection, this new method should include measurable data to avoid subjectivity and to select the most promising individuals. So far, no biomarkers indicating a potential good detection dog are available. One should therefore investigate the possibility to use, during the dog selection, biomarkers associated with high dog’s performances. To validate methods or potential biomarkers, it is important to develop a protocol for measuring dog performances.

Regarding training procedures, one should compare the impact of conditioning methods (including clicker training) and the type of olfactory aids on HRDDs’ performances. The impact of the composition of a HRDD training aid (biological or synthetic) on the dog performance has never been evaluated. In our opinion, the development of a synthetic aid mimicking the human cadaver volatilome is likely one of the most promising perspectives, as this would provide handlers with a training tool that is reliable, ethical, easy to obtain and to use.

More
© Text is available under the terms and conditions of the Creative Commons Attribution (CC BY) license; additional terms may apply. By using this site, you agree to the Terms and Conditions and Privacy Policy.
Upload a video for this entry
Information
Subjects: Zoology ; Others
Contributors MDPI registered users' name will be linked to their SciProfiles pages. To register with us, please refer to https://encyclopedia.pub/register :
Clément Martin
,
Claire Diederich
,
François Verheggen
View Times: 718
Revisions: 3 times (View History)
Update Time: 26 Oct 2020
Table of Contents
1000/1000
Hot Most Recent