Submitted Successfully!
Thank you for your contribution! You can also upload a video entry related to this topic through the link below:
https://encyclopedia.pub/user/video_add?id=14577
Check Note
2000/2000
Antiviral Drugs against COVID-19
Edit
Upload a video
This entry is adapted from 10.3390/biologics1020016

Several FDA-approved available antiviral drugs, alone or in combination, have been screened clinically for their extended use since the early phase of the current pandemic to find a safe and effective treatment option against COVID-19, and many clinical trials of these antiviral drugs are still ongoing. However, an in-depth understanding is required from current clinical literature reports to execute integrated approaches between computational and experimental methods to guarantee high success rates of repositioned drugs. Moreover, multiple challenges associated with repurposed drugs have been identified, including dose adjustments, route of administration, acute/chronic toxicity, appropriate delivery systems, etc..

The outbreak of coronavirus disease 2019 (COVID-19) has created a lot of burden on the global medical system, public health, and economic and social life of human beings [1][2]. The causative pathogen identified for COVID-19 is called severe acute respiratory syndrome coronavirus 2 (SARS-CoV-2), which emerged from viruses of unknown sources [3][4]. SARS-CoV-2 is a type of ß-coronavirus (β-CoV) that belongs to the coronavirus group. The human coronavirus group causes several outbreaks, including the severe acute respiratory syndrome (SARS-CoV) epidemic from 2002 to 2004 and the Middle East respiratory syndrome (MERS-CoV) outbreak in the Middle East, Africa, and South Asia, and many more countries during 2012 [5][6]. Wuhan, China, was the first city for the occurrence of COVID-19, and after that, it spread all over the world, infecting around 218 million people together with over 4.5 million total deaths, according to the COVID-19 global case dashboard of the World Health Organization (WHO), by 29 August 2021 [7]. Based on the data from January 2020, the WHO declared COVID-19 a Public Health Emergency of International Concern (PHEIC), which was followed by a pandemic on 11 March 2020 [8].
To date, no effective and approved antiviral treatment is available to fight against COVID-19. However, some recommendations are being practiced concurrently to manage individual patients’ needs, such as antipyretic drugs for fever, oxygen therapy for respiratory distresses, antimicrobial therapy with mechanical ventilation applied in some severe cases depending on the clinical condition of the patient, and so on [9][10]. Meanwhile, the drug repurposing strategy is being continuously used in COVID-19 treatment. Drug repurposing or drug repositioning is tactically a rapid process to identify new pharmacological indications rather than the original purpose of investigational, existing, already marketed or FDA-approved drugs for the treatment of diseases. This advantageous method provides a great benefit in circumventing some de novo drug design and development stages. Thus, the technique decreases scheduled periods of drug development, reduces failure risk, and protects funds from being wasted [11]. In addition, it is crucial for a drug to be effective, proportionally related to clinical efficacy, or to produce desired pharmacological activities for a specified indication in humans. A potential drug must be passed through efficacy trials to fulfill the principal requirements of clinical efficacy, including several human trial phases [12]. In other words, efficacy trials determine the possibility of an intervention to produce expected results under ideal circumstances or the degree of beneficial effects under real-world clinical settings [13][14].
More importantly, SARS-CoV-2 is the seventh member of the genus β-coronavirus and the Coronavirdiae family [15]. Genome sequencing of SARS-CoV-2 demonstrated that the virus is almost 79% and 50% identical with the previous two SARS-CoV and MERS coronaviruses, respectively [16]. So, it might be very convenient and rational to repurpose the currently available antiviral drugs used against the two previous viral pandemics (SARS and MERS CoV) or have evidence of previous experience. Furthermore, it has been perceived that drug repurposing has already become a “universal strategy” to face the challenges of the COVID-19 pandemic because of several advantages it offers. These include fewer clinical trial steps, the availability of the formulation and distribution of the existing pharmaceutical supply, the possibility of more effective treatment of known combination therapy, the discovery of novel mechanisms of actions of old drugs or new classes of medicines, [17] and the elimination of “activation barriers” in the early stages of research, thus ensuring the rapid advancement of any project to disease-oriented research [18].
Several FDA-approved available antiviral drugs, alone or in combination, have been screened clinically for their extended use since the early phase of the current pandemic to find a safe and effective treatment option against COVID-19 [19][20], and many clinical trials of these antiviral drugs are still ongoing. However, an in-depth understanding is required from current clinical literature reports to execute integrated approaches between computational and experimental methods to guarantee high success rates of repositioned drugs. Moreover, multiple challenges associated with repurposed drugs have been identified, including dose adjustments, route of administration, acute/chronic toxicity, appropriate delivery systems, etc. [21][22]. Although many preliminary studies exhibited promising results, several extensive clinical investigations reported contradictory findings with significant adverse effects of these elongated applications of antiviral drugs. However, numerous clinical trials conducted with larger samples/patients have recently disclosed many mixed results, which needs careful study. Therefore, it is essential to review comprehensively the uses of repurposed drugs focusing on the therapeutic strategies, advantages, adverse drug reactions, and respective delivery approaches for instigating an instrumental battle against COVID-19. Likewise, it is also necessary to know the clear disease pathology and critical strategies to identify new drugs capable of protecting against highly contagious viral infections, including the SARS-CoV-2 infection [23]. This article summarizes the current understanding of clinical efficacy and the adverse drug reaction of various antiviral drugs used for SARS-CoV-2-infected patients across the world. Here, we also illustrated Figure 1 to represent the chemical structures of the seven repurposed antivirals drugs for use against COVID-19. 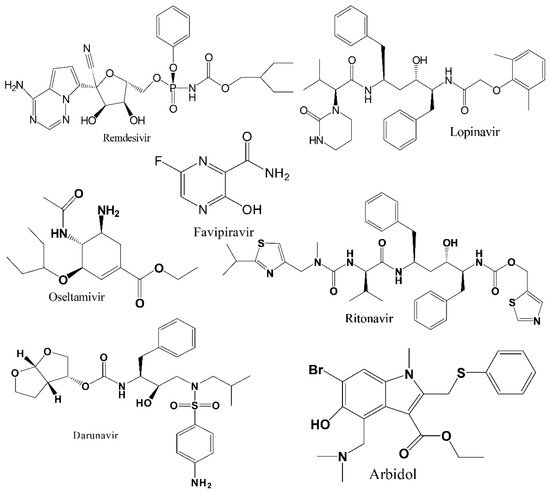 Figure 1. Chemical structures of the selected most promising antiviral drugs against COVID-19.