Submitted Successfully!
Thank you for your contribution! You can also upload a video entry related to this topic through the link below:
https://encyclopedia.pub/user/video_add?id=1195
Check Note
2000/2000
Epigenetics and pancreatic cancer progression
Edit
Upload a video

Due to the lack of diagnostic biomarkers and high resistance to treatment, pancreatic ductal adenocarcinoma (PDAC) represents one of the most lethal solid tumors with poor survival. Moreover, the metastatic potential of PDAC is extremely high and tumors spread mainly through lymphatic and blood vessels. Although genetic modifications are well defined in PDAC, the role of epigenetics regulations, which secure dynamic response to environmental stimuli, has only recently been recognized. Epigenomic studies revealed that epigenetic changes in oncogenes and tumor suppressor genes were associated with epithelial-mesenchymal transition (EMT) which is responsible for the invasive phenotype of cancer cells and therefore, their metastatic potential.

Pancreatic ductal adenocarcinoma (PDAC) arises in the exocrine glands of the pancreas, although some acinar cells are highly flexible and can experience acinar to ductal metaplasia under stress conditions, and accounts for 95% of all pancreatic cancers. Since PDAC is characterized by rapid tumor progression, most of the patients already have metastasis in the liver and lymph nodes at the time of diagnosis [1]. According to epidemiological data, less than 20% of cases survive one year and the five-year survival rate remains around 5–7% [2]. Despite intensive research, surgical resection of the pancreas with microscopically free margins (R0 resection) remains the only realistic and potentially curative option. Unfortunately, rapid disease progression and early metastasis are responsible for the late diagnosis and less than 20% of patients have a resectable tumor at the time of diagnosis [3].

The extensive research in genetics and genome-wide expression patterns indicates that genetic changes are critical for PDAC initiation and early progression. However, epigenomic studies revealed that epigenetic alterations in oncogenes and tumor suppressor genes affected tumor progression and were associated with survival [4]. Epigenetic changes are heritable modifications of DNA or chromatin structures, which influence gene expression without altering the DNA sequence [5]. Epigenomics of PDAC studies the epigenetic changes across multiple genes or the entire genome. DNA methylation, post-translational modifications of histone proteins, and non-coding RNAs are the main epigenetic mechanisms that can influence gene expression. They have been confirmed as important contributors to PDAC development and progression [6][7][8]. 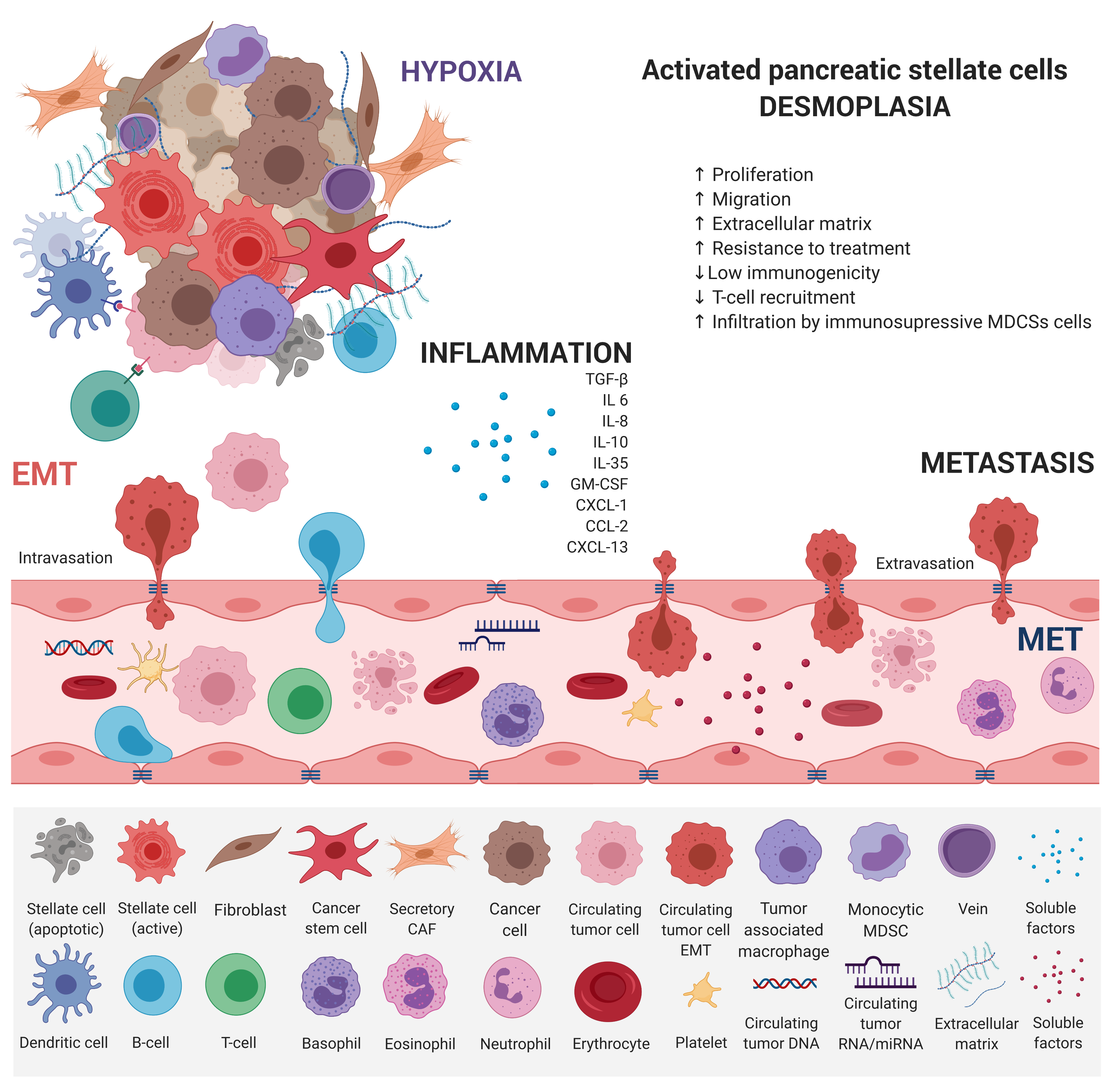 Figure 2. Main factors that influence PDAC progression. PDAC consists of a minority of malignant cells within a microenvironment composed of an extracellular matrix (ECM) and a plethora of hematopoietic cells. Pancreatic stellate cells activated from the quiescent state by intrinsic and extrinsic stimuli (e.g., mechanical injury or chronic inflammation) play a key role. Once activated, they secrete an abundant amount of ECM proteins composed of hyaluronan, laminin, fibronectin, and collagens. By secreting ECM proteins, cytokines, and chemokines, they actively recruit monocytes and CD4 regulatory T cells (Tregs). Hematopoietic cells are predominantly of the myeloid lineage, with both granulocytic and monocytic myeloid-derived suppressor cells (MDSCs), as well as tumor-associated macrophages (TAMs). All contribute to local immunosuppression. KRAS mutation is an early oncogenic event that drives the recruitment of B cells early in the development of PDAC, which can exert immunosuppressive effects. Therefore, T cells, both CD4+ and CD8+, are not primed against PDAC antigens and are not excluded from tumors. The paucity of blood vessels leads to high levels of hypoxia in the interior of the tumor. Paracrine interactions between inflammatory cells and hypoxia stimuli induce EMT, which promotes circulating tumor cell (CTC) formation and endows differentiated normal and cancer cells with stem cell properties. They are characterized by a high expression of drug efflux pumps including multi-drug resistance genes, protecting them from chemotherapeutic reagents thus increasing their metastatic potential.

EMT represents a dedifferentiation process that is associated with a loss of functional epithelial cell markers, such as E-cadherin, and increased expression of mesenchymal markers [11]. Stem cell-associated marker expression of CD24+, CD44+, and CD133+ cells was found to correlate with EMT in PDAC [12]. TGF-b, TNF-a, as well as Notch, Hedgehog, and Wnt molecular pathways have been shown to induce EMT by the upregulation of Snail, Twist, and Zeb1 transcription factors, which destroy the tight junctions and degrades adhesion molecules [13][14][15][16][17][18][19]. Reversibility of EMT-related changes via epigenetic regulation allows the tumor cell to respond to various external and internal stimuli. Decreased expression of the CDH1 gene, which encodes the glycoprotein E-cadherin, is considered the hallmark of EMT, characterized by the dedifferentiation of epithelial cells and a loss of intercellular junctions[20]. Loss of E-cadherin-mediated cell-cell adhesion was associated with higher tumor invasiveness and increased metastatic potential [21]. This occurs in 42–60% of PDAC tumors and shows a strong correlation with metastasis to remote organs. However, the mechanism of CDH1 downregulation in most tumors is unknown. In fact, a decreased expression of the CDH1 gene is rarely induced by mutation or loss of heterozygosity. According to the published data, hypermethylation of the gene promoter region and interaction with the EMT-inducing transcription factors Slug, Snail, and Twist1 may explain the decreased CDH1 gene expression [22][23]. Moreover, von Burstin et al. demonstrated the downregulation of E-cadherin in metastatic PDAC cells mediated by a repressor complex, containing Snail and HDACs. The Snail protein binds directly to the CDH1 promoter, resulting in the inhibition of CDH1 expression, and Snail mRNA overexpression has been shown to correlate with the metastatic potential of cells [24]. These results were in accordance with previous findings showing an association between EMT and HDAC-mediated transcription control [25]. Several miRNAs were also identified as modulators of EMT, mainly the members of the miR-200 family and miR-205 [26], and their participation in PDAC tumors was also confirmed [27]. The role of epigenetic factors in EMT during malignant progression in PDAC was also confirmed by the epigenetic silencing of FOXA1/2 transcriptions factors, which were determined to be effective antagonists of EMT by promoter hypermethylation [28].

The success of PDAC treatment will be determined by the integration of genomic, epigenomic, and transcriptomic data into a biomarker-driven approach. Progress in early disease detection and reliable monitoring, together with a better understanding of EMT-associated epigenetic changes and the possibilities of their modulation will, hopefully soon, help to improve the outcome of patients with this devastating disease.

Acknowledgments: This research was funded by the Scientific Grant Agency of the Ministry of Education, Science, Research and Sport of the Slovak Republic and Slovak Academy of Sciences VEGA, project number 2/0052/18 and by European Union´s Horizon 2020 grant agreement No 857381, project VISION (Strategies to strengthen scientific excellence and innovation capacity for early diagnosis of gastrointestinal cancers).

More
©Text is available under the terms and conditions of the Creative Commons-Attribution ShareAlike (CC BY-SA) license; additional terms may apply. By using this site, you agree to the Terms and Conditions and Privacy Policy.
Upload a video for this entry
Information
Subjects: Oncology
Contributors MDPI registered users' name will be linked to their SciProfiles pages. To register with us, please refer to https://encyclopedia.pub/register :
Sona Ciernikova
,
Božena Smolková
View Times: 214
Revisions: 3 times (View History)
Update Time: 18 Jan 2021
Table of Contents
1000/1000
Hot Most Recent