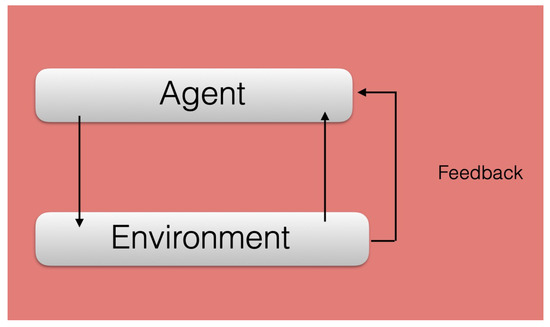 Figure 1. Reinforcement learning protocol. A system, called agent, interacts with its external world, the environment, carrying out some action on it, while receiving information from it. Afterwards, the agent acts accordingly in order to achieve some long-term goal, via feedback with rewards, iterating the process several times.

In Ref. [10], a pioneer proposal for reinforcement learning using quantum systems was put forward. This employed a Grover-like search algorithm, which could provide a quadratic speedup in the learning process as compared to classical computers [10].

Refs. [10][11][12] have speedups with respect to classical algorithms. While the first two rely on a polynomial gain due to a Grover-like algorithm, the latter achieves its proven speedup via a quantum oracular environment.

The series of articles in Refs. [13][14][15][16][17][18] study quantum reinforcement learning protocols with basic quantum systems coupled to small quantum environments. These works focus mainly on proposals for implementations [13][14][15][17] as well as experimental realizations in quantum photonics [16] and superconducting circuits [18]. In the theoretical proposals, small few-qubit quantum systems are proposed both for quantum agents and quantum environments. In Ref. [13], the aim of the agent is to achieve a final state which cannot be distinguished from the environment state, even if the latter has to be modified, as it is a single-copy protocol. In order to achieve this goal, measurements are allowed, as well as classical feedback inside the coherence time. Ref. [14] extends the previous protocol to the case in which measurements are not considered, but instead further ancillary qubits coupled via entangling gates to agent and environment are employed, and later on disregarded. In Ref. [15], several identical copies of the environment state are considered, such that the agent, via trial and error, or, equivalently, a balance between exploration and exploitation, iteratively approaches the environment state. This proposal was carried out in a quantum photonics experiment [16] as well as with superconducting circuits [18]. In Ref. [17], a further extension of Ref. [15] to operator estimation, instead of state estimation, was proposed and analyzed.

Ref. [16] obtained a speedup as well with respect to standard quantum tomography, in the scenario with a reduced amount of resources, in the sense of reduced number of measurements.

Finally, Ref. [20] considered different paradigms of learning inside a reinforcement learning framework, which included projective simulation [42] and a possible implementation with quantum photonics devices. The latter, with high-repetition rates, high-bandwith and low crosstalks, as well as the possibility to propagate to long distances, makes this quantum platform an attractive one for this kind of protocol.