Adsorption of Pesticides onto Clay Minerals

Adsorption of pesticides onto natural clay mineral relies on the use of adsorbents with minimal treatment beyond their preparation to provide a narrow size distribution and homoionic form by exchanging the naturally occurring interlamellar cations (in the case of smectites) by some alkaline (Na+ or K+) or alkaline earth (Ca2+or Mg2+) cation. Additional modifications include organophilization, intercalation with metal polycations and pillaring.  The adsorption capacity and strength of pesticides onto homoionic, organophilic and intercalated/pillared clay minerals depend on the chemical nature of the pesticide, surface area, and pore volume. Electrostatic interactions, hydrogen and coordinative bonds, surface complexations, and hydrophobic associations are the main interactions between pesticides and clay minerals.

The so-called Green Revolution dramatically increased agricultural productivity from the middle of the twentieth century to the present [1]. However, this increase relied heavily on chemical fertilizers and a wide range of pesticides, especially herbicides. Consequently, herbicides’ contamination of soils, groundwater, and surface water is a concern of prime importance due to the severe effects of these compounds on humans, animals, and the ecosystem’s equilibrium [2][3][4][5][6].

Adsorption is among the most efficient technologies to prevent or remediate pollution from pesticides because it relies on low-cost materials such as biomaterials, aluminum, and iron oxides, or oxyhydroxides, zeolites, and clay minerals. Clay minerals exhibit properties such as high superficial area, high adsorption capacity, low cost, and ready availability that are valuable to the development of herbicide formulations with controlled releasing of active components [7][8], cleanup of contaminated soils, groundwater protection [9], and water treatment [10][11][12].

Clay minerals have gained interest because they are abundant in nature and are environmentally compatible. Montmorillonite (Mt), like other smectites, and vermiculite (Vt), have permanent negative charges generated by the isomorphic substitutions of Si 4+ by Al 3+ in the tetrahedral sheets and of Al 3+ by Mg 2 + in the octahedrons. Cations such as Na + , Ca 2+ , and Mg 2+ in the interlayer keep the electroneutrality. These permanent negative charges interact with cationic herbicides such as paraquat and diquat [13]. Additionally, these interlayer cations are easily exchangeable, for instance, with organic quaternary ammonium salts to produce hydrophobic organoclays suitable for retaining neutral pesticides [14]. Aluminum, Fe 3+ , Cr 3 + , Ti 4+ , Zr 3+ exchange with the interlayer cations and form polynuclear cationic species under hydrolysis, increasing the affinity towards anionic species [15][16]. Alternatively, the suspension of polycations can be first prepared and then exchanged with the interlayer cation [2]. The exchange of the interlayer cation by a polynuclear hydroxyl metal cation is a modification process named intercalating. Calcinating the intercalated clay minerals produces oxide pillars between the layers, increasing the basal spacing d(001), the specific surface area, and the microporosity, enhancing their adsorption capacity and affinity towards a wide variety of organic molecules, including the pesticides [2][17][18][19].

Excellent reviews recently addressed the interactions between organic compounds and clay minerals, aiming to develop controlled released herbicide formulation and water purification [7][9][20]. A straightforward comparison of adsorbent efficiencies towards various compounds is possible only if parameters such a mass to volume ratio, kinetic, adsorption isotherms, and thermodynamic constants derived from adsorption experiments are presented.

Cation exchange, for instance, is the primary retention mechanism for cationic pesticides such as paraquat, diquat, and difenzoquat on natural and modified clays [13][21][22][23][24][25]. For instance, adsorption isotherms of terbutryn (basic), dicamba (anionic), and paraquat on natural and modified clays from Morocco revealed that the natural clay efficiently adsorbed paraquat from aqueous solutions ( Table 1 ).

Exchange of the inorganic interlayer cations by cationic or zwitterionic surfactants keep apart the aluminosilicate layers, resulting in increased basal spacing and hydrophobicity, thus enhancing the affinity toward neutral organic compounds with poor water solubility or high KOW values [14][32]. Examples of organic cations appear in Figure 1, and some relevant applications to removing pesticides from aqueous media are highlighted in Table 2. Since log KOW is pH-dependent, proper pH control and reporting are mandatory in adsorption studies, especially for interpreting the adsorption behavior of ionizable pesticides. In their neutral forms, the magnitude of adsorption constants correlates with the KOW. For instance, in organophilic kaolinite and bentonite, the distribution coefficient (Kd) values increased in the order atrazine (log KOW = 2.61) < alachlor (log KOW = 3.52) < trifluralin (log KOW = 5.34) [33]. The size of the alkyl chain of organic cation and the amount incorporated into the clay gallery strongly affect the adsorbent’s hydrophobicity, enabling a fine-tuning in the treatment of the mineral phase to attend to the application needs. 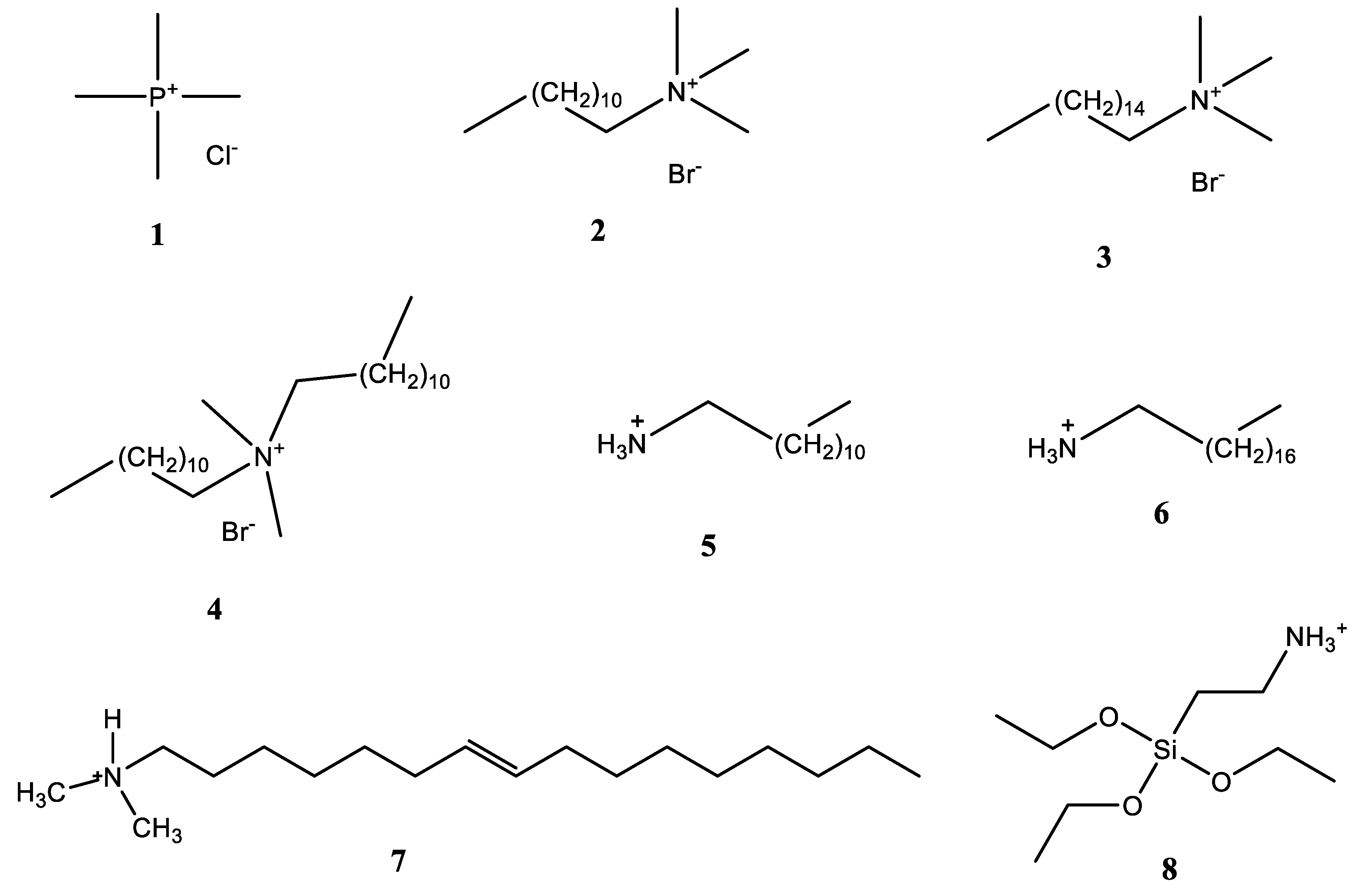 Intercalating and pillaring clay minerals consist of exchanging the interlayer cation (K+, Na+, Ca2+) by a polynuclear hydroxyl metal cation (intercalating), followed by thermal treatment to obtain a series of oxide pillars between the layers of the clay mineral structure. Relevant applications and the results of using intercalated or pillared clay minerals to remove pesticides from aqueous media appear in Table 3. There have been papers on the pillarization principles since 1955 [39], and the first reports on the preparation of pillared clays date between the 1970s and 1980s, based on the use of aluminum polycations for intercalation of smectites, producing pillared materials with high basal spacing and thermal stability up to 500 °C [40]. Thermal treatments convert the polycations into oxides, preventing structural collapse [41]. Compared with the raw clay mineral, the pillars provide the acidic sites in the interlayer surfaces and a more porous structure, besides an increase in the surface area and changes in the charge properties, affording diverse adsorption mechanisms of organic compounds [41][42][43]. The treatment consists of the exchange of the interlayer alkaline or alkaline earth cations [2][44] by the most common Al-Keggin ions (Al13), represented as [AlO4Al12(OH)24(H2O)12]7+ [40][44] or [Al13O4(OH)24(H2O)12]7+ [45]. Parameters such as the [OH]:[Al3+] ratio, the [Al3+] to clay mineral proportion and the aging temperature have a marked influence on the materials’ stability and efficiency [46]. Not only Al3+ has been employed in the pillarization, but also other cations, such as Fe3+ [2][17][43][45][47][48][49][50][51], Ti4+ [47][52][53], Zr4+ [44][54], Co2+, Ni2+ and Cu2+ [55], and Cu2+ [56]. These works describe the preparation, characterization, and applications for the adsorption or degradation of different organic compounds since they can support catalysts for photodegradation. Excellent reviews addressed the theory and the preparation procedures [39][46] as well as the removal of organic pollutants from wastewater [39]. The intercalation and pillarization processes produced adsorbent materials for different organic pollutants [2][41][44][56][57][58][59][60] and catalysts or photocatalysts for pollutants degradation/mineralization [40][43][45][53][61]. Among the main applications, the use as adsorbents for pesticides, aiming for water treatment or the preparation of controlled release formulations, deserve highlighting.
Table 3. Sorbent characterizations and sorption features of pesticides and metabolites onto intercalated or pillared clay minerals.
3-CA: 3-chloroaniline, 3-CP: 3-chlorophenol, DCPMU: 3-(3,4-Dichlorophenyl)-1-methylurea, DCPU: 1-(3,4-Dichlorophenyl) urea DCA: 2,4-Dichloroaniline. All other abbreviations according to the footnote/title of Table 2, Table 3.

The use of raw or modified clay minerals for elaborating sorbents to environmental cleanup and reducing pesticide spills’ impacts continues to increase. Additionally to the impressive availability of image and analytical techniques for materials characterization and understanding the interaction mechanisms, the design of adsorbents and adsorption-based treatments still relies on kinetic and equilibrium experiments. This review proposed some guidelines for the adsorption experiments and commented on some of the published results. In summary, the analytical technique to measure the free concentrations must be selective and sensitive, having a wide linear dynamic range to enable reliable measurements under low and high degrees of site occupation. The adsorbent mass to solution ratio and the sensitivity of the analytical technique are parameters to consider aiming to obtain reliable measurements of free concentrations in a wide range of site occupations. Kinetic measurements should precede the construction of adsorption isotherms and thermodynamic experiments since both of them require measurements under equilibrium conditions. The availability of software packages favors the fitting of kinetic and adsorption isotherms by nonlinear regression analysis, thus minimizing the errors inherent to the linearization.
In many cases, the comparison of adsorption constants and capacities does not consider the standard deviations of these parameters, thus making the comparison subjective and without statistical support. Finally, the experimental conditions should emulate as much as possible those found in the environment. Thus, the influence of ionic strength, pH, temperature, and natural organic matter, among others, on the adsorption parameters should be evaluated for each new clay mineral-based adsorbent proposed.