Curcumin as a Potential Neuroprotective Agent

Parkinson’s disease (PD) is a slowly progressive multisystem disorder affecting dopaminergic neurons of the substantia nigra pars compacta (SNpc), which is characterized by a decrease of dopamine (DA) in their striatal terminals. A crucial unmet demand in the management of Parkinson’s disease is the discovery of new approaches that could slow down, stop, or reverse the process of neurodegeneration. Novel potential treatments involving natural substances with neuroprotective activities are being developed. Curcumin is a polyphenolic compound isolated from the rhizomes of Curcuma longa (turmeric), and is considered a promising therapeutic and nutraceutical agent for the treatment of PD. However, molecular and cellular mechanisms that mediate the pharmacological actions of curcumin remain largely unknown. Stimulation of nicotinic receptors and, more precisely, selective α7 nicotinic acetylcholine receptors (α7-nAChR), have been found to play a major modulatory role in the immune system via the “cholinergic anti-inflammatory pathway”. Recently, α7-nAChR has been proposed to be a potential therapeutic approach in PD. In this review, the detailed mechanisms of the neuroprotective activities of curcumin as a potential therapeutic agent to help Parkinson’s patients are being discussed and elaborated on in detail.

1. Curcumin as a Potential Neuroprotective Agent

Curcumin was named after Vogel and Pelletier, the first to isolate a “yellow coloring-material” from the rhizomes of Curcuma longa in (turmeric) 1815. Later, in 1842, they discovered that turmeric is a complex mixture of ingredients and were successful in isolating pure curcumin oil. In 1910, Milobedeska and Lampe characterized its structure as diferuloylmethane, or 1,6-heptadiene-3,5-dione-1,7-bis (4-hydroxy-3-methoxyphenyl) (Figure 1), and three years later they synthesized curcumin [1].

Figure 1. The source, crude form, and chemical structure of curcumin. (A) The botanic source of turmeric. (B) Crystallized powder of curcumin. (C) The enol and keto forms of curcumin.

2. Chemical and Physical Properties of Curcumin

3. Pharmacokinetics and Pharmacodynamics of Curcumin

Human studies of curcumin’s pharmacokinetics yielded results that were similar to those obtained from animal studies. Because of its poor absorption, curcumin has a low bioavailability in plasma and tissues, rapid hepatic metabolism, as well as rapid systemic elimination through the gut with a peak human plasma level of 0.41–1.75 µmol/L after the oral administration of 4–8 g of curcumin [5][6]. Many studies have shown that curcumin is primarily metabolized in the liver, where it undergoes extensive reduction via alcohol dehydrogenase, followed by glucuronate and sulfate conjugation [7][6]. Furthermore, Perkins and colleagues reported that humans require a daily dose of 1.6 g curcumin to achieve the desired results [8].
Almost all studies have confirmed that unformulated curcumin has low bioavailability in both animals and humans [9][10]. Various formulations have been developed to improve curcumin bioavailability. Nano curcumin, for example, was developed to improve curcumin solubility in an aqueous solution. Cheng et al. generated a nanoparticle form of curcumin that resulted in a higher plasma concentration and a six-fold higher AUC with a longer mean residence time in mice brains. [11]. Polylactic-co-glycolic acid (PLGA) and liposomal-formulated curcumins improved water solubility of the compound [12][13][14]. In regards to curcumin permeability, cyclodextrin (CD) encapsulated curcumin improved curcumin permeability compared to unformulated curcumin [15]. Concomitant administration of piperine with curcumin significantly reduced elimination and half-life clearance of curcumin [9][10]. Alginate–curcumin nanoparticles (Alg-NP-Cur) [16], glyceryl mono-oleate nanoparticles loaded with piperine and curcumin (GMO-NP-Pip/Cur) [17], curcumin-loaded lactoferrin nanoparticles (Lf-NP-Cur) [18], and curcumin-loaded polysorbate 80-modified cerasome (CPC) nanoparticles (NPs) [19], are different preparations developed to maximize curcumin bioavailability.

Curcumin, a multi-targeted compound, has traditionally been used as a dietary spice and a medicinal herb in Asian countries for a variety of pathologies due to its anti-inflammatory properties [20], and antioxidant properties [21][22]. Moreover, curcumin possesses antibacterial [23], antiviral [24], antifungal [25], anti-arthritic [26], hepatoprotective [27], anti-thrombotic [28], cardio-protective [29], hypoglycemic [30], anti-allergic [31][32], wound-healing [33], and chemo-preventive and anticancer properties [34][35][36]. Curcumin’s anti-inflammatory and antioxidant effects, among others, form the basis of curcumin’s critical neuroprotective effects in a variety of neurological diseases affecting both the central and peripheral nervous systems. Several molecular targets of curcumin have been identified based on extensive evidence from in vitro and in vivo studies.

5. Molecular and Cellular Neuroprotective Mechanisms of Curcumin in PD

The present review focuses on recent advances and the mechanisms underlying the wide range of biological effects of curcumin against neurodegenerative diseases, specifically Parkinson’s disease. Curcumin’s ability to modulate the functions of multiple signal transduction pathways has been linked to a reduction in disease progression. Curcumin interacts with transcription factors such as z transcription (STAT) proteins [37], growth factors and their receptors, e.g, epidermal growth factor receptors and HER2 [38][39], cytokines, e.g., interleukin 1b (IL-1b), interleukin 6 (IL-6) [40], enzymes, e.g., hemox (HO-1) [41], and genes that regulate cell proliferation and apoptosis [42]. The ability of curcumin to modulate and interact with multiple cell signaling pathways and proteins strongly indicates that this polyphenol is an effective multi-targeted compound [43][44][45]. This conclusion is in line with several recently published reports identifying curcumin as a potent epigenetic regulator [46][47]. Interestingly, curcumin’s inhibitory effect on MOA-B enzyme [48], which would lead to an increase in the level and availability of DA in the brain, has gained much attention in recent years, as discussed below.
A critical unmet need in the management of PD is the discovery of new approaches that could slow, stop, or ideally reverse, the process of neurodegeneration. Curcumin’s neuroprotective potential has been demonstrated in several recent studies using various animal models of Parkinson’s disease [49][50][51][52][53][54][55][56]. For instance, Zbarsky described the protective effects of curcumin on the number of TH-positive neurons as well as on striatal DA level and its metabolites; dihydroxyphenylacetic acid (DOPAC) and homovanilic acid (HVA) against 6-hydroxydopmine (6-OHDA) induced neurodegeneration in animal models of PD [57]. The advantage of curcumin over other derivatives, such as demethoxycurcumin (DMC) and bisdemethoxycurcumin (BDMC), was reported on DA receptor (D2) binding activities and on the number of TH +ve neurons [58]. Yang et al. described the protective effects of curcumin on the injured hippocampus in an 6-OHDA model of PD, including a significant improvement in mental status, weight gain, neurobehaviors, learning and memory, levels of dopamine and norepinephrine, neural regeneration in hippocampal tissue, and cell survival-related signaling pathways such as BDNF, TrkB, and PI3K [59]. Moreover, brain-derived neurotrophic factor (BDNF), a member of the neurotrophin growth factor family, which is involved in various neurological functions, is affected in PD [60]. Curcumin restores neuronal regeneration by stimulating Trk/PI3K signaling cellular cascade, reducing levels of tumor necrosis factor-α (TNF-α) and caspase activity, hence increasing levels of BDNF in 6-OHDA model of PD [59][61]. Recently, we investigated the neuroprotective effects of curcumin in a 6-OHDA animal model of PD [56]. The results indicated that curcumin enhances the survival of striatal TH fibers and SNpc neurons, decreases abnormal turning behavior, and exerts neuroprotective properties at least partly via an α7- nAChR-mediated mechanism. These findings provide evidence that α7-nAChRs could be a potential therapeutic target and curcumin would be the first natural agent which is reported to modulate nicotinic receptors in PD.
Curcumin is an excellent scavenger for most ROS in a concentration or dose-dependent manner [62]. Remarkably, curcumin inhibits oligomerization of α-synuclein, protein aggregation, and consequently neural toxicity [63][64][65], and produces potential inhibitory effects on astrocytic activation as well as NADPH oxidase system [63]. Regenerating the oxidative status of curcumin could be achieved by a chain-breaking or a hydrogen donor antioxidant such as vitamin E or ascorbic acid (Figure 3).

Figure 3. Suggested sites of exchange of phenol OH-group in curcumin structure with free radical oxidants, and its regeneration by a hydrogen donor antioxidant.

Curcumin’s pharmacological actions are thought to be mediated by a variety of ligand-gated ion channels and receptors [66]. The recent study on the effects of the natural polyphenol compound provides evidence that curcumin possesses a potent neuroprotective effect as it preserves the integrity of the nigrostriatal dopaminergic system. This is distinctly manifested in the improved motor behavioral performance in the curcumin-treated animals through a α7-nAChRs-mediated mechanism [56]. This study adds to previous in vitro studies that show that curcumin enhances the effects of acetylcholine (ACh) through the function of α7-nAChRs in a concentration-dependent manner [67]. In addition, the results from another in vitro study highlight the significant role of curcumin in modulating the fluxes of calcium (Ca2+) ions via α7-nAChRs [68]. Based on the previous findings that curcumin acts as a type II PAM of α7-nAChRs and a potentiator of receptor function by significantly decreasing desensitization [67], it is reasonable to conclude that curcumin’s PAM action on α7-nAChRs has a beneficial effect in mediating neuroprotective effects [69][70]. Curcumin’s time-tested safety, neuroprotective efficacy, and preliminary clinical success of agents targeting nicotinic receptors in PD make it an appealing natural candidate for further investigation and development in the search for PD therapeutics.
Our in vitro, in silico, and in vivo findings suggest that increasing Ca2+ influx may have a neuroprotective mechanism in neuronal and non-neuronal cells via various intracellular mechanisms, as shown in Figure 4 [56][67][68]. Stimulation of presynaptic α7-nAChR stimulates vesicular DA release via a Ca2+-dependent facilitation mechanism [71][72][73]. Extracellular signal-regulated mitogen-activated protein kinase (ERK/MAPK) activation can be triggered by protein kinase A (PKA) and/or calcium-calmodulin-dependent protein kinase (CaMK) [74]. A rise in intracellular Ca2+ levels is considered as a trigger factor of both signaling cascades. Activation of (ERK/MAPK) is a crucial signaling event in the cell survival pathway via upregulation of the cellular transcription factor; cAMP response element-binding (CREB), increasing gene expression of tyrosine hydroxylase and enhancing DA release [75][76]. α7-nAChR is also expressed on microglia and astrocytes and plays a major role in immune response via the “cholinergic anti-inflammatory pathway”. Activation of α7-nAChR results in an increase in intracellular Ca2+ concentration, and consequently modulates Janus kinase 2 (JAK2) and/or signal transducer and activator of transcription 3 (STAT3), ending up with an upregulation of protein kinase B (PKB), leading to inhibition of nuclear factor-kB (NFκB) [77]. The lipid signaling cascade that is started by protein kinase C (PKC), via phosphorylation of phosphatidylinositol 3-kinase (PI3K/Akt), is accredited with modulating the activities of neuroprotective and apoptotic factors, such as Bcl-2 and caspases, respectively [78][79][80]. Recent data demonstrate that the regulation of neuroinflammatory reactions by curcumin occurs through the modulation of the microglial JAK/STAT signaling pathway [81]. Collectively, all or some of these factors result in decreased apoptosis, enhance neuronal survival, modify immune responsiveness, and produce alteration in synaptic plasticity [82]. 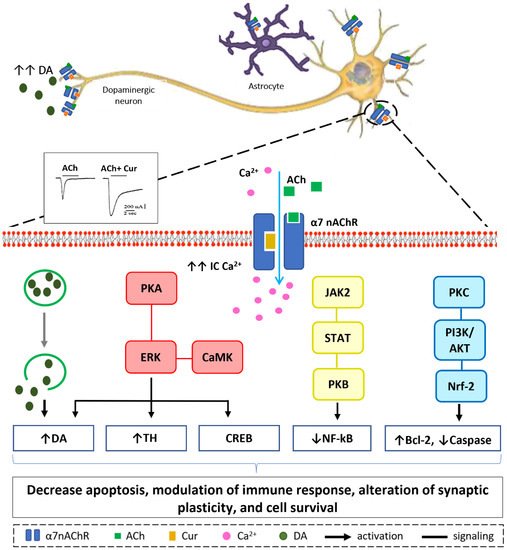