Seed Geometry in the Vitaceae

The Vitaceae Juss., in the basal lineages of Rosids, contains sixteen genera and 950 species, mainly of tropical lianas. The family has been divided in five tribes: Ampelopsideae, Cisseae, Cayratieae, Parthenocisseae and Viteae. Seed shape is variable in this family and is described based on the comparison of bi-dimensional seed images with geometric models. Ten morphological types are described in the Vitaceae. Seven of them are general and three specific. Among the general types, three are shared with the Arecaceae and correspond to geometric figures well described (lenses, superellipses and elongated waterdrops). Four additional groups include waterdrops, normal or rounded, heart curves, normal or rounded, elongated heart curves and other elongated curves, respectively. Finally, the three specific types correspond to heart curves of the Cayratia and Pseudocayratia types, heart curves of the Squared Heart Curve (SqHC) type of Ampelocissus and Ampelopsis, and Elongated Superellipse-Heart Curves (ESHCs), frequent in Tetrastigma species and observed also in Cissus species and R. rhomboidea. All these groups are defined by geometric models obtained by the representation of algebraic equations. Modifications in the equations result in models adjusting to the shape of seeds for each species.

The Vitaceae Juss. contains sixteen genera with ca. 950 species of lianas primarily distributed in the tropics with some genera in the temperate regions. The Leeaceae Dumort., with a single genus of 34 species, mostly shrubs and small trees rather than lianas, included in the family in the APG IV [1], was later recognized as a separate family [2][3]. Both families constitute the order Vitales, one of the basal lineages of Rosids, whose closest relative remains controversial [4][5].
The Vitaceae has been divided in five tribes [3] (Table 1): (I) Ampelopsideae J. Wen and Z. L. Nie (Ampelopsis Michx., Nekemias Raf., Rhoicissus Planch., Clematicissus Planch.); (II) Cisseae Rchb. (Cissus L.); (III) Cayratieae J.Wen and L.M.Lu (Cayratia Juss. Ex Guill, Causonis Raf., Acareosperma Gagnep., Afrocayratia, Cyphostemma (Planch.) Alston, Pseudocayratia J.Wen, L.M.Lu and Z.D.Chen, Tetrastigma Planch.); (IV) Parthenocisseae J.Wen and Z.D.Chen (Parthenocissus Planch.) and (V) Viteae Dumort (Ampelocissus Planch., and Vitis L.). Cayratia and Cyphostemma were included in Cissus by Linné and Planchon considered the former as a section of Cissus [6][7].
Table 1. A summary of the taxonomy of the Vitaceae. The approximate number of species in each tribe and genus is given between parentheses. Data adapted from [3].

Cissus is the largest genus in the family with 300 species of complex classification [8]. Cyphostemma is second, with 200 species of an interesting diversity in their range of distribution as well as in growth habits (vines and lianas, herbs, stem succulents and a tree) [9]. Vitis has seventy-five inter-fertile wild species distributed in three continents under subtropical, Mediterranean and continental-temperate climatic conditions. Vitis vinifera L. is the species with highest economic importance in the family with some taxonomic uncertainty about the differentiation between V. vinifera L. subsp. vinifera and V. vinifera L. subsp. sylvestris (Willd.) Hegi [10][11]. Thousands of cultivars of V. vinifera are used worldwide in Viticulture. Species of other genera are widely cultivated, such as Parthenocissus quinquefolia (L.) Planch., the Virginia creeper, in temperate areas, and Cissus incisa Des Moul., the grape ivy, in tropical areas. Species of the genus Tetrastigma are the only host plants for the parasitic plant Rafflesia arnoldii R.Br., Rafflesiaceae, which is native only to a few areas within the Malay Archipelago [12].

2. Seed Morphology in the Vitaceae

The silhouettes of bi-dimensional images of seeds often resemble geometric figures that can be used as models for the description and quantification of seed shape in plant families. A recent review of the geometry of seeds in the Arecaceae described a series of models useful for the analysis of seed shape in this family [13]. Geometric models included the ellipses (the circle is a particular type of ellipse), ovals, lemniscates, superellipses, cardioid and derivatives, lenses and the water drop curve [13]. The reader is referred to this review for the algebraic description of the models and their application in the morphometry of seeds in the Arecaceae. The application of geometric models in morphometry is based on the comparison of bi-dimensional images of well oriented seeds with these figures by means of image programs working in two layers (Adobe Photoshop, Corel Photo Paint…). The two images (seed and model) can be superimposed searching for a maximum similarity and the ratio between shared and total surface areas, that we have termed J index, is calculated with the data obtained in ImageJ [14]. J index measures the percent of similarity between two images (the seed and the model) and provides information on overall seed shape [15][16]. Bidimensional seed images of many plant species adjust well to one of three morphological types: the ellipse, the oval and the cardioid [17]. The seeds of the model plant Arabidopsis thaliana (L.) Heynh., those of the model legumes Lotus japonicus (Regel) K.Larsen and Medicago truncatula Gaertn., as well as the seeds of Capparis spinosa L., in the Capparaceae and Rhus tripartita DC. in the Anacardiaceae adjust well to cardioids or modified cardioids [18][19][20][21][22]. The seeds of Ricinus communis L. and Jatropha curcas L. in the Euphorbiaceae and those of cultivars of Triticum sp. in the Poaceae adjust well to ellipses of varied x/y ratio [23][24][25]. Oval shaped seeds occur frequently in the Cucurbitaceae, Berberidaceae, Eupteleaceae and Lardizabalaceae [26][27], while the cardioid is more common in Papaveraceae [27]. A given geometric type is sometimes associated with other morphological or ecological characteristics. For example, cardioid-type seeds were observed to be more frequent in small-sized seeds, while elliptic shape is more frequent in larger seeds [17]. In the Malvaceae, cardioid type seeds are associated with small herbs of annual cycle [28].

2.2. Seed Morphology in the Vitaceae

Seed shape in the Vitaceae is variable and seeds resembling geometric figures are frequent in this family. The seeds of Ampelocissus are pyriform, oval, or round in dorsal or ventral view [29]. The seeds of Cissus species are often described as globose with a pointed base, elliptic in outline or oblong (see, for example, [30][31][32]). These adjectives and other like sub-globose or terete are also applied to seed descriptions in other genera suggesting two important points: (1) The seeds of the Vitaceae are suitable for the comparison with geometric figures used as models. (2) The comparison may be quantitative, yielding measures that contribute to taxonomy. Table 2 contains a list of 131 species in the Vitaceae whose seeds have been observed for this work.
Table 2. A summary of the 131 species for which seed shape has been analysed in this work.
Table 3 contains a summary of groups based on morphological seed types for the analysed species .

Table 3. A summary of groups based on morphological seed types for the analysed species in the Vitaceae. The number of cases found in each group is given between dashes. 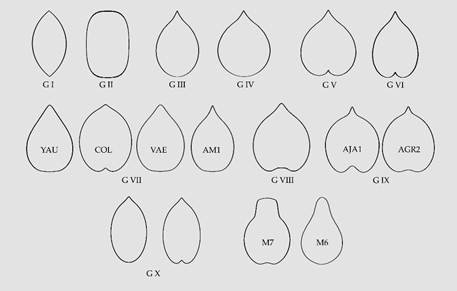 In general, the distribution of morphological types is not in close agreement with the current taxonomic classification; nevertheless, some results may be summarized in this aspect. First, the seeds of the Elongated Superellipse-Heart Curves (ESHCs) type (Group X) are more frequent in Tetrastigma and have been observed in Rhoicissus and Cissus, but not in species of other genera. While many seeds in species of Ampelopsis, Parthenocissus and Vitis share the typical shapes of water drop and heart curves, the squared heart curve (SqHC) type (Group IX) has been predominantly observed in Ampelocissus and Ampelopsis. A number of species remain undefined due to one of these two reasons: First, their irregular seed shape making difficult the identification of an adequate model (Cayratia geniculata, Cissus antarctica) and, second, the seed images have geometric shapes but the identification of the model with the corresponding equation is pending (Tetrastigma delavayi, T. rumicispermum). In addition, further work will be done on the seeds of Vitis species.