Seed Morphology in the Arecaceae

Fruit and seed shape are important characteristics in taxonomy providing information on ecological, nutritional, and developmental aspects, but their application requires quantification.

Fruit and seed shape are important characteristics in taxonomy providing information on ecological, nutritional, and developmental aspects, but their application requires quantification. The shapes of many seeds in the Arecaceae are often described as circular, ellipsoidal or elliptic, globose, ovoid, ovoidal, piriform, or rounded, including double adjectives such as "irregularly globose" or "broadly ovoid" [1].

In this article [2] we have described the shape of seeds in the Arecaceae based on the comparison with a series of geometric models.

Shape is the tridimensional result of complex developmental processes, but the description of it is based on particular aspects. Bi-dimensional images of seeds are often similar to geometric figures that can be used as models. To find a model, the images of different seeds must be taken from a similar perspective to avoid differences in orientation and maximize similarity. The overall shape of the seed (elongated, thinner, or thicker in a different position) and anatomical points (hilium, germination pore, ventral groove) can be references for orientation. Slight changes in orientation can give different images (Figure 1).

Figure 1. Seeds of Phoenix dactilifera L. in three views: dorsal (D), lateral (L), ventral (V). A groove is visible in the ventral side, opposed to the germination pore in a dorsal position. Bar equals 1 cm.

Geometric models can be defined that adjust to the shapes observed making it possible to give accurate morphological descriptions of seed shape for a number of species, as well as the quantification of shape by comparison between the seed image and the model. The possibility of a model depends on the uniformity of seed shape in samples of a given species. Only when the shape is relatively constant, it is possible to describe it by means of a geometric model. Difficulties may arise from developmental aspects.

2. Geometric Models: Definition of the Models

This section describes the geometric figures that are models in the description of seeds in the Arecaceae. Most of the descriptions are accompanied by a formula; these algebraic formulae correspond to the equation in Cartesian coordinates of the curve that delimits the figure (notice that in almost all cases the same name is used for the curve and the figure). The first groups belong to elementary geometry, while the latter groups include a set of figures constructed as graphical representations of algebraic equations. In general, we use the traditional terminology, but a particular case deserves attention. An oval is a convex figure limited by a C2 closed curve. Convex means that any pair of its points are joined by a segment contained in the figure. The C2 property or continuous second degree of smoothness ensures the continuity of the curvature, in particular, the absence of "peaks". In this sense, many common geometric figures are ovals (circles, ellipses…). On the other hand, the word "oval" derives from the similarity with an egg shape (ovus in Latin), and this invites to its utilization in a restrictive sense, that will be used in this work, excluding, e.g., circles and ellipses.

The circle [3], the figure delimited by a circumference, is defined, according to Euclid (Book 1 Definition 15):
"A circle is a plane figure bounded by one curved line, and such that all straight lines drawn from a certain point within it to the bounding line, are equal. The bounding line is called its circumference and the point, it's center."
A circumference (centered at the origin) of radius r is represented by the expression:

The ellipse [4] is "a curve surrounding two focal points, such that for all points on the curve, the sum of the two distances to the focal points is a constant". An ellipse (centered at the origin) is represented by the formula:

where a,b > 0 represent the semi-major and semi-minor axis, respectively. The circumference is a particular ellipse in which the two focal points coincide; in this case, a = b = r.

In our restricted sense, an oval is a curve resembling the silhouette of an egg. Unlike ellipses, ovals have only a symmetry axis [5]. Ovals can vary depending on their construction as well as on their degree of symmetry, going from figures close to ellipses to others with a remarked single symmetry. The family of ovals used in this work have the equation

A lemniscate (of Bernoulli) [6] is the locus of points whose product of distances from two fixed points (called foci) equals a constant. A lemniscate is given by the equation

where a is a real constant. By simple algebra, the equation for a half lemniscate is obtained as

Superellipses [7] can be seen as intermediate curves between an ellipse and its circumscribed rectangle. They are determined by the equation:

with p > 2. In particular, for a = b squared circles are obtained.

The cardioid [8] has the Cartesian equation:

A lens [14] is a convex region formed as the intersection of two circular disks (when one disk does not completely enclose the other). If the two circles that determine a lens have an equal radius, it is called a symmetric lens, otherwise, it is an asymmetric lens. The Vesica piscis ("fish bladder") is a special type of symmetric lens formed with circles whose centers are offset by a distance equal to the circle radii [15]. The 3D solid obtained rotating a lens around the axis through its tips is called a lemon.

In the description of seed shape, it may be useful to modify geometric figures to obtain better adaptations to the bidimensional shape of seeds. For example, we obtained a figure resembling a water drop adapting the basis in the heart curve [16] to a circumference overlapping the maximum width of the curve. It can be seen as the joint graphical representation of the functions:

Derived from this combination (Model 4 in [17]), an elongated waterdrop can be obtained modifying the aspect ratio of the figure.

3. Geometric Models: Examples in the Arecaceae

Table 1. Geometric models with some representative examples of seeds for each morphological type.

Round seeds project circular images from any perspective. However, ellipsoidal and ovoidal seeds can also give circular images that are useful for species identification and classification. For an accurate description, the seed orientation has to be given and, in any case, values of J index need to be obtained in a representative number of samples. Figure 2 shows representative examples of circular seeds: Acoelorrhaphe wrightii (Corypheae, Coryphoideae), Acrocomia aculeata (Cocoseae, Arecoideae), Coccothrinax argentata (Cryosophileae, Coryphoideae), Geonoma congesta (Geonomateae, Arecoideae), Iriartea deltoideia (Iriarteeae, Arecoideae), and Thrinax radiata (Cryosophileae, Coryphoideae). Other examples are also found in diverse sub-families and tribes. 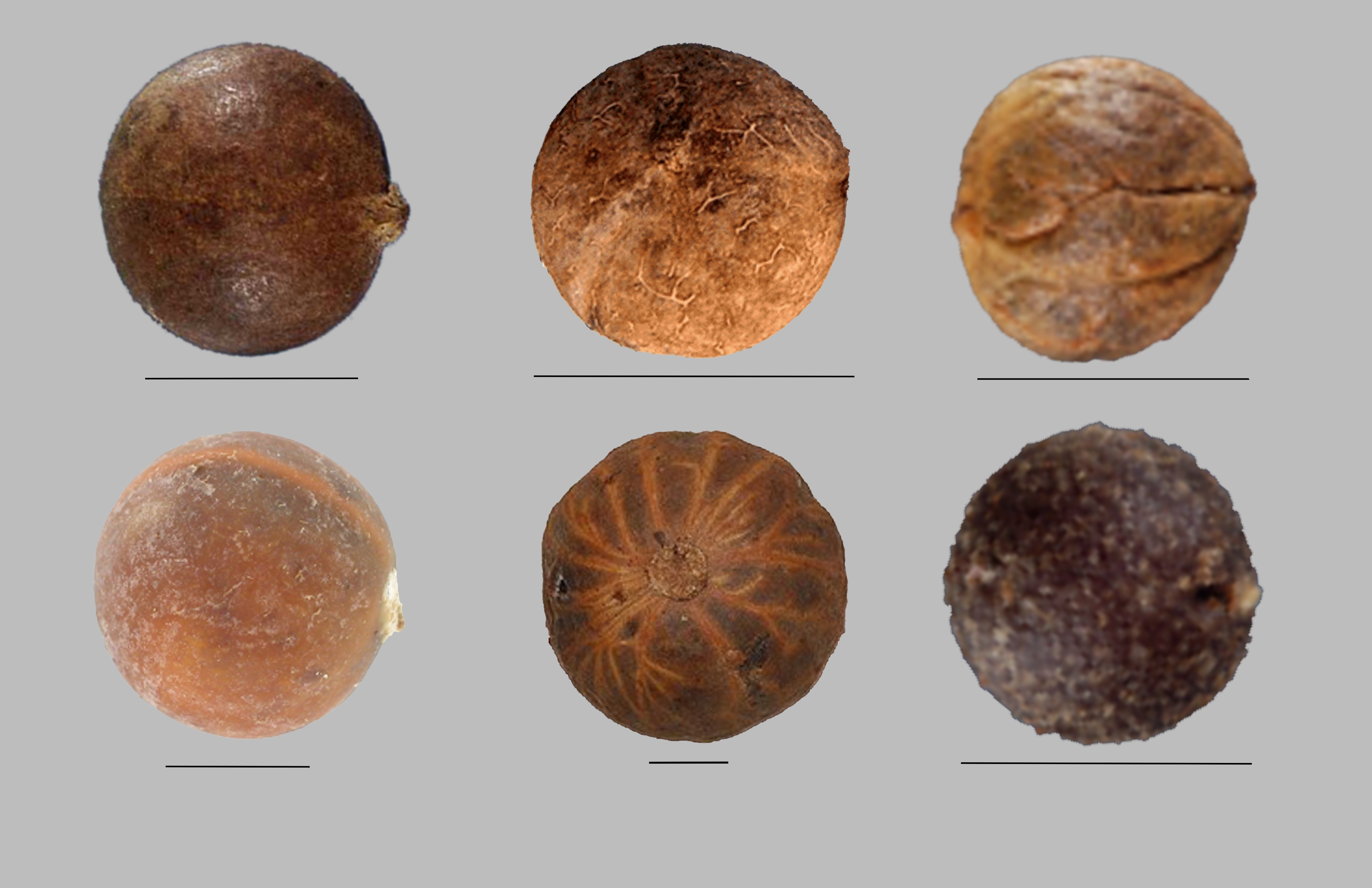 Figure 2. Representative examples of round seeds (J index values are indicated between parentheses). From left to right: Acoelorrhaphe wrightii (93.6), Acrocomia aculeata (95.7), Coccothrinax argentata (92.6), Geonoma congesta (96.1), Iriartea deltoideia (95.3), and Thrinax radiata (95.4). The seed of Iriartea deltoidea is oriented with the attachment of the peduncle in a frontal position. In the other seeds, the place of attachment of the peduncle is in a lateral position. Bars represent 0.5 cm.

Ellipsoidal seeds give bi-dimensional images that vary from circular to elliptical, depending on the selected point of view. The elliptical shape is determined by the ratio between the major and minor axes (aspect ratio). Figure 3 shows representative examples of seeds whose images adjust well to ellipses of different values. These are Iriartella sp. and Socratea exorrhiza (Iriarteae, Arecoideae), Adonidia merrillii (Areceae, Arecoideae), and Washingtonia filifera (Corypheae, Coryphoideae). Other examples are also found in diverse sub-families and tribes. 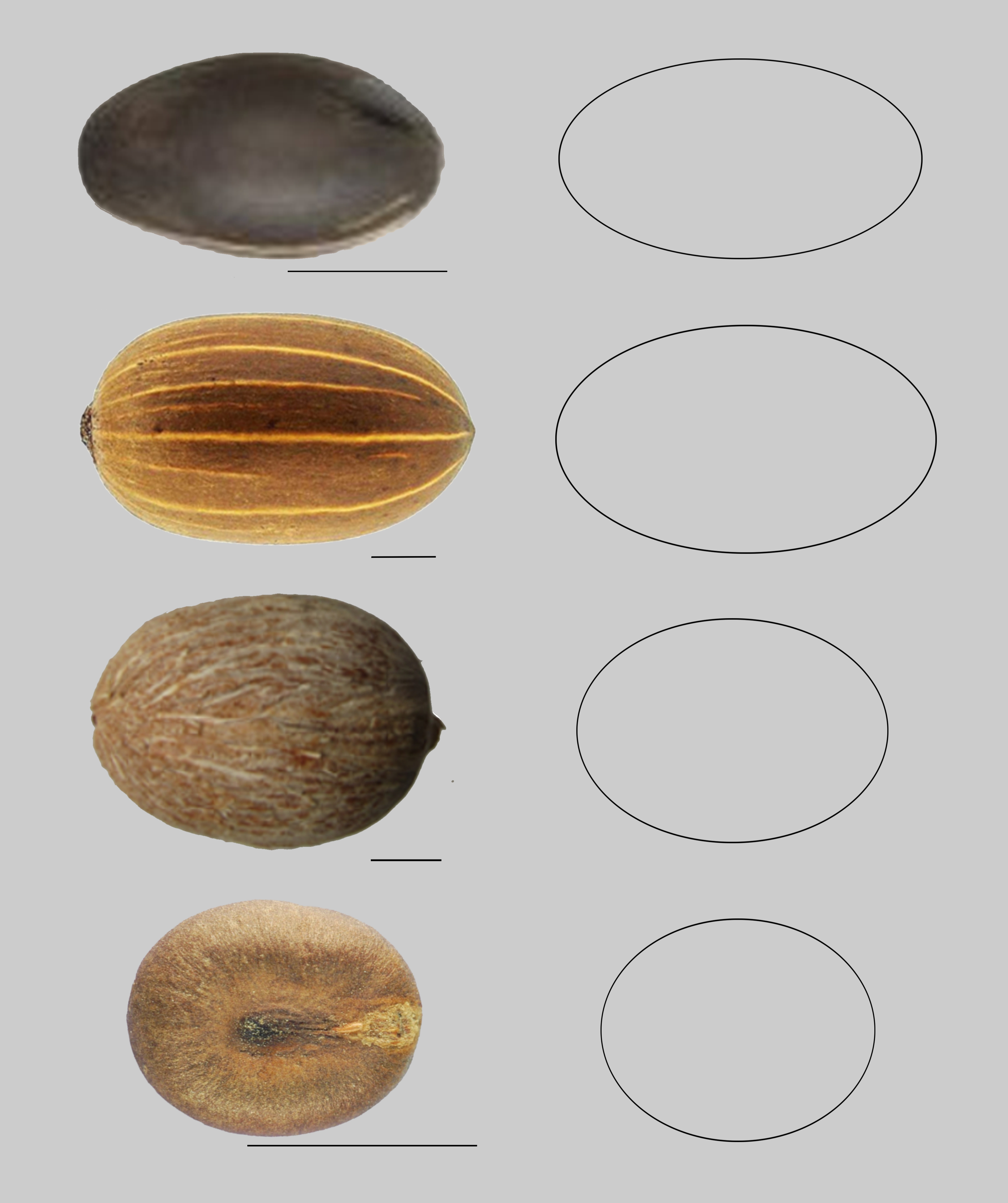 Figure 3. Representative examples of elliptic seeds with their respective models (J index values are indicated between parentheses): Iriartella sp. (94.4), Socratea exorrhiza (91.6), Adonidia merrillii (92.0), and Washingtonia filifera (91.9). The seed of W. filifera (bottom) is oriented with the attachment of the peduncle in a frontal position while in the other three seeds the attachment of the peduncle is in a lateral position. Aspect ratio values for the ellipses are (from top to bottom): 1.8, 1.7, 1.4, and 1.2. Bars represent 0.5 cm.

As was pointed out in Section 4.3, the oval has just one symmetry axis. A list of species whose seed images resemble ovals are given in Table 3. A useful mode to define the oval is by an algebraic formula, see, e.g., Equation (3). Figure 4 contains representative examples of oval seeds with their respective models: Serenoa repens (Corypheae, Coryphoideae), Desmoncus sp. (Cocoseae, Arecoideae), Astrocaryum standleyanum (Cocoseae, Arecoideae), and Medemia argun (Borasseae, Coryphoideae). Other examples are also found in diverse sub-families and tribes. 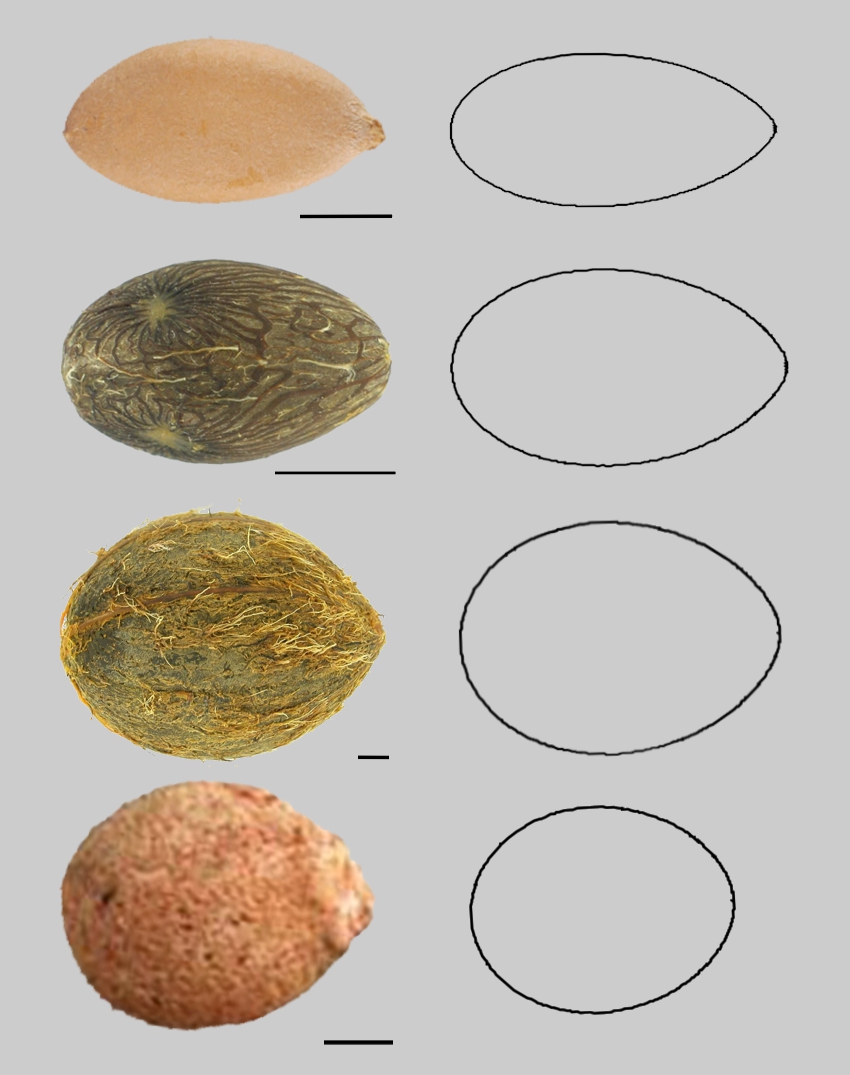 Figure 4. Representative examples of seeds, whose images adjust well to different ovals, (J index values are indicated between parentheses). From top to bottom (more to less elongated): Serenoa repens (90.0), Desmoncus sp. (93.6), Astrocaryum standleyanum (91.5), and Medemia argun (92.1). The ovals correspond to the equations given in the text. Bars represent 0.5 cm.

The shape of the seeds represented in Figure 4 are ovals and all the curves representing them have been obtained with Equation (3) varying the parameters:

Once a model has been proposed for a species or a population, the proposal has to be validated statistically. T-test allow us to validate the hypothesis that seed lots belong to a given morphological type. We consider that a seed population belongs to a given morphological type when the hypothesis test concludes that the mean J index of the species is equal to or superior to 90 with a significance level of 95%. An example is later given with seeds of Phoenix canariensis (Figure 5).

The superellipses and squared circles are figures that, to our knowledge, have not yet been mentioned in the morphological description of seeds in the Arecaceae.

The squared circle may be considered as a particular case of the superellipse (Equation 6). Figure 5 represents the superellipse and seeds representative of this morphological type. The seeds of P. canariensis (Phoeniceae, Coryphoideae), Welfia regia (Geonomateae, Arecoideae), and Raphia taedigera (Lepidocaryeae, Calamoideae) adjust to a superellipse. The hypothesis test done with 25 seeds (sample mean = 92.15) concludes that the mean J index of the population of P. canariensis from which the seeds were taken is equal or superior to 90 with a significance level of 99%.

Figure 6. The squared circle (model) and representative examples of seeds adjusting to it (between parentheses the values of J index with the respective models): Clinosperma macrocarpa (91.5), Johannesteijsmannia altifrons (92.4), and Mauritia flexuosa (92.0). In C. macrocarpa the seed is orientated with the stem end in a central position, while the other seeds present a side view. The model is defined by Equation (6) with  =  = 1, and  = 3.

3.5. Seeds Resembling Other Figures: Half Lemniscate, Lens and Waterdrops

The figures of half lemniscate and waterdrops resemble elongated ovals with a peak in their apex. Depending on the degree of asymmetry perpendicular to the symmetry axis, the seeds resembling ovals may have shapes near to ellipses, such as Medemia argun or, on the other hand, be more asymmetric and divergent from the ellipse, such as Serenoa repens (see Figure 6). In other seeds there is still more asymmetry between the two poles, giving images similar to half lemniscate as in the case of some seeds of Aphandra natalia (Phytelepheae, Coryphoideae, Figure 7). Seeds of this type can be observed in other species such as Astrocaryum urostachis, Syagrus romanzoffiana and Beccariophoenix fenestralis (Cocoseae, Arecoideae), Phytelephas macrocarpa (Phytelepheae, Coryphoideae), Pholidostachys panamensis (Geonomeae, Arecoideae), and Wodyetia bifurcata (Areceae, Arecoideae). 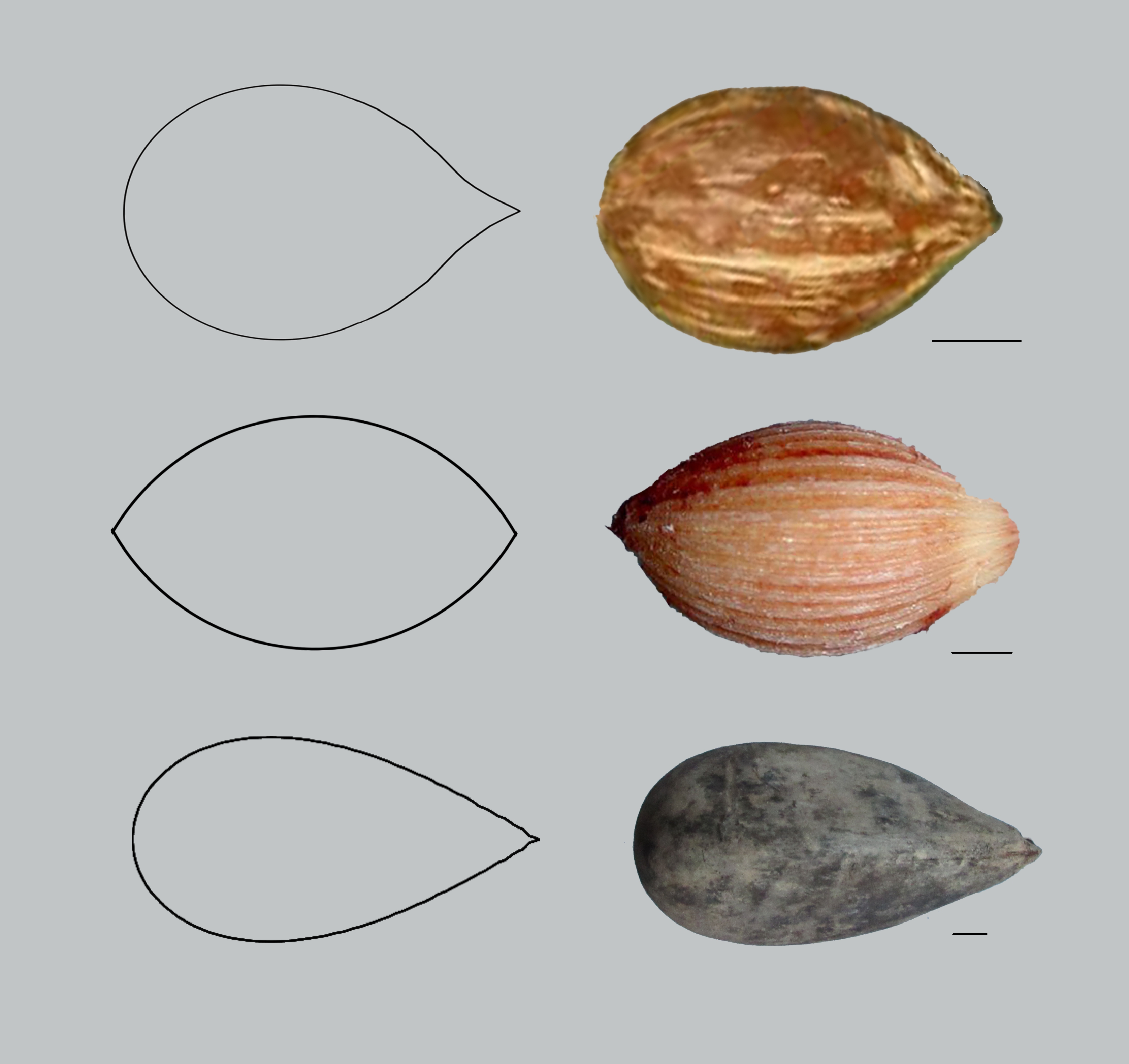 Figure 7. Water Drop, Lens, and Half Lemniscate with examples of seeds resembling each of the models (between parenthesis values of J index with the respective model): Syagrus romanzoffiana (92.3, mean of three seeds), Asterogyne martiana (91.8), and Aphandra natalia (93.8). Bars represent 0.5 cm.

Seed morphometry provides interesting tools for the identification of species in regions with a great diversity of palms, such as the Amazon basin. The seeds are critical structures in taxonomy in many cases where vegetative organs are similar among different species. In addition, thanks to their very resistant endocarp, seeds are easy to find and last a long time under the tree producer allowing differentiation up to the level of species in many instances.

The development of software of image identification based on geometric models may be an interesting contribution to future biodiversity studies.