Submitted Successfully!
Thank you for your contribution! You can also upload a video entry related to this topic through the link below:
https://encyclopedia.pub/user/video_add?id=872
Check Note
2000/2000
Gla-Rich Protein in CKD
Edit
Upload a video
This entry is adapted from 10.3390/jcm9030635

Chronic kidney disease (CKD) is estimated to affect more than 10% of the global population and represents an increasing health and economic burden for the society. Cardiovascular disease (CVD) is the most important complication of CKD and the primary cause of death in these patients. Chronic kidney disease-mineral and bone disorder (CKD-MBD), which is a common complication of CKD patients, involves changes in mineral ion homeostasis, bone quality and turnover, cardiovascular and soft tissue calcifications, highly contributing for cardiovascular outcomes. Vascular calcification (VC) is one of the strongest predictors of cardiovascular risk in chronic kidney disease (CKD) patients which is associated with significant morbidity and mortality. New diagnostic/prognostic tools are required for early detection of VC allowing interventional strategies. Gla-rich protein (GRP) is a cardiovascular calcification inhibitor, whose clinical utility still remained unknown. The present clinical study including a cohort of 80 diabetic patients with mild to moderate CKD (stages 2–4) explored, for the first time, correlations between levels of GRP in serum with CKD developmental stage, mineral metabolism markers, VC and pulse pressure (PP). The results shown an association between GRP, renal dysfunction and CKD-MBD. The relationship between low levels of GRP and vascular calcifications suggests a potential clinical utility for GRP as an early marker of vascular damage in CKD.

Epidemiologically, CKD, diabetes mellitus and atherosclerosis are the clinical conditions that most contribute towards development of vascular and valves calcification[1][2]. Although the relevance of vascular calcification (VC) assessment is recognized in clinical practice, most of the available quantitative methods have many shortcomings[3]. Therefore, the development of biomarkers for early detection of VC are crucial for the prevention of CVD outcomes in CKD patients, allowing preventive measures to reduce the development and progression of VC, left ventricular hypertrophy and arterial stiffness. VC is a highly-controlled multifactorial process that requires constant inhibition[4]. High prevalence of VC in CKD patients is suggested to result from several interconnected processes involving dysregulation of endogenous calcification inhibitors, abnormal mineral metabolism and inflammation[5]. Biochemical targets known to be involved in these pathological processes have been explored for their potential use as biomarkers for VC and cardiovascular risk assessment[4]. Gla-rich protein (GRP), also known as upper zone of growth plate and cartilage matrix associated protein (UCMA)[6], is a circulating vitamin K-dependent protein (VKDP) with a dual capacity to function as an inhibitor of pathological calcification and anti-inflammatory agent, in the articular and cardiovascular systems[7][8][9][10]. Although GRP has been suggested as a potential marker for VC, its clinical utility has never been shown.

In this first GRP clinical study, a clear association between circulating levels of GRP and the progression of CKD pathology and vascular calcification was shown. This study included all eligible type 2 diabetic patients with CKD stages 2-4 (n=80) followed in outpatient nephrology consultation from 2010 to 2017, where correlations between levels of GRP in serum with mineral metabolism and inflammation markers, CKD developmental stage, VC and pulse pressure (PP), were explored. Vascular calcification score (VCS) was evaluated using the plain x-ray of the hands and pelvis (Adragão score), and increased cardiovascular risk was considered for VCS≥3. Measurements of GRP in serum were performed using a recently developed sandwich ELISA (GenoGla Diagnostics)[9]. 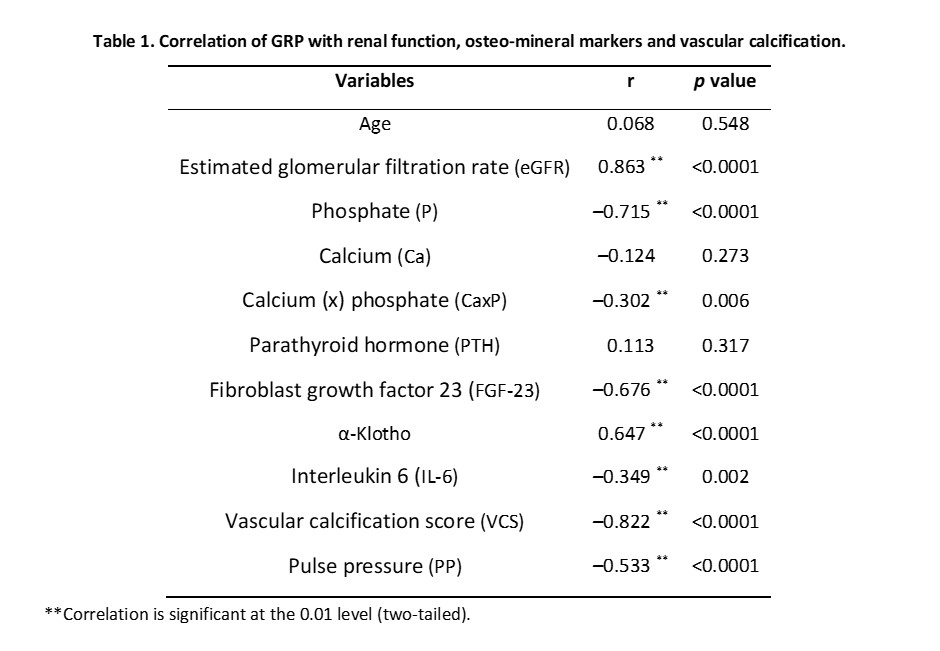 Simple linear regression analysis demonstrated a positive association between GRP serum levels and eGFR (Figure 1a), which remained significant after adjustments for age and gender (r = 0.823, p < 0.0001). Furthermore, GRP levels were shown to significantly decrease from stage 2 to stage 4 CKD (Figure 1b). These results shown that a decrease in eGFR is accompanied by a decrease in GRP levels from CKD stage 2 to stage 4, indicating GRP as a possible early marker associated with renal dysfunction. Although the current study does not allow us to infer on the causality of this relationship, it has been demonstrated that the prevalence of VC increases as eGFR declines while low eGFR is associated with cardiovascular morbidity and mortality[11][12][13]. Moreover, VC is a suggested link between low eGFR and worse cardiovascular outcome[14][15]. It is presently unclear whether the relationship between GRP and eGFR might be beyond VC, eventually involving kidney disease physiopathology.

The relationship between bone mineral disorders and VC is well established and a major concern on the management of cardiovascular risk in the CKD population. In this complex interplay, the contribution of phosphate metabolism for VC and cardiovascular outcomes in CKD settings has been widely demonstrated[4][3]. Increased levels of serum P, FGF-23 and CaxP, and lower levels of α-Klotho, have all been associated with cardiovascular outcomes in the CKD population[4][16][17]. The association of GRP with CKD-MBD and VC are consistent with reported data regarding GRP functionality. GRP has been shown to be involved in VC inhibition at multiple levels, through the inhibition of VSMCs osteochondrogenic differentiation or the direct inhibition of mineral formation, maturation and growth, both in circulation and at the vascular tissue[6][9][18].

Limitations of our study include the small sample size, the fact that serum GRP levels were measured at a single point, and the absence of reference intervals for GRP levels in a healthy population. Also, this study included subjects with mild to moderate CKD followed in outpatient diabetic nephropathy clinic and may not be representative of kidney disease of other etiology. The main strength of this study clearly resides in the novelty concerning the clinical utility of GRP. The presented data show that decreased levels of GRP in circulation parallels the progression of CKD and increased vascular calcification, suggesting a future potential use of GRP as an early marker of vascular damage in CKD patients.

More
© Text is available under the terms and conditions of the Creative Commons Attribution (CC BY) license; additional terms may apply. By using this site, you agree to the Terms and Conditions and Privacy Policy.
Upload a video for this entry
Information
Subjects: Cardiac & Cardiovascular Systems
Contributors MDPI registered users' name will be linked to their SciProfiles pages. To register with us, please refer to https://encyclopedia.pub/register :
Ana Paula Silva
,
Carla Viegas
,
Dina Simes
View Times: 414
Entry Collection: Hypertension and Cardiovascular Diseases
Revisions: 2 times (View History)
Update Time: 02 Nov 2020
Table of Contents
1000/1000
Hot Most Recent