Submitted Successfully!
Thank you for your contribution! You can also upload a video entry related to this topic through the link below:
https://encyclopedia.pub/user/video_add?id=7282
Check Note
2000/2000
Nitrogenase
Edit
Upload a video
This entry is adapted from 10.3390/ijms22010139

Nitrogenase defines the familty of enzymes that catalyze the reduction of N2 (molecular nitrogen) to NH3 (ammonia). It is the only enzyme family which can realize this process of nitrogen fization.

Nitrogenase is a unique system able to convert N2 to NH3 [1]. Total cost of N2 reduction corresponds to eight electrons being transferred and 16 MgATPs being hydrolyzed. Three classes of nitrogenase differ in the heteroatom present in the active site metal cluster (Mo, V or Fe), but the Mo-dependent nitrogenase is the most important and best-studied enzyme [2]. It contains two metallo-components, dinitrogenase (molybdenum–iron (MoFe) protein) and dinitrogenase reductase (Fe protein), which associate and dissociate in a catalytic cycle also requiring a reducing source and MgATP [3]. The MoFe protein contains two metal clusters: the iron–molybdenum cofactor (FeMo-co) [4], which provides the active site for substrate binding and reduction, and a P-cluster, involved in electron transfer from the Fe protein to FeMo-co [5]. The FeMo cofactor is thus the key element for the mechanism of N2 fixation. It also contains an interstitial carbon atom [6] which is key for the CO2 conversion mechanism, providing stability to the complex. Figure 1a reports the model of the FeMo cofactor, while Figure 1b shows the proposed mechanism of N2 fixation [1]. 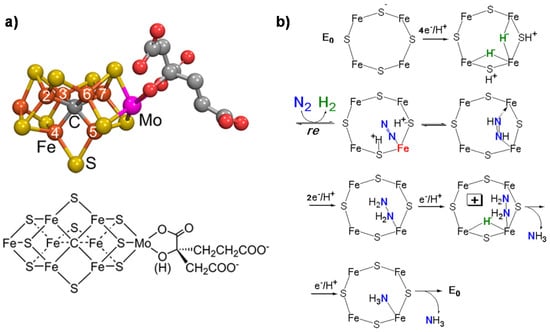 Figure 1. (a) FeMo cofactor (Fe in orange, Mo in magenta, S in yellow, C in gray and O in red); (b) mechanism (key elements) of N2 fixation on FeMo-co. Adapted from [1]. Not subject to US copyright.

The simultaneous electron/proton transfer to an undissociated coordinated N2 molecule is a different feature regarding the mechanisms in iron catalysts for the high-temperature/pressure HB (Haber-Bosch) process, where the first (rate-limiting) step is the dinitrogen dissociative chemisorption followed by sequential hydrogenation of the intermediates [9][10][11][12]. The reason for the difference in the mechanism is that the nitrogen molecule dissociation path, in principle, is preferable as sequential steps of electron transfer and hydrogenation of the nitrogen adatoms. However, the strongly bound nitrogen species formed by dissociation require high temperatures to avoid catalyst inhibition, and, therefore, there is a need for high-pressure operations (as this is an exothermic reversible reaction). For the undissociated N2 molecule activation, sequential electron and proton transfer steps would generate high-energy intermediates [13]. For example, adding one electron and one proton to N2 to form a N2H* species requires −3.2 V vs. normal hydrogen electrode (NHE). For multi-electron reduction processes, for example, to produce N2H5+ adspecies, the reduction potential becomes −0.23 V. Multi-electron reactions are thus necessary in the low-temperature profile, in agreement with what was observed for nitrogenase, and to avoid/minimize the side reaction of H+/e− recombination to form H2, which is also possible in the enzyme path. 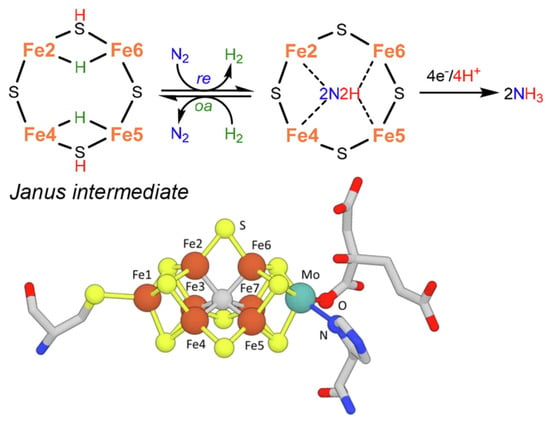 Nitrogenase, particularly in the vanadium form [15], can also catalyze the reductive carbon–carbon coupling of COx into hydrocarbon products. This is also a unique feature and suggests a role of this enzyme as an evolutionary link between the nitrogen and carbon cycles on Earth [16]. The mechanism of C-C coupling is not clear, but progress has been made recently [17]. From CO2, the mechanism involves a first step of reduction of CO2 to CO by the Fe protein ([Fe4S4]0) of nitrogenase [18], followed by the reductive carbon–carbon coupling of two coordinated CO molecules on the same active site of the nitrogenase cofactor proposed for N2 fixation (M-cluster). The tentative mechanism is presented in Figure 3. 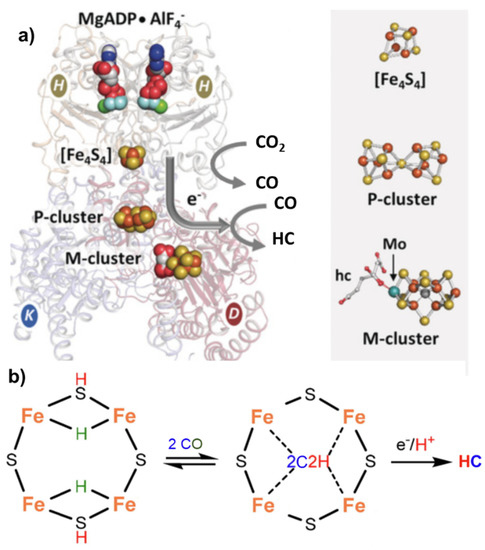 Figure 3. (a) Nitrogenase enzyme with indications of the key components involved in electron transfer, including MgADP AlF4−, [Fe4S4] cluster, P-cluster and M-cluster with indication of the active centers involved in CO2 to CO and CO2 to hydrocarbon (HC) conversion. Adapted from [16]. Copyright 2016 Wiley. (b) Proposed schematic mechanism of the active sites in FeMo cofactor (M-cluster) for conversion of CO to HC.

The same Janus intermediate proposed for N2 fixation (symmetric hydride structure) reacts with two CO molecules (produced on the Fe protein) to form an ethyne-like intermediate which can be hydrogenated to ethylene or could react further to form a ferracycle (formed by C2H4 binding to one of the Fe atoms [19]), leaving the other Fe free to form other Fe-hydride species and further coordinate CO, which can react with the ferracycle species, to give C2 products (hydrocarbon, oxygenated chemicals) (Figure 4).

Figure 4. Proposed schematic mechanism of the active sites in FeMo cofactor for conversion of C2 intermediate to C3 products (hydrocarbon, oxygenates) via formation of a ferracycle species.

More
© Text is available under the terms and conditions of the Creative Commons Attribution (CC BY) license; additional terms may apply. By using this site, you agree to the Terms and Conditions and Privacy Policy.
Upload a video for this entry
Information
Subjects: Chemistry, Physical
Contributor MDPI registered users' name will be linked to their SciProfiles pages. To register with us, please refer to https://encyclopedia.pub/register :
Gabriele Centi
View Times: 194
Revisions: 3 times (View History)
Update Time: 19 Feb 2021
Table of Contents
1000/1000
Hot Most Recent