Submitted Successfully!
Thank you for your contribution! You can also upload a video entry related to this topic through the link below:
https://encyclopedia.pub/user/video_add?id=7267
Check Note
2000/2000
Electrospinning Proteins for Wound Healing
Edit
Upload a video
This entry is adapted from 10.3390/pharmaceutics13010004

In recent years, there has been a growing interest for electrospun polymeric wound dressings with fiber diameters in the nano- and micrometer range. Such wound dressings display a number of properties, which support and accelerate wound healing. For instance, they provide physical and mechanical protection, exhibit a high surface area, allow gas exchange, are cytocompatible and biodegradable, resemble the structure of the native extracellular matrix, and deliver antibacterial agents locally into the wound.

The wound healing process is associated with four overlapping and well-orchestrated stages: homeostasis, inflammation, proliferation and remodeling. Each stage involves a cascade of events to ensure prevention of blood loss, elimination of bacterial contamination, regeneration and formation of a new skin tissue, respectively. A variation from the norm in this process results in a delay or prolongation of any of the healing stages, which in turn leads to impaired healing [1]. The interruption in the healing process may occur for a number of reasons connected to one’s lifestyle and health condition. For example, smoking, malnutrition, obesity, low mobility, neuropathy, diabetes, vascular diseases and skin disorders have been linked to the increasing chronicity of wounds, where healing has not been achieved within 3–6 weeks [2][3][4].

Compromised wound healing represents a complex problem of multiple dependent molecular and cellular processes that are closely intertwined. A slight dysregulation in those processes leads to a development of a chronic non-healing condition, which requires a combinational approach of diverse strategies to facilitate healing. Different polymeric wound dressings have been created to supply favorable environment for wound healing, to absorb exudate, allow vapor exchange across the scaffold, maintain moist conditions, provide mechanical support and protect from further bacterial contamination. Such wound dressings have also been employed to deliver active agents such as antibiotics, antiseptics, anti-inflammatory drugs and biomolecules to direct the healing process to reach complete healing [5][6] (Figure 1). 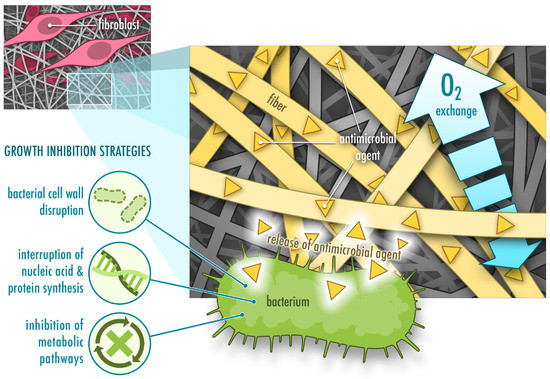 The leading causes of non-healing chronic wounds are infection, pathological inflammation and formation of biofilms [2][6]. Therefore, wound care usually comprises of debridement followed by antimicrobial treatment and application of wound dressings. Debridement is required to clean the wound bed from exudate, necrotic tissue and bacterial load. Antimicrobial treatment prevents further bacterial growth and formation of biofilms. Antimicrobial agents usually follow one or several strategies to attack bacterial cells, including disruption of the bacterial cell wall, interruption of nucleic acid and protein synthesis, and dysregulation of metabolic pathways [7] (Figure 1). Antiseptics, antibiotics or other biomolecules are either applied directly or incorporated into a wound dressing [6]. In comparison to systemic administration of antimicrobial treatments, topical application requires lower concentrations, displays fewer side effects and lowers the risk of developing antibiotic resistance [6][8]. Topical application of antimicrobial agents such as antibiotics often combines a rapid initial release to kill bacteria or inhibit bacterial growth followed by a slower release to prevent further bacterial growth [9]. In order to prevent development of microbial resistance to antibiotics, silver nanoparticles have been used in certain materials for wound healing instead of antibiotics. However, recent studies demonstrate that bacterial resistance also occurs against silver nanoparticles due to an induction of nanoparticle aggregation as a result of the production of adhesive proteins by the bacteria. This problem can be overcome by additional stabilization of the nanoparticles by surfactants or polymers [10][11].

A variety of wound dressings facilitating wound healing are currently available on the market and new advanced materials are being developed (e.g., films, hydrogels, foams, hydrocolloids and nanoparticles). In particular, large research efforts have been directed to fabricate nanofibers [5][12][13]. Unlike other types of biomaterials, nanofibers stand out due to their unique structure and the tunability of their physical and mechanical properties. Their versatility and the easy fabrication process facilitate obtaining materials with desired characteristics for the complex wound healing process. High surface area and homogenous drug distribution makes nanofibers attractive as drug delivery systems with high drug loading capacity and controlled release. Resemblance of nanofibers to collagen or elastin fibers in the extracellular matrix (ECM) of healthy skin allows them to provide additional support for fibroblasts and keratinocytes, which adhere to the fibers, migrate across the wound bed and help regenerate and close the damaged tissue. Modifications of the surface morphology of nanofibers and the porosity of the nanofibrous matrix further promote adherence and migration of these cells [12] (Figure 1). However, even though electrospun fibers are often have a high porosity, this property is dependent on the fiber diameter and is difficult to control. This may also limit cell penetration into the scaffold in some cases [14].

A variety of methods to fabricate fibers have been developed over the years and mainly include solution and melt electrospinning [15]. This review focuses on nanofibers created from protein solutions using the solution electrospinning process. Electrospinning is based on applying a high voltage to a polymer solution to transform a drop at the needle tip into a cone shape in order to generate a jet. The ejected jet undergoes a number of instabilities, during which the solvent from the solution is evaporated and dry fibers are collected on the grounded or oppositely charged plate. The process is shown in Figure 2. The morphology, diameter size and distribution of electrospun fibers can be adjusted and tuned according to the solution (e.g., concentration, molecular weight, viscosity, conductivity, surface tension, dielectric constant, evaporation rate and dipole moment) and process parameters (e.g., temperature, humidity, flow rate, voltage and working distance) [16]. For example, larger fiber diameter is often associated with higher flow rate, higher applied voltage and lower distance between the needle tip and the collector. However, there are exceptions to these rules as for instance a higher voltage may lead to more solution deposition [15]. Therefore both, the properties of the solution and the process parameters should be considered during optimization of the electrospinning process [16]. 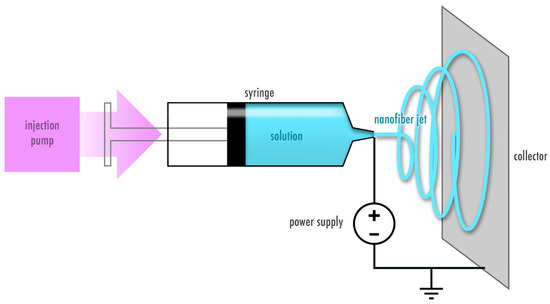 Figure 2. Electrospinning process. A polymer solution is subjected to a high voltage output to create a polymer jet that deposits as dry fibers on the collector.

2. Proteins as a Promising Starting Material for Electrospun Wound Dressings

The initial use of synthetic polymers in electrospinning has noticeably shifted towards implementation of natural polymers such as proteins and carbohydrates [24]. In comparison to synthetic polymers such as polylactic acid (PLA) [25] and polyurethane (PU) [26][27], natural polymers do not purely rely on the use of harsh and toxic organic solvents for dissolution. Therefore, they provide an environmentally friendly alternative, which may additionally offer better drug stability and activity as compared to pharmaceutical standard formulations, safer manufacturing and the possibility of an application on skin [28]. However, this comes at a cost of easy fabrication and reproducibility. Evaporation rate, surface tension and conductivity of the employed solvent greatly affect electrospinnability of the protein solution [15]. Moreover, electrospinning of proteins is more challenging due to the intrinsic variations in complexity of their structures, molecular weight, surface charge as well as ionic, hydrogen and disulfide bonds [29][30]. The electrospinnability of proteins depends not only on their solubility in a specific solvent, but also on the degree of protein unfolding in a particular solvent [29][31] and chain entanglement [31][32] (Figure 3). The choice of the solvent further affects crystallinity, mechanical properties, fiber size and morphology [29][31]. Therefore, the addition of synthetic polymers is often necessary to electrospin the solution continuously and without artifacts [24][33].

Proteins demonstrate attractive features as antimicrobial delivery system due to their natural origin, fast biodegradability and cytocompatibility [24][34]. Proteins used in electrospinning for wound healing applications are mainly obtained from two distinct sources: plants and animals [13][33]. Their stability, activity and degradation depend on the protein size, chemical structure, isolation and purification processes [5][35]. Different methods for protein extraction and purification may affect the obtained raw material’s purity and composition [5][36][37], which in turn impacts reproducibility of the electrospinning process and properties of the final product [38].

Some of the main differences between plant- and animal-based proteins are their availability and price. Plant proteins tend to be available in larger amounts and at a lower cost [31][34][39][40]. As compared to synthetic polymers, proteins are in general more challenging to electrospin due to their heterogeneity in structure and surface charge, solvent-dependent protein unfolding and low viscosity, which lead to a non-continuous electrospinning process and formation of beads [24][29]. Moreover, the final product may lack stability in water, resulting in a loss of fiber structure [41][42]. To compensate for these drawbacks, different strategies have been implemented that include the use of cross-linking agents, toxic organic solvents and addition of synthetic polymers [33].

Plant proteins that have been used to prepare electrospun wound dressings alone or in combination with other natural and/or synthetic polymers are summarized in Table 1. These include zein protein, soy protein and pea protein.

A lot of animal-derived proteins used in electrospinning are obtained from milk, including casein, whey, lactoferrin and lysozyme, or connective tissue, such as collagen and elastin. In comparison to plant-derived proteins that mostly require an incorporation of antimicrobial agents, proteins obtained from milk possess innate antimicrobial properties due to their iron-binding properties [56][57] and ability to disrupt bacterial cell walls [56][58]. Therefore, such proteins carry a dual function as a material basis with antimicrobial effect (Table 2).

More
© Text is available under the terms and conditions of the Creative Commons Attribution (CC BY) license; additional terms may apply. By using this site, you agree to the Terms and Conditions and Privacy Policy.
Upload a video for this entry
Information
Subjects: Biochemistry & Molecular Biology
Contributor MDPI registered users' name will be linked to their SciProfiles pages. To register with us, please refer to https://encyclopedia.pub/register :
Andrea Heinz
View Times: 247
Revisions: 2 times (View History)
Update Time: 22 Feb 2021
Table of Contents
1000/1000
Hot Most Recent