Submitted Successfully!
Thank you for your contribution! You can also upload a video entry related to this topic through the link below:
https://encyclopedia.pub/user/video_add?id=6796
Check Note
2000/2000
Visual Appearance of Oil
Edit
Upload a video
This entry is adapted from 10.3390/jmse9010097

The visual appearance of oil spills at sea is often used as an indicator of spilled oil properties, state and slick thickness. These appearances and the oil properties that are associated with them are reviewed in this entry. The appearance of oil spills is an estimator of thickness of thin oil slicks, thinner than a rainbow sheen (<3 µm). Rainbow sheens have a strong physical explanation. Thicker oil slicks (e.g., >3 µm) are not correlated with a given oil appearance. At one time, the appearance of surface discharges from ships was thought to be correlated with discharge rate and vessel speed; however, this approach is now known to be incorrect. Oil on the sea can sometimes form water-in-oil emulsions, dependent on the properties of the oil, and these are often reddish in color. These can be detected visually, providing useful information on the state of the oil. Oil-in-water emulsions can be seen as a coffee-colored cloud below the water surface. Other information gleaned from the oil appearance includes coverage and distribution on the surface.

When an oil spill occurs, there is a need for extensive information including the location of the oil, its distribution, its trajectory and its thickness [1][2][3]. Thickness is of particular interest because many countermeasures are dependent on oil being a minimum thickness in order to be effective. This is true for in-situ burning and chemical oil spill dispersion, and, to a certain degree, for oil removal by skimmers.

Observations in the visible spectrum, be they by human eyesight or through the use of cameras or spectrometers, have been used over the past decades to gain information about spilled oil [1][3]. The suggested uses of such observations have been used to estimate the state of the oil, the position and distribution, its condition and thickness. The primary tool for visual observation of oil is to use its color or appearance. Most crude and fuel oils are black; however, when very thin (<3 µm), oil has other appearances based on its interaction with light. These light interactions can change the color or appearance of the oil. Efforts have been made to correlate these colors and appearance with the thickness of oil. This correlation of color and thickness will be reviewed in detail below. Further, it is noted that there are variances to the appearance of oil caused by factors such as viewing angle, wind effects, solar illumination and water conditions.

In the past, visual observations were standardized in various codes to provide users with a standard way of interpreting appearances of oil on the sea [1]. These did not enter the broad scientific literature; rather, they became industry and government practices. This paper will examine the appearance of the oil on the sea and provide insight into those appearances that provide correct information about the state of the oil.

The appearance of oil on the sea is subject to several variances [1]. The most important variable is that of oil type. Crude oils are typically brown to black when on the sea in thicker slicks (>3 µm) [1]. Fuel oils are black. The native oil color can have an influence on the final appearance. Secondly, the viewing angle has an influence on appearance when viewing thin slicks [1]. In daylight, with the broad illumination that occurs, the viewing angle is not as important [1]. Atmospheric conditions have an effect on appearance [1]. For example, slick observations can be clearer when there is cloud cover. Atmospheric haze can affect the clarity of observations. Finally, sea conditions can have an influence [1]. Because oil slicks often cover vast areas, the effect of sea conditions on observations is minimized.

Studies have shown that rainbow sheens, a particular form of slick appearance illustrated in Figure 1, actually has different physical origins from other thickness–appearance relationships [1][7][8]. Hornstein [7][8] studied the various slick phenomena and concluded that rainbow sheen was the result of constructive and destructive interference between light reflected from the oil surface and that from the water surface. This is a unique indicator of oil thickness.

Figure 1. A photograph of a rainbow sheen taken from an aircraft at an altitude of about 300 m. This color of sheen has a strong physical relation to 1 to 1.5 µm.

Water-in-oil emulsions sometimes form in rough waters after oil products are spilled. These emulsions, often called “chocolate mousse” or “mousse” by oil spill workers, can make the cleanup of oil spills very difficult [9]. When water-in-oil emulsions form, the physical properties of oil change dramatically. As an example, stable emulsions contain from 60 to 80% water, thus expanding the spilled material from 2 to 5 times the original volume. Most importantly, the viscosity of the oil typically changes from a few hundred mPa·s to about 100,000 mPa·s, an increase by a factor of 500 to 1000. A liquid product is changed into a heavy, semi-solid material.

There are several types of emulsions, two of which are colored reddish because of the specular reflection of light from the water droplets in the oil. These colors can be seen from the air and are distinctive when most of the oil in the scene is emulsified in this manner [4]. This is shown in Figure 2. It should be noted that water-in-oil emulsions sometimes form, dependent on various conditions [10].

Figure 2. Emulsion shown from an aircraft from an altitude of approximately 100 m. 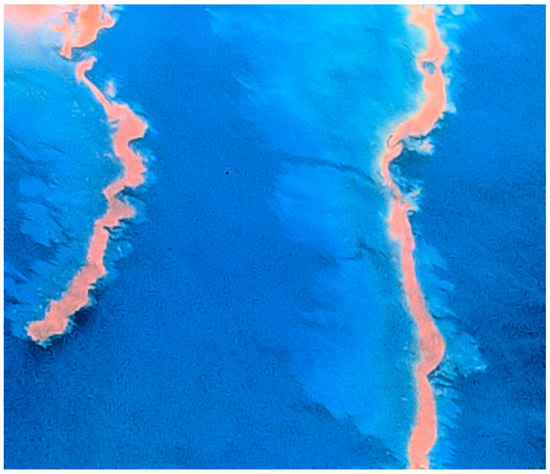 Figure 3. Photograph showing emulsion streaks surround by sheen (thin oil). This photograph was taken from an aircraft flying at about 1000 m.

This shows that the reddish-brown characteristic of water-in-oil emulsions, meso-stable and stable, can be visually identified. It should be noted that the presence of emulsions negates other appearance information; however, sheen or thin slicks can exist alongside emulsion, as shown in Figure 3. Emulsion does not form in thin slicks or sheen.

Spill countermeasures sometimes involve the application of chemical dispersants to the oil. The results of such activity may result in a dispersion of droplets under the oil slick. This oil-in-water emulsion is called a dispersion in the oil spill trade. If dispersion is successful, a coffee-colored plume in the water is formed, such as that shown in Figure 4 [5][12]. This is a result of the light reflection from the many 5 to 50 µm droplets in the water column [13]. The coffee-colored plume is used as a sign of dispersant effectiveness by oil spill cleanup personnel. This coffee-colored plume develops after about 20 min after the application of dispersants, slowly dissipates and is generally visible up to about 3 h after a spill dispersion. The appearance of oil-in-water emulsions is dependent on their being no oil on the water’s surface to block the transmission of light into and out of the water column.

More
© Text is available under the terms and conditions of the Creative Commons Attribution (CC BY) license; additional terms may apply. By using this site, you agree to the Terms and Conditions and Privacy Policy.
Upload a video for this entry
Information
Subjects: Environmental Sciences
Contributor MDPI registered users' name will be linked to their SciProfiles pages. To register with us, please refer to https://encyclopedia.pub/register :
Merv Fingas
View Times: 962
Revisions: 2 times (View History)
Update Time: 27 Jan 2021
Table of Contents
1000/1000
Hot Most Recent