Submitted Successfully!
Thank you for your contribution! You can also upload a video entry related to this topic through the link below:
https://encyclopedia.pub/user/video_add?id=6190
Check Note
2000/2000
Bifidobacteria
Edit
Upload a video
This entry is adapted from 10.3390/microorganisms9010008

The Actinobacteria phylum represents one of the most numerous and heterogeneous groups of microorganisms present in nature[1][2]. These Gram-positive bacteria are characterized by a high GC genome content ranging from 51% to more than 70%, and exhibit different morphologies, including unicellular rods or Y-shaped rods, and complex multicellular consortia[1][2]. Furthermore, these bacteria are able to produce bioactive natural compounds and these features are reflected in their ability to adapt to several quite distinct ecosystems such as various terrestrial environments, as well as the bodies of mammals and birds[1][2]. In fact, this phylum includes pathogens (e.g., Mycobacterium spp., Nocardia spp., Tropheryma spp., Corynebacterium spp., and Propionibacterium spp.), soil inhabitants such as Streptomyces spp., plant commensals (e.g., Leifsonia spp.), nitrogen-fixing symbionts (Frankia), and human gut inhabitants (Bifidobacterium spp.)[1][2]. 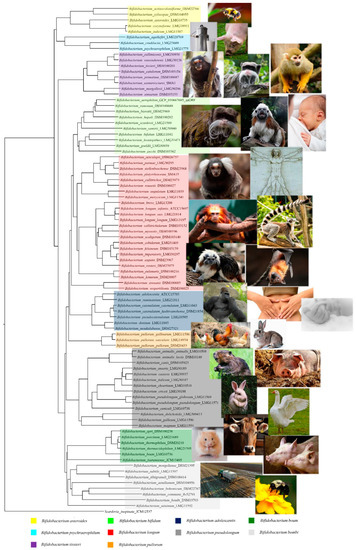 Bifidobacteria also naturally occur in the gastrointestinal tract (GIT) of animals, such as nonhuman mammals, insects, and birds[5][6][7][8][9][10][11], while they have also been isolated from human blood[51], sewage[42], the oral cavity[55], and fermented milk[15]. In this context, it has been demonstrated that the ability of bifidobacteria to adapt to specific environments is species-dependent[4]. Until recently, scientific studies revealed that B. longum, B. adolescentis, B. pseudolongum, and B. bifidum species possess a cosmopolitan lifestyle[4], whereas other bifidobacterial species appear to be adapted to the GIT of particular animals (e.g., Bifidobacterium cuniculi for rabbits, Bifidobacterium angulatum for cows, and Bifidobacterium gallinarum for chickens) or the human gut (e.g., B. breve and B. longum species)[4][12]. However, recent ecological studies, based on Internally Transcribed Spacer (ITS) profiling, have revealed that the distribution of Bifidobacterium species is not host-specific[57][58]. For example, the B. breve species, which until that point had only been associated with the human gut, was shown to be present also in domesticated animals[57]. Furthermore, particular species, such as Bifidobacterium actinocoloniiforme, B. asteroides, Bifidobacterium bohemicum, B. bombi, and Bifidobacterium indicum, which were previously thought to be highly specialized to colonize the insect gut, were shown to be widely distributed among various mammalian hosts[58]. Notably, the distribution of bifidobacterial species in different ecological niches reinforces the idea that anthropogenic influences may have promoted such apparent horizontal transmission events.

The Bifidobacterium genus is one of the most abundant bacterial genera present in the human gut during the early stages of life[59][60][61] and these microorganisms are reported to be among the first bacterial colonizers of the newborn’s GIT[62]. It has been demonstrated that bifidobacteria may engage in vertical transmission that occurs between a mother and her newborn during birth and possibly through subsequent breastfeeding[63][64]. This fascinating phenomenon not only occurs in human beings[65] but also in other mammalian species[58]. In this context, some studies have shown how taxonomic classification of bifidobacteria present in the mother’s microbiota strongly correlates with that of the infant[66][67]. In particular, a study based on ITS-profiling and shotgun-metagenomics approaches has led to the identification of the species shared between a mother and her child[68]. In this study, the microbiota of a mother’s fecal and milk samples were assayed together with corresponding infant fecal samples collected at different time points. These analyses demonstrated that in some cases, identical bifidobacterial strains are shared in both mother’s and baby’s gut microbiota[68]. A B. breve strain and B. longum subsp. longum isolate were seen to be among the protagonists of vertical transmission from mother to child, being found both in the newborn’s meconium and in the fecal samples of the child for up to 90 days[68]. Several species of this genus are believed to have undergone specific genetic and metabolic adaptations in order to facilitate colonization of the infant gut, for example, the ability of certain bifidobacterial species and strains to metabolize specific oligosaccharides present in human milk[69]. Specifically, bifidobacterial species that are prevalent in the gut of infants include B. breve, B. longum subsp. infantis, B. longum subsp. longum, B. pseudocatenulatum, and B. bifidum[62], whereas B. adolescentis, B. catenulatum, B. pseudocatenulatum, and B. longum subsp. longum[70][71] are commonly occurring species in the adult intestine. In this context, it is not fully correct to consider the use of fecal material as a representation of the entire intestinal microbiota. In fact, the fecal microbiota consists not only of mucosal adherent members of the human GIT microbiota but also of transient bacteria derived from the diet or other environmental microbial contaminations[72]. Specifically, only a small number of bifidobacterial species (i.e., B. longum, B. adolescentis, B. breve, B. pseudocatenulatum, and B. pseudolongum) seem to be dominant in the examined biopsies, whereas certain other bifidobacterial species are restricted to a specific ecological niche (e.g., B. bifidum and B. pseudolongum)[73]. Analyses not only of human intestinal mucosal but also of fecal samples have shown that bifidobacterial distribution changes within ages, with a remarkable conservation in terms of species and strains in adults and children[73]. Furthermore, little is known about the diversity of bifidobacterial populations occurring between individuals and between different compartments of the GIT within the same individual[73].

The presence of bifidobacteria in the GIT has been associated with various health benefits, including the development of the immune system, protection against pathogens mediated through the process of competitive exclusion, and/or the production of metabolites such as short-chain fatty acids (SCFA) and vitamins[59][62][70][74]. Indeed, human-residential bifidobacteria (HRB) are also capable of producing folate, also known as vitamin B9 or B11, which is required for an efficient DNA replication, DNA repair/methylation, and synthesis of nucleotides, vitamins, and certain amino acids[75][76]. For these reasons, several bifidobacterial strains/species are used as active ingredients in a variety of so-called functional foods due to their perceived health-promoting or probiotic properties[2]. In this context, probiotic bifidobacterial strains belonging to B. longum and Bifidobacterium animalis subsp. lactis species are usually added to yogurt, other fermented milks, and, more recently, to cheese, which are the most popular probiotic foodstuffs at the moment[77][78]. Moreover, clinical studies have demonstrated that B. animalis ssp. lactis Bb-12, administered as probiotic adjunctive therapy, have beneficial effects in the case of infectious diarrhea caused by viruses or bacteria[79][80][81], decreasing the frequency or shortening the duration of the infection and increasing immune responses[81].

More
© Text is available under the terms and conditions of the Creative Commons Attribution (CC BY) license; additional terms may apply. By using this site, you agree to the Terms and Conditions and Privacy Policy.
Upload a video for this entry
Information
Subjects: Microbiology
Contributors MDPI registered users' name will be linked to their SciProfiles pages. To register with us, please refer to https://encyclopedia.pub/register :
Marco Ventura
,
Francesca Turroni
View Times: 388
Revisions: 3 times (View History)
Update Time: 11 Jan 2021
Table of Contents
1000/1000
Hot Most Recent