Submitted Successfully!
Thank you for your contribution! You can also upload a video entry related to this topic through the link below:
https://encyclopedia.pub/user/video_add?id=5871
Check Note
2000/2000
Porous Carbon
Edit
Upload a video
This entry is adapted from 10.3390/pr8121651

Porous carbons are an important class of porous materials that have grown rapidly in recent years. They have the advantages of a tunable pore structure, good physical and chemical stability, a variable specific surface, and the possibility of easy functionalization.

Porous materials are defined as materials with cavities, or channels, called pores. Pores are empty spaces that exist between particles of any shape in materials. These empty spaces form the porosity of the materials, defined as the volume percentage of air in the material that correspond to the total volume occupied by the voids of the material divided by the total volume of the material [1]. The porous space is a continuity of absence of solid matter nested in the continuity of solid matter. It is essentially irregular in its forms and inconsistent also in its qualities, which can be given great complexity. There are two types of porosity: open porosity (on the external environment) and closed porosity. In all cases, it is generally characterized by its volume fraction (or by the density of the porous material) and the pore size distribution. The open porosity notably controls the adhesion properties of the coatings on the surface of the material [2].

Porous materials have attracted the attention of chemists and materials scientists, and the development of new porous materials has accelerated research development in recent decades [3][4][5]. This attention comes back not only to the commercial interest that porous materials have for their application in various fields such as separation [6][7], catalysis [7][8][9], adsorption [10][11][12][13][14][15], energy storage and conversion [16][17][18][19][20][21][22][23][24], and medicine [25][26], but also, because of the scientific interest in the challenges posed by their synthesis, their treatment and their characterization. Indeed, the progress of technology and the demand for porous materials have pushed researchers to develop synthesis methods allowing for controlling the parameters that determine the structural and textural characteristics of these materials. In this context, a lot of works have shown that controlling the pore size is essential for many specific applications. However, this technological and industrial development with the growth of the world population and domestic activities are causing a remarkable increase in water pollution. It is therefore necessary to purify wastewater before it is released into the environment. Thus, several wastewater treatment technologies have been developed, the adsorption of which on porous materials is proving to be one of the most promising techniques for the removal of pollutants from wastewater due to its affordable price and ease of disposal at large-scale use [27][28][29][30]. The most widely used adsorbents are activated carbons, and they are considered the most useful for the removal of organic and inorganic pollutants due to their structural variability (macro-, meso-, and micropores), their large specific surface area, and a wide availability of functional groups [31][32].

The purpose of this review is to discuss the preparation processes of porous carbons as well as the main carbon precursors used. In addition, the performance and characteristics of the resulting carbons are investigated. Finally, the contribution of activated carbon in the field of wastewater treatment will also be discussed in detail.

According to the International Union of Pure and Applied Chemistry-USA(IUPAC) [33][34], porous materials are classified according to the diameter of the pores (dp) that constitute them, and the three classes are seen in Figure 1.

Figure 1. Classification of porosity based on pore diameter according to the International Union of Pure and Applied Chemistry (IUPAC).

Microporous materials are those whose pore diameter is less than 2 nm (dp<2 nm). They can be prepared by the sol-gel process and are widely used in catalysis and adsorption.

In this category of materials, the pore diameter varies between 2 and 50 nm (2 nm <dp<50 nm). A distinction is made between crystalline mesoporous materials and ordered amorphous materials, which are intermediate between that of crystalline microporous solids of the zeolite type and disordered amorphous solids such as silica gel [35][36][37]. Mesoporous materials have several known applications such as catalysis, filtration, pollution control, optics, and even electronics.

As these materials have fairly large pores (dp> 50 nm), they find their use in the field of decontamination of polluted water with organic dyes and as a catalyst support for the photodegradation of the pollutant [38][39][40][41].

Graphite consists of interconnected carbon atoms arranged to hexagonally form flat networks in the form of layers stacked parallel to each other (Figure 2b)[42][43]. These layers are connected by low energy van der Waals type bonds. This explains the laminated morphology of graphite [42][43]. Graphite is characterized by high thermal and electrical conductivity, good chemical stability, and remarkable plasticity [43][44][45][46][47][48][49][50]. A good thermal and electrical conductivity is attributed to the delocalization of the π-electrons of the carbon atoms in graphite, and its plasticity can be explained by the possibility of sliding the sheets layers one onto the other [42][43]. These favorable characteristics make graphite interesting materials for improving the transfer and storage of thermal energy, for preparing anodes of lithium-ion batteries, and for electrochemical applications. In this context, Zhong et al. [51] used pitch-based graphite foams to increase the thermal diffusivity of paraffin wax for a thermal energy storage application. Later, Jana et al. [45] studied the effect of the addition of graphite on the conductivity of a tannin-based resin. They showed, contrary to what was expected a priori, that the smaller graphite particles were much more suitable for obtaining conductive matrices. Indeed, the use of small grains made the viscosity higher because of their higher surface and made it possible to obtain homogeneous foams with a higher density [45]. In 2019, Zhang et al. [52] showed that the use of graphitized mesoporous carbon as anode materials for lithium-ion batteries improved speed performance and had a good cycling stability with a reversible capacity of 248.3 mA h g−1 at 1 C after 100 cycles. In the same context, porous graphitic carbon was synthesized from Eichhornia crassipes plants  collected from the Coimbatore region, Tamilnadu-India, and has been used for the sustainable fabrication of hole-transporting materials electrode in perovskite solar cells [53]. 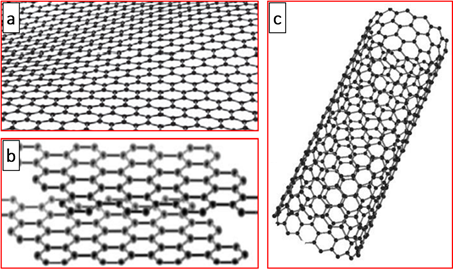 Figure 2. A conceptual model depicting the structure of graphene (a), graphite (b), and carbon nanotubes (c).

Carbon nanotubes are an allotropic form of carbon (Figure 2c), observed for the first time in 1991 by Japanese researcher Sumio Iijima during the synthesis of fullerenes by an electric arc [54]. They have been characterized as graphene sheets that are wound on themselves in the form of microtubes and will later be renamed multiwall carbon nanotubes (MWCNTs). In 1993, the synthesis of single-walled carbon nanotubes (SWCNTs) was reported by optimizing the method of synthesis by an electric arc [55][56]. The multisheet nanotubes consist of several graphene sheets wound concentrically with a spacing between two sheets of approximately 3.6 Å, slightly greater than the spacing between two sheets in graphite. The diameter of the nanotubes varies, depending on the number of sheets, from 1 to 50 nm, and their lengths can reach 1 µm [57][58][59]. SWCNTs consist of a graphene sheet wound on itself, and they form a tube whose diameter is between 0.4 and 3 nm. Carbon nanotubes are therefore composed of one or more sheets of carbon atoms, as in graphite, wound on themselves forming a tube. Carbon nanotubes have good mechanical properties, good adhesion, and excellent electrical conductivity [43,111–113]. Some of these nanotubes have metallic properties [75,114,115], while others are semiconductors [60][61][62][63][64][65]. SWCNTs and MWCNTs are manufactured by almost the same method; the only distinction can appear on the use of the metal catalyst, generally nickel, iron, or cobalt, which is essential for the synthesis of fullerenes. They can be prepared mainly by arc discharge, laser ablation, and chemical vapor deposition [66][67][68][69][70], involving one of the following as carbon precursors: xylene, acetylene, toluene, methane, benzene,etc. [43]. On the industrial level, carbon nanotubes, with the particularity that they possess, residing in a small amount of impurities, are used in many forms such as the reinforcing elements of polymers and composites, nanoporous materials for energy storage, passive (nanometric conductors) or active components (diodes and transistors), and systems allowing for the vectorization of drug molecules for the treatment of certain diseases [64][64][65][66][71][72][73][74][75][76].

More
© Text is available under the terms and conditions of the Creative Commons Attribution (CC BY) license; additional terms may apply. By using this site, you agree to the Terms and Conditions and Privacy Policy.
Upload a video for this entry
Information
Subjects: Polymer Science
Contributor MDPI registered users' name will be linked to their SciProfiles pages. To register with us, please refer to https://encyclopedia.pub/register :
Younes Moussaoui
View Times: 1149
Revisions: 2 times (View History)
Update Time: 29 Dec 2020
Table of Contents
1000/1000
Hot Most Recent