Submitted Successfully!
Thank you for your contribution! You can also upload a video entry related to this topic through the link below:
https://encyclopedia.pub/user/video_add?id=3448
Check Note
2000/2000
Photodynamic Therapy
Edit
Upload a video
This entry is adapted from 10.3390/radiation1010002

Photodynamic therapy (PDT) is a promising therapeutic strategy for cancers where surgery and radiotherapy cannot be effective. PDT relies on the photoactivation of photosensitizers, most of the time by lasers to produced reactive oxygen species and notably singlet oxygen. The major drawback of this strategy is the weak light penetration in the tissues. To overcome this issue, recent studies proposed to generate visible light in situ with radioactive isotopes emitting charged particles able to produce Cerenkov radiation. In vitro and preclinical results are appealing, but the existence of a true, lethal phototherapeutic effect is still controversial.

Photodynamic therapy (PDT) uses specific molecules, namely photosensitizing agents, photo-agents or photosensitizers (PS), along with light illumination, in the presence of oxygen, to kill cancer cells, ultimately leading to tumor eradication. PDT is also known as photoradiation therapy or photochemotherapy. PDT involves the presence of PS, light and endogenous molecular oxygen (3O2) to generate photochemical reactions. Over the past few decades, diverse synthesized PS activation by visible and near-infrared (NIR) light has been widely investigated [1]. The mechanism of PDT is based on type I and II photo-oxidation reactions. At a specific excitation wavelength (light photon absorption), the PS produces ROS causing oxidative cell damage which is highly dependent on the 3O2 content within the tissue [2].

Unfortunately, due to shallow visible light penetration depth into tissues, the photodynamic therapeutic strategy currently has largely been restricted to the treatment of surface localized tumors. Additional invasive strategies, i.e., interstitial PDT, through optical fibers are currently used for getting the visible light into the intended deep-seated targets [3][4]. Indeed, compared to ionizing-radiations, the light could not penetrate deeply because most tissue chromophores absorb in the range of the visible light spectrum commonly used in clinical practice. Moreover, the optimization of PDT modalities must consider numerous phenomena, regarding one or several main factors (photosensitizer, light, oxygen) involved in the treatment efficacy. A specific dosimetry remains challenging owing to their nonlinear interactions. Light penetration in the target tissue depends on its specific optical properties. If the tissue is hypoxic or becomes hypoxic because of the PDT treatment which consumes 3O2, the yield of singlet oxygen 1O2 will be lower than expected. Furthermore, making things tricky, PS concentration, light penetration and tissue oxygenation can vary during treatments and one parameter can influence the others.

To knock down the biotechnological barriers limiting the effectiveness of radiotherapy (i.e., curative X-ray dose to the tumor tissue without increasing it in the healthy adjoining tissue) and PDT (low penetration of the light), it has been proposed to use a bimodal therapy using biocompatible high-Z nanoparticles (NPs). This concept could combine both radiotherapy and PDT strategies, two clinical proven modalities, while maintaining the main benefits of each therapeutic strategy. Only PDT can generate 1O2, but unfortunately, the low penetration of light remains a limiting factor. To treat deep lesions without an invasive approach, X-ray could be used as an excitation source instead of normal light. This therapeutic approach is known as X-ray-induced PDT (X-PDT) [5][6][7][8][9]. The light penetration limitation in the tumor tissue will be overcome and PS activation within the tumor cells will be performed by radiotherapy. This methodology requires a material composition exhibiting appropriate physical properties: high density for a good ionizing radiation interaction, high scintillation quantum yield and efficient energy transfer toward the PS as well as a biocompatibility and adapted in vivo bio-distribution. However, most of the X-PDT studies were mainly obtained with cancer cell lines or animal models bearing subcutaneous grafted cancer cells, limiting therefore clinical relevance [10]. The potential toxicity of nanoscintillators, in fact, mostly relies on nanoparticles stability, which can be enhanced by an inorganic shell among other things. As an example, AGuIX-designed nanoplatforms which originally chelate gadolinium have been assessed in phase I and phase II clinical trials without evidence of any toxicity [11][12]. AGuIX nanoparticle being a chelator, Gd3+ cations can be easily replaced by another 3+ lanthanide.

Recently, another therapeutic strategy has been proposed, direct PS activation through Cerenkov radiation, referred as Cerenkov-induced PDT (CR-PDT) [13][14]. Ran et al., in their proof-of principle article, postulated that such a treatment could be a synergy between the radiotherapeutic and phototherapeutic effect, the latter involving solely PSs activation [15]. However, despite the various recent studies demonstrating a real benefit in terms of tumor growth decrease, there is still a debate about the presence of a cytotoxic phototherapeutic effect [16]. Indeed, the number of photons absorbed by the PS being lower than those involved in PDT, the amount of 1O2 produced is dramatically low.

Cerenkov light is a luminescence signal produced by charged particles. Two conditions must be present to enable such an effect: the medium must be dielectric and the charged particle must travel faster than the phase velocity of light in that medium. Cerenkov photons are produced by successive polarization/depolarization of the medium along the particle path, yielding constructive interferences [17]. To make it clearer, Cerenkov radiation can be compared with sound barrier crossing, but for light.

The Cerenkov photon yield can be computed with the Frank–Tamm formula [18]:

where dN/dx is the number of photons emitted per step length; n is the refractive index of the considered medium; α is a time constant defined as 1/137; and β is the ratio between the actual particle velocity and light speed in vacuum. Only particles, where βn > 1, will be able to produce Cerenkov light. β is directly related to the particle energy following the formula:

Thus, to allow Cerenkov radiation, the initial particle’s energy must be:

In biological tissues, where the refractive index is considered around 1.4, this energy threshold is around 250 keV. This threshold is much lower than most of the radionuclides emitting β+ or β− particles.

The Cerenkov spectrum is a continuous spectrum from UV to infra-red light where the number of photons per wavelength is proportional to 1/λ2. Cerenkov photons are not emitted isotropically from the particle, but within a cone aligned with the direction of the travelling particle. The cone aperture of the distribution (Figure 1) is related to the particle velocity as 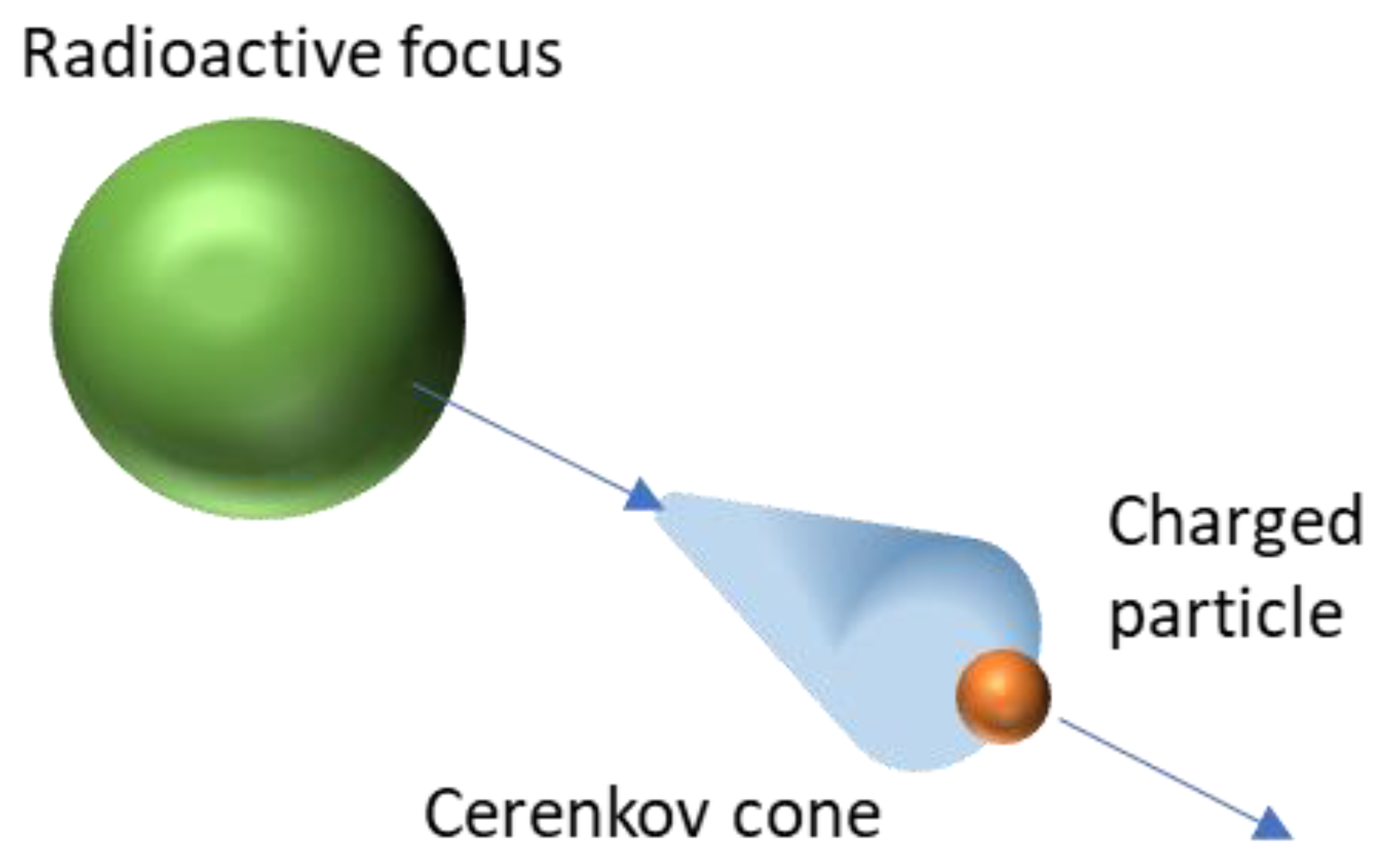 Figure 1. Illustration of Cerenkov effect in a dielectric medium. A charged particle is emitted from the radioactive focus. Its velocity in the medium is higher than light in that medium yielding Cerenkov light production in a cone. The cone orientation is colinear to particle trajectory and its aperture is defined by particle velocity. As the particle is faster than light, Cerenkov photons appear behind it.

Gill et al. highlighted the luminescence yield of several isotopes commonly used in nuclear medicine and biology [19]. They used simulations (including the true resolution of Franck–Tamm formula at each length step) to determine the quantity and spatial distribution of Cerenkov light for each assessed element. Moreover, they validated their simulation kernel by true experiments for five radionuclides covering energies from 0.611 up to 2.3 MeV. Table 1 summarizes the photon yield of the most common radionuclides used in nuclear medicine and Figure 2 presents the corresponding Cerenkov spectra for the same isotopes. It is noteworthy that most of them are dedicated to positron emission tomography. Monte Carlo simulations assessed the spatial distribution of Cerenkov photons in biological medium. Mitchell et al. computed the volume where the charged particles energy was still higher than the Cerenkov threshold, allowing for the conclusion that many β emitters produced Cerenkov light in a 2 mm-diameter sphere [18]. 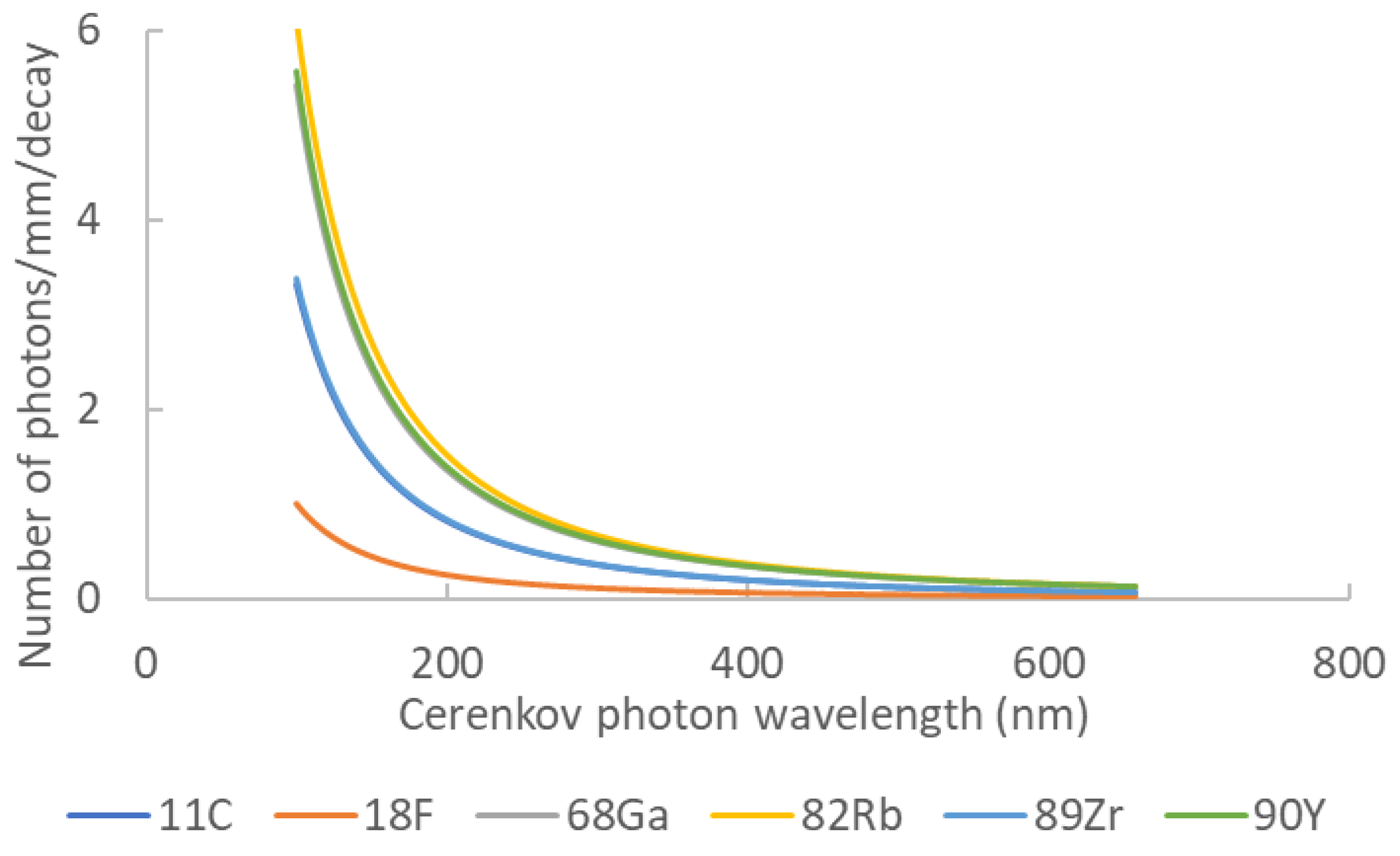 Figure 2. Cerenkov spectrum for 18F, 68Ga and 89Zr decay in biological medium. Spectra were defined between 100 and 650 nm. To ease reading, number of photons are expressed relatively to 18F at 100 nm.

More
© Text is available under the terms and conditions of the Creative Commons Attribution (CC BY) license; additional terms may apply. By using this site, you agree to the Terms and Conditions and Privacy Policy.
Upload a video for this entry
Information
Subjects: Engineering, Biomedical
Contributor MDPI registered users' name will be linked to their SciProfiles pages. To register with us, please refer to https://encyclopedia.pub/register :
Batoul Dhaini
View Times: 247
Revisions: 4 times (View History)
Update Time: 15 Dec 2020
Table of Contents
1000/1000
Hot Most Recent