+1 point
Thank you for your contribution! You can also upload a video entry related to this topic through the link below: https://encyclopedia.pub/user/video_add?id=31260
Check Note
2000/2000
Mining the Immunopeptidome for Antigenic Peptides in Cancer

Harnessing the immune system for cancer therapy has shown success, however the response to immunotherapy has been limited. Deciphering the immunopeptidome repertoire of cancer cells is crucial for identifying neoantigens. To date the emphasis has been on mutations. However, there is more to neoantigens than mutations. Thus, there is a need to identify other types of neoantigens that are commonly expressed in a cancer type that are presented by MHC class I and class II, to induce a cytotoxic CD8+ T and CD4+ T response, respectively. The immunopeptidome encompasses protein post-translation modifications (PTMs), which are overlooked by genome or transcriptome profiling. This entry covers how the immunopeptidome can yield novel cancer-specific antigens, focusing on PTMs and their applications.

Identifying novel antigens in cancer is highly relevant for immunotherapeutic applications including chimeric antigen receptor (CAR)-T and NK cell, pulsed-dendritic cell therapy, and therapeutic and preventative cancer vaccines [1]. Mass spectrometry provides an important means for deciphering the immunopeptidome repertoire of tumor cells [2]. Whereas much emphasis has been placed on mutations as a source of neoantigens, the occurrence of specific mutations in peptides bound to the major histocompatibility complex (MHC) is quite variable from patient to patient [3][4][5]. Thus, there is a need to identify antigenic peptides that are commonly expressed in a cancer type that are presented through MHC class I for activation of cytotoxic CD8+ T cells [6][7]. Moreover, there is also an emerging interest in immune peptides bound to MHC class II that induce a B cell response [8][9][10].
Since the early days of profiling the immunopeptidome using mass spectrometry (MS) some three decades ago [11], there has been substantial improvement in the overall approach, including the application of machine learning [12][13][14]. The detection and prediction of immunogenic peptides through genomic and transcriptomic data is challenging and overlooks protein aberrations that occur after transcription. These include translational errors, post-translational modifications (PTMs) and peptide splicing that can be uncovered through analysis of the immunopeptidome [15][16][17]. Remarkably, PTMs have been discovered to induce immunogenicity more than their unmodified counterparts. Prior studies by the researchers' group have identified citrullination as a source of immunogenicity in cancer [18]. Other notable PTMs include phosphorylation, acetylation, deamination, and glycosylation [19][20][21][22]. However, not all PTMs are stable and presented by MHC, given their enzymatic reversibility as in the case of acetylation [23].

2. The Immunopeptidome as a Source of Different Types of Neoantigens

The immunoediting concept has been critical for our understanding of the mechanisms through which the immune system responds to cancer and how tumor cells can evade the immune response [24]. A key factor in the immune response is the recognition of tumor antigens. T cells, through their TCRs, can interact with the myriad of peptides bound to MHC, sorting out self from non-self. Non-canonical tumor antigens, derived from sequences outside of exons or by alternate protein-processing mechanisms, are of increasing interest for immunotherapy [25]. PTMs are mediated by multiple enzymes, some of which may be dysregulated in tumor cells, rendering them potentially tumor specific. Post-translationally modified proteins undergo processing through the proteasome, resulting in peptides that bind to MHC-I for endogenous proteins or MHC-II for exogenous proteins [26]. Dendritic cells (DCs) are antigen-presenting cells (APCs) in cancer that are essential for T and B cell responses via immunopeptides and native protein presentation, respectively [27][28]. PTMs that are restricted to tumor cells have potential as a source of immunopeptides for immunotherapy.

3. Post-Translational Modifications as a Source of Tumor Antigens

Whereas a multitude of PTMs are known to occur, most have not been previously investigated in cancer. Nanoscale liquid chromatography coupled mass spectrometry (nanoLC-MS) has contributed significantly to the identification of PTMs in the immunopeptidome through matching the peptide parent mass (MS1) and the fragment mass (MS2) to sequences in the human genome database, allowing for mass shift due to modified amino acids (e.g., +0.984 Da on Arg) for citrullination; (+97.976 Da on Ser, Thr, and Tyr) for phosphorylation; and (+203.079 Da on Ser and Thr) for O-GlcNAc. PTMs that have been identified in the immunopeptidome with demonstrated immunogenicity in cancer (Figure 1). 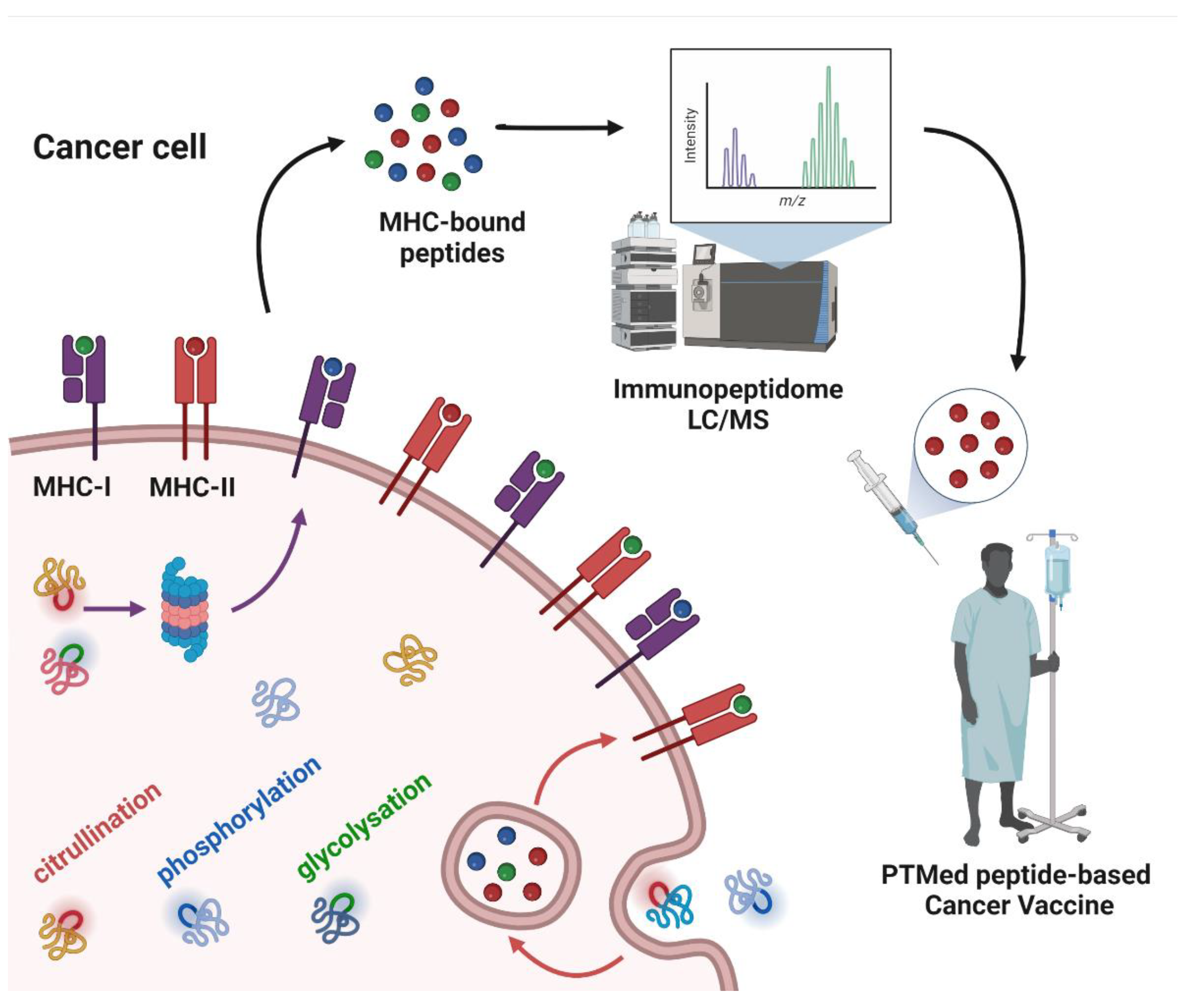 Figure 1. Post-translationally modified peptide-based cancer vaccine workflow. The figure depicts cancer cell antigen processing of intracellular and extracellular proteins, subsequently as peptides bound to MHC-I or MHC-II. Some of the proteins have PTMs in their structure, which are sketched in colors (citrullination: red; phosphorylation: blue; glycosylation: green) as well as in MHC-bound peptides. The MHC-bound peptides are identified by means of liquid chromatography-mass spectrometry (LC/MS), to derive the cancer cell immunopeptidome. From the immunopeptidome data, peptides with PTMs can be selected as antigens for cancer vaccines.

4. Peptide PTMs as a Source of Cancer Vaccines

Taking into account that the immunopeptidome represents the whole spectrum of peptides presented in a cell, there is a need to identify the most promising cancer targets. Thus, there is a need to determine the structure of an MHC-bound peptide and its level of expression for vaccine development. There are numerous ongoing clinical trials utilizing different antigens and adjuvants as therapeutic cancer vaccines. Focusing on peptides with PTMs as vaccines, promising findings have resulted from the use of citrullinated peptides (Table 1). A citrullinated VIM peptide has been utilized as an antigen in combination with an adjuvant induced IFN-γ and granzyme B-secreting CD4+ T cells. Citrullinated VIM-specific Th1 cells induced by the vaccine had a potent antitumor response against established skin and lung tumors, as well as a long-term memory response [29]. Similarly, a citrullinated ENO1 peptide-based vaccine elicited a potent citrulline-specific Th1 cell response in pancreatic, skin, and lung cancers [30]. Additionally, ENO1 is commonly overexpressed in different tumor types, including melanoma, pancreatic, breast, and lung cancer, thus citrullinated ENO1 peptides are plausible antigens for a wide cancer spectrum [18][30][31]. Furthermore, the combination of citrullinated VIM and ENO1 peptides in a vaccine, designated Modi-1, induced a significant antitumoral response in a mouse model of ovarian cancer. Importantly, a substantial citrulline-specific T cell response was observed in more than half of ovarian cancer patients [32]. Moreover, analysis of the melanoma immunopeptidome led to the identification of MHC-II-bound citrullinated peptides are derived from MMP21, Cp450, and GRI proteins [33]. A combination of these citrullinated peptides did not induce a greater antitumoral response than citrullinated MMP21 and GRI peptides individually, pointing to the potential of a reduced response with multiple peptides with different MHC-II binding specificities [33]. Another source of citrullinated peptides is the NPM protein. Vaccination with a PADI2-mediated-citrullinated NPM peptide induced an antitumoral response which was therapeutic, increasing survival and resulting in protection against a second tumor challenge in melanoma and lung cancer mouse models. Interestingly, PADI4-mediated-citrullination of NPM peptide did not elicit a citrulline-specific Th1 response, in contrast to PADI2-mediated-citrullination [34]. The CD4 responses observed may result from binding of citrullinated peptides primarily by MHC-II [18] in HLA-DP4 and HLA-DR4 transgenic mice. Nevertheless, the vaccine-induced CD4 response was sufficient to inhibit tumor progression, indicating the effectiveness of responses that do not involve CD8+ T cells [10].
Table 1. Summary of the post-translational modified peptides used in immunotherapy.
ACT: Adoptive Cell Therapy; DCTher: Dendritic Cell Therapy; ENO1: α-enolase 1; VIM: vimentin; MMP21: Matrix Metalloproteinase-21; GRI: Glutamate Receptor Ionotropic; NPM: Nucleophosmin; ISR2: Insulin Receptor Substrate 2; BCAR: Breast Cancer Antiestrogen Resistance 3; SKCM: Skin Cutaneous Melanoma; PAAD: Pancreatic Adenocarcinoma; PRAD: Prostate Adenocarcinoma; BRCA: Breast Invasive Carcinoma; LUAD: Lung Adenocarcinoma; OV: Ovarian Serous Cystadenocarcinoma; NA; Not Applicable.
There is a more limited number of studies utilizing phosphorylation as a PTM for peptide vaccines, although immunopeptidome analysis has pointed to a substantial number of phosphorylated peptides. Immunopeptidome analysis of melanoma, ovarian carcinoma, B lymphoblastoid, and leukemia resulted in the identification of a large number of phosphopeptides that were cancer specific with CD8 T cell antigen specificity in patients [43][44]. Some of the identified phosphopeptides were derived from ISR2, BCAR, TNS2, SELH, CDC25b, and beta-catenin [35][43][44], concordant with the identification of phosphorylated ISR2, TNS2, and SELH peptides in the colorectal cancer immunopeptidome [45].
As for glycopeptide-based cancer vaccines, an initial source was the glycosylated MUC protein displaying the Tn antigen. Immunization of mice with a desialylated ovine MUC with substantial representation of the Tn antigen elicited primarily a CD4+ T cell response specific to the Tn antigen. Conversely, immunization with a deglycosylated MUC did not induce an immune response [46]. The induction of an immune response specifically against the PTM protein suggests that glycosylation may be a useful source of cancer-specific antigens given the findings of aberrant glycosylation in many cancers, notably breast cancer [47][48]. A case in point is a fully synthetic cancer vaccine, a dendrimeric multiple antigenic glycopeptide displaying a trimer of Tn antigens (MAG-Tn3) associated with a promiscuous CD4 epitope, the tetanus toxoid-derived P2 peptide, that has been shown to induce an antitumoral Tn-specific T cell response in monkeys [47]. This MAG-Tn3 vaccine has been used in a phase I clinical trial for high-risk relapsed breast cancer patients (NCT02364492). Another cancer vaccine in clinical trial is based on MUC1 bearing Tn antigens (Tn-MUC1) pulsed with autologous DCs [39]. This phase I/II clinical trial follows the same strategy used in rhesus macaques, which resulted in five out of seven castrate-resistant prostate cancer patients having a CD4 and/or CD8 response (NCT00852007).
Given the complexity of glycan modifications, there has been a surge of various approaches to identify and develop glycopeptides as vaccines, as reviewed above, including the use of glyco-antigen microarrays to investigate immune responses to cancer vaccines [49][50]. Another development is the use of an antigen delivery system based on gold nanoparticles with Dectin-1 to target DC, conjugated with MHC-II glycopeptides. This gold nanoparticle glycopeptide vaccine elicited a strong humoral and cellular immune response in mice [51]. In all, much progress has been made in the identification of glycopeptides and their structural and other properties to enhance their effectiveness as cancer vaccines [52][53][54][55].

More
© Text is available under the terms and conditions of the Creative Commons Attribution (CC BY) license; additional terms may apply. By using this site, you agree to the Terms and Conditions and Privacy Policy.
Upload a video for this entry
Information
Subjects: Immunology; Biochemistry & Molecular Biology
Contributors MDPI registered users' name will be linked to their SciProfiles pages. To register with us, please refer to https://encyclopedia.pub/register :
Ricardo A. León-Letelier
,
Hiroyuki Katayama
,
Sam Hanash
View Times: 32
Revisions: 3 times (View History)
Update Time: 26 Oct 2022
Table of Contents
1000/1000
Hot Most Recent