+1 point
Thank you for your contribution! You can also upload a video entry related to this topic through the link below: https://encyclopedia.pub/user/video_add?id=29683
Check Note
2000/2000
Willardiine and Its Analogues

Willardiine was first identified by Rolf Gimelin in 1959 from the extracts of seeds of Acacia willardiana. Structurally it corresponds to (2S)-2-amino-3-(2,4-dioxopyrimidin-1-yl)propanoic acid (1) and carrying an uracil moiety it can be ascribed to the category of nucleoamino acids. Willardiine is synthesized by the single specific enzyme uracilylalanine synthase, and the N–heterocyclic moiety uracil obtained by the orotate pathway proved to be an effective bioisostere for the distal carboxyl group of L-glutamate. Different  aspects on both chemistry and biotechnological applications of willardine/willardine-analogues and nucleopeptides will be reviewed herein.

Willardiine was first identified by Rolf Gimelin in 1959 from the extracts of seeds of Acacia willardiana [1]. Structurally it corresponds to (2S)-2-amino-3-(2,4-dioxopyrimidin-1-yl)propanoic acid (1, Figure 1) and carrying an uracil moiety it can be ascribed to the category of nucleoamino acids [2][3][4]. Willardiine is synthesized by the single specific enzyme uracilylalanine synthase, and the N–heterocyclic moiety uracil obtained by the orotate pathway [5] proved to be an effective bioisostere for the distal carboxyl group of L-glutamate [6]. 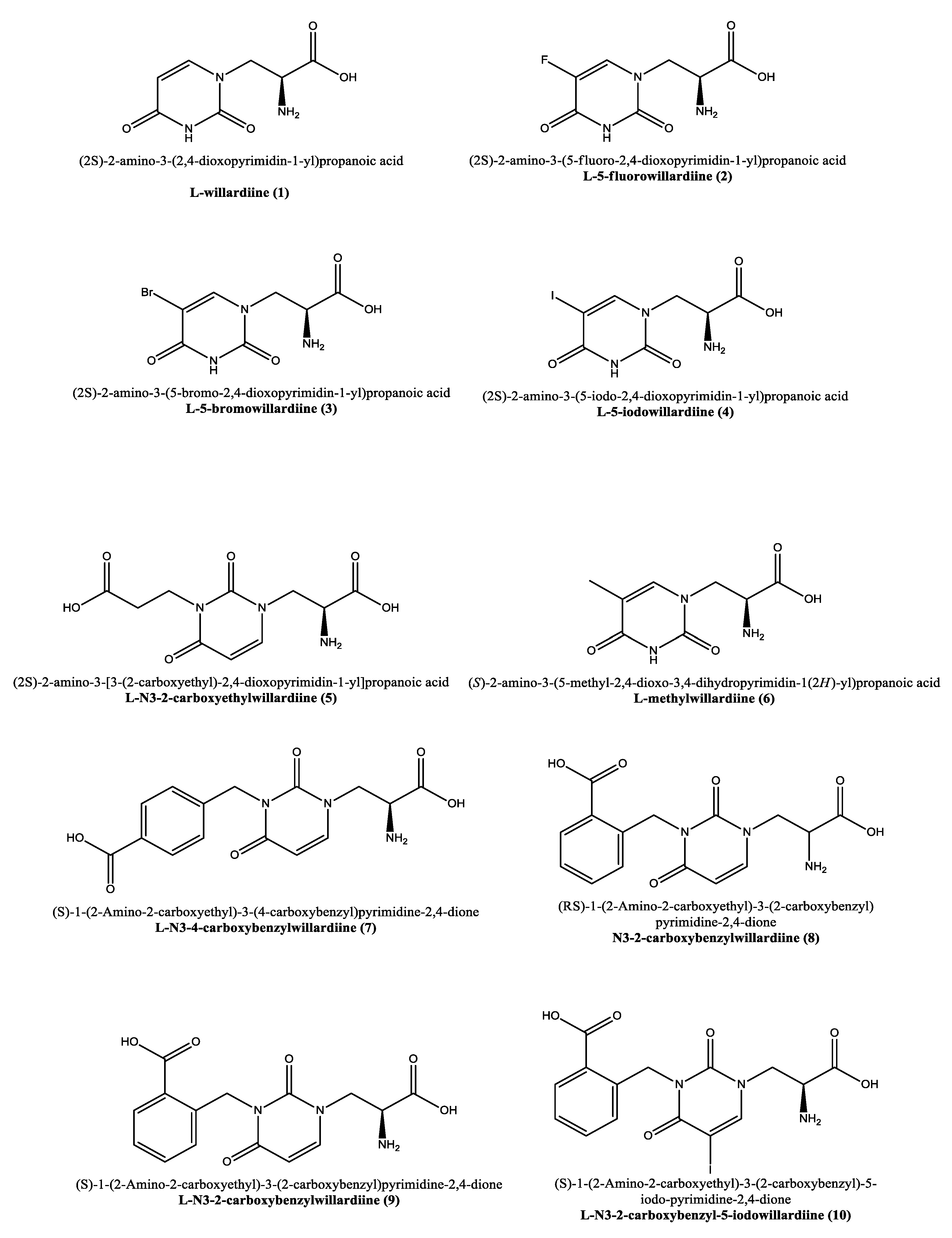 AMPA receptors are particularly implied in neurodegenerative disorders through their connection with synaptic plasticity, which plays a fundamental role in many physiological aspects of cognitive abilities but also in neural development [24]. Many neuropathies are associated with the cognitive decline, which in turn is linked to changes in AMPA-mediated plasticity [25][26]. In animal models of Parkinson’s disease, enhanced levels of AMPA receptors have been revealed in affected regions, while AMPA antagonists have been proposed as potential therapeutics. However, the benefits of inhibiting AMPA receptors with respect to curing the symptoms of Parkinson’s disease do not always justify the use of this strategy that can cause severe off-target effects [27][28]. On the other hand, AMPA receptor deficits have been correlated with Huntington’s disease, that causes the progressive degeneration of neural cells in the brain [29], as demonstrated in studies conducted in human postmortem tissues and animal models. In particular, modulating AMPA receptors in animal models led to a decrease of degeneration in both the striatum and memory deficits [27]. Moreover, genetic alterations leading to AMPA receptor GluA2 subunit defects were correlated with autism spectrum disorders [30]. The role of AMPA receptors in autism is also supported by the effectiveness of the pharmacological modulation of this type of receptors which rescued social impairments in animal models [31]. Among the many hypotheses about the biological basis of the major depressive disorder, the glutamate hypothesis was corroborated by the evidence that NMDA receptor antagonists blocking the activation of NMDA receptors, and thus causing the AMPA receptor activation to compensate for the decrease in glutamate signaling, have antidepressant effects in animal models [32]. Interestingly, AMPA receptors mediate also the dysregulated sleep, that is a major symptom of major depressive disorder [33].

As anticipated, willardiine is a partial agonist of ionotropic glutamate receptors [14] and specifically, agonizes non-NMDA glutamate receptors in particular activating the AMPA receptors [15][16][17]. In analogy to willardiine, its most common analogues are also agonists of kainate/AMPA receptors. The addition of a halogen to the uracil moiety affects the binding affinities and stability of the analogues that are generally more stable than 1 and show higher binding affinity for AMPA receptors. Extensive research has been conducted on the 5-fluorowillardiine (2, Figure 1) that showed limited effects at the kainate receptor but acted as a selective agonist of the AMPA receptor and is widely employed in vitro to selectively stimulate AMPA receptors [40][41][42][43][44][45][46]. The activity of the halogen-based analogues 2–4 (Figure 1) at AMPA/kainate receptors was also assayed using mouse embryonic hippocampal neurons [40]. In particular, 5-bromowillardiine (3) acted as a potent agonist, and led to rapid but incomplete desensitizing responses. As for the 5-iodowillardiine (4) it resulted a selective kainate receptor agonist [47]. On the other hand, 2 with an 1.5 µM EC50 was seven times more potent than AMPA (EC50 = 11 µM) and 30 times more potent than 1 (EC50 = 45 µM); as for the potency sequence within the explored halogen derivatives the observed trend was F(2) > Br(3) > I(4) > willardiine (1, Table 1) [40].
Table 1. Steady-state EC50 1 for AMPA/kainate receptor activation by willardiines.
1 adapted from data reported in [40].
Moreover, cross-desensitization experiments revealed that halogen-bearing willardiines bind with different affinity to desensitized receptors that are the same receptors activated by kainate and AMPA, and the rapidly desensitizing and equilibrium responses to the analogues under investigation were mediated by the same receptors. However, they produced different degrees of desensitization with the desensitization sequence being F(2) > willardiine (1) > Br(3) > I(4). More in detail, the Iodine-containing derivative (4) blocked the activation of the desensitizing response elicited by 1 and 2, while 1 and 2 blocked the equilibrium response to 4. It was possible to conclude that simple changes in the molecular structure of willardiine can lead to marked differences in the ability of agonists to produce desensitization of AMPA/kainate receptors [40].
The thermodynamics connected with the interaction of willardiine and its analogues with the ionotropic receptors was studied in order to obtain useful insights exploitable for new drug design [36]. For example, analogues of willardiine modified at position 5 with F, Cl, I, H and NO2 led to deeper insights on the thermodynamics of the interaction of willardiine with AMPA receptors [48]. The binding of willardiine analogues to subtypes of the AMPA receptor was, in some cases, driven by increases in entropy. The major part of the studied analogues were partial agonists whose charged state was found in direct connection with the enthalpic contribution to the interaction [36]. In particular, the binding of the charged forms to AMPA receptor is driven essentially by enthalpy, while the interaction of the uncharged form is largely dominated by the entropic contribution due to changes in the hydrogen-bonding network within the binding site, with these findings providing clues for further neurodrug development [36].
Interestingly, the carboxyethyl derivative of willardiine (5) was found to act as antagonist of the AMPA receptor and more in detail, the crystal structure of the GluR2 binding domain of this receptor, which is crucial for mediating its calcium permeability, in complex with 5 was described in the literature (Figure 2a,b) [49].

Figure 2. (a) 3D view of the crystal structure of the complex between the binding domain of the AMPA subunit GluR2 and 5 (PDB DOI: 10.2210/pdb3H03/pdb PDB ID: 3H03 https://www.rcsb.org/3d-sequence/3H03?assemblyId=1, accessed on 29 August 2022); (b) Detailed view of the ligand interaction in the same complex (for more details on protein residues involved in the binding see the link https://www.rcsb.org/3d-view/3H03?preset=ligandInteraction&label_asym_id=E, accessed on 29 August 2022). Note how the amino acid COOH forms a double H-bond with Arg93, while the ethyl COOH forms H-bonds with Tyr187 and Thr171.
This compound binds to one lobe of the protein with interactions similar to agonists, while the binding with the second lobe produces a stable lobe orientation that is similar to the apo state. The carboxyethyl substituent in the N(3) position of 5 keeps the protein lobes separated and the internal dynamics are minimal compared to the protein bound to the reference antagonist 6-cyano-7-nitroquinoxaline-2,3-dione, which minimizes the contacts with one of the two lobes. This latter complex is less stable than that observed with 5 despite a 100-fold higher affinity [43]. Overall, the study with 5 suggests that the antagonism of willardiine analogues is associated with the overall orientation of the lobes of the AMPA receptor rather than with specific interactions [43]. Another study [23] conducted on a range of novel willardiine analogues as antagonists acting at AMPA and kainate receptors suggested that for a derivative to act as AMPA/kainate receptor antagonist, an N3-substituent bearing a carboxylic acid (like in 5) side-chain is needed, the S-stereochemistry should be present in the derivative and a iodine added to the 5-position of the uracil moiety enhances antagonism at kainate receptors. Moreover, in the same study the 3-methyl analogue 6 (Figure 1), was found to be a weak agonist, indicating that merely blocking ionisation of the uracil ring of willardiine even though decreases the agonist activity is not sufficient to convert the analogue into an antagonist [23]. Aiming at developing new antagonists of kainate/AMPA receptors also N3-carboxybenzyl substituted willardiine analogues were synthesized [47]. The N3-4-carboxybenzyl derivative (7) proved to be equipotent at AMPA and kainate receptors in the rat spinal cord. The racemic N3-2-carboxybenzyl analogue (8) was found to be a potent and selective kainate receptor antagonist in experiments conducted on native rat and human recombinant kainate and AMPA receptors. More in detail, the kainate receptor antagonist activity was de[1]monstrated to reside essentially in the S enantiomer (9). 5-Iodo substitution of the uracil ring of 9 gave 10, which proved to have enhanced selectivity and potency for the kainate receptor [47].

More
© Text is available under the terms and conditions of the Creative Commons Attribution (CC BY) license; additional terms may apply. By using this site, you agree to the Terms and Conditions and Privacy Policy.
Upload a video for this entry
Information
Subjects: Biochemical Research Methods
Contributors MDPI registered users' name will be linked to their SciProfiles pages. To register with us, please refer to https://encyclopedia.pub/register :
Rosanna Palumbo
,
Daniela Omodei
,
Caterina Vicidomini
,
Giovanni N. Roviello
View Times: 144
Entry Collection: Peptides for Health Benefits
Revisions: 2 times (View History)
Update Date: 18 Oct 2022
Table of Contents
1000/1000
Hot Most Recent