+1 point
Thank you for your contribution! You can also upload a video entry related to this topic through the link below: https://encyclopedia.pub/user/video_add?id=27138
Check Note
2000/2000
Microbiota and Oral Cancer

A complex balanced equilibrium of the bacterial ecosystems exists in the oral cavity that can be altered by tobacco smoking, psychological stressors, bad dietary habit, and chronic periodontitis. Oral dysbiosis can promote the onset and progression of oral squamous cell carcinoma (OSCC) through the release of toxins and bacterial metabolites, stimulating local and systemic inflammation, and altering the host immune response. During the process of carcinogenesis, the composition of the bacterial community changes qualitatively and quantitatively. Bacterial profiles are characterized by targeted sequencing of the 16S rRNA gene in tissue and saliva samples in patients with OSCC. The human microbiota may determine the response to cancer therapy through different mechanisms, and thus may positively or negatively influence the outcome.

The interspecies and host-microbial interactions can be included in the holistic framework of holobiont, which accounts for the host and its obligate or facultative symbionts, whose dynamic interconnectedness entails emergent interactions and outcomes [1]. Despite the fact that the notorious 10:1 ratio of bacterial/human cells has been revised to the estimate of about 1.3:1 in a “reference man”, with about 38 × 1012 total bacteria in the human body [2], the biological role of the microbiota has not scaled down. The number of bacteria in the mouth is less than 1% of the colon bacteria number; however, bacterial concentrations in the saliva and dental plaque are high (about 109 and 1011, bacteria per mL content, respectively) [2]. Comprehensive information about the bacterial species present in the oral cavity is publicly available (Expanded Human Oral Microbiome Database (EHOMD), n.d.). Multi-omics approaches are currently available to study the complexity of polymicrobial environments, interspecies interactions and the mechanisms underlying these relationships [3].
Changes in microbial biomass in the oral cavity depend on the interaction between different microbial species in the biofilm. The oral biofilm matures through interactions between early colonizing microorganisms with later colonizers through several mechanisms, including coagulation, metabolic exchange, small-molecule signal-mediated communication, and exchange of genetic material. The numerous bacteria in the oral cavity are not uniformly distributed over all surfaces but proliferate differently in ecological niches depending on their metabolism in a healthy oral cavity [4].
Multiple oral anatomical sites influence the ecology of these habitats and create microbial environmental differences (Figure 1). The most abundant species of buccal epithelium were Streptococcus, Gemella, Eubacterium, Selenomonas, Veillonella, Actinomyces, Atopobium, Rothia, Neisseria, Eikenella, Campylobacter, Porphyromonas, Prevotella, Granulicatella, Capnocytophaga, Fusobacterium, Leptotrichia, Streptococcus mitis, Granulicatella adiacens, often considered an opportunistic pathogen, was detected from bacteremia/septicemia in patients with infective endocarditis/atheroma [5] but also at buccal sites in the healthy oral cavity.
On the tongue dorsum between keratinized papillae filiformis there were species of Streptococcus mitis, Streptococcus australis, Streptococcus parasanguinis, Streptococcus salivarius, Streptococcus sp. clone FP015, and Streptococcus sp. clone FN051, Granulicatella adiacens, and Veillonella spp. Anatomical differences of the dorsum of the tongue from the lateral margin influenced the bacterial profiles above. The lateral margin of the tongue has a smooth nonkeratinized surface, and the predominant bacteria were Streptococcus mitis, Streptococcus mitis bv. 2, Streptococcus sp. clone DP009, Streptococcus sp. clone FN051, Streptococcus australis, Granulicatella adiacens, Gemella haemolysans, and Veillonella spp. [6][7]. The tongue species most associated with health were Streptococcus salivarius, Rothia mucilaginosa (Stomatococcus mucilaginosus), and an uncharacterized, cultivable species of Eubacterium (strain FTB41) [8].
Likewise, the main bacterial species were Streptococcus mitis, Streptococcus mitis biovar 2, Streptococcus sp. clone FN051, Streptococcus infantis, Granulicatella elegans, G. hemolysans, and Neisseria subflava on the hard palate. Streptococcus mitis was the most commonly found species in essentially all healthy sites and subjects. However, both S. mitis and Streptococcus oralis have been associated with bacterial endocarditis in patients with prosthetic valves [9][10]. In addition to the distinctive bacteria of a healthy oral cavity there were bacteria associated with periodontal disease, such as Porphyromonas gingivalis, Tannerella forsythia, and Treponema denticola [11]. 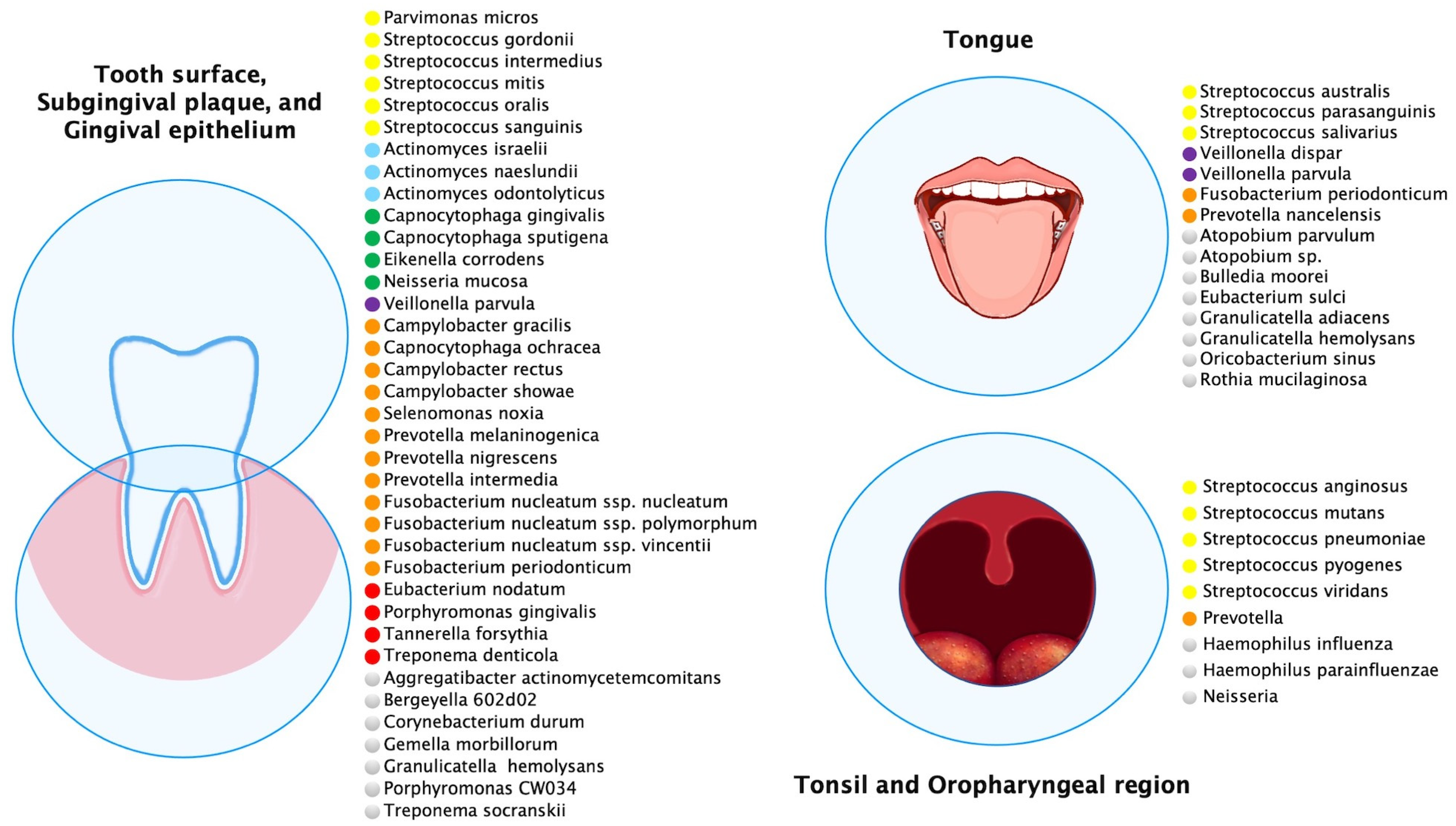 2. Microbiota and Inflammation in The Oral Cavity