+1 point
Thank you for your contribution! You can also upload a video entry related to this topic through the link below: https://encyclopedia.pub/user/video_add?id=26637
Check Note
2000/2000
DNA Methyltransferases

DNA methylation is an epigenetic mark that living beings have used in different environments. The MTases family catalyzes DNA methylation. This process is conserved from archaea to eukaryotes, from fertilization to every stage of development, and from the early stages of cancer to metastasis. The family of DNMTs has been classified into DNMT1, DNMT2, and DNMT3. Each DNMT has been duplicated or deleted, having consequences on DNMT structure and cellular function, resulting in a conserved evolutionary reaction of DNA methylation. DNMTs are conserved in the five kingdoms of life: bacteria, protists, fungi, plants, and animals.

1. The Structure of DNA Methyltransferases

DNA methyltransferases (MTases) are conserved in living beings acting in orchestra with other epigenetic players. They have positioned themselves with a few exceptions as the main transcription regulators. MTases are a group with methyltransferase activity; they have evolved in different orthologs, but all have the methyltransferase domain and a DNA target recognition domain. Living beings have conserved MTases to survive the different and dynamic ambient conditions [1][2][3][4][5].
The reaction mechanism of MTases catalyzes DNA methylation in adenine or cytosine bases is known. All MTases interact with the cofactor S-adenosyl methionine (AdoMet) to transfer a methyl group and produce S-adenosyl-l-homocysteine (AdoHcy) and methylated DNA [6]. Moreover, another characteristic of all MTases is that they have three protein domains (in the carboxy-terminal domain for DNMTs): The adoMet binding domain, which interacts with AdoMet to obtain the methyl group; a target recognition domain (TRD), which recognize a short sequence of DNA to be targeted for methylation, and the catalytic domain, which transfers a methyl group to AdoMet to the targeted nucleotide [6] (Figure 1). These domains are the set of MTases, which beings have conserved in almost all species of living beings. 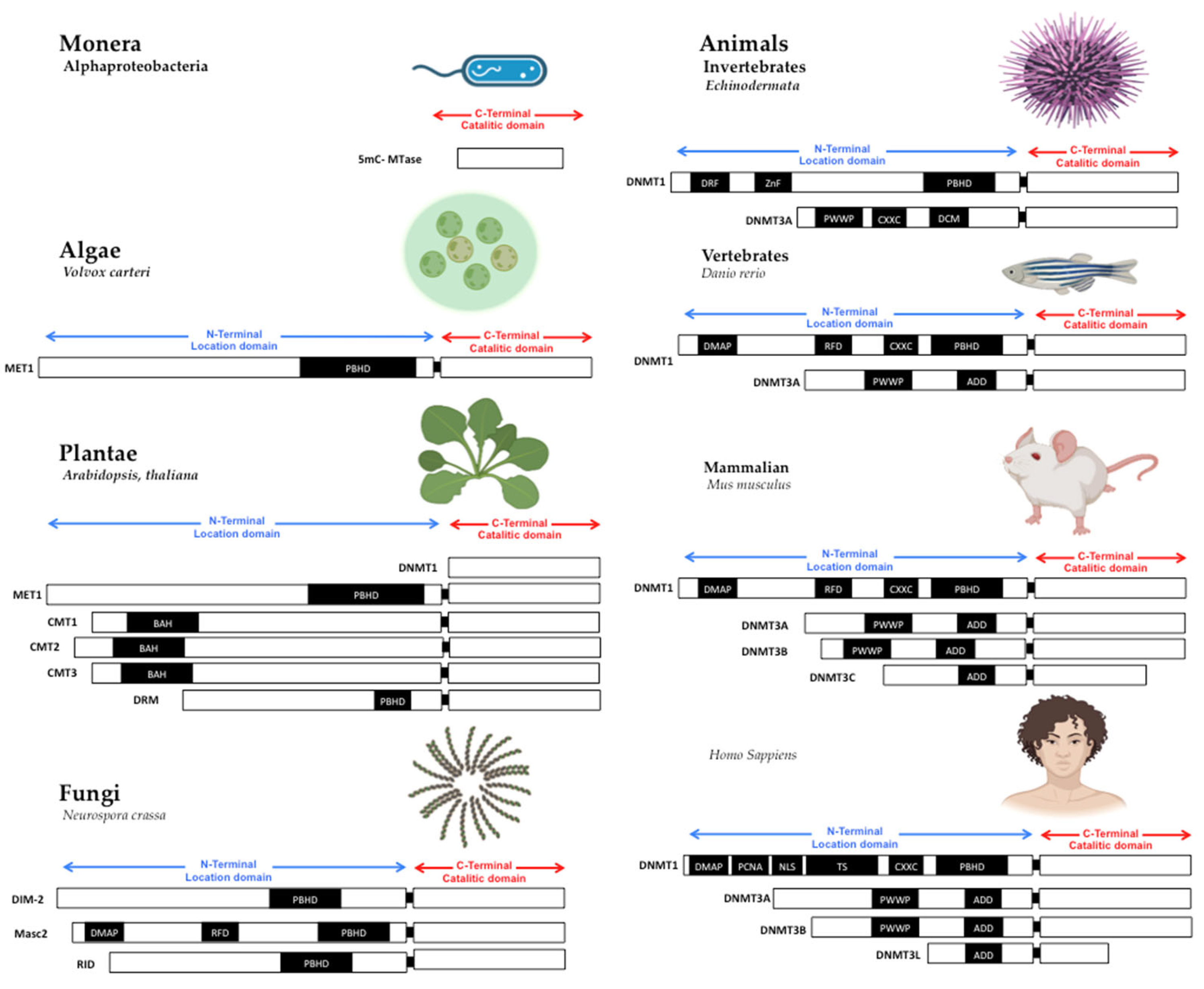 Figure 1. Structure of DNA methyltransferases. The DNMTs family is the DNA methylator in living beings. DNMTs have two domains: catalytic domain in the carboxy-terminal extreme, with the conserved catalytic motives, and location domain in the amino-terminal extreme, with the location and interaction chromatin motives. Monera has the catalytic domain mtase, Alphaproteobacteria. Protists and Algae are composed of MET1, CMT3, and DRM2 protein paralogs; MET1 is an example present in Volvox carteri. Fungi are composed of the protein paralogs: DIM-2, Masc1 and 2, and RID; the example is Neurospora crassa. In animals, Invertebrates, the protein paralogs are DNMT1 and DNMT3, in Echinoderma; Vertebrates, Fishes, DNMT1, and 3, zebrafish has 8 DNMT3 mammalians, the protein paralogs are: DNMT1 and DNMT3A/B/C in Mus musculus, and DNMT1, 3A/B/L in Homo sapiens. Abbreviatures: CD (chromo dominio), DMAP-1, binding domain (DMAP); motif to interact with PCNA (PCDNA); Nuclear localization Signal (NLS); Targeted Site (TS); Motif to Cys-X-X-Cys amino-acids, with zinc fingers (CXXC), Protein Binding Homeo Domain (PBHD); the motif of interaction with pro-trp-trp-pro (PWWP), and ATRX, DNMT3, DNMT3L domain (ADD). Note: Created with Biorender.com, accessed on 21 July 2022.
The primary sequence of MTases is essential to methyltransferase activity, but the shape is also crucial. The structural conformation domains and different motifs of MTases have been reviewed in other works [7][8], where domain or domains conformed MTases in all cases. First, in the amino-terminal domain, some motifs interact with CpG sequences as the CXXC domain in DNMT1 [9][10][11]. Still, without the CXXC motif, DNMT1 can’t actively interact with the PCNA motive to serve in DNA replication [12][13]; the PWWP motif in DNMT3A and DNMT3B, which interacts with chromatin proteins and localizes them in centromeric and pericentromeric chromatin [14][15]. The shape and the amino acid primary sequences of MTases are essential to be conserved in the catalytic domain in all living beings. The variable part on TRD is also evolving to give specificity to DNMTs duplications [13].

2. DNA Methyltransferases Are Regulated by Chemical Compounds and ncRNAs

The dysregulation of DNA methylation has a role in the development of cancer cells and other diseases [8][16]. As DNA methylation is a critical factor in global epigenetic regulation [17], it is not surprising to find DNMTs dysregulated in cancer. Actually, one of the main epigenetic characteristics in cancer is the global demethylation and local hypermethylation of the DNA [18]. There are multiple examples of how different tumors have either a misregulation of one or more DNMTs or even mutations. For example, hematological diseases like acute myeloid leukemia (AML) have mutations in the DNMT3A gene [19], whereas inactivating mutations in DNMT1 are related to genome-wide alterations of DNA methylation in colon cancer [20] (Figure 2). Different regulators of DNMTs have been researched, such as non-coding RNAs (ncRNA) and artificial compounds tested to influence DNA methylation. Targeting DNMTs is a promising tool to use alone or in combination to treat cancer. However, further research needs to be done in this field. 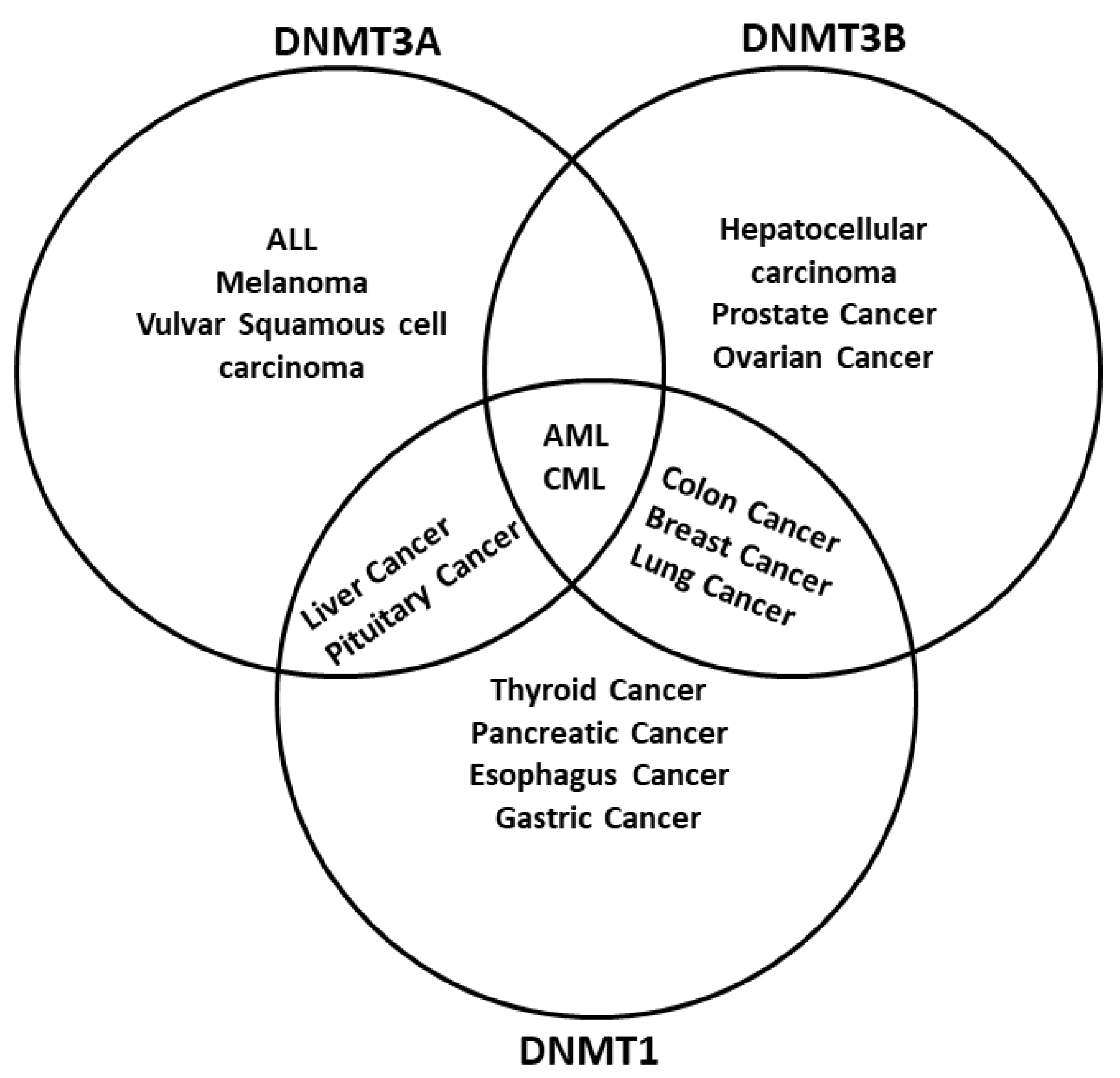 Figure 2. DNA methyltransferases are altered in cancer. DNMTs have a role in genomic regulation. In cancer, DNMTs are affected in expression level. In acute myeloid leukemia (AML) and chronic myeloid leukemia (CML), The three DNMTs are overexpressed. DNMT1 and DNMT3A have been described as affected in liver cancer and pituitary cancer, while DNMT1 and DNMT3B are overexpressed in breast cancer, colon cancer, and lung cancer; DNMT3B is deregulated in colon cancer and prostate cancer, and DNMT1 is deregulated in the pancreas cancer and esophagus cancer. In other cases, only one DNMT is overexpressed; however, only one DNMT could be enough to result in cancer development, progression, and metastasis. Abbreviatures: Myelodysplastic syndrome (MDS), chronic myelomonocytic leukemia (CMML), acute lymphoblastic leukemia (ALL), melanoma.
There are still only a few epigenetic drugs approved to treat cancer. One of the biggest challenges nowadays for clinical chemical treatments is to have greater efficiency, stability, and minimal adverse effects; the development of oligonucleotides and the discovery and synthesis of new drugs capable of inhibiting the expression of the DNMTs are becoming more used, and useful tool. The FDA has approved only two nucleoside analogs: 5-Azacytidine (Aza) and 5-aza-2′-deoxycytidine (DAC or decitabine). These compounds are used for treating myeloid dysplastic syndrome (MDS) and acute myeloid leukemia (AML) [21][22][23]. However, other molecules are currently being tested as possible therapy drugs in pre-clinical studies, like zebularine, a nucleoside analog more stable than Aza and DAC [24]. More recently, the second generation of decitabine and deoxyguanosine has been launched: Guadecitabine or SGI-110, which has proved to have a longer half-time thanks to being less prompt to deamination [25][26]. The DNMT inhibitor 5-fluoro-2′-deoxycytidine (FdCyd) has shown promising results in clinical trials. [21][22].
More recently, a series of new quinoline-based inhibitors have been discovered. These belong to the non-nucleoside inhibitors, the first of them is SGI-1027 [27], from which two other analogs have been described: MC3343 [27] and MC3353 [28]. For a more detailed revision of other molecules being studied as inhibitors of DNMTs, revise Hu et al., 2021 [29]. Until now, novel therapies do not only include DNMTs inhibitors but are also looking forward to including immunotherapy and HDACs inhibitors [30].
On the other hand, it has been reported that ncRNAs, which comprise small interfering RNAs (siRNAs), microRNAs (miRNAs), and long non-coding RNAs (lncRNAs), are capable of inhibiting DNMTs (Table 1). Firstly, siRNAs and miRNAs are small ncRNAs (siRNAs are 21–23 nucleotides, and miRNAs are 19–25 nucleotides) that silence gene expression at the post-transcriptional level by targeting the messenger RNA (mRNA). Secondly, lncRNAs have a size of more than 200 nucleotides, and they have a role in regulating gene expression at transcriptional and post-transcriptional levels [31]. Several examples of these molecules have been reported, such as MG98, a siRNA inhibitor of DNMT1. This has been employed in phases one and two of clinical trials with mixed results [32][33][34], suggesting that more research is needed to find the proper working doses, or even adequate combinations, to ensure better performance.
Table 1. Studies of DNA methyltransferases (DNMTs) and non-coding RNAs in cancer.
On the same line, miR29b is a miRNA that targets DNMT3A, and DNMT3B is downregulated in cancer of lymphoma and cancer of the pancreas [43][44]. In pancreatic cancer, it was shown that the expression of mir29b was downregulated; meanwhile, DNMT3b was enhanced. miR-29b overexpression caused a decrease in cell viability and promoted apoptosis by targeting DNMT3b. Meanwhile, in acute myeloid leukemia, the ectopic expression of miR-29b caused a reduced expression of DNMT3A and DNMT3B at both RNA and protein levels. This was because these DNMTs are direct targets of miR-29b [44]. In addition, miR-145 targets DNMT3A in ovarian carcinoma. The knockdown of DNMT3A decreases DNA methylation in the promoter of miR-145. This increased expression of miR-145 further downregulates DNMT3A, which is a double-negative feedback loop [41]. In bladder cancer, the lncRNA DBCCR1-003 directly interacted with DNMT1, preventing it from methylating the promoter region of the tumor suppressor gene DBCCR1 [35]. In AML, it has been reported that when CCDC26 (a lncRNA that interacts with DNMT1) is lost, DNMT1 is mislocalized to the cytoplasm, turn causes the hypomethylation of the DNA [46]. Other lncRNAs that interact with DNMT1 and affect methylation are DACOR1 in colon cancer [47] and HOXD-AS1 in lung adenocarcinoma [48]. linc-POU3F3 also downregulates the expression of DNMTs in esophageal squamous carcinoma [36]. Although all of these molecules are potential tools in cancer treatments, only MG98 and miR-29b have been tested as therapy inhibitors of the DNMTs and further research needs to be done. However, it is useful to know that DNMTs also have ncRNAs to regulate them more specifically.
Cancer cell development has been associated with epigenetic alterations, and DNMTs are one of the main actors in transcription regulatory processes. DNMTs are regulated by several mechanisms as ncRNAs and deregulation of DNMTs have been found in cancer. These deregulations have been reported in several types of cancer in a combinatorial manner. That is why the regulatory mechanisms of DNMTs are important in the cancer study. However, studying not only the mechanism of action of the DNMTs but also their broad diversity in organisms and how they have evolved in time allows us to understand better how they are regulated and predict the consequences of mutations and deregulations. Furthermore, manipulating DNMTs expression could be of great importance to knowing the drugs and the different ncRNAs that can help regulate them in cancer cells.

More
© Text is available under the terms and conditions of the Creative Commons Attribution (CC BY) license; additional terms may apply. By using this site, you agree to the Terms and Conditions and Privacy Policy.
Upload a video for this entry
Information
Subjects: Biochemistry & Molecular Biology
Contributors MDPI registered users' name will be linked to their SciProfiles pages. To register with us, please refer to https://encyclopedia.pub/register :
Victor M. Del Castillo Falconi
,
Karla Torres-Arciga
,
Genaro Matus-Ortega
,
José Díaz-Chávez
,
Luis A. Herrera
View Times: 184
Revisions: 3 times (View History)
Update Date: 30 Aug 2022
Table of Contents
1000/1000
Hot Most Recent