+1 point
Thank you for your contribution! You can also upload a video entry related to this topic through the link below: https://encyclopedia.pub/user/video_add?id=26139
Check Note
2000/2000
Ultrasonic Microbubble Cavitation in Tumor Therapy

Chemotherapy has an essential role not only in advanced solid tumor therapy intervention but also in society’s health at large. Chemoresistance, however, seriously restricts the efficiency and sensitivity of chemotherapeutic agents, representing a significant threat to patients’ quality of life and life expectancy. How to reverse chemoresistance, improve efficacy sensitization response, and reduce adverse side effects need to be tackled urgently. Consequently, studies on the effect of ultrasonic microbubble cavitation on enhanced permeability and retention (EPR) have attracted the attention of researchers. Compared with the traditional targeted drug delivery regimen, the microbubble cavitation effect, which can be used to enhance the EPR effect, has the advantages of less trauma, low cost, and good sensitization effect, and has significant application prospects.

The ultrasound-mediated microbubble cavitation effect refers to a series of dynamic processes such as expansion, contraction, oscillation, and violent collapse in tiny bubbles under ultrasound sonication at a specific frequency [1][2][3]. The physical phenomena with high temperature, high pressure, and micro-jet are induced by rapid release of instantaneous energy accompanying ultrasound intervention in bubbles after energy absorption [4][5]. The acoustic cavitation effect is commonly used to improve cancer therapy including but not limited to hepatocellular carcinoma, colon cancer, brain cancers, and prostate cancer in medical research [6][7][8]9]. When ultrasound is applied to the current and emerging technique on diagnosis and treatment, the cavitation effect can improve EPR in terms of both drug release and biological effects. During the process of agent release, ultrasound can stimulate the carrier to enhance the efficiency of drug release and distribution in tissues. In terms of biological effects, the use of acoustic energy combined with the cavitation effect of microbubbles is mainly to promote the vascular permeability and extracellular material transport by membranes in tumor microenvironment (TME) [9][10][11]. Meanwhile, when exposed to an ultrasound field, the liquid around the microbubbles will form acoustic streaming, in which the shear stress generated by the streaming can promote the directional release of the drug from microbubbles and enhance the permeability of the drug in tissues and cell membranes (shear-induced permeability) [10]. These mechanical effects primarily generated by ultrasound may lead to the improvement in permeability and vascular perfusion into solid tumor tissues [12].

Microbubbles are composed of less than 100 nm layers of polymers, proteins, and lipids covering the surface of a hydrophobic fluorinated gas. To increase tumor tissue specificity, ligands for specific cell surface receptors can be attached to the micro-vesicles. Microbubbles can present distinct oscillation patterns when acoustic parameters are varied. The hydrophobic microbubbles encapsulated by lipid, protein, or polymer shell gas are irradiated by ultrasound to expand, contract, oscillate, and even violently collapse, a process called cavitation. Cavitation can be divided into two forms, namely steady-state cavitation and inertial cavitation. Steady-state cavitation refers to the stable vibration of microbubbles around the resonant diameter at low sound intensities. The stable ultrasonic cavitation effect of microbubbles is usually generated under relatively low peak negative acoustic pressures. When the acoustic pressure amplitudes were further increased, ultrasonic cavitation turned into a violent collapse called inertial cavitation accompanied by shock waves and microstreaming [13]15]. These effects of cavitation have been extensively applied in various domains of medical applications [14][15][16][17]. Ultrasound-mediated microbubble cavitation can enhance EPR by improving the permeability of the biological barriers in TME through a local controllable cavitation effect, enhance material exchange and transport, and achieve the therapeutic effect of increasing drug concentration in tissue cells (Figure 1). In recent decades, numerous studies have demonstrated that ultrasound-mediated cavitation of microbubbles can facilitate the delivery of anticancer drugs to tumor cells [18][19]. Due to the sound pressure of ultrasonic waves, the microbubbles will shrink and expand periodically. When the sound pressure reaches a certain threshold, the microbubble collapses [20]. The cavitation or explosion of microbubbles will form temporary holes in the cell membrane and blood vessel wall to enhance permeability, providing temporary and reversible channels for the transport of substances, so that therapy agents can enter the cell passively [21][22]. Xia et al. used an orthotopic prostate cancer model with acoustic cavitation to induce an increase in the therapeutic efficacy of prostate cancer by increasing membrane permeability of prostate cancer cells and facilitating the targeted delivery of immune checkpoint inhibitors to tumors in the tumor microenvironment [23]. Studies have shown that ultrasound could not only enhance the passive diffusion of drug, but also affect the active transport for enhancing drug uptake. Ultrasound cavitation is thought to induce changes in ion channels and molecular reaction including membrane resealing or gap restoration in different spatial and temporal scales, resulting in increased intracellular Ca2+ concentration and cytoskeletal rearrangement [24]. These changes discussed above could play a crucial role in stimulating the clathrin-mediated endocytosis pathway to promote drug diffusion into cells [25]. In addition, fluid movement caused by cavitation may also facilitate vascular perfusion according to vasodilator expression including nitric oxide induced by increased intracellular Ca2+ concentration and high shear stress from oscillating bubbles, increasing the amount of drug agent uptake by distant tumor cells [25][26][27]. 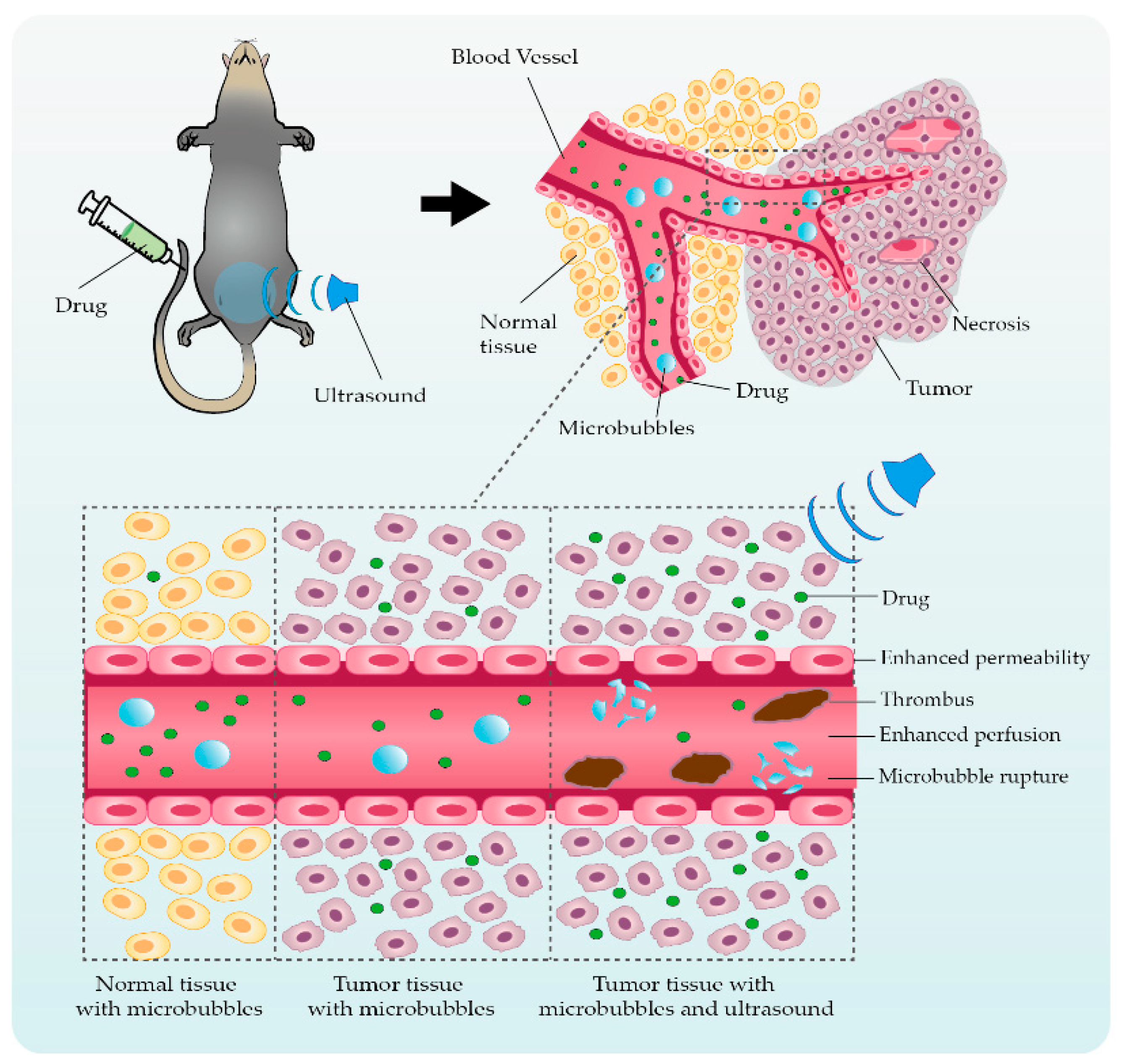 Figure 1. Ultrasound-mediated microbubble cavitation enhances biological barriers’ permeability and material transport. High interstitial pressure aroused by lack of blood perfusion and lymphatic return in solid tumors hinders the uptake and absorption of drug agents in cells. Using ultrasound to mediate the cavitation effect of microbubbles can increase blood–tumor barrier permeability and vascular perfusion, significantly increasing the diffusion of agents and sensitizing chemoresistance.
In recent years, many studies have also confirmed that claudins and ZO-1 play an important role in the permeability regulation of biological barriers such as the blood–tumor barrier [28][29][30][31][32]. Studies have shown that there are a series of intercellular junctions between endothelial or epithelial cells, of which tight junctions are the most important. Between mammalian cells, tight junctions are mainly composed of transmembrane proteins (Occludin), claudins, junctional adhesive molecules (JAMs), and cytoplasmic attachment proteins (ZO family) [33][34][35]. Tight junctions widely exist in biological barrier structures such as intestinal mucosal epithelial cells, interstitial cells, the blood–testis barrier, and the blood–brain barrier [36][37][38][39]. Through research, Bae et al. found that the permeability of tight junctions in the barrier structure increased after physical treatment of the biological barriers, and the expression and distribution of the main components of tight junctions changed [40]. Through research, it was found that after intravenous injection of contrast agent microbubbles, low-frequency ultrasound irradiation can significantly increase the drug concentration in the tissue, and 24 h after the ultrasound irradiation, the drug concentration was significantly reduced, and tissue cells were observed by transmission electron microscopy. The gap between them widened and recovered after 24 h. Changes in the spatial structure of tight junctions are temporally consistent with changes in tissue barrier permeability. This indicates that tight junctions play an important role in the regulation of tissue cell permeability. Studies have shown that the tight junction protein Occludin plays an important role in the process of low-frequency ultrasound irradiation combined with contrast agent microbubbles to open the blood–tumor barrier (Figure 2). When the blood–tumor barrier is opened, the expression level of this tight junction protein decreases [41]. This indicates that the tight junction protein Occludin plays an important role in enhancing the permeability of tissue cells by low-frequency ultrasound irradiation combined with contrast agent microbubbles. 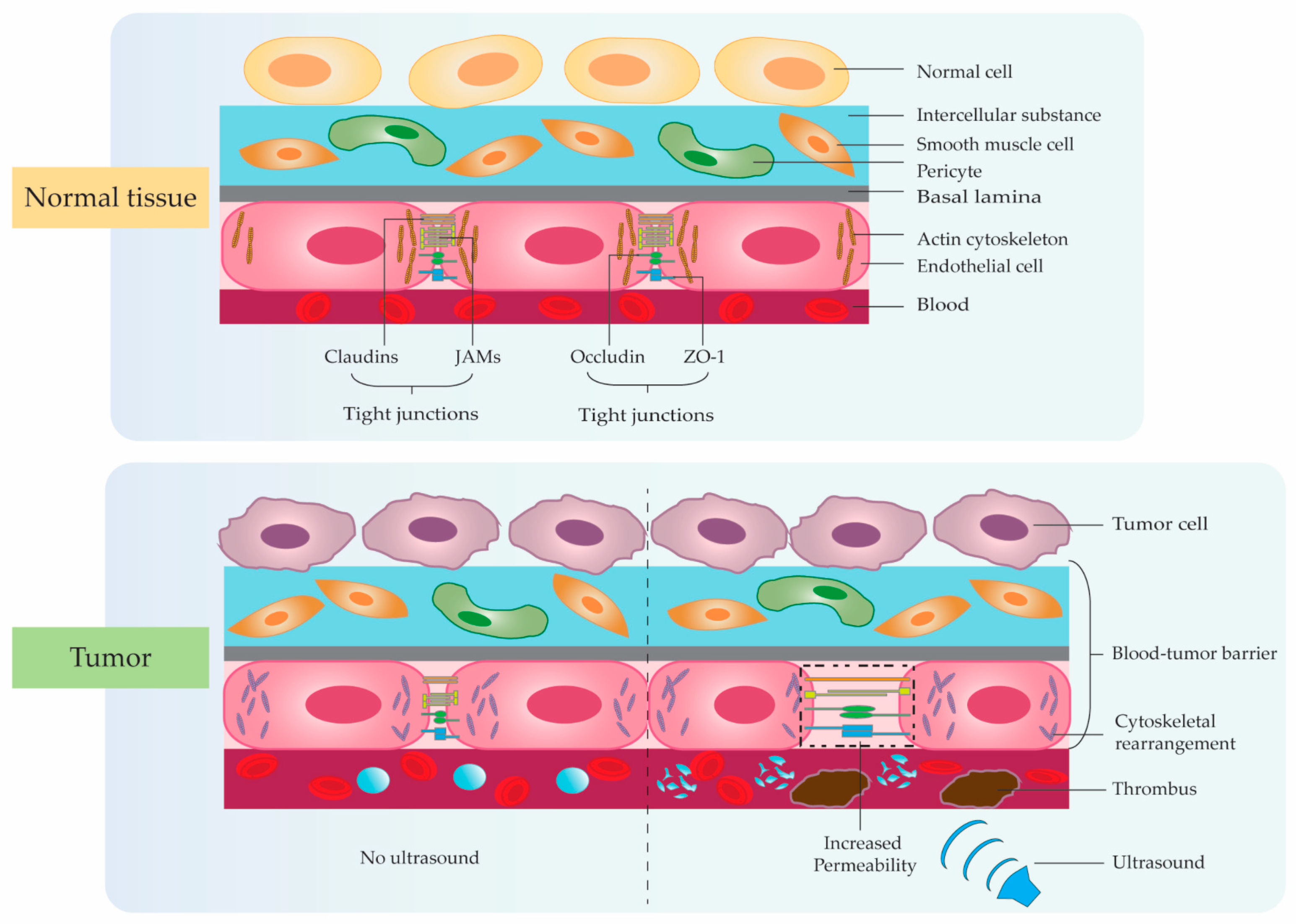 Figure 2. Ultrasound-mediated microbubble cavitation enhancing tumor–blood barrier permeability. The blood–tumor barrier is composed of vascular endothelial cells, basement membrane, and tumor interstitial cells. Biological barrier regulator proteins include Occludin, Claudin, JAM, ZO, and so on. Ultrasound-mediated microbubble cavitation can significantly increase local tissue tight junction protein permeability and increase drug diffusion, meanwhile, can form vascular microcirculation thrombus by further increasing ultrasound frequency to induce tumor ischemic necrosis.
Overall, ultrasound can utilize the local microbubble cavitation to enhance the EPR effect for non-invasive targeted therapy of diseases without affecting the surrounding soft tissues. The cavitation effect can achieve the passive agents’ diffusion in tissue through ameliorating the permeability of tissue and vascular barrier by sonoporation and regulate the intercellular tight junction. Similarly, it can also enhance intracellular uptake via stimulating the clathrin-mediated endocytosis pathway induced by ion channels. On the one hand, the cavitation effect can also enhance the drug delivery efficiency by inducing the releasing vasodilator to a certain extent to increase local tissue blood perfusion. The feasibility and potential of this approach might contribute to achieve better targeted delivery in the prospective fast-revolutionizing disease area.

Although applications of acoustic cavitation have realized significant progress, there are still many difficulties and challenges which require further efforts to explore more suitable delivery systems and effective efficacy. Firstly, the particle size of microbubbles remains a key factor affecting localized drug accumulation and cavitation effects in tumors. Therefore, we need to develop a new process to solve the situation that the cavitation effect is weakened due to the low accumulation of microbubbles around the tumor tissue caused by the unsuitable particle size of microbubbles. Secondly, with the emergence of multifunctional drug delivery systems, the structure with membrane shells continues to present complex trends. We need to reduce the adverse effects of membrane shell material, particle size, and targeted modification type on the cavitation effect in the complex and variable TME for achieving the controllability and stability of the targeted microbubble-loading system between different individuals with finally attaining the standardized application in clinical intervention. Of course, due to the different research directions of each scholar, there are also differences in the parameters they used. We need more efforts to verify the effects of ultrasound intervention time, irradiation time interval, ultrasound frequency, sound intensity, microbubble size, drug dose, and concentration on the therapeutic efficacy of the disease. Meanwhile, the integration of multiple technologies needs to be carried out, including protein-membrane-targeted modification, photothermal, magnetic field, radiation, free radicals, gene interference, immunotherapy, etc., to comprehensively enhance the anti-tumor efficacy. Absolutely, the safety of the delivery vehicle is also an issue that closer attention should be paid to. Although many studies have confirmed the high histocompatibility of microbubbles, more research is still needed in the future to further confirm the potential harm caused by long-term accumulation in the body.

At present, there are still many problems to be solved in the treatment of tumors with low-frequency ultrasound combined with microbubbles, but it is undeniable that this technology has shown great clinical application value as a safe, effective, easy-to-operate, and targeted non-invasive treatment method. With the development of technology, this promising non-invasive tumor treatment method will be widely used in clinical practice.

More
© Text is available under the terms and conditions of the Creative Commons Attribution (CC BY) license; additional terms may apply. By using this site, you agree to the Terms and Conditions and Privacy Policy.
Upload a video for this entry
Information
Subjects: Pharmacology & Pharmacy
Contributors MDPI registered users' name will be linked to their SciProfiles pages. To register with us, please refer to https://encyclopedia.pub/register :
Jide He
,
Zenan Liu
,
Xuehua Zhu
,
Haizhui Xia
,
Huile Gao
,
Jian Lu
View Times: 287
Entry Collection: Biopharmaceuticals Technology
Revisions: 2 times (View History)
Update Date: 15 Aug 2022
Table of Contents
1000/1000
Hot Most Recent