Submitted Successfully!
Thank you for your contribution! You can also upload a video entry related to this topic through the link below:
https://encyclopedia.pub/user/video_add?id=25961
Check Note
2000/2000
Impact of Carbamate Pesticides on Male Reproductive System
Edit
Upload a video
This entry is adapted from 10.3390/ijms23158206

Carbamates are mostly used as pesticides worldwide, despite their interesting medical applications, such as in the treatment of myasthenia gravis, Alzheimer’s disease, or glaucoma, among others [1]. Carbamates were firstly extracted from a West African plant, Calabar bean, Physostigma venenosum, and are classified as esters of N-methyl carbamic acid [2]. This class of chemicals is known to lack residue persistency in the environment and in mammalian species due to their rapid hydrolyzation to, usually, less toxic metabolites, amine, and carbon dioxide (CO2), which are easily excreted from the organism [3]. However, because of their lack of species selectivity, and their lipophilicity and toxicity, its overexposure and/or chronic exposure poses a serious threat to the environment, to human beings and to other animal species [4][5]. Compared to other classes of pesticides, carbamates exhibit one of the widest ranges of subtypes (carbendazim, carbaryl, carbofuran, aminocarb, thiodicarb, mancozeb, among others). Each compound has its application (e.g., insecticide, fungicide, and herbicide), characteristics, and harmful effects (as reviewed by King and Aaron [1]). Despite these differences, the compounds from the carbamate´s family share the common trait of being both acetylcholinesterase (AChE) inhibitors, through its carbamylation, and endocrine-disrupting chemicals (EDCs), interfering with the hypothalamic–pituitary–testicular (HPT) axis, which may cause several reproductive problems [4][6][7][8].
The endocrine system consists of a series of glands throughout the body that produce and secrete hormones to regulate a wide range of physiological processes, such as respiration, metabolism, reproduction, sensory perception, movement, sexual development, and growth. The main hormone-producing glands are the hypothalamus, pituitary, parathyroid, pancreas, thyroid, adrenal, pineal, ovaries, and testis. Each gland produces and is under the influence of specific hormones or hormonal cues, controlling the body homeostasis. There are several factors that can influence the function of endocrine organs, including aging, certain diseases and conditions, stress, environment, and genetics (7). EDCs are compounds that can mimic the action of hormones, binding to their receptors and inhibiting or stimulating the respective cascade and the HPT axis. In addition, EDCs can also affect the concentration of hormones through the stimulation or inhibition of their degradation, availability, or synthesis [9].

2. The Role of Acetylcholine in Male Reproductive Function

The toxicity of carbamates occurs due the inhibition of the AChE through carbamylation, which stops the degradation of the neurotransmitter acetylcholine (ACh) and leads to its accumulation in brain synapses and neuromuscular junctions. At physiological conditions, synaptic AChE prevents the accumulation of ACh and consequent overstimulation of the ACh receptor through its hydrolyzation to acetic acid and choline. Next, acetic acid feeds into the Krebs cycle, while choline is taken up by the neuron and resynthesized into new ACh. In this way, AChE inhibition results in the accumulation of ACh, overstimulating the muscarinic and nicotinic ACh receptors (Figure 1). The accumulation of ACh affects the whole organism and the most observed symptoms include sweating, excessive salivation, constricted pupils, blurred vision, lacrimation, wheezing, gastrointestinal issues including nausea, vomiting, and diarrhea, urinary incontinence and, in more severe cases, paralysis, cyanosis, and respiratory issues, which can last from a few hours to a few days or weeks [1]. Contrarily to organophosphates, another class of anticholinesterase pesticides, carbamates reversibly inhibit AChE, and are, therefore, less toxic [4]. 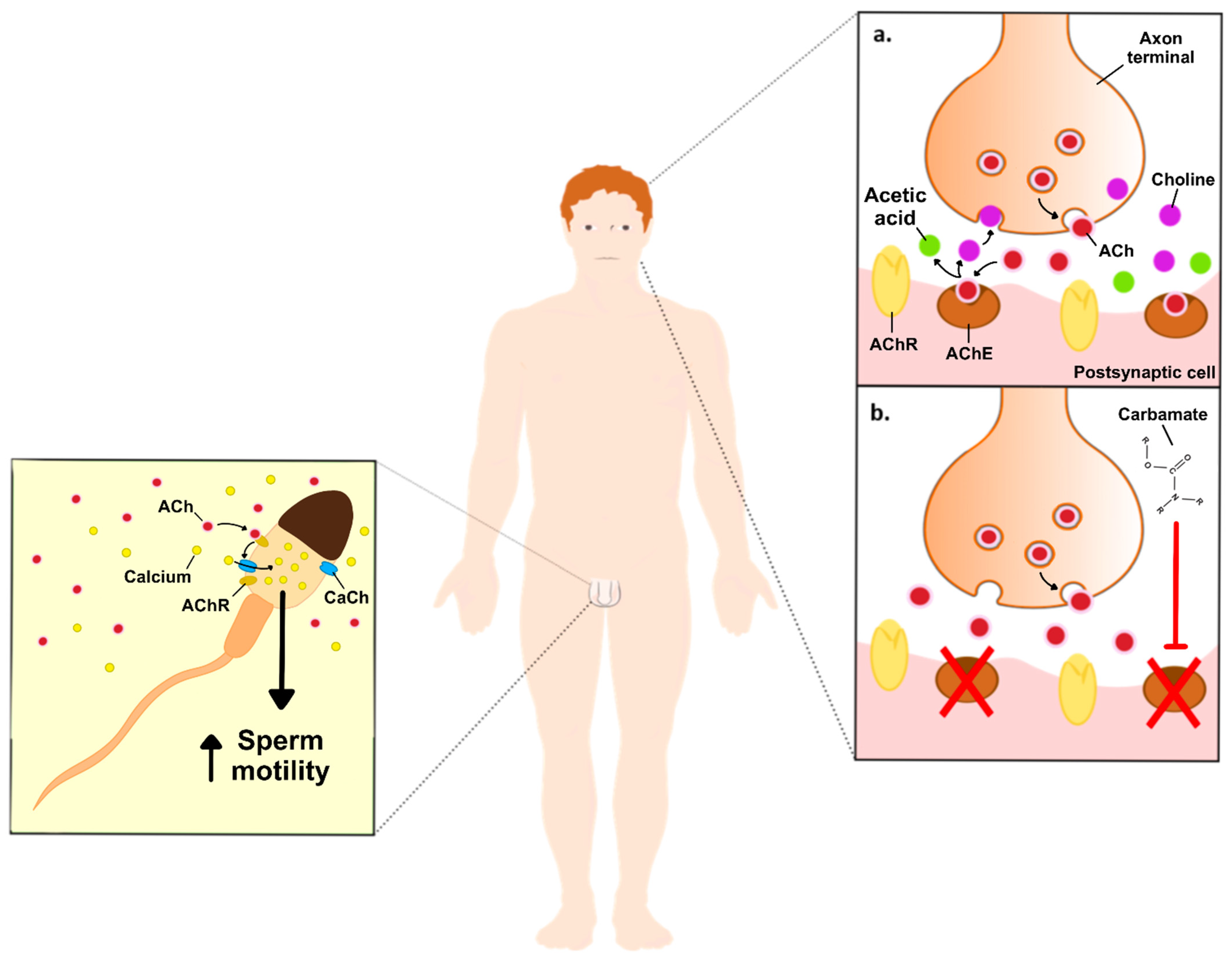 Carbamate pesticides have endocrine-disrupting properties that include disruption of the male reproductive system through the perturbation of the HPT axis, although the molecular mechanisms are not fully understood [4]. As the name indicates, this axis is composed by the hypothalamus, pituitary gland, and testes, and its normal function is crucial to provide the right amounts of hormones for male sexual development and function, and so any abnormality can lead to male infertility [37].
The hypothalamus is responsible for the secretion of pulsatile gonadotropin-releasing hormone (GnRH), which stimulates the synthesis and secretion of the gonadotropins luteinizing (LH) and follicle-stimulating (FSH), by the adenohypophysis. Then, FSH travels through the bloodstream and binds to its receptors on Sertoli cells, while the LH binds to the LH/chorionic gonadotropin receptor (LH/CG-R) present on the membrane of Leydig cells and stimulates steroidogenesis (Figure 2) [38][39]. The act of mobilizing cholesterol into mitochondria is the first and limiting step in the multi-phase process of testosterone production [40]. Cholesterol mobilization is mediated by the action of the translocator protein (TSPO) and the steroidogenic acute regulatory protein (StAR), both dependent on LH-induced increase on cAMP levels and cAMP-dependent phosphorylation by protein kinase A (PKA). Then, the cytochrome P450 enzyme (CYP11A1), which is present on the matrix side of the inner mitochondrial membrane, catalyzes the conversion of cholesterol into pregnenolone. Three enzymes—3β-hydroxysteroid dehydrogenase (HSD3B), 17α-hydroxylase/17,20 lyase (CYP17A1), and type 3 17β-hydroxysteroid dehydrogenase (HSD17B)—progressively convert pregnenolone into testosterone in the smooth endoplasmic reticulum [41]. Testosterone, then, regulates the pituitary’s production and secretion of LH through a negative feedback mechanism [42]. 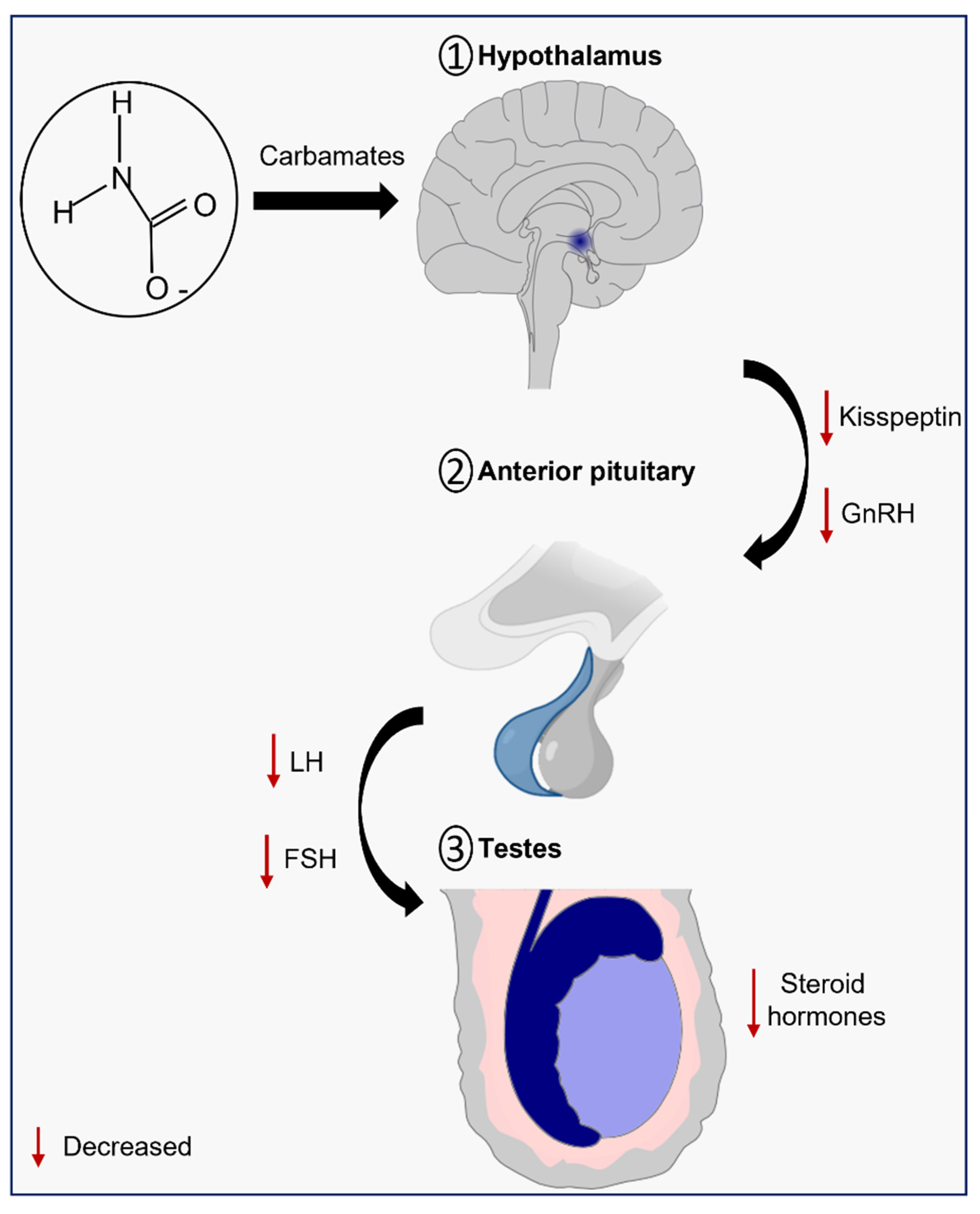 Figure 2. Schematic illustration of the effects of carbamates on the hypothalamic-pituitary-testicular (HPT) axis.
Several studies highlight the effects of carbamate exposure on the HPT axis. Taken together, it is suggested that exposure to carbamates impairs steroidogenesis through the downregulation of steroidogenic enzymes and/or toxicity to Leydig cells. The molecular mechanisms, however, are still poorly understood, which highlights the importance for further studies in this field.