+1 point
Thank you for your contribution! You can also upload a video entry related to this topic through the link below: https://encyclopedia.pub/user/video_add?id=25872
Check Note
2000/2000
Atopic Dermatitis and Food Allergy

Atopic dermatitis (AD) is a chronic inflammatory skin disorder characterized by intense pruritus, eczematous lesions, and relapsing course. It presents with great clinical heterogeneity, while underlying pathogenetic mechanisms involve a complex interplay between a dysfunctional skin barrier, immune dysregulation, microbiome dysbiosis, genetic and environmental factors. All these interactions are shaping the landscape of AD endotypes and phenotypes. In the “era of allergy epidemic”, the role of food allergy (FA) in the prevention and management of AD is a recently explored area.

Atopic dermatitis (AD) is a chronic inflammatory skin disorder affecting more than 230 million people worldwide [1][2]. With an increasing global prevalence, up to 20% of children and 10% of adults in high-income countries suffer from AD [3][4][5], while AD’s morbidity burden designates the disease as the skin disorder with the highest impact on quality of life in terms of disability-adjusted years [6].
AD presents with great heterogeneity in terms of severity, clinical features, and course, with a complex underlying pathophysiology [5], which involves an interplay between the dysfunctional skin barrier, immune dysregulation—starting with a core T helper 2 (TH2) response accompanied by IgE sensitization to environmental allergens and progressing with a widening of the adaptive immunity with TH1, TH17, and TH22 responses—and skin microbiome dysbiosis [7][8]. In addition, genetic susceptibility, along with filaggrin gene’s mutations being the central but not the only recognized genetic disorder, and environmental factors such as ultraviolet radiation, air pollution, water hardness, household hygiene, and climate change contribute to the multidimensional model of atopic dermatitis [9].
As allergic diseases have reached epidemic proportions, with the first epidemic wave of respiratory allergy increasing about 50 years ago, we are now riding a second epidemic wave of “food allergy” [10][11]. In respect to the TH2 endotype, atopic dermatitis has been proposed as the first “step” in a long although debatable pathway known as the “atopic march”, with food allergy, allergic rhinitis, and asthma presenting either concomitantly or at a later stage [12].
Food allergy (FA) is defined as a food hypersensitivity reaction mediated by immunologic mechanisms, while the term IgE-mediated food allergy is used when the role of IgE is underlined [13]. Food sensitization refers to the production of food-allergen-specific IgE but is not synonymous with food allergy, as individuals can produce specific IgEs to foods without presenting symptoms upon exposure. Hence, sensitization is prerequisite but not synonymous with food allergy [14]. Food allergen sensitization can be identified by skin prick testing or in vitro immunoassays for specific IgE to whole-allergens extracts or allergens components (pure allergen proteins) [15][16]. Not only IgE-mediated food allergy but also other endotypes of food allergy (either non-IgE-mediated or mixed) have been implicated either in the exacerbations or in the morbidity of AD complexing even more the landscape of atopic dermatitis–food allergy interaction [17][18] (Figure 1). 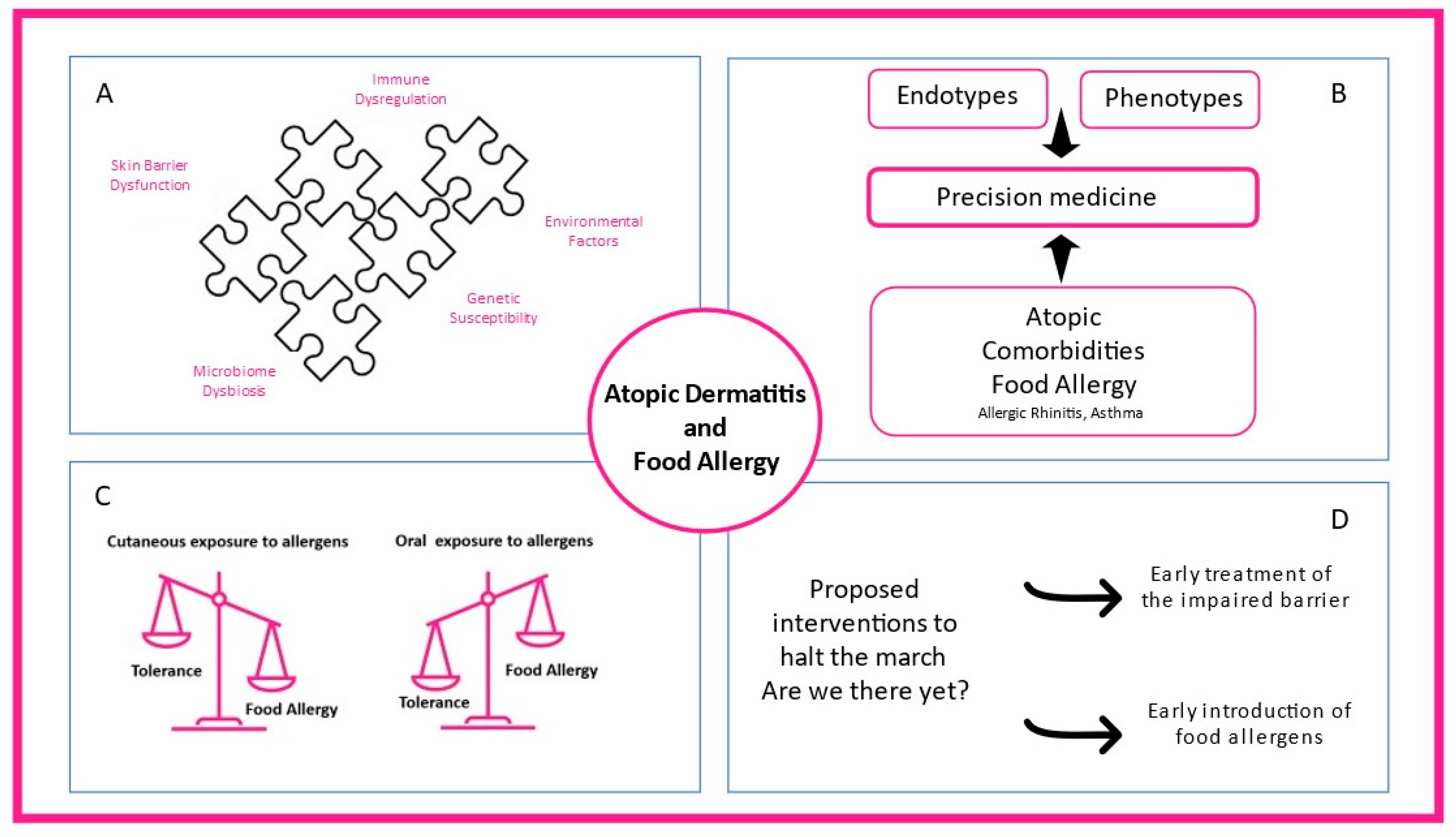 2. Association between Food Sensitization and Food Allergy with Atopic Dermatitis

2.2. Food Sensitization and Food Allergy among Patients with AD

Numerous studies support that more severe phenotypes of AD are associated with more frequent diagnosis of food allergy, ranging between 33% to 39%, with occasional studies reporting higher rates up to 80% [26][27][28][29], while food allergy prevalence in the general population is estimated about 0.1–6% [30]. Hence, atopic dermatitis is proposed as a major risk factor for food sensitization and IgE-mediated food allergy [22][31]. Population-based studies have shown that the likelihood of food sensitization is up to six times higher at 3 months of age in patients with AD compared to healthy controls [22]. When including patients with established AD, the prevalence of food sensitization is up to 66%, while proven food allergy by oral food challenges is up to 81% [22]. The Danish Allergy Research cohort (DARC) showed that up to 53% of children with AD, aged 6 months to 6 years, were sensitized to food allergens, while food allergy was confirmed in 15% of them [19]. In the Health Nut study, a large population-based Australian study (n = 4453), infants with AD were 6 times more likely to have egg allergy (95% CI 4.6, 7.4) and 11 times more likely to have peanut allergy (95% CI 6.6, 18.6) by 12 months than infants without AD at 12 months of age [32]. Although previous studies suggested that the presence of AD, particularly in its more severe form, is associated with a prolonged course of milk and egg allergy [33][34], recent data were not confirmatory [35]. Such discrepancies might be attributed to different study designs and populations with different disease severity.

3. Patterns of Clinical Reactivity to Foods in Children with AD

There are three patterns of clinical reactivity to foods in children with AD: (a) immediate-type reactions (IgE-mediated within the first 2 h of consumption), (b) delayed exacerbation of AD (non-IgE-mediated), and (c) mixed reactions with a combination of IgE- and non-IgE-mediated clinical features.

Immediate-type reactions manifest with either cutaneous symptoms (urticaria, angioedema, flushing) or, in the context of anaphylactic reactions, also including symptoms from the respiratory tract and/or gastrointestinal and/or cardiovascular symptoms (tachycardia, arrhythmias, hypotension, cardiac arrest) [36]. These reactions usually occur within the first 2 h of consumption, ranging from mild single-organ reactions to severe, life-threatening anaphylaxis [36][37].

Delayed, non-IgE-mediated reactions usually occur 6–48 h after consumption of the implicated food allergens, in most cases, as atopic dermatitis flare up [38]. The pattern of delayed exacerbation of AD is not clearly defined in adult-onset AD. Manam et al. reported that challenge-proven food allergy in adults with AD is uncommon despite higher rates of food sensitization compared to healthy controls. Half of patients with confirmed delayed food allergy by food challenge reported significant decrease of AD exacerbations after strict elimination diet of the offending foods [36].

Up to 40% of children experience more complex symptoms combining IgE-mediated symptoms and AD exacerbation [39]. In a study of 64 children with AD who underwent 106 double-blind placebo-controlled food challenges to hen’s egg, milk, wheat, or soy, a mixed reaction was observed in 45%, while 12% had only a delayed reaction [40]. However, in the Danish Allergy Research cohort (DARC) study, 95% of the patients during the double-blind placebo-controlled challenges developed the immediate-type reaction [41]. Conclusively, the frequency and pattern of clinical reactivity varies among patients with AD.

4. Diagnosis and Management of Food Sensitization and Food Allergy in Patients with AD

In clinical practice, the identification of IgE sensitization can sometimes complicate the management of AD. Food sensitization and food allergy are not synonymous, and thus, not all sensitized patients will react upon exposure to certain food allergens [26]. Knowing the high asymptomatic food allergen sensitization rates in patients with AD and that AD is predominantly a TH2-cell-mediated disease, with IgE being more a “bystander” than an actual driver in the disease, management of food sensitization and allergy in AD patients can be challenging.
In case of patients with AD and a compatible history of IgE-mediated food allergy, in vivo and/or in vivo allergy diagnostic procedures should be conducted. According to international guidelines, food-specific skin tests or sIgEs should be considered in all children below 5 years with moderate-to-severe AD, especially those unresponsive to topical treatment [42]. In the light of Learning Early About Peanut Allergy (LEAP) study results, new addendums were made in the National Institutes of Allergy and Infectious Diseases (NIAID) published consensus in regard to peanut allergy: (a) In infants with severe AD and/or egg allergy, measurement of peanut IgE level and/or SPT should be conducted before introduction into the diet; (b) infants with mild-to-moderate AD should not be tested for peanut sensitization, and peanut should be introduced in diet approximately at six months of age; and (c) infants without AD should be free in introduction of peanut and other foods according to the wish of the family [42][43].

The negative predictive value of SPTs to foods in patients with AD is 90–95%, while the positive predictive value is less than 50%, suggesting that these tests are of high value in excluding food allergy [44][45]. Moreover, atopy patch testing (APT) to food allergens has been studied to evaluate non immediate eczematous exacerbations in children with AD. Although promising, they are not standardized yet and are not suggested in routine diagnosis of food allergy in patients with AD [46][47]. More recently, specific IgE levels and the pattern of reactivity to food components have been proposed to distinguish AD food allergic from tolerant subjects. Seventy-eight children with moderate-to-severe AD were assessed due to a history of clinical reactivity to milk, egg, peanut, wheat, and soy, showing that 91% percent of them were sensitized, while 51% reported allergy to at least one of these five food allergens. The IgE levels corresponding to each of these foods as well as the levels of specific components (Bos d8: milk casein, major allergen in cow’s milk; Gal d1: ovomucoid major allergen in Hen’s egg; and Ara h2: 2S albumin, major peanut allergen) were significantly higher in the moderate-to-severe AD allergic group [48].

4.3. The Role of Elimination and Reintroduction of Certain Foods in Diagnosis of Food Allergy

In case of exacerbation of AD due to a potential food allergen, in the absence of an IgE-mediated reaction, an elimination diet is still recommended by the European Academy of Dermatology and Venereology recent guidelines [49]. Due to a potential placebo effect, which may accompany the elimination, a reintroduction after a short period of time in which an improvement is observed is suggested in order to confirm the diagnosis, and then, a strict elimination diet could follow as long as skin moisturizing is ensured as the first step of standard of care [39].

More
© Text is available under the terms and conditions of the Creative Commons Attribution (CC BY) license; additional terms may apply. By using this site, you agree to the Terms and Conditions and Privacy Policy.
Upload a video for this entry
Information
Subjects: Allergy; Dermatology
Contributors MDPI registered users' name will be linked to their SciProfiles pages. To register with us, please refer to https://encyclopedia.pub/register :
Niki Papapostolou
,
Paraskevi Xepapadaki
,
Stamatis Gregoriou
,
Michael Makris
View Times: 134
Revisions: 2 times (View History)
Update Time: 05 Aug 2022
Table of Contents
1000/1000
Hot Most Recent