+1 point
Thank you for your contribution! You can also upload a video entry related to this topic through the link below: https://encyclopedia.pub/user/video_add?id=25689
Check Note
2000/2000
Chitin and Chitosan

Chitin and its derivative chitosan are highly abundant polymers in nature, appearing in both the shells and exoskeletons of various marine and non-marine species. Since they possess favorable properties, such as biocompatibility, biodegradability, non-toxicity, and non-immunogenicity, they have gained recent attention due to their enormous potential biomedical applications. The polycationic surface of chitosan enables it to form hydrogenic and ionic bonds with drug molecules, which is one of its most useful properties. Because chitosan is biocompatible, it can therefore be used in drug delivery systems. The development of chitosan-based nanoparticles has also contributed to the significance of chitin as a drug delivery system that can deliver drugs topically. Furthermore, chitin can be used in cancer treatment as a vehicle for delivering cancer drugs to a specific site and has an antiproliferative effect by reducing the viability of cells. Finally, chitosan can be used as a wound dressing in order to promote the faster regeneration of skin epithelial cells and collagen production by fibroblasts.

Chitin is a polysaccharide composed of crystallized N-Acetyl D-glucosamine monomers and 1–4 glycosidic bonds [1][2]. This structural polymer is highly abundant in the shells of marine crustaceans, cell walls of various organisms such as fungi, coralline algae, green and brown algae, and bacteria, as well as the exoskeleton of crustaceans, molluscs, and insects (Figure 1) [3][4][5][6][7][8][9]. In 2014, the first evidence of chitin inside the cell walls of the coralline algae Clathromorphum compactum was observed, and chitin was found to play an important role in the calcification process of this marine species [4]. Initially named fungine in 1811, it was subsequently renamed chitin in 1823 [10]. It occurs in about 19 animal phyla, bacteria, algae, and fungi, with a production rate of 1011–1014 tons per year [10]. Although chitin is present in nature, multiple tons of it transform into marine shell wastes or other types of industrial wastes [11]. Chitin has recently gained much attention from scientists due to its important properties, which include nontoxicity, biocompatibility, and biodegradability, the ability to degrade by enzymes, enabling it to be used in many biomedical applications, including drug delivery, tissues engineering, wound healing, and cancer therapy. [11]. In spite of being the second most abundant polymer after cellulose, chitin is still largely unutilized because its semi-crystalline structure with a large number of intermolecular hydrogen bonds causes it to be insoluble in most solvents [6][12]. With the advent of new technologies, however, the partial N-deacetylation of chitin can now be converted into a soluble substance called chitosan. The deacetylation of extracted chitin is largely carried out in strong alkaline media, resulting in chitosan becoming soluble in acidic environments [13]. Hence, chitosan is a synthetically deacetylated form of chitin that can be used in the food industry as an edible and biodegradable film for packaging food, food preservations, pharmaceuticals, water and wastewater treatment, cosmetics, wound dressings, and many other applications [1][6][11][14][15]. 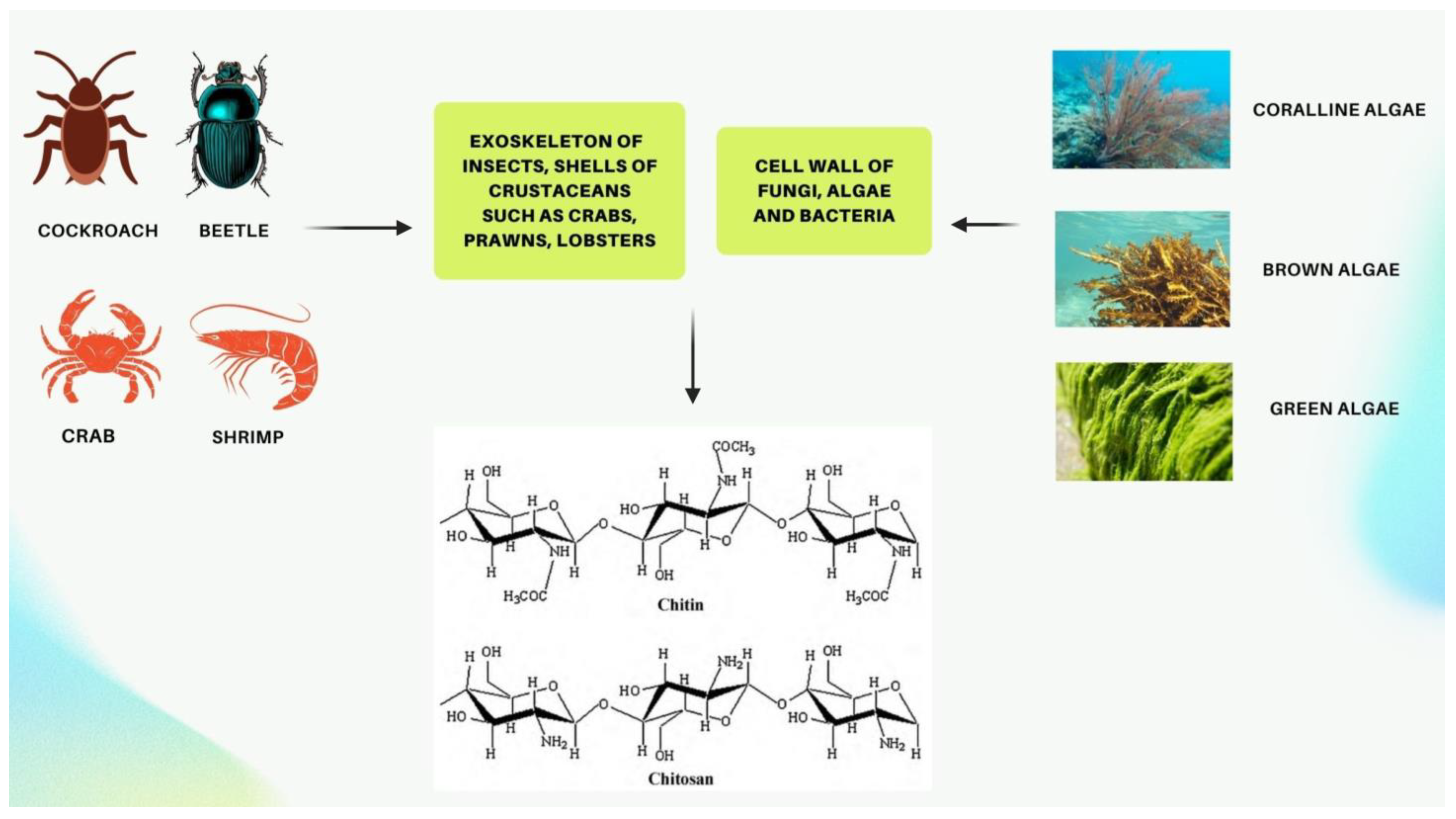 Figure 1. Sources of chitin and the structure of chitin and chitosan. [Created with BioRender.com accessed on 10 May 2022].
As mentioned earlier, the shells of crustaceans and shrimps, insect exoskeletons, and the cell walls of fungi such as aspergillus and mucor are the main sources of chitin and chitosan [16]. A large scale of industrial chitin production is derived from crab shells and shrimp shells, so recycling these wastes will yield valuable byproducts that can be used in medical and pharmaceutical applications [16]. To prepare chitin, the first step is to extract it from shellfish wastes. Shellfish wastes contain chitin, lipids, inorganic salts, and proteins as major components. Hence, chitin is extracted from these structural components using two common methods: chemical and biological processes (Figure 2) [17][18][19]. The purpose of these processes is to isolate chitin from minerals such as calcium carbonate and calcium phosphate and proteins and lipids or other macromolecules embedded in shells and cell walls [17]. In strong alkaline (>1 M NaOH) and acetic (>3 M HCl) environments combined with heat, chitin can be transformed into its deacetylated form, chitosan, or even partially fragmented [20]. Therefore, sulfuric acid, nitric acid, formic acid, acetic acid, and in particular, dilute hydrochloric acid are commonly used in the demineralization process of chitin [17][18][21]. The separation of proteins and pigments such as carotenoids is performed using dilute sodium hydroxide and acetone (or other organic solvents), respectively [17][18]. As an alternative method, biological processes may provide more desirable results due to their relatively low cost and environmental friendliness, low energy consumption, and reproducibility. They can also produce chitin with a higher molecular weight and better crystal structure [17]. Biological processes rely largely on enzymatic reactions and microbial fermentation [17][22]. However, the basis of these reactions, such as with the chemical process, is the production of acidic and alkaline products but from microorganism fermentation and enzymatic metabolites [17]. 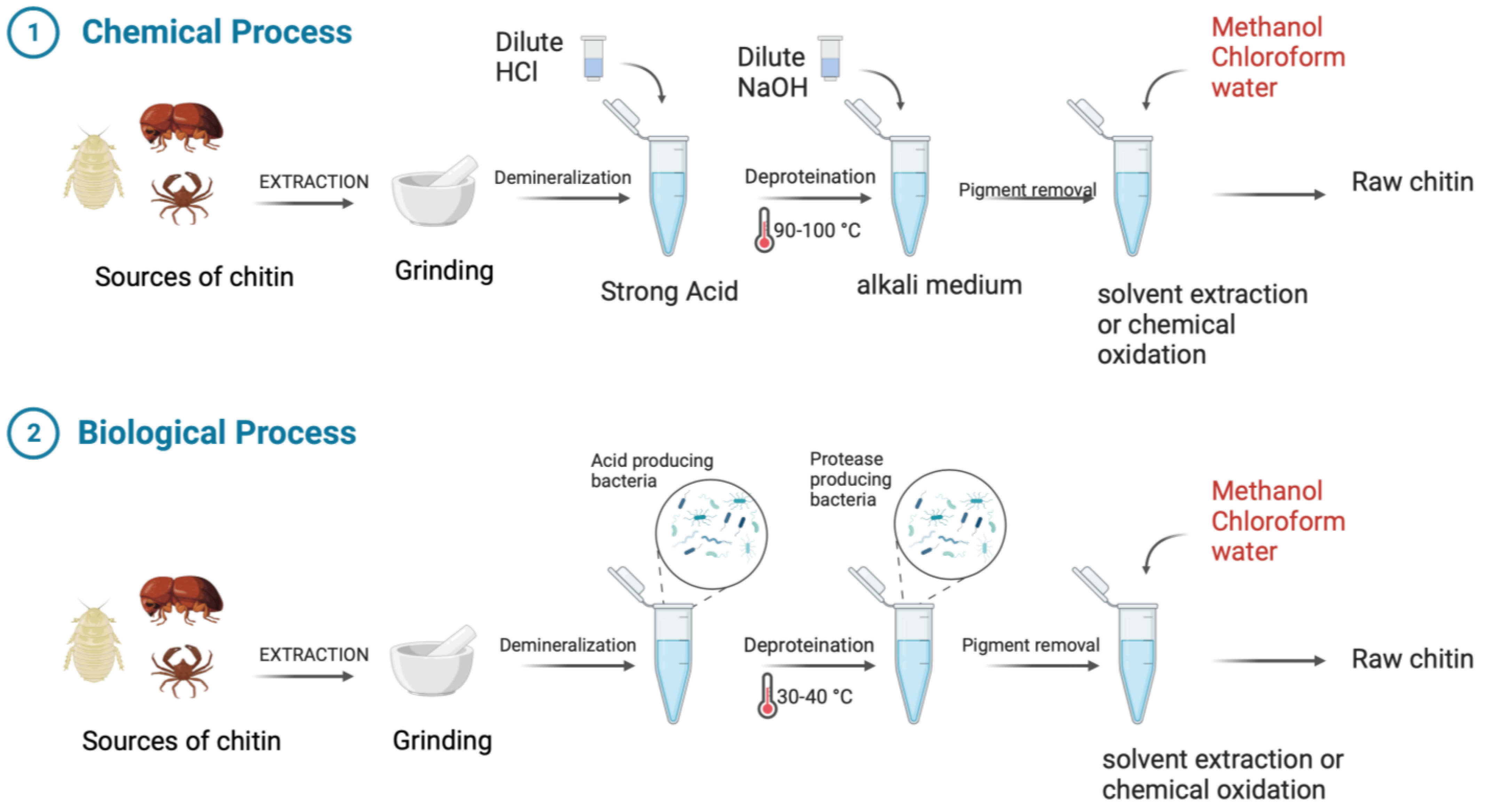 Figure 2. Chemical and biological processes to isolate chitin from animal sources. [Created with BioRender.com accessed on 10 May 2022].
Though chemical processes make chitin extraction easier and more efficient, they have some drawbacks when used on an industrial scale with industrial protocols. There are two main concerns about conventional methods of chitin extraction: the use of strong chemicals such as HCl, and the lower quality of raw extracted chitin due to contamination [15]. Therefore, obtaining high-quality chitin involves sophisticated instrumentation such as the use of ultrafiltration and molecular sieving. However, these techniques are costly, which creates significant financial barriers, especially for developing countries. Recent efforts are underway to develop novel methods for chitin extraction. As an example, Tissera et al. introduced a new process called “pretreatment” for the extraction of chitin from blue swimmer crab shell waste, proposing that this procedure helped improve the quality of extracted chitin for large-scale production [15]. They soaked crushed crab shell pieces in acetic acid (with concentrations of 0.05, 0.10, and 0.50 M) and citric acid with concentrations of 0.05, 0.10, and 0.50 M and found that acetic acid at 0.5 M resulted in the better cleaning of crab shells. They found that this pre-acid treatment helped the rigid structure of shells to become more flexible as well as slightly beginning the process of demineralization [15]. The results showed that this treatment with 0.5 M acetic acid helped remove any remaining muscle tissue that remained, which led to a lower concentration of NaOH being required for the deproteinization of crab shells. Furthermore, this pretreatment led to a lower concentration of acid required for the demineralization step since acetic acid aids in calcium carbonate removal [15].
Traditional chitin extraction methods have been thought of as time-consuming and expensive, with production times greater than one day. Therefore, other methods aimed at speeding up the process of chitin extraction have been studied in recent years. Kaya et al. proposed to treat the shells of crustaceans such as crabs, crayfish, and shrimp with two NaClO treatments (10 min each) before the main processes of demineralization and deproteinization to ensure the complete disintegration and removal of pigments [23]. They found that by introducing NaClO, they were able to extract chitin in a shorter amount of time while the yield of chitin was similar to conventional extraction, and the color of extracted chitin was white, as in commercially available chitin [23]. The elemental analysis, FT-IR, and XRD of extracted chitin suggested that it has a high similarity to commercial chitin; consequently, they suggested that this new treatment of chitin should be considered for extracting chitin from crab shells, crayfish shells, and shrimp shells [23].
In another innovative study, Machałowski et al. isolated chitin from Caribena versicolor spider molt cuticles [24]. Arachnoids have a mineral-free cuticle, so demineralization (such as decalcification) can be skipped, and chitin isolation can begin with deproteinization and depigmentation [24]. Their study included removing pigments as well as chitin from spider cuticles using microwave-assisted methods (MWI) [24]. In the first step, which involved removing lipids and waxes from the cuticle, the cuticles were exposed to microwave radiation while being treated with chloroform and ethanol in a ratio of 2 to 1 [24]. In the second step, they used microwave radiation alongside NaOH treatment to remove other proteins and pigments from the cuticle [24]. The final step was to treat the cuticles with H2O2 under microwave radiation in order to remove any residual pigments and obtain tubular chitin [24]. The bodies of C. versicolor spiders are covered with a strong exoskeleton (cuticle) consisting of an inner layer with chitin and proteins and an outer layer (without chitin) [24]. Due to this, these spiders lose a large number of chitin-rich cuticles during their molting cycle; therefore, tubular chitin from their cuticles could be used as a scaffold-based catalyst and tissue engineering material [24].

More
© Text is available under the terms and conditions of the Creative Commons Attribution (CC BY) license; additional terms may apply. By using this site, you agree to the Terms and Conditions and Privacy Policy.
Upload a video for this entry
Information
Subjects: Polymer Science
Contributor MDPI registered users' name will be linked to their SciProfiles pages. To register with us, please refer to https://encyclopedia.pub/register :
Azizur Rahman
View Times: 271
Revisions: 2 times (View History)
Update Date: 01 Aug 2022
Table of Contents
1000/1000
Hot Most Recent