+1 point
Thank you for your contribution! You can also upload a video entry related to this topic through the link below: https://encyclopedia.pub/user/video_add?id=25141
Check Note
2000/2000
Bilberry Supplementation on Metabolic and Cardiovascular Disease Risk

Bilberry (Vaccinium myrtillus L.) is one of the richest natural sources of anthocyanins which give berries their red/purple/blue coloration. Anthocyanins are powerful antioxidants and are reported to play an important role in the prevention of metabolic disease and CVD as well as cancer and other conditions.

Metabolic syndrome is a cluster of conditions that includes insulin resistance, central obesity, hypertension, elevated triglycerides, decreased high-density lipoprotein (HDL) cholesterol and low-grade chronic inflammation [1], increasing the risk of developing cardiovascular disease (CVD) and type 2 diabetes mellitus (T2DM) [2]. Increased oxidative stress is one of the triggers of chronic inflammation [1]. Atherosclerosis, the main underlying cause of CVD, is associated with an ongoing inflammatory response and oxidative processes that lead to the modification of atherogenic lipoproteins [3]. T2DM is considered to be associated with increased oxidative stress, inflammation, and dyslipidemia, which may play a significant role in the development of cardiovascular complications, cancer and vision loss through cataracts and retinopathy [4][5][6][7][8].
The management of the major risk factors of metabolic syndrome with conventional therapies is partially effective in reducing cardiovascular events and progression to obesity and T2DM. Recently, there is growing awareness of the importance of dietary factors as a major determinant of metabolic syndrome. Increased consumption of fruits and vegetables has been associated with a decreased risk of metabolic syndrome and CVD. Polyphenolics present in fruits and vegetables have been shown to provide diverse cardioprotective effects [9]. Berries, particularly bilberry (Vaccinium myrtillus L.) which belongs to the heather family (Ericaceae), have a very high content of anthocyanins, which are polyphenolic compounds that give berries their red/purple/blue coloration [8][10]. Bilberry is one of the richest natural sources of anthocyanins and their anthocyanin content is higher than that of other types of berries, such as strawberry, cranberry, elderberry, sour cherry, and raspberry [11][12][13][14]. A total of 15 different types of anthocyanins have been identified in bilberry fruit, juice, and extract. In addition to anthocyanins, bilberry also contains flavonols (quercetin and catechins), tannins and phenolic acids [11].
Anthocyanins are powerful antioxidants that can neutralize free radicals [15]. In addition to their antioxidant effects, anthocyanins have been reported to suppress lipid peroxidation, stabilize DNA, modify adipocyte gene expression, improve insulin secretion and sensitivity, and have anti-carcinogenic, anti-inflammatory, and antibacterial effects [12][16][17]. Although the potential value of bilberry in the treatment or prevention of conditions associated with inflammation, dyslipidemia, diabetes and CVD has been recognized, strong evidence from controlled human supplementation studies in T2DM patients is lacking, and data from in vitro studies and animal studies cannot always be extrapolated to the clinical setting [18].

Anthocyanins are water-soluble polyphenolic vascular pigments that give berries their bright coloration [8][10]. The relative color of anthocyanins in aqueous solution is pH dependent. In acidic conditions, anthocyanins appear as red, but turn blue when the pH increases and finally become colorless at very high pH [19]. In terms of chemical structure, anthocyanins are glycosylated, polyhydroxy or polymethoxy derivatives of 2-phenylbenzopyrylium (flavylium cation) that contain two phenyl rings (A and B) separated by a hetero-cyclic (C) ring [20]. Anthocyanins usually contain a single glucoside unit but vary in the number of hydroxyl groups, the nature and number of sugars attached to the molecule, the position of the attachment, and the nature and number of aliphatic or aromatic acids attached to sugars in the molecule [16]. The main anthocyanins found in bilberry in decreasing contents are delphinidins (15.17%), cyanidins (8.36%), petunidins (6.64%), malvidins (5.43%) and peonidins (1.87%) [11][20] (Figure 1). Common sugars that attach to anthocyanins include glucose (Glu), galactose (Gal), arabinose (Ara), rutinose (Rut), rhamnose (Rham), and xylose (Xyl) and these sugars are bound as mono-, di-, or trisaccharide forms [21]. Anthocyanins have powerful antioxidant properties, and the content of anthocyanin directly correlates with the antioxidant activity of plants [11][22][23][24]. 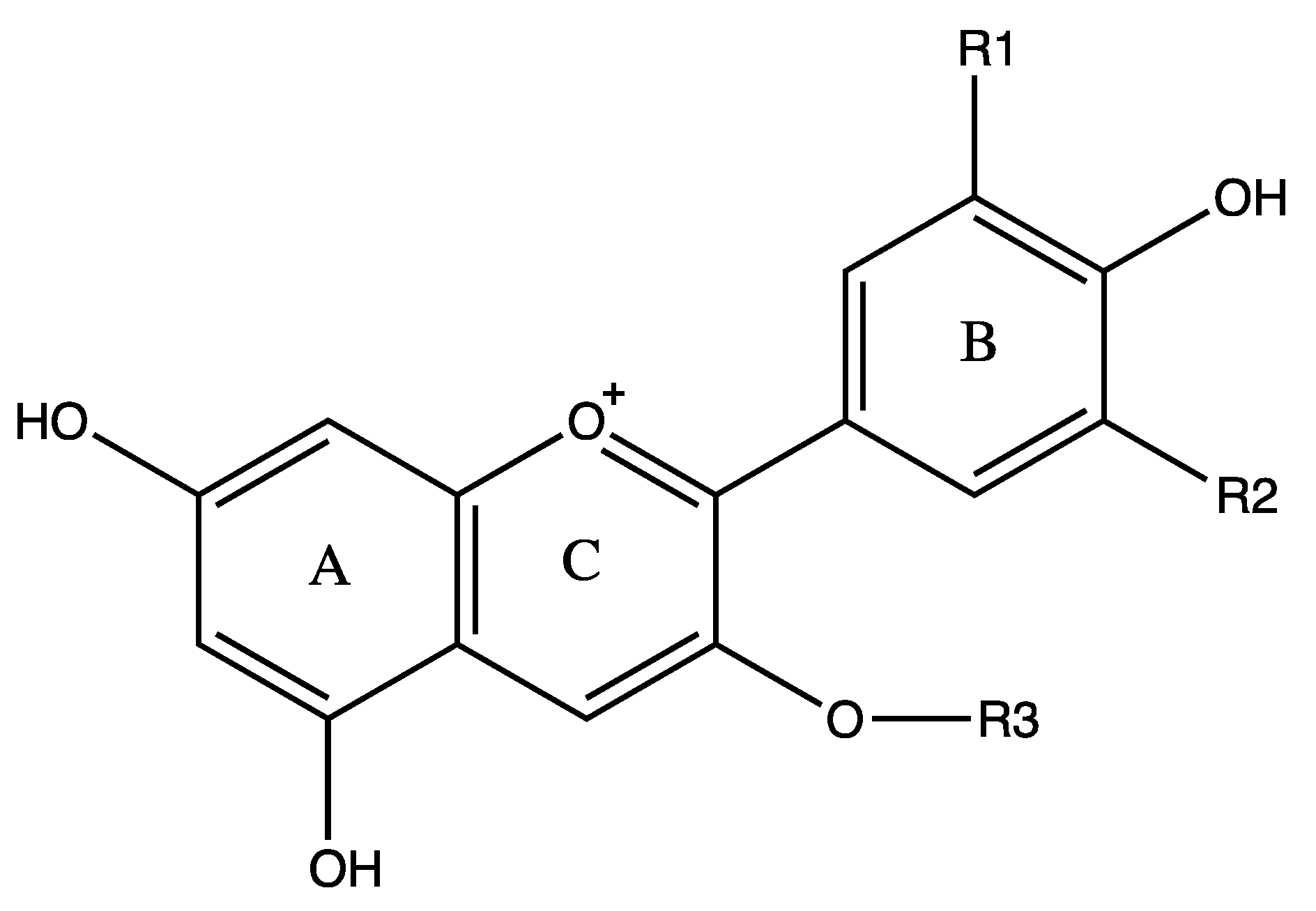 Figure 1. Structures of the main anthocyanin-3-O-glucosides found in bilberry and respective wavelength at the maximum absorption in the visible region (λmax). Note that anthocyanins have characteristic colors, but the color of anthocyanins can change with the pH of the solution [11][20].
The usual dietary intake of anthocyanins is approximately 200 mg daily [25]. Anthocyanins, unlike other polyphenolic flavonoids, are absorbed rapidly in the intact glycosidic form and do not undergo extensive metabolism [26]. Anthocyanins can be detected in the plasma 6–20 min following consumption and plasma levels reach maximum after 15 to 60 min [27]. In rats, anthocyanins are absorbed from the stomach and also from the small intestine, and the absorption efficiency varies depending on the structure of the anthocyanins. Some anthocyanins can reach the large intestine in significant amounts and undergo extensive decomposition catalyzed by colonic microbiota [21]. Absorption of anthocyanins through the gastric wall typically ranged from 11% for malvidin-3-glucoside to 22% for cyanidin-3-glucoside [13]. Anthocyanins have relatively low oral bioavailability and are capable of crossing the blood–brain barrier [28]. In animal studies, the systemic bioavailability of anthocyanins was estimated to be 0.26–1.8% [21][29][30][31][32]. In mice fed with a diet containing 0.5% bilberry extract for two weeks, plasma levels of anthocyanins reached a maximum of 0.26 μmol/L and anthocyanins were detected in the liver, kidney, testes, and lung but not the brain, heart, muscle, eyes, or white fat, suggesting that bilberry anthocyanins are absorbed and distributed in specific organs [33]. It has been reported that urinary excretion of anthocyanins was very low (0.005–0.1% of intake), suggesting pronounced biliary excretion or extensive metabolism of the compounds [34]. In humans, anthocyanins are cleared rapidly and after 6 h, very little is detected in the plasma [35]. Several studies have demonstrated improved plasma antioxidant status after consumption of berries [36][37], suggesting that berry components with antioxidant activity are bioavailable.

Bilberry has been recognized as a Class 1 herb by the American Herbal Products Association, meaning it is considered safe to consume when used appropriately [11]. An open pilot trial with bilberry preparation has included safety, tolerability, side effects and patient satisfaction in the analysis and reported no serious clinical adverse events nor alternations in the safety laboratory parameters [50]. No known adverse effect of bilberry and bilberry extract has been reported in other studies [39][40][45]. Due to the anti-platelet activity of bilberry, patients taking a chronic high dose of concentrated bilberry extract in combination with anti-platelet drugs should be monitored for hemorrhagic disorders. Bilberry has no known interactions with other drugs.

More
© Text is available under the terms and conditions of the Creative Commons Attribution (CC BY) license; additional terms may apply. By using this site, you agree to the Terms and Conditions and Privacy Policy.
Upload a video for this entry
Information
Subjects: Cardiac & Cardiovascular Systems
Contributors MDPI registered users' name will be linked to their SciProfiles pages. To register with us, please refer to https://encyclopedia.pub/register :
Sze Wa Chan
,
Brian Tomlinson
View Times: 107
Entry Collection: Hypertension and Cardiovascular Diseases
Revisions: 3 times (View History)
Update Date: 15 Jul 2022
Table of Contents
1000/1000
Hot Most Recent