+1 point
Thank you for your contribution! You can also upload a video entry related to this topic through the link below: https://encyclopedia.pub/user/video_add?id=24819
Check Note
2000/2000
Therapies for Pancreatic Ductal Adenocarcinoma

Pancreatic cancer is the fourth leading cause of cancer-related mortality worldwide, with a five-year survival rate of less than 8%. It can be classed into endocrine and exocrine tumours with PDAC, a form of exocrine pancreatic cancer, the most common form. The high mortality rate associated with PDAC is primarily due to delayed diagnosis and tumour resistance to chemotherapy. A broad range of non-specific symptoms are associated with PDAC such as abdominal pain, jaundice, dry/itchy skin, steatorrhoea, and bilirubinuria. Surgery is the primary treatment option, with chemotherapy being administered as adjuvant therapy in select cases.  Resistance to chemotherapy has become a critical problem in the treatment of PDAC, with most patients displaying resistance patterns.

Currently, chemotherapy is the main form of treatment for unresectable PDAC tumours [1]. More commonly known as gemcitabine, 2′,2′-difluorodeoxycytidine is an antimetabolite drug that inhibits DNA synthesis during the S phase of the cell cycle (Figure 1A) [2]. Gemcitabine is utilised as mono- or combination therapy (with capecitabine or albumin-bound nanoparticle paclitaxel (nab-paclitaxel)) in the treatment strategies of several stages of PDAC including locally advanced PDAC, metastatic PDAC, and as adjuvant therapy in resectable cases [3]. Treatment with gemcitabine alone yields dismal results with progression-free survival (PFS) of 3.9 months (95% CI, 3.0–5.1) and overall survival (OS) of 9.2 months (95% CI, 8.3–10.4) [4]. 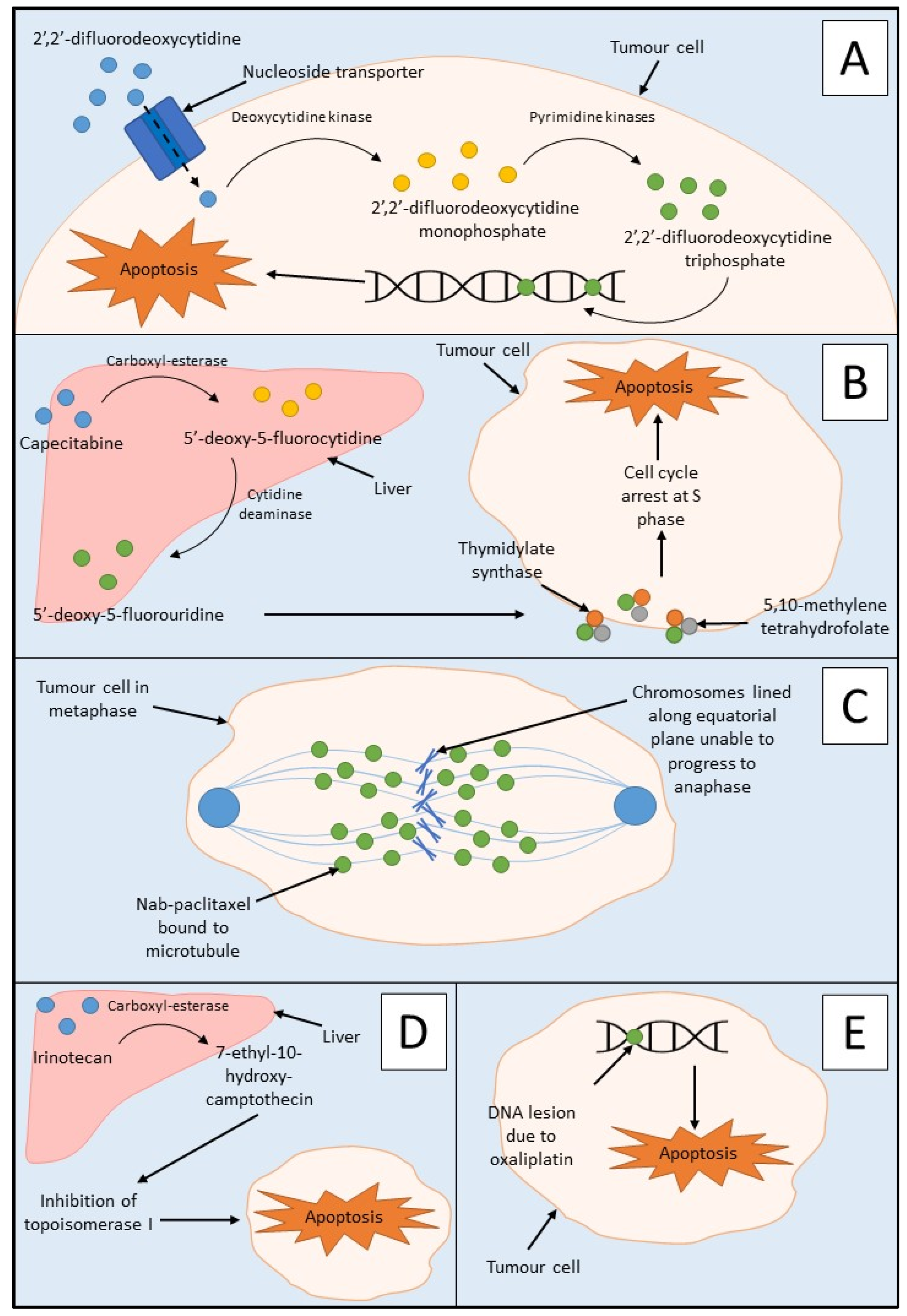 Synthetic lethality is used to define an interaction between two genes in which a mutation of one is viable; however, a mutation of both leads to cell death, as outlined in Figure 2A [12][13]. It can also involve a mutation only being synthetically lethal if it is combined with another specific mutation. These synthetically lethal interactions can be described as gain-of-function alleles or loss-of-function alleles, with the most common being the latter [14]. Loss-of-function alleles can be categorised based on their protein product′s function; for example, they could have an essential function, be a subunit of a protein complex, or play a role in protein folding pathways. Synthetic lethality has proven successful in the treatment of BRCA1/2-mutated neoplasms which are sensitive to poly(ADP-ribose) polymerase (PARP) inhibitors [15]. PARP is an enzyme which is involved in the repair of single-strand DNA breaks (SSBs) [13]. Inhibition of PARP will lead to irreparable SSBs and, therefore, a one-ended double-stranded DNA break (DSB) via the collapse of a replication fork. Neoplasms containing a loss-of-function mutation of either the BRCA1 or BRCA2 gene lack homologous recombination; therefore, DSB results in cell death [13]. Due to this aspect, synthetic lethality is believed to be a possible route for potential anticancer drugs in the treatment of PDAC via the proteins produced by potential synthetically lethal genes with mutations [14]. However, commonly occurring loss-of-function mutations in PDAC such as those in CDKN2A, TP53, and SMAD4 are currently not targetable due to the many genetic aberrations, mainly point mutations, associated with each gene [16]. 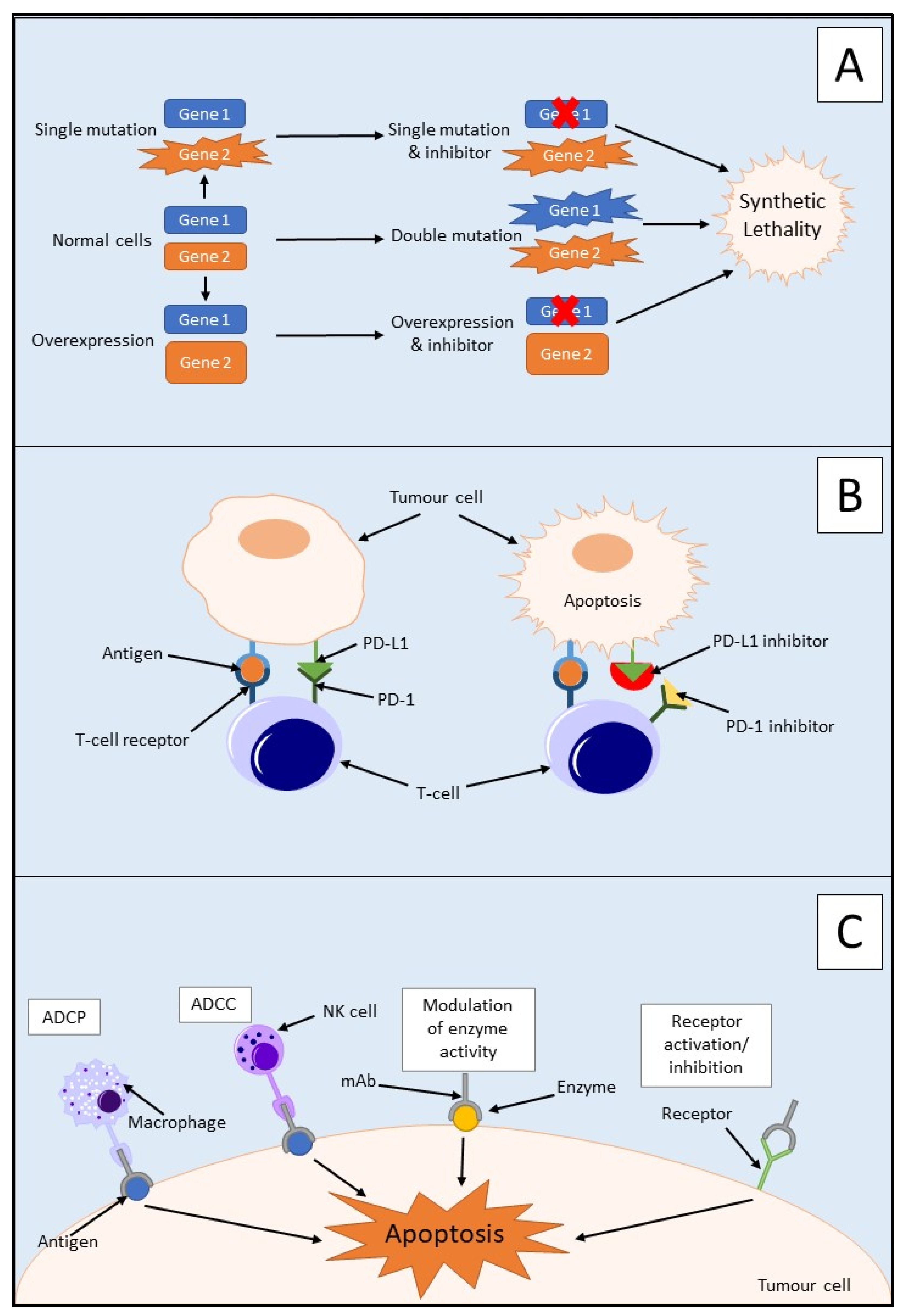 Figure 2. Mechanism of action of three PDAC immunotherapies: (A) the mechanism of synthetic lethality showing normal cells, single mutation, or overexpression of one gene is viable for a cell but inhibition of one gene and mutation in the other, a double mutation, or overexpression of one gene and inhibition of the other leads to cell death via cell viability; (B) mechanism of action of immune checkpoint inhibitors, for example, PD-1 and PD-L1. Binding of PD-1 and PD-L1 inhibits activation of T cells. Upregulation of both PD-1 and PD-L1 in tumour cells makes them an ideal target for inhibition leading to the activation of T cells; (C) mechanism of action of monoclonal antibodies (mAbs) in cancer treatment. mAbs may be used to target different molecules in the treatment of cancer, for example, receptors, antigens, or enzymes. Receptors on macrophages may target Fc portions of antigen-bound mAb and engulf tumour cells through antibody-dependent cellular phagocytosis (ADCP). Receptors on natural killer (NK) cells may also target Fc portions of antigen-bound mAb and imitate antibody-dependent cellular cytotoxicity (ADCC).

With the issue of growing resistance to current PDAC treatments, new and more targeted therapies are required to improve the prognosis of patients. As previously mentioned, the TME plays a major role in intrinsic resistance to chemotherapeutic drugs. Immunotherapy is the use of treatments and therapies that target and stimulate an immune response to combat cancer [17]. There are several different forms of immunotherapy available such as the use of immune checkpoint inhibitors, monoclonal antibodies, adoptive cell transfer, and vaccination. Research into the use of these immunotherapeutic strategies for several different solid tumours, including PDAC, has increased over recent decades, due to its outstanding success in the past [17]. With approximately 25% of breast cancer cases positive for human epithelial growth receptor 2 (HER2), the monoclonal antibody trastuzumab has forged a new path in the treatment of this malignancy [18]. Another example is rituximab, an anti-CD20 monoclonal antibody that is a cornerstone drug in the treatment of B-cell malignancies such as non-Hodgkin lymphoma and chronic lymphocytic leukaemia [19].

Immune checkpoint inhibitors are an immunotherapeutic strategy that activates the immune system to modulate the immune response to cancer [20]. This occurs through the stimulation of the innate and adaptive immune systems, with the main focus on the activation of T cells.

Programmed death-1 (PD-1) is an immune checkpoint protein that is activated by its ligand PD-L1 and is expressed by activated T cells [21]. PD-L1 is a membrane protein that is expressed on immune and tumour cells and inactivates T cells by inducing programmed cell death via heterodimer formation with CD80 [22][23]. Overexpression of PD-L1 has been detected in several cancers, including PDAC, and this overexpression is associated with advanced tumour stage and, therefore, a poorer prognosis for patients [21][24]. PD-L1 blockade alone has been shown to display minimal inhibition in PDAC and, therefore, is not regarded as a sufficient therapeutic target alone. This could be due to the non-immunogenic nature of PDAC or immunosuppression due to the high tumour burden [21].

Due to the poor success of immune checkpoint inhibitor monotherapy in PDAC, potential combination therapies are being sought to improve its efficacy. Cancer Forkhead box protein 3 (cFOXP3) is an upregulated protein in PDAC and plays a vital role with regulatory T cells and immune evasion in cancer [25]. It achieves this through the recruitment of cFOXP3 positive regulatory T cells to the site of malignancy via upregulation of C–C chemokine ligand 5 (CCL5). PD-L1 expression in PDAC has been shown to coexist with regulatory T-cell infiltration of tumours. This suggests a possible link between PD-L1 and cFOXP3 expression [25].

Adoptive cell transfer is the transfer of immune cells into a patient as a form of therapy to improve the patient’s immune system. The use of natural killer cells as a form of adoptive cell transfer therapy has recently become a point of interest in the field of immunotherapy [27]. This is due to their ability to target and eliminate tumour cells via cytotoxic mechanisms and the role they play in inducing an adaptive immune response. In the pre-cancerous stages of PDAC, there is a loss of natural killer cells due to mutations in KRAS. This could be due to their involvement in the initiation and progression of PDAC.

Any tumour cells remaining post-surgery/treatment could lead to a relapse of the PDAC tumour [28]. Therefore, vaccination yields a possible approach to target remnant tumour cells via activation of the immune system toward tumour-associated antigens. The whole tumour cell lysate was utilised by processing murine PDAC tumour membranes to enable them to be opsonised by naturally occurring human IgG antibodies [28]. This can stimulate the immune system to target tumour associated antigens, in this case, galactose-alpha-1,3-galactose (α-gal). An immune response was mounted against the PDAC tumour lysate vaccine, resulting in antitumour properties in murine models. A statistically significant median OS was observed with mice treated with PDAC tumour lysate and α-gal of 95.0 days (95% CI, 69–95), compared with the untreated control mice of 40.0 days (95% CI, 35–45) (p < 0.01). This shows a potential route of treatment for PDAC which could be utilised in the future [28].

At present, there are a plethora of clinical trials recruiting patients that involve the treatment of PDAC. Many of these studies involve the utilisation of immunotherapies, in particular, monoclonal antibodies in combination with another form of therapy such as conventional chemotherapy. A study currently recruiting in the Cancer Centre at Johns Hopkins University which aims to determine the effects of pembrolizumab which could be given in combination with defactinib in patients with resectable PDAC as a form of neoadjuvant or adjuvant therapy [29]. Pembrolizumab is a monoclonal antibody directed towards PD-1, and this may or may not be administered intravenously alongside defactinib, a focal adhesion kinase inhibitor. Focal adhesion kinase is a non-receptor tyrosine kinase that is involved in cell scaffolding and signalling at the sites of integrin clustering on the cell membrane [30]. The effects of these drugs will be determined in combination with standard neoadjuvant and adjuvant chemotherapy regimens such as gemcitabine [29]. It will determine if the tumour microenvironment can be reprogrammed via targeting focal adhesion kinase post-chemotherapy and, therefore, potentiate anti-PD-1 effects to halt cancer progression [29].

More
© Text is available under the terms and conditions of the Creative Commons Attribution (CC BY) license; additional terms may apply. By using this site, you agree to the Terms and Conditions and Privacy Policy.
Upload a video for this entry
Information
Subjects: Oncology
Contributors MDPI registered users' name will be linked to their SciProfiles pages. To register with us, please refer to https://encyclopedia.pub/register :
Aine Sally
,
Ryan McGowan
,
Karen Finn
,
Brian Michael Moran
View Times: 210
Revisions: 2 times (View History)
Update Date: 02 Sep 2022
Table of Contents
1000/1000
Hot Most Recent