+1 point
Thank you for your contribution! You can also upload a video entry related to this topic through the link below: https://encyclopedia.pub/user/video_add?id=24675
Check Note
2000/2000
Antifungal/Antibacterial Activity of Peppermint Oil and Cornmint Oil

The genus mint (Mentha) belongs to the Lamiaceae family and includes 42 species, 15 hybrids, and hundreds of subspecies, varieties, and cultivars, which potentially crossbreed when in proximity. Different mints are known for a reasonably high content of essential oils (EO), which are deposited in the glandular trichomes, mostly located on the adaxial surface of their leaves. There are two well-known, so-called menthol mints in cultivation: Mentha x piperita L. (Hudson): peppermint—MP, and Mentha arvensis L., (syn. M. canadensis L., Japanese mint): cornmint—MA.

The genus mint (Mentha) belongs to the Lamiaceae family and includes 42 species, 15 hybrids, and hundreds of subspecies, varieties, and cultivars [1], which potentially crossbreed when in proximity. Different mints are known for a reasonably high content of essential oils (EO), which are deposited in the glandular trichomes, mostly located on the adaxial surface of their leaves [2]. There are two well-known, so-called menthol mints in cultivation: Mentha x piperita L. (Hudson): peppermint—MP, and Mentha arvensis L., (syn. M. canadensis L., Japanese mint): cornmint—MA [3].
MP originates from the Mediterranean region and is a natural hybrid between M. viridis (M. longifolia x M. rotundifolia) and M. aquatica [4]. It has higher yields in the temperate climate regimes of higher precipitation levels. A widely cultivated botanical form of MP is Mentha x piperita L. var. officinalis Sole f. rubescens (Camus), called black or English MP, which has violet stems and leaves [5][6]. MP can be grown as a sole crop or intercropped with other species [7][8][9]. A recent study showed that the inclusion of MP in crop rotation can negatively affect a succeeding maize, which may result from the allelopathic interactions of MP [10], possibly due to changes in the quantitative and qualitative profiles of EO during its decomposition in the soil [11].
MA originates from the temperate climates of Europe and western and central Asia. It has higher yields under the subtropical conditions of Asia [12][13]. MA is usually included in the crop rotation with different crop species as it reacts well to intercropping and green manuring [14].
The popularity of MP and MA cultivation results from a wide application of both herbs and essential oils. Due to the biological quality of the raw material obtained from plantations, and its use for medicinal purposes, ecological cultivations of both menthol mints are recommended [15][16][17][18][19][20].
The menthol mints contain many biologically active compounds, with EOs being a significant part of them. The biological interactions of the menthol mints with the other components of agrobiocenoses, i.e., weeds or insect pests, have been observed for a long time. Recently, the investigation of the menthol mints EOs as natural (aka botanical) pesticides is being carried out. Peppermint essential oil is already exempt from the Federal Insecticide, Fungicide, and Rodenticide Act (FIFRA) as a pesticide formulation, alone or in combination with other ingredients [21].
Nowadays in agriculture there is a growing interest in botanical pesticides with the active ingredient composed of natural compounds, among them EOs [22][23]. This is due to two major factors. Firstly, the misuse of synthetic pesticides has resulted in the rise of a number of pesticide-resistant organisms, which are also posing a significant threat to the diversity of ecosystems [24][25].

2. Content and Chemical Composition of Peppermint Oil and Cornmint Oil

Essential oils are multicomponent mixtures of secondary plant volatiles produced by steam- or hydrodistillation of different plant parts, with the exception of citrus peel oils, which are produced by expression. The main constituents of essential oils belong to the mono- and sesquiterpenes, which are classified into hydrocarbons, alcohols, aldehydes, ketones, esters, and ethers. Essential oils are limpid, oily liquids that dissolve well in ethanol, unpolar organic solvents, and lipids, and are insoluble in water.
MPEO and MAEO containing the same major constituents, namely menthol and menthone, are among the most produced and marketed essential oils all over the world. The main producers of MPEO are India, the USA, and China, and of MAEO China, India, Brazil, and Japan [26][27]. The oils are obtained by hydrodistillation of the fresh or partly dried flowering herb with a yield of 0.3–0.7%. In both EOs about 300 constituents were identified. The main constituents of MPEO are menthol (20–60%), menthone (5–35%), menthyl acetate (1–20%), and menthofuran (0.1–15%). MAEO is dominated by menthol (above 60%) and menthone (4–18%). Menthol is separated from this oil by crystallization and the remaining oil has an appearance and odor resembling MPEO. The dementholized MAEO is used as a cheap alternative to MPEO, but it is easily recognized organoleptically because of its harsh flavor.
Both menthol-rich mint oils have monographs in the European Pharmacopoeia 5 (EP 5) [28] as Peppermint oil and Mint oil partly dementholized, respectively. EP 5 defines mint oils as colorless, pale yellow, or pale greenish-yellow liquids with a characteristic odor. EP 5 establishes the limits of 10 key components in peppermint oil determined by GC analysis: menthol (30.0–55.0%), menthone (14.0–32.0%), isomenthone (1.5–10.0%), menthyl acetate (2.8–10.0%), menthofuran (1.0–9.0%), 1,8-cineole (3.5–4.0%), limonene (1.0–5.0%), isopulegol (max. 0.2%), pulegone (max. 4.0%), and carvone (max. 1.0%). The limits of these compounds in dementholized cornmint oil are similar: menthol (30–50%), menthone (17–35%), isomenthone (5.0–13.0%), menthyl acetate (1.5–7.0%), 1,8-cineole (max. 1.5%), limonene (1.5–7.0%), isopulegol (1–3%), pulegone (max. 2.0%), and carvone (max. 2.0%). The structures of the main constituents of menthol mint oils are presented in Figure 1. 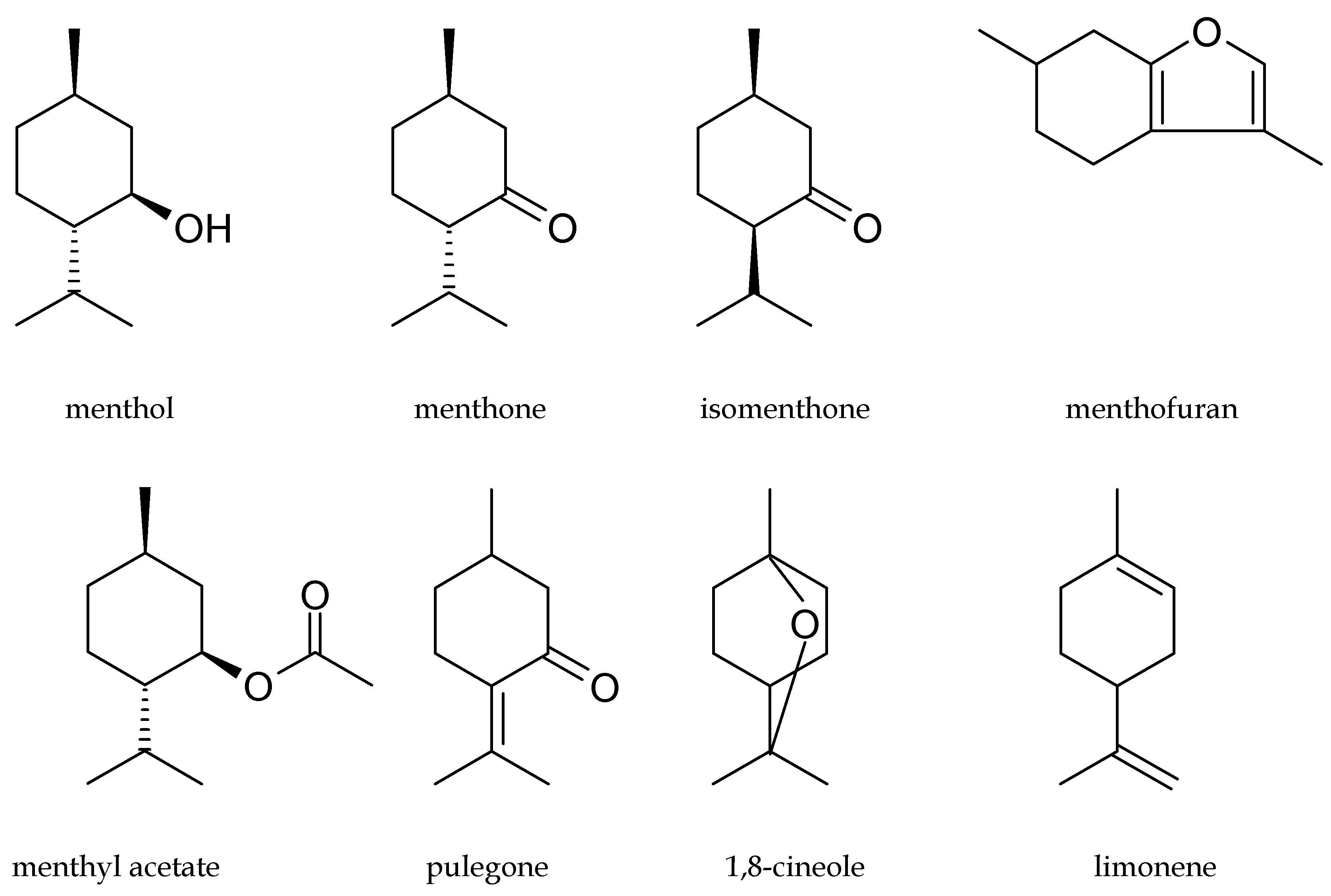 Figure 1. Structures of the main components of menthol mint essential oils.
The yield as well as the qualitative and quantitative composition of MPEO differs in relation to cultivar, geographic origin, and condition of cultivation (temperature, water, fertilizers), and strongly depend on the time of harvest. At the beginning of ontogenesis, the herb contains menthone (40–55%) as a main compound and lower amounts of menthol (20%). During shoot growth, the menthol content starts to increase, reaching more than 40%, while the menthone content decreases. At the flowering stage, the content of two other constituents, namely menthofuran and pulegone, which adversely influence peppermint oil quality, increases and diminishes after flowering, while the content of menthol and menthyl acetate increases to levels higher than 50% and 7%, respectively [29]. The conditions of growth of MP in cultivation may additionally affect the quality of MPEO. For example, organic fertilizers promote the production of EO of a higher amount of menthol and a decreasing amount of menthofuran and pulegone [30][31]. The amount of menthol can also be increased as a result of microbial activity in the MP’s rhizosphere. For example, an increase in the number of native rhizospheric strains of bacteria Pseudomonas putida and their microbial volatile organic compounds stimulated MP’s shoot growth and reduced the content of menthofuran in the EO, with a simultaneous induction of menthol production [32]. A similar effect brought about the arbuscular mycorrhizal inoculation of soil with Funneliformis mosseae, which, when applied alongside foliar-sprayed natural humic substances, promoted the biochemical activity of MP plants [33].
The rhizosphere of MA is also rich in several different strains of mycorrhizal fungi, which positively influence the production of MAEO, specifically the menthol content. Interestingly, the highest production of menthol was achieved when MA plants were inoculated with Trichoderma viride [34].
Menthol is a monoterpene alcohol with three chiral carbon atoms and occurs in eight stereoisomes. In both mint oils, (−)-(1R,3S,4S)-menthol, called menthol, is dominant. Three dextrorotatory menthol isomers, (+)-(1S,3R,4S)-isomenthol, (+)-(1R,3R,4R)-neomenthol, and (+)-(1R,3R,4S)-neoisomenthol, are present in the oils in smaller amounts. Out of four stereoisomers of appropriate ketone, (−)-(1R,4S)-menthone dominated over (+)-(1R,4R)-isomenthone.
In a recent review on the genus Mentha, previous literature data on MPEO and MAEO composition were reported [1]. Only five MPEOs met the requirements of EP 5 in respect of the main constituents’ percentages. Five oils have components from the EP 5 list as the main constituents, but in different proportions. The other oils were composed of totally different compounds. In two of them, carvone and limonene were the main constituents, as in M. spicata oil, while in three oils linalool and linalyl acetate dominated. Similarly, among the three MAEOs there were oils dominated by menthol/isomenthone, menthol/pulegone, or linalool/linalyl acetate [1].

3. Biological Activity and Application of Peppermint Oil and Cornmint Oil

MPEO is the most important of the mint oils because of its exceptional properties [26][35][36]. It is also the most extensively used oil in therapy, both internally and externally, being recommended for the treatment of acute and chronic gastritis and enteritis, in disorders of the respiratory tract, and for inflammation of the oral mucosa [26]. The biological activity of menthol mint oils is due to the content of their main constituent menthol, which is used as an individual phytochemical in the treatment of respiratory pathologies. Both MPEO and menthol are ingredients in numerous medications.
MPEO possesses a fresh, minty flavor and cooling effect. Due to these properties and its antimicrobial activity, it is also widely used in chewing gums, toothpastes, and mouthwashes, and as a fragrance in perfumes, soaps, and air refreshers, where it is often replaced by a cheaper, dementholized MAEO.

4. Antifungal and Antibacterial Activity of Peppermint Oil and Cornmint Oil against Phytopathogens

More
© Text is available under the terms and conditions of the Creative Commons Attribution (CC BY) license; additional terms may apply. By using this site, you agree to the Terms and Conditions and Privacy Policy.
Upload a video for this entry
Information
Subjects: Agronomy
Contributors MDPI registered users' name will be linked to their SciProfiles pages. To register with us, please refer to https://encyclopedia.pub/register :
Danuta Kalemba
,
Agnieszka Synowiec
View Times: 340
Revisions: 2 times (View History)
Update Date: 30 Jun 2022
Table of Contents
1000/1000
Hot Most Recent