+1 point
Thank you for your contribution! You can also upload a video entry related to this topic through the link below: https://encyclopedia.pub/user/video_add?id=24547
Check Note
2000/2000
Marine Resources for the Omicron SARS-CoV-2 Variant

In November of 2021, a recently evolved variant of SARS-CoV-2, omicron, was discovered. In just one month, omicron has spread to more than 89 countries resulting in a rapid rise in cases and a new wave of infections. With over 46 mutations, omicron brings concern to the public health and may be able to infect at a greater capacity than previous strains. Although able to infect double vaccinated and previously infected individuals, the booster vaccine may prove promising. However, more research is needed to fully elucidate the key function of each mutation and to better develop effective drugs. Marine resources may be a promising drug discovery avenue to investigate. Through viral entry blockade and preventing viral replication and protein synthesis, metabolites produced from marine organisms may be promising against the evolving SARS-CoV-2.

Severe Acute Respiratory Syndrome Coronavirus 2 (SARS-CoV-2) first emerged almost two years ago and has been ongoing since [1]. It is without a doubt that the SARS-CoV-2 pandemic has led to frustration and prevalent negative effects on the mental wellbeing of individuals as well as the economy [2][3][4]. Vaccinations were effective at first, however, the solution was temporary, and the single-stranded SARS-CoV-2 virus is continuously evolving through mutations in key domains [5][6][7][8]. Several SARS-CoV-2 variants including the alpha, beta and delta strains were associated with new waves of COVID-19 infection [9][10]. The delta variant was shown to have a higher transmissible and infectious risk than other strains with reports of having a higher viral load and mutations granting a better immune response escape [11][12][13].
On 24 November 2021, a new SARS-CoV-2 variant, known as omicron (B.1.1.529) was reported to World Health Organization (WHO) [14]. The omicron variant was first reported on 11 November 2021, in Botswana and just a few days later, was identified in South Africa [15][16]. To date (January 2022), omicron has been reported in more than 57 countries, with South Korea reporting its highest number of COVID-19 cases in December 2021, since the start of the pandemic [17]. It has not been elucidated whether the transmissibility and severity status of the omicron variant is greater than the previous strains [18][19]. Over 45 mutations and several gene deletions have been identified, some in the same genes as the previous variants and others being novel (Figure 1) [20]. Together, these mutations in key regions give the omicron strain the ability to escape the host immune system, rendering vaccinations less effective [20][21]. Furthermore, it is not clear yet what the effects of several mutations are, and this serves as a barrier for developing new vaccinations or drugs for prevention and treatment of omicron viral infection [22][23]. 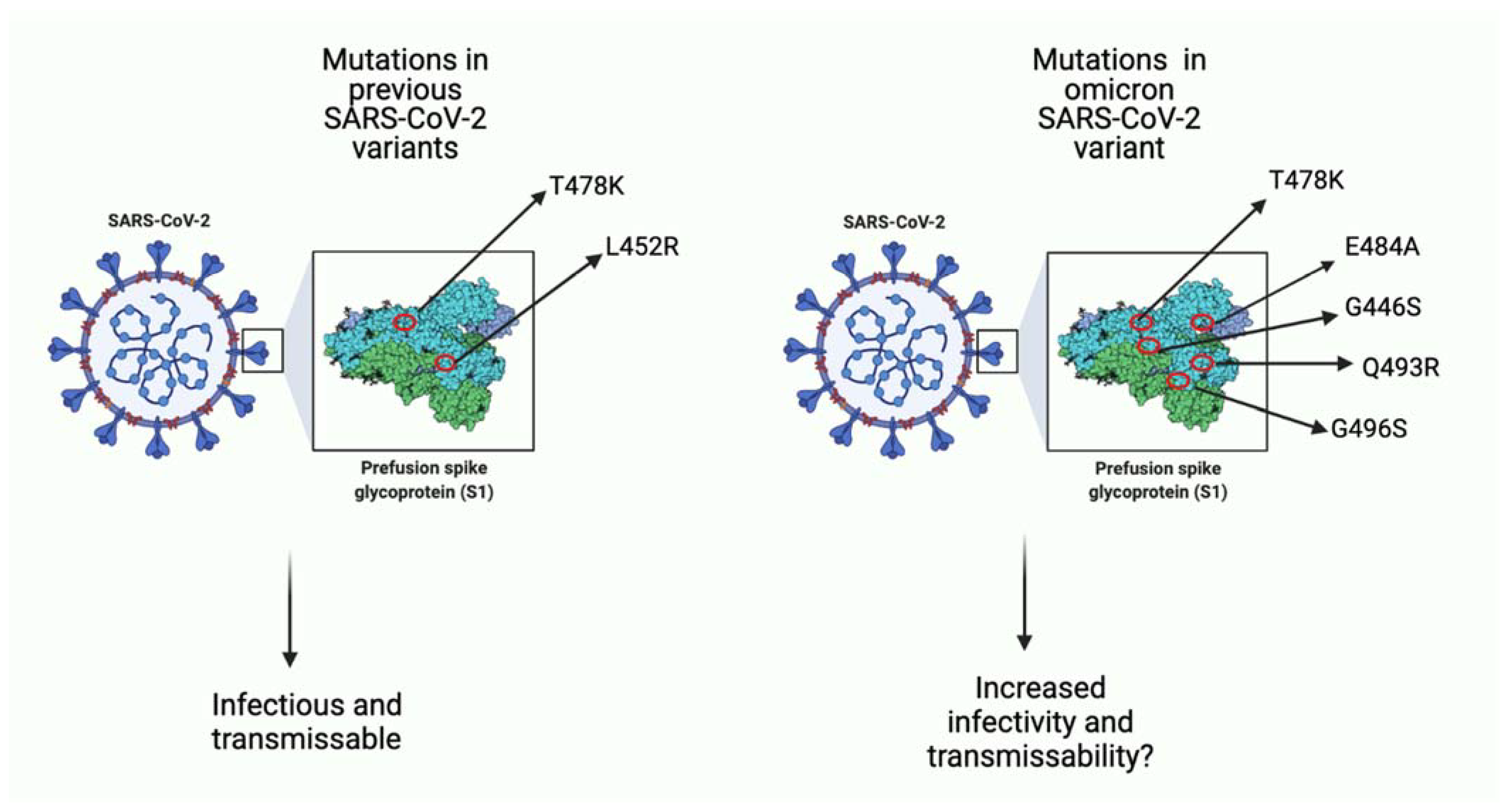 Figure 1. A comparison of few key missense mutations in the spike protein of previous SARS-CoV-2 variants and the omicron variant. As seen in the image on the left, previous variants (i.e., delta variant) had few mutations that favored viral infection. Seen on the right, omicron has more mutations, many of which function to increase binding affinity to host ACE-2 receptor and potentially increase infectivity ability as well as transmissibility of viral particles. Some mutations such as T478K overlap with previous variants, and some (i.e., E484A) are unique to omicron. (Created with BioRender.com (accessed on 19 December 2021)).
Previous variants have shown to lower the efficacy of vaccinations. For example, the efficacy of the AstraZeneca ChAdOx1 vaccine decreased to 10% in South Africa because of the beta SARS-CoV-2 variant [19]. The re-purposing of drugs used for anti-bacterial infections or other anti-viral infections may be a promising avenue to investigate. Marine resources have a variety of molecules that have shown to have anti-viral abilities and their repurposing for treatment against omicron may be promising [24][25][26]. Specifically, inorganic polyphosphate has been shown to inhibit viral life cycle at several stages by blocking viral particle spike protein binding to host ACE-2 receptor and inhibiting viral protein synthesis once inside the cell [26][27]. Similarly, lambda-carrageenan isolated from marine algae have also been shown to inhibit viral protein transcription and translation [28]. Moreover, bromotyrosines have also been shown to have anti-bacterial and anti-viral activity, and have recently been isolated and purified for further research [24][29]. Although some challenges are ahead such as large-scale production and more in vivo studies necessary for further development, more research is warranted to determine the full potential of marine metabolites against SARS-CoV-2 variants.

2. The Potential for Prevention/Treatment of SARS-CoV-2 Variants Using Marine Resources

Considering the rapid rise in cases as well as the continuously evolving SARS-CoV-2 virus, there needs to be more effective vaccinations and drugs to prevent and treat not only the omicron variant but other future variants as well. One such drug discovery avenue to investigate is marine resources [30][31][32]. Marine resources harbor significant activity against cancer, viruses and bacteria, thus their ability to prevent or treat omicron viral infection should be investigated [29][33][34][35][36]. In fact, marine resources, which can be isolated from invertebrates and cultivated under farming conditions (i.e., sponges) [37][38], are highly advantageous over synthetic compounds as they lack religious constraints, have little to no toxins, are environmentally friendly and are metabolically compatible [24]. Furthermore, marine compounds isolated from a single organism can often combat several stages of the viral life cycle, including both viral entry and replication [39] (Figure 2). 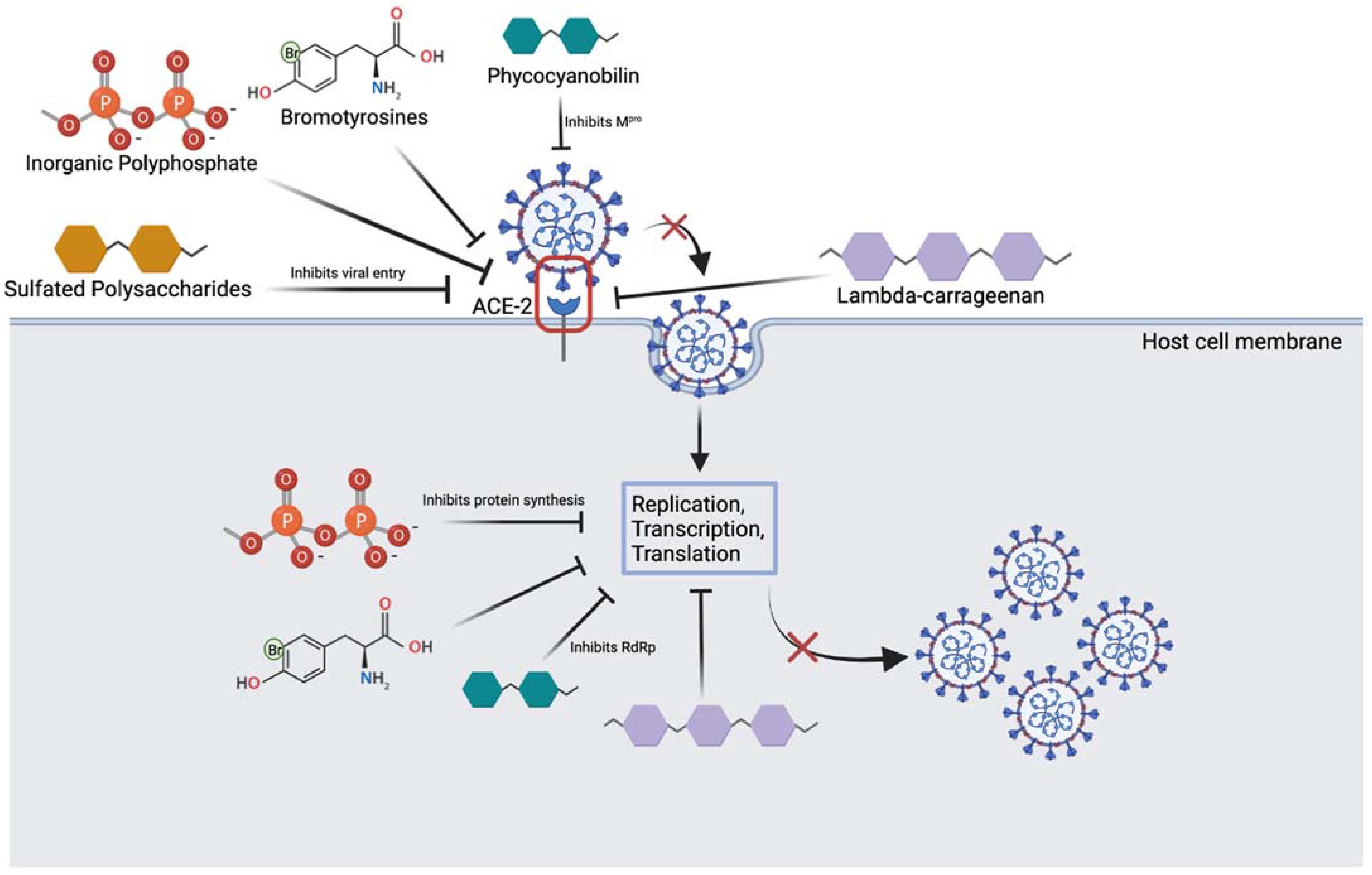 More
© Text is available under the terms and conditions of the Creative Commons Attribution (CC BY) license; additional terms may apply. By using this site, you agree to the Terms and Conditions and Privacy Policy.
Upload a video for this entry
Information
Subjects: Biochemistry & Molecular Biology
Contributor MDPI registered users' name will be linked to their SciProfiles pages. To register with us, please refer to https://encyclopedia.pub/register :
Azizur Rahman
View Times: 157
Entry Collection: COVID-19
Revisions: 2 times (View History)
Update Date: 29 Jun 2022
Table of Contents
1000/1000
Hot Most Recent