Submitted Successfully!
Thank you for your contribution! You can also upload a video entry related to this topic through the link below:
https://encyclopedia.pub/user/video_add?id=245
Check Note
2000/2000
PP2A during Mitosis in Yeasts
Edit
Upload a video
This entry is adapted from 10.3390/ijms21010264

Cell cycle regulation is largely based on protein phospho-dephosphorylation events, catalyzed by cyclin dependent kinases (Cdks) and phosphatases (PPases), respectively. During many years the Cdks were considered the main component of the cell cycle control system. Recently, the importance of the counteracting PPases has emerged. Research on yeast has provided many insights into such contribution. Here we present an overview of the protein phosphatase 2A family's roles during mitosis.

At the metaphase to anaphase transition, the APC/CCdc20 (anaphase promoting complex) promotes the proteasomal destruction of cyclin B driving the inactivation of the mitotic Cdk1[1] and the separase (Esp1) inhibitor, securin[2][3][4] (Pds1 in budding yeast). Active separase promotes sister chromatids segregation by cleaving the Scc1 subunit of the cohesin complex and triggers mitotic exit through Cdc14 activation[5][6]. PP2ACdc55 prevents the untimely activation of the mitotic exit in different ways: by the adaptation to the spindle assembly checkpoint, regulating the cohesin cleavage and by inhibiting Cdc14 release from the nucleolus (Figure 1). Later on, during late anaphase PP2A regulate the mitotic exit network (MEN in budding yeast or SIN in fission yeast). 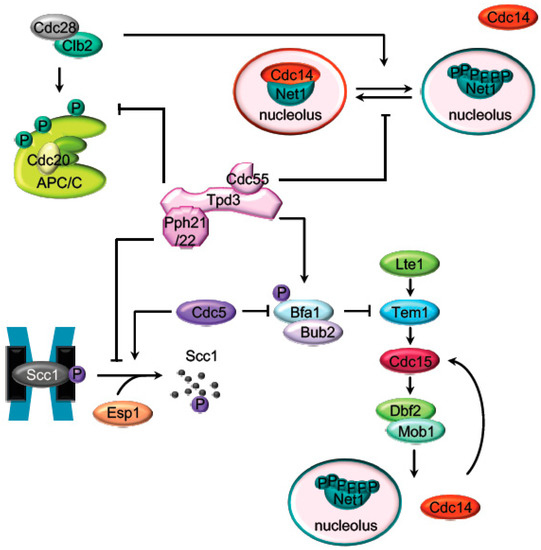 2. The APC Dephosphorylation by PP2ACdc55

Cdc28–Clb2 phosphorylates the APC subunits Cdc16, Cdc23, and Cdc27 upon spindle damage conditions to activate APC[7][8]. The phospho-null mutants for these proteins[9] and the inactivation of Cdc28[10] impaired APC/CCdc20 activity. Conversely, PP2ACdc55 counteracts the Cdk1 phosphorylation of the APC/C subunit Cdc16[11][10], keeping the spindle checkpoint assembly (SAC) active until the cell is prepared for anaphase. Tight balance between Cdc28–Clbs and PP2ACdc55 activities is important for the adaptation to the spindle checkpoint[10].

3. The Regulation of the Cohesin Cleavage by PP2ACdc55

The first described mitotic function of PP2ACdc55 was its role in the activation of the phosphatase Cdc14 during anaphase. Cdc14 is kept sequestered in the nucleolus by its binding to the nucleolar protein Net1 during most of the cell cycle. At anaphase, Net1 is phosphorylated by the mitotic kinases Cdk1–Clb2 and polo-like Cdc5[17][18][19]. Phosphorylated-Net1 has low affinity toward Cdc14, and the phosphatase is translocated, first to the nucleus during early anaphase and to the cytoplasm in late anaphase. Early anaphase Cdc14 release is regulated by separase in conjunction with a series of proteins (Slk19, Spo12, Fob1, Cdc5, Cdk1–Clb2, Cdc55, and Hit1)[20][17][21][22][23][24][25][26] commonly known as the FEAR pathway (the cdcfourteen early anaphase release (FEAR)).

PP2ACdc55 is also required for the proper temporal initiation of meiotic events[28]. Similar to mitosis, PP2ACdc55 also regulates the FEAR pathway during meiosis[29][30]. PP2ACdc55 dephosphorylates Net1 and promotes Cdc14 release from the nucleolus, preventing precocious exit from meiosis I. In addition, PP2ACdc55 is required for reductional chromosome segregation in the absence of recombination independently of its role in the FEAR pathway[31].

Cdc14 activation and release during anaphase is mediated by two parallel pathways: the FEAR and the mitotic exit network (MEN)[32]. MEN (also known as the Hippo pathway in higher eukaryotes) is a GTPase-driven signaling cascade  (spindle pole body, SPB in yeast) that regulates mitotic exit, enables the control of the spindle orientation, and promotes cytokinesis in budding yeast.

The core of the MEN cascade consists of two serine/threonine kinases, Cdc15 (PAK kinase in higher eukaryotes) and Dbf2-Mob1 (LATS kinase in higher eukaryotes). They are activated in mid–late anaphase to maintain Cdc14 released from the nucleolus and promote its full activation[33][34][35]. During an unperturbed cell cycle, the inhibitor complex Bub2/Bfa1 keeps MEN inactive. PP2ACdc55 contributes to keep Bub2/Bfa1 active by dephosphorylating Bfa1 in metaphase[36]. When cells reach anaphase with a correct aligned mitotic spindle, Cdc5 phosphorylates Bfa1 and inactivates the Bub2/Bfa1 GAP activity[37][38]. The anaphase-specific inactivation of PP2ACdc55 also contributes to increase the Cdc5-dependent Bfa1 phosphorylation and promotes the activation of MEN. Therefore, PP2ACdc55 not only facilitates the FEAR-dependent Cdc14 release in early anaphase but also contributes to alleviation of the MEN inhibitory signal imposed by Bfa1/Bub2.

Figure 2. Multiple roles of PP2A regulating MEN and SIN pathways. The cartoon shows the different PP2A holoenzymes and their substrates regulating MEN during mitosis in S. cerevisiae and SIN in S. pombe during septation.

Although PP2ACdc55 is the main PP2A regulating mitotic exit, PP2ARts1 was also described to regulate MEN upon activation of the spindle position checkpoint (SPOC). The activation and functionality of SPOC depend on the ability of Bub2/Bfa1 to inhibit MEN. Phosphorylation of Bfa1 by Kin4 prevents the Cdc5-dependent phosphorylation of Bfa1, keeping MEN inactive[38][45][46][47]. PP2ARts1 phosphatase is a SPOC component acting upstream of Kin4. PP2ARts1 dephosphorylates Kin4, regulating the association of Kin4 to the SPBs, and thereby restraining MEN activity[48].

The MEN pathway is closely related to the septation initiation network (SIN) in Schizosaccharomyces pombe and the Hippo pathway in mammals. Their most conserved role is the regulation of cytokinesis. At the core of the SIN pathway, Sid1-Cdc14 is the PAK-like kinase (Cdc15) and Sid2-Mob1 is the LATS-kinase (Dbf2-Mob1). Two additional kinases, the polo-like Plo1 and the Ste20-family Cdc7 are also part of the SIN pathway. Mutations of the PP2A regulatory subunits (Pab1 and Par1) and the major catalytic subunit Ppa2 rescue conditional SIN mutants[49][50][51], suggesting that PP2A inhibits SIN signaling (Figure 2). PP2APab1 inhibits the SIN pathway[49] and, similar to S. cerevisiae, it has been proposed that the main candidate to be the target of PP2APab1 is the GAP Byr4-Cdc16 (Bub2/Bfa1 in S. cerevisiae)[49]. The other PP2A holoenzyme, PP2APar1/2, regulates the localization of the Cdc7 kinase inhibiting SIN, in order to avoid multiple rounds of septation[50][51][52].

Finally, PP2APab1 and PP2APar1 are also regulated by the PP1-like phosphatase Dis2. PP1 binds to and activates PP2APab1 through a conserved RVXF motif present in Pab1, the B55 subunit. Active PP2APab1 dephosphorylates Par1 and promotes PP1 recruitment, which in turn further activates PP2APar1 phosphatase. In this way, PP1-induced activation of both PP2AB55 and PP2AB56 coordinates mitotic progression and exit from mitosis[53].

More
© Text is available under the terms and conditions of the Creative Commons Attribution (CC BY) license; additional terms may apply. By using this site, you agree to the Terms and Conditions and Privacy Policy.
Upload a video for this entry
Information
Subjects: Microbiology
Contributor MDPI registered users' name will be linked to their SciProfiles pages. To register with us, please refer to https://encyclopedia.pub/register :
Ethel Queralt
View Times: 388
Revisions: 4 times (View History)
Update Time: 23 Oct 2020
Table of Contents
1000/1000
Hot Most Recent