+1 point
Thank you for your contribution! You can also upload a video entry related to this topic through the link below: https://encyclopedia.pub/user/video_add?id=23846
Check Note
2000/2000
Types of Electrochemical Energy Storage Devices

Researchers are increasingly paying attention to sustainable methods for storing energy. Many researchers are now concentrating their efforts on the development and exploration of novel materials for use in energy storage devices due to the limited supply of existing energy sources such as oil, coal, and natural gas, and escalating regional tensions. Because of these issues, sustainable renewable energy sources have been touted as an alternative to nonrenewable fuels. Deployment of renewable energy sources requires efficient and reliable energy storage devices due to their intermittent nature. High-performance electrochemical energy storage technologies with high power and energy densities are heralded to be the next-generation storage devices. Transition metal chalcogenides (TMCs) have sparked interest among electrode materials because of their intriguing electrochemical properties.

An electrochemical battery energy storage solution is required for our sustainable future. For decades, rechargeable batteries have been transforming the battery industry. These rechargeable batteries, including Li-ion, Pb–acid, Ni metal-hydride, and Ni-Cd batteries, dominate the global market. Lithium-ion batteries are currently the norm in the battery industry. Li-ion batteries are made up of four major components: a cathode, an anode, an electrolyte, and a separator. This is depicted in Figure 1. 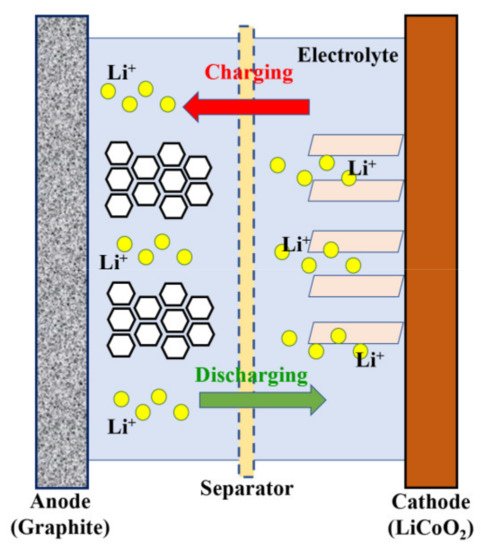 Figure 1. Schematic of the structure and working mechanism of Li-ion batteries.
While graphite is often used for the anode electrode, lithium metal oxides or phosphates, such as LiCoO2 and LiFePO4, are commonly used for the cathode electrode. In order to maintain charge balance, electrons migrate from the anode to the cathode during discharge, which implies Li-ions flow through the electrolyte and cross over the separator. On the other hand, the charging process is triggered by a charging power source, which causes the Li ions to migrate in the opposite direction [1]. As previously mentioned, one of the most important components of electrochemical Li-ion batteries is the electrode materials, which significantly impact battery performance. Therefore, it is important to review the role of chalcogenides in the synthesis and design of appropriate electrode material for high-performance Li-ion batteries. A closely related lithium element is sodium (group 1 element). Hence sodium-ion batteries have been investigated as an alternative sustainable energy storage solution. Because Na-ion has a larger atomic radius compared to Li-ion, they are expected to migrate at a slower rate [2]. However, reports demonstrated that the migration barrier could be shortened for a layered structured system [3][4][5].
Figure 2 illustrates the structure of Na-ion batteries showing the materials for the four major components: a cathode, an anode, an electrolyte, and binders. Investigating the potential of Na-ion batteries as an alternative electrochemical energy storage device is critical in the development of sustainable, innovative storage systems. 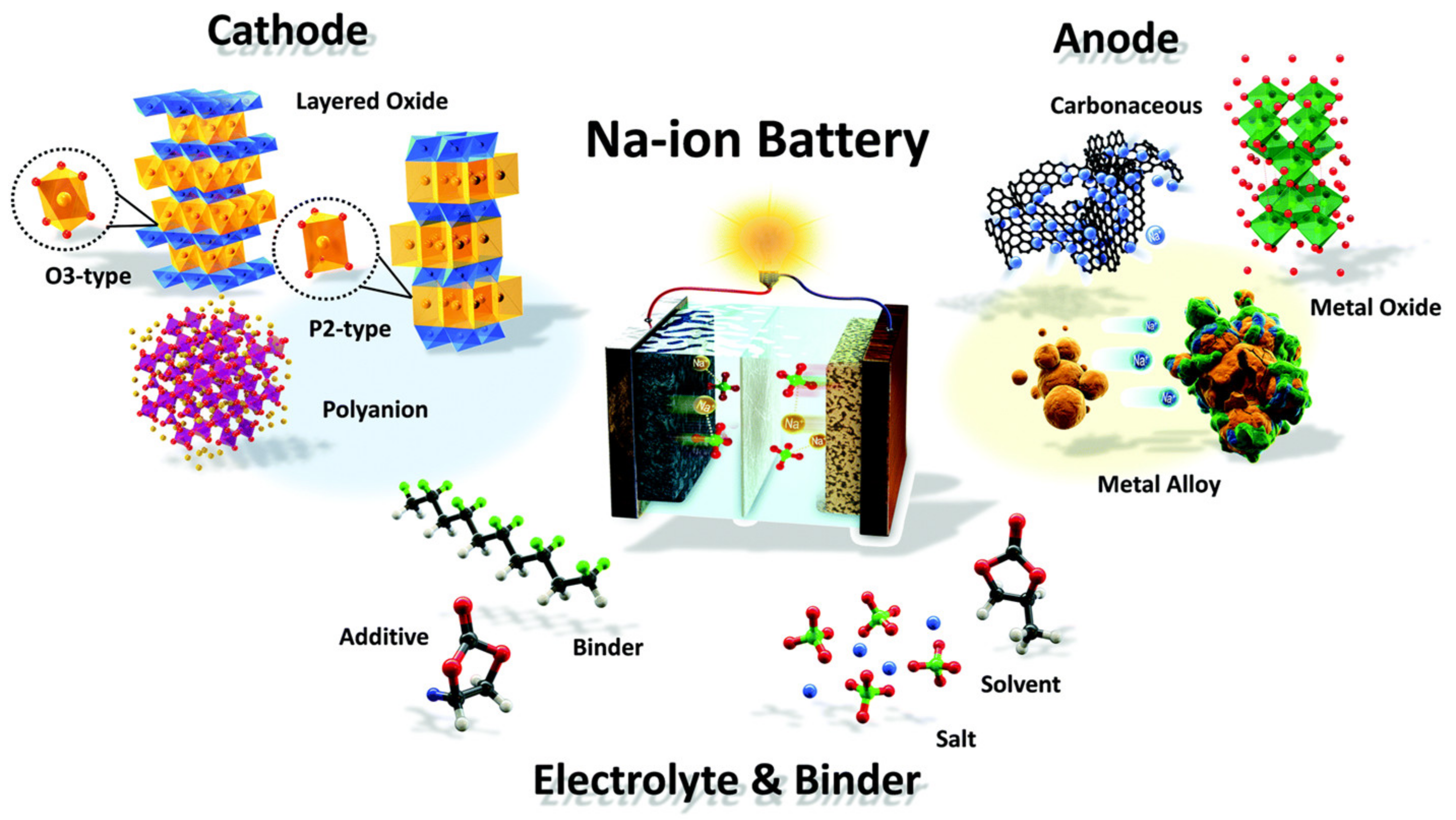 Figure 2. Schematic of the structure and illustration of a Na-ion battery system.
While investigating the electrochemical performance and environmental friendliness of several new electrode materials, most Na-ion batteries and, to a large extent, Li-ion batteries focused on transition metal sulfides-based materials such as cobalt sulfides, and iron sulfides, nickel sulfides, and tin sulfides. The storage of Na-ions in metal sulfide materials depends on the transition metal elements that are present in the metal sulfide materials. Developing new electrode materials with specific structures necessitates a thorough understanding of Na-ion transport properties in various electrode materials. The importance of understanding the role of chalcogenides in the synthesis and design of acceptable electrode materials for high-performance Na-ion batteries cannot be overstated.
As with so many other battery energy storage solutions for our sustainable future, there is a continuing desire for new technologies with higher storage capacities and fewer demands on critical minerals. Metal–Sulfur batteries have recently received significant attention [7]. In theory, lithium-sulfur batteries, for example, could store five times as much energy as lithium-ion batteries. Similar to other electrochemical batteries, lithium-sulfur batteries are made of two electrodes (lithium anode and sulfur cathode), a separator, and an electrolyte (either solid or liquid). The fundamental charging and discharging process is depicted in Figure 3, and it is governed by the equation S+2Li→Li2S. From Figure 3, lithium metal is oxidized to Li+ at the anode, and sulfur is reduced to lithium sulfide (Li2S) at the cathode during the discharge process. Lithium-sulfur batteries have several drawbacks, the most significant of which are their short cycle life, low utilization of active materials, early failure due to electrical shorting, and anode rechargeability. Another considerable drawback that has received more attention is the suppression of the polysulfide shuttle in lithium-sulfur batteries. According to a study, the effects of polysulfide shuttle can be mediated by including polysulfide absorbent and mediators as part of the cathode material [8]. Several strategies have been used to suppress polysulfide shuttle effects, including the use of electrolyte additives at the anode, the use of porous layers to impede diffusion, the use of a selective electrolyte separator, and the encapsulation of polysulfides at the cathode [9][10]. 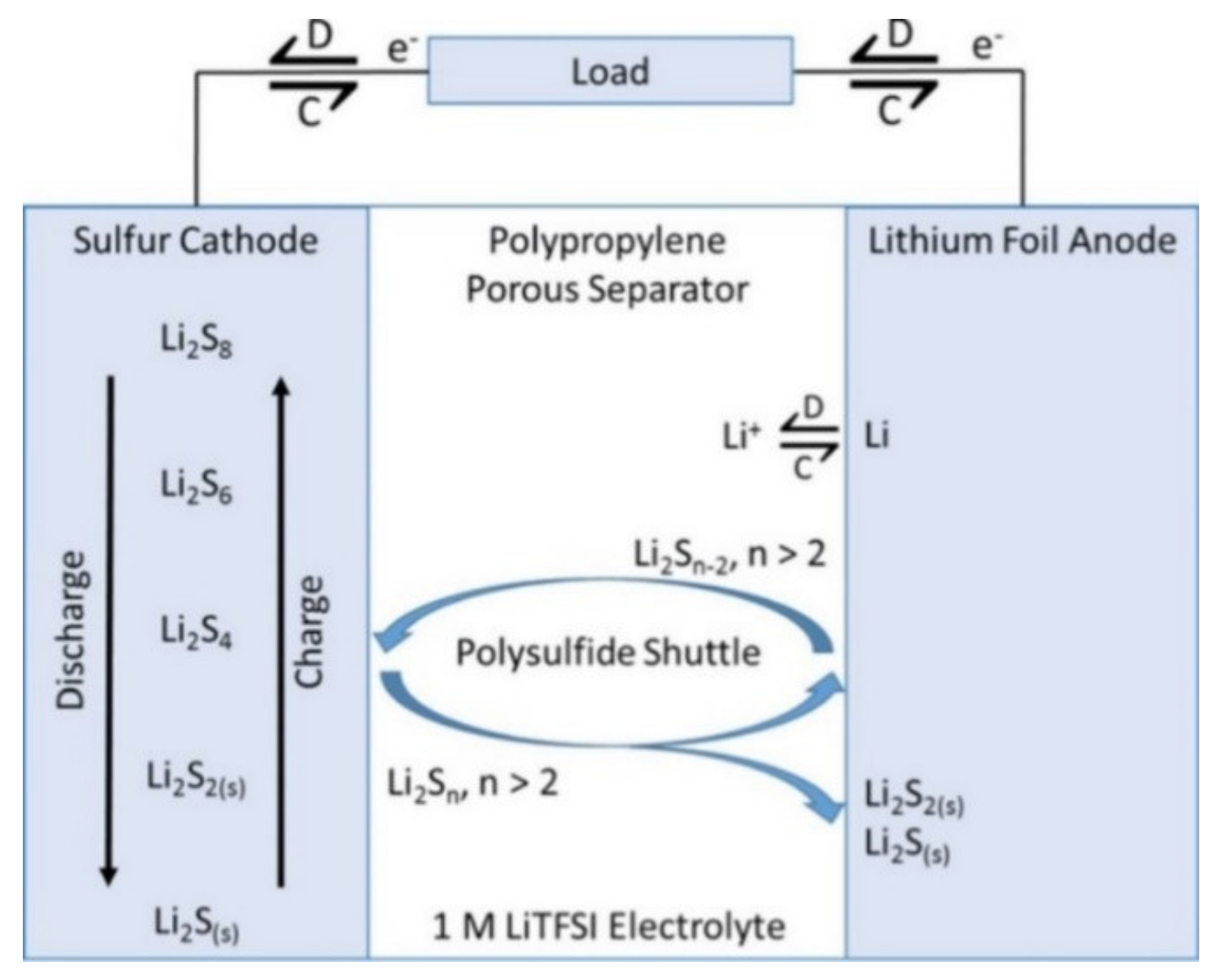 Figure 3. Schematic diagram of a Li–S cell structure with charge/discharge operations.
The ideal material for electrochemical energy storage must exhibit superior electrochemical properties. The electrochemical performance of electrode materials is mostly determined by the composition and structure/morphology of the materials. There has been a lot of interest in electrocatalysts of chalcogenides because of their intrinsic electrochemical activities [11][12]. Transition metal dichalcogenide (molybdenum disulfide) was utilized as a catalyst in a study to convert polysulfides into a sulfur cathode because of its inherent sulfur deficiencies. Nanocomposites of MoS2−x nanoflakes were created on thin films of reduced graphene oxide utilizing co-dispersion and filtration processes. The steps in the preparation of MoS2−x/rGO are depicted in Figure 4. Surface sulfur deficiency at the cathode had a favourable effect on the kinetics of polysulfide shuttling. As a result, the nanocomposite sulfur cathode with only a small amount of MoS2−x/rGO (4%) exhibited a high-rate capability and a long cycle life. This emphasizes the importance of designing cathode material composition and structure/morphology to improve the electrochemical performance of emerging technologies [13]. 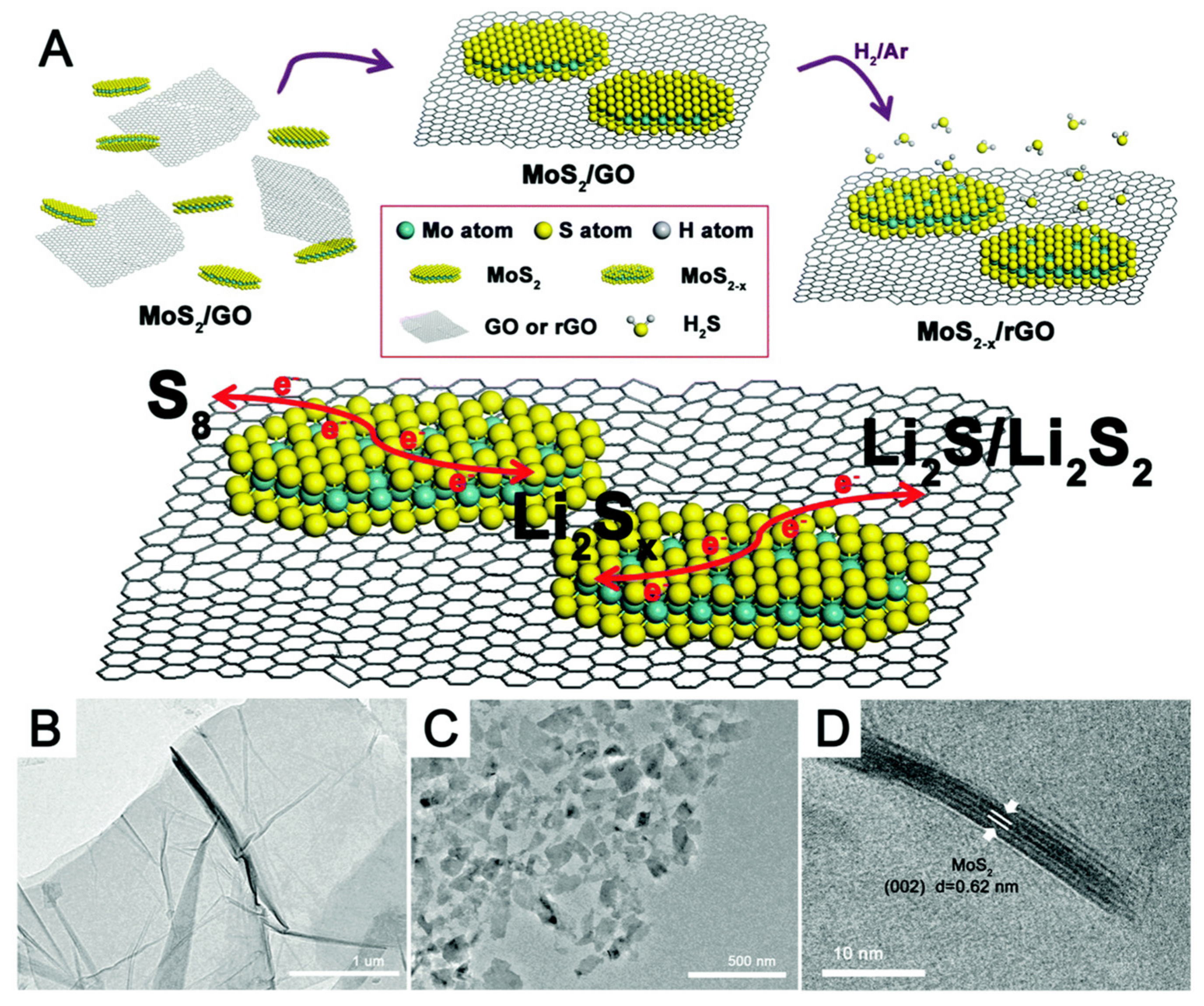 Figure 4. (A) Schematic of the synthesis of the MoS2−x/rGO composite and the conversion of Li2Sx on the MoS2−x/rGO surface. TEM images of (B) a thin GO film and (C) MoS2 nanoflakes. (D) HRTEM image of MoS2 nanoflakes.
Metal–Air batteries have also demonstrated enormous potential in the field of electrochemical energy storage systems. A conventional metal-air battery consists of a metal electrode, an air-breathing cathode, and a lithium salt-containing electrolyte. The anode of metal-air batteries can be made using low-cost, environmentally friendly elements, such as Fe, Na, Al, and Zn. Metal–Air batteries are both safer and offer comparable energy density. Figure 5 shows the theoretical energy density and specific energy of commonly published metal-air batteries. 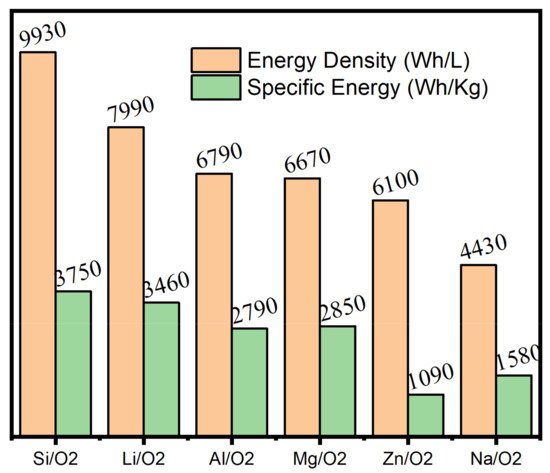 Figure 5. Theoretical energy density and specific energy (including oxygen) of commonly researched metal-air batteries.
In a conventional metal-air battery structure (Figure 6), metal is converted to ions at the anode, while oxygen is transformed into hydroxide ions at the cathode. The utilization of air (ambient oxygen) has the extra benefit of lowering costs and simplifying cell construction. Metal–Air batteries such as Li-air battery [15][16], Na–air battery [17][18], Al–air battery [19][20], Mg–air battery [21][22], Zn–air battery [23][24], Fe–air battery [25][26][27]. Sn–air battery has widely been published, and the electrochemical performance and prospects of improved specific power and specific energy are well established. Indeed, the prospects of using metal chalcogenides as a possible anodic material offer a green and sustainable solution. In this vain, Lyu et al. [28] used a hybrid CoS2/rGO cathode catalyst to fabricate Li–O2 batteries. The electrodes exhibited high-rate performance. Furthermore, cobalt sulfide nanoparticles coated on graphene nanosheets have been shown to produce Zn–air batteries with outstanding cycling stability and high rechargeability [29]. 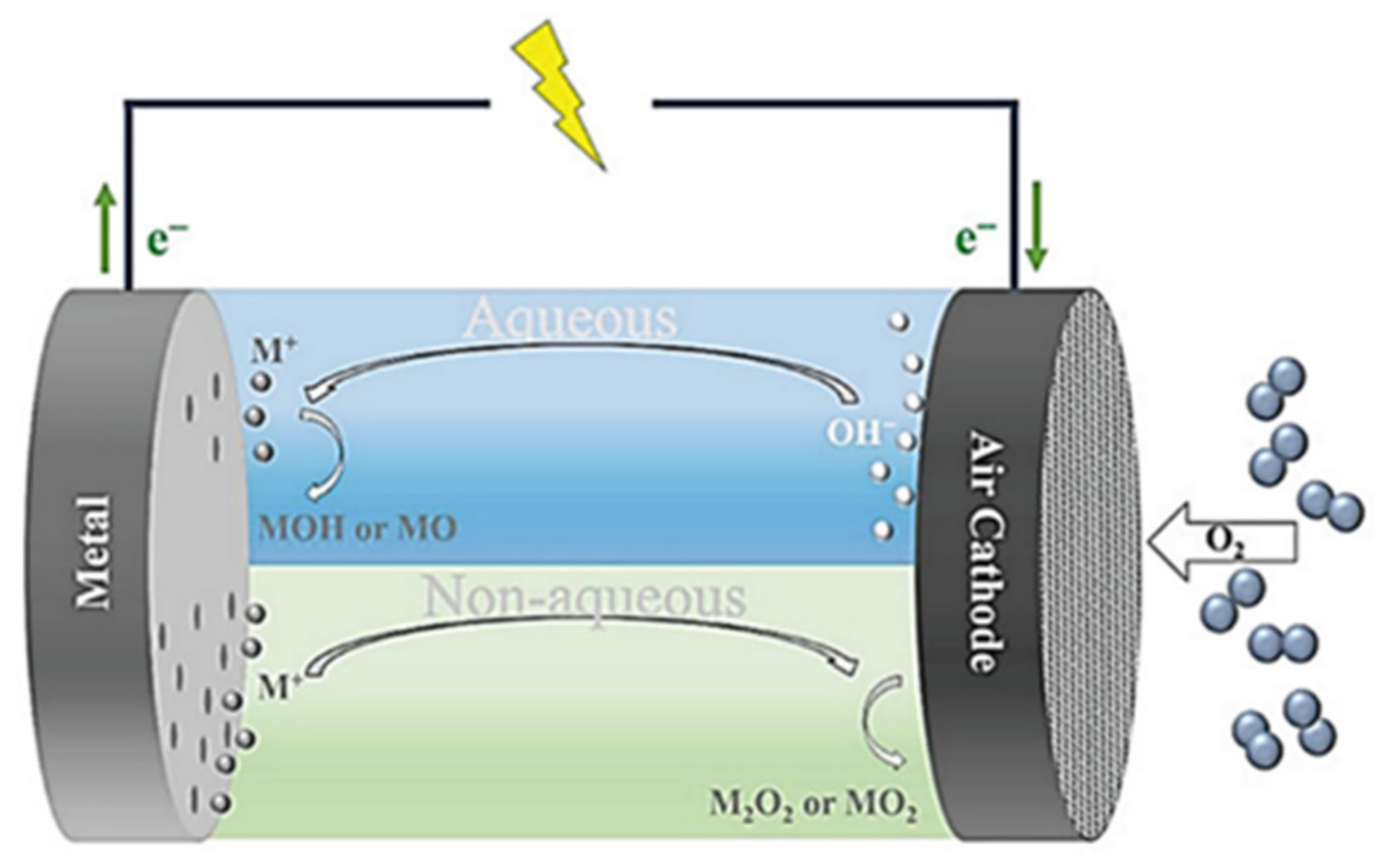 More
© Text is available under the terms and conditions of the Creative Commons Attribution (CC BY) license; additional terms may apply. By using this site, you agree to the Terms and Conditions and Privacy Policy.
Upload a video for this entry
Information
Subjects: Others
Contributors MDPI registered users' name will be linked to their SciProfiles pages. To register with us, please refer to https://encyclopedia.pub/register :
Kwadwo Mensah-Darkwa
,
Ram K. Gupta
,
Daniel Nframah Ampong
,
Emmanuel Agyekum
,
Felipe Martins de Souza
View Times: 364
Revisions: 2 times (View History)
Update Date: 09 Jun 2022
Table of Contents
1000/1000
Hot Most Recent